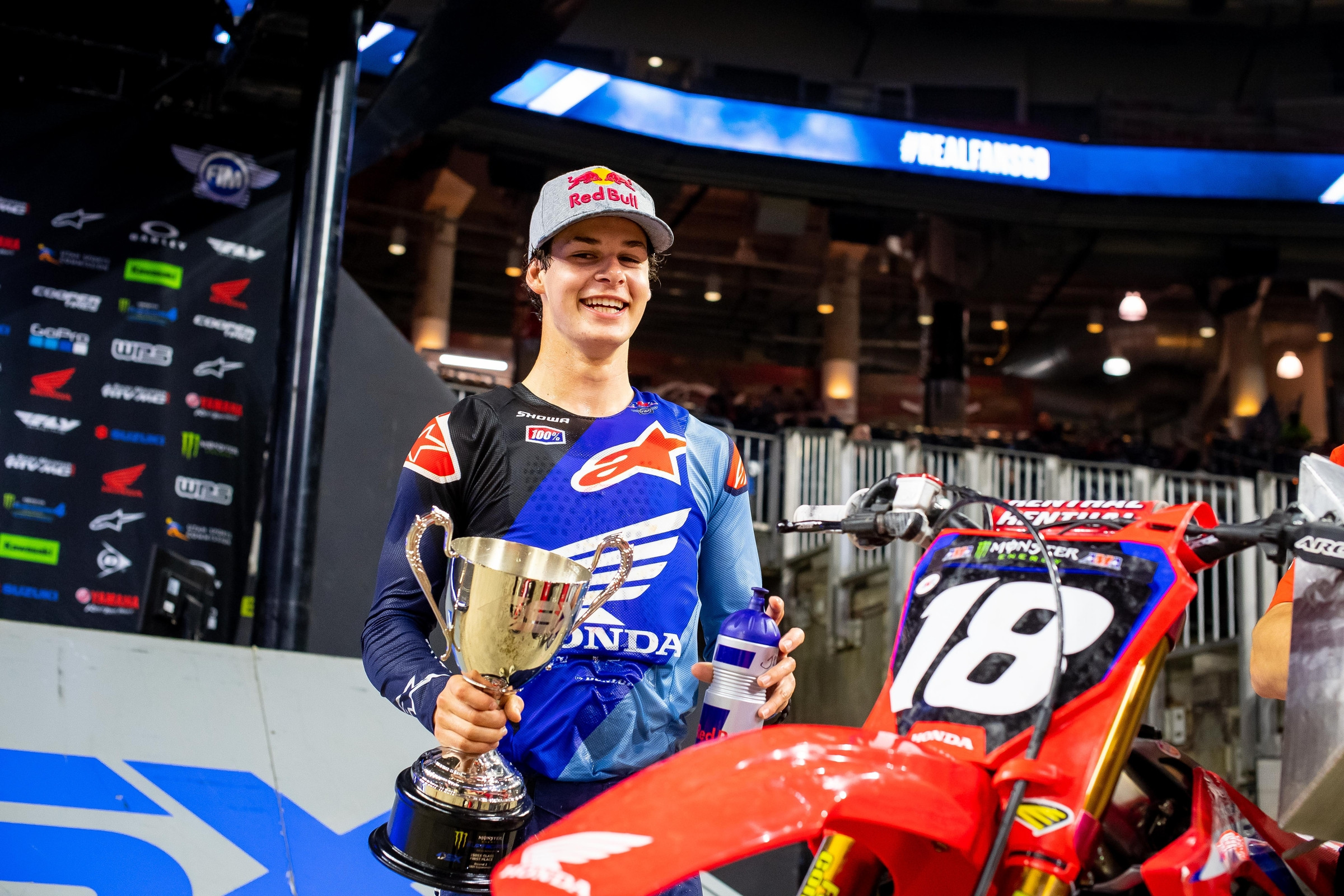 On Tuesday night in Houston, Texas, Honda HRC’s Jett Lawrence lived up to his billing as he dominated the second round of the series for his first career 250SX class victory. The win came just over a year after he nearly won the third round of the series before crashing and breaking his collarbone on the finale lap. Now Lawrence has that elusive victory behind him, and he spoke to the media following the race.

Racer X: Everyone has been hyping you up obviously. Just the way you are and your personality. Have you been feeling any of that at all before tonight? I know you like to keep things kind of loose, but have you felt any of that pressure, just knowing that the industry has been kind of hyping you up and kind of waiting for this moment?
Jett Lawrence: No. I’ve kind of tried to keep away from that because obviously it can blow your head up pretty big. Obviously when you don’t do what they expect you to, it can mess with you mentally a bit. I’ve known I’ve kind of had it in me for a while, but it’s just like they say. "When is it going to happen? Is the night going to all click together" and that stuff? And tonight, was just that night.

I’ve heard of a heel clicker, a one-hander, fist pump, all these things. What was that called that you did after your heat race win? What do you call that?
That move is called the, “I don't know what to do” move. It didn’t really click in that I won the heat race until I hit the jump. I looked at the crowd and I’m like, “What do I do?” I don’t feel like I fist pump because it’s a heat race. So, I just did bar hop. Let’s just go with that for right now!

Obviously, huge support from fans in Australia, and really popular all over the world now. Can you believe that you're a winner in supercross? Where to from here? Can you challenge for the title?
It’s definitely good to get this first win out. I think I’m third in the championship now, which is good from going from sixth in the first round. I think I’m four points off or something. It’s really good to get this first win out of the way because now obviously they always say the first win is the hardest one to get, and now the rest are definitely not easy but they’re definitely going to be not as hard as that first one, not as much of a long wait. It’s really cool. This one was special because obviously A2 was 366 days ago, so it was really cool to kind of do it around the same time as there. It definitely meant a lot.

Trying to get a look at the bikes in the pits as you guys were rolling by, I noticed what looked like maybe a sensor or some lights on the thing. Are you guys running any kind of traction control or is there anything new you’re testing on the rear?
That’s under the radar. That’s some HRC stuff that we didn’t really get at GEICO. [Laughs] No, I’ve got no idea. You’re asking the wrong guy for the testing part. I just go and ride the bike. All I’ve got to know is that it has two wheels and they’re a circle. That’s all I got to know.

Jett, what changed from round one? Did you change anything major on the bike? Was it just a mental thing?
On last Saturday, the bike setting was still not there. The rear was really overpowering the front and we made a few changes today. We were still kind of changing the clickers until the last practice and ended up finding the right setting. When they bring the red flag out, from there I just felt like I was just at the practice track. Felt like I was flowing really good. Obviously to get the heat race win, obviously that changes your mental a lot more than it would just getting a second or third. I came in with the same mental as Saturday. Just confident in my setting on the bike. It’s just the same, old me. Nothing has really changed. I really gelled with the track today and just clicked off my laps.