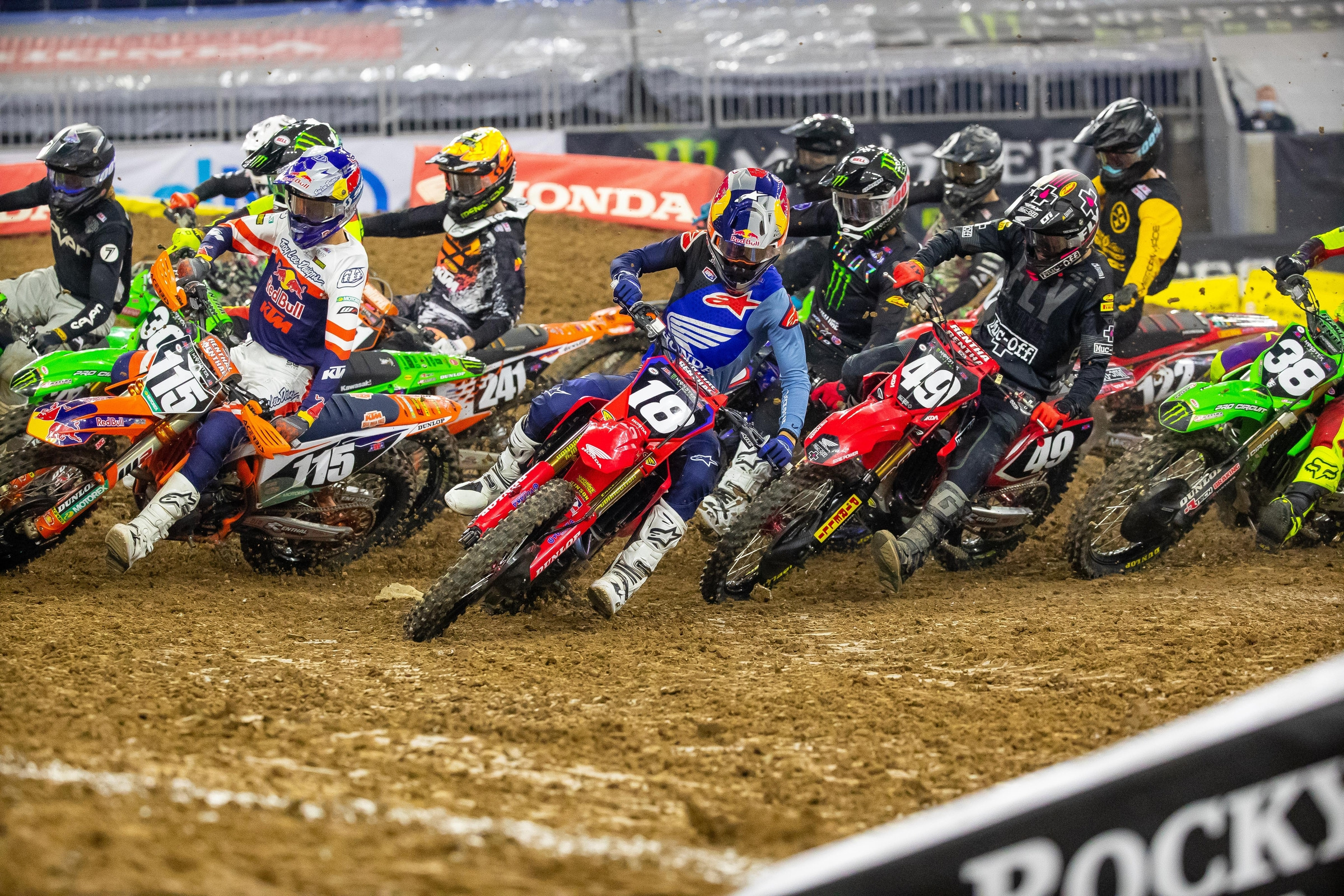 Round two of the 2021 Monster Energy AMA Supercross Championship took place on Tuesday in Houston, Texas, and before the third round takes place on Saturday, we fired off questions for one of our editors-at-large, Jason Thomas. JT spent nearly 16 seasons as a professional supercross racer himself. Here’s his insight on the second go round from the Lonestar State.

I went back and watched this a few times and after review, I am placing less blame on Forkner now than I had originally. Yes, he went in there to make an aggressive pass. The X factor here was the timing, though. Going through the prior rhythm section, RJ had a decent lead over Forkner. That gap gave RJ a false sense of security entering the next corner, so he set up for an aggressive cut down on exit. Had he known Forkner was close enough to force a move, he would have protected the inside more and also not drawn such a tight exit arc. Forkner still gets the blame but the timing of the incident played a bigger role than I had first thought.

Forkner goes for the pass! 👀 #SupercrossLIVE#DropTheGatepic.twitter.com/OvxKA10rSL

What did you think of Jett Lawrence’s day?

It was a statement day, no doubt. After a subpar opener, he showed everything that he really can do what everyone thought he could do. Scary day for anyone hoping to beat him in the next few years.

Though the sand section did create options, it also took several victims. What were your thoughts on the location and use of sand?

As a rider, I was not a fan. I just didn’t see any upside and it adds a lot of risk for crashes, goggle issues, etc. As a fan, though, it certainly adds excitement. There were multiple crashes there all day and night, some unfortunately worse than others. It’s a dangerous sport so there will always be risk but the sand seems to up the ante for drama.

Eli Tomac and Cooper Webb both seemingly had off days all the way until the main event, and maybe not even until the second half of the main. Are they "fixed" now?

I’m not there yet, especially for Webb. Tomac won the race but it wasn’t the dominant win that many would expect given the circumstances. They were both better than round one but to be “fixed”, I want to see a convincing display of superiority.

Aside from the whoops, the track didn't seem to breakdown as much during the main event as it did Saturday. What factors led into this?

This is the natural drying process that dirt goes through. There will be even less deterioration for round three, as the dirt will have sat inside NRG Stadium for nearly two weeks. The same scenario play out at the next triple-header in Indy, too.

Both classes seem fairly wide open early on, at least from a championship perspective. How quickly, if at all, do you envision either title fight settling into a normal trend?

Let’s hope never! This unpredictability is awesome and until it changes, I am going to pretend it is here to stay.

With Justin Barcia's shifter breaking off, how difficult would that have been for him to finish the main event let alone inside the top ten? Can you explain what it would be like to race without being able to shift?

The biggest factor here is that he has a factory transmission that would likely have a different gear ratio than a standard 450. The revamped ratios would give him a much more usable first gear and was the most important aspect of him being able to maintain a decent pace. Also, the whoops broke down to the point where a tripling approach was workable. Had the whoops been big and Barcia forced to blitz, he would have been in big, big trouble. I would also like to give credit to his engine builder and team because the strain on his transmission had to be immense.

Ferrandis put in a strong effort when two of the inexperienced riders ahead of him faltered. How was Ferrandis able to keep his cool and continue to push ahead through the pack to finish second?

We have seen Ferrandis excel on conditions like we saw in Houston 1 and 2. His technical skill shines when the track requires a high level of finesse. I expect him to continue to improve as we move into Indy’s softer conditions.

How do the penalties impact the narrative of the season early on? Does Roczen have more or less pressure now that he won’t have the points lead? What about Barcia?

I don’t think it will really matter. Both of those riders know they are in the title fight and we are 1/8th of the way through the series. It’s a bad beat for Roczen and I personally don’t agree with the decision but I also don’t think the title will be decided by four points so it may be a non-factor come May. I do feel for Roczen, though. Having the red plate is a big deal for everyone involved and I don’t believe he should have lost it in this case.