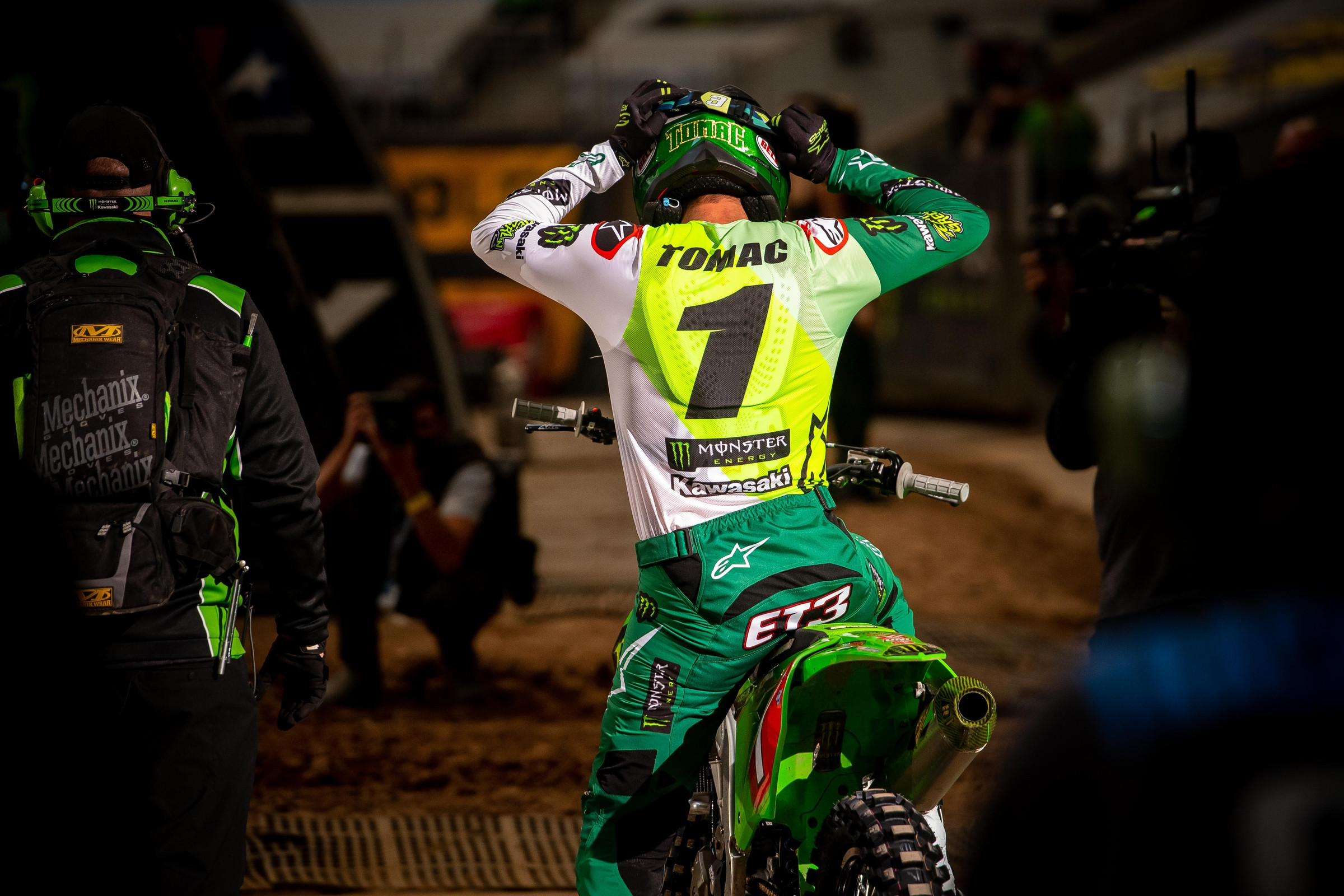 Look, these guys are all fast and we usually point out starts as the great separator for the field. Track conditions really play a factor, too, and Houston ended up ruttier, stickier and rougher than most expected. Chances are the Dirt Wurx crew threw extra water down anticipating the three-race schedule, which will probably see dryer dirt at each race. “I think I can speak for a lot of guys where we didn’t expect it to be that soft—at least I didn’t,” said Malcolm Stewart. “Texas hasn’t been that soft in the past. Hats off to the Dirt Wurx guys because when we went out there they had fixed every single corner. We went out for the parade lap and they had fixed everything except the whoops, and it still got chewed up!”

Many riders commented on how hammered the track was late in the main, and also how tricky the ruts turned out to be. Will everyone be dealing with the same scenario on Tuesday or is the dirt due to harden up soon? - Jason Weigandt

Flashes of brilliance are nothing new from Christian Craig. Whether it’s his smooth style or the occasional red-hot qualifying lap, he’s regularly doing fantastic things on a motorcycle. What we haven’t seen on a regular basis is Craig putting it all together on a single night. Until Saturday night at the opener, that is. Craig was nearly flawless in his Monster Energy/Star/Yamaha Racing debut—he was the night’s fastest 250SX qualifier, won his heat, and rode to an uncontested win in the main event, beating runner-up, Austin Forkner, by five seconds. Is this a new pattern that Craig can replicate every race day? The answer to that might determine this championship. –Aaron Hansel

Eli Tomac has never been very strong at the season opener since he graduated to the premier class, and he didn’t do anything to break that mold on Saturday night. The Monster Energy Kawasaki rider got into it with Vince Friese and went down, and ended up getting into it again with Friese, punting him off the track. We’ll probably never know exactly what went down out there, but the end result is the same—a thirteenth place for the defending champ. Tomac needs to put in a strong showing on Tuesday night. If he doesn’t, he’ll be forced to dig himself out of an early-season hole yet again. –Hansel

RJ Hampshire kicked off the season with a fifth on Saturday night, which doesn’t leave him in a bad position, championship-wise. That said, he’s probably not too happy about the way it went down, or the way he went down, more accurately. He held second for ten laps before surrendering the spot to Forkner, then crashed away the final podium spot under pressure from Colt Nichols and Jett Lawrence with just a few laps left. “We felt good in the beginning and it just got worse as the day went on,”Hampshire said. “In the Main Event, I ripped a start and just did not ride very well at all. I lost my front with a couple laps to go and then jumped off the track on the last lap. I’ll regroup and recover over the next couple of days and be better on Tuesday.” Hampshire showed real speed and fight. If he cleans up some of his mistakes there’s a good chance he’ll be somewhere on the podium at H2. -Hansel

Some trends, like winning the season opener three years in a row, are good. Others, like not winning another race for the rest of the season, not so much. Justin Barcia has both to his credit, but you know he’d like shed the latter like a mud-covered tear off. In his post-race interview he even mentioned he doesn’t want to be a “one-hit wonder” this season. Well, he’s got sixteen more opportunities to make sure that doesn’t happen, starting on Tuesday night. Will he go back-to-back at round two? -Hansel

Jason Anderson looked fine for most of Saturday, but then the story changed completely in the final five minutes, as he lost significant time and faded back from around eighth to eventually net 15th. Sub-par results for the likes of Webb and Tomac got more attention, but those final few laps, where Anderson was rolling sections and struggling badly, were quite concerning. In a team statement, Anderson said arm pump got the better of him. If so, he could have that fixed and be ready for a better night on Tuesday. If you’re an Anderson fan, you hope so. - Weigandt

Cooper Webb and Zach Osborne are considered title contenders coming into the season, but ninth and tenth are not where they wanted to be. In reality, Webb’s ninth was worse than Osborne’s tenth, because he basically finished where he started (his only major pass was on a fading Anderson). Osborne had some highlights, including a heat race win where he battled past Webb, and then a comeback from 22nd after he went down in the first turn of the main. He was plenty quick, but Webb didn’t have his usual mojo. Which one heads to the front this weekend? Both? – Weigandt

Chase Sexton was super fast in qualifying for his first-ever 450SX race. In fact he was actually fastest! At that point, you have to figure the advice for the rookie was to just get through the 20 minutes of the race, keep his cool and not crash. Well, he crashed on the sight lap. Twice! Then he crashed in the main, which wasn’t his fault, but then more mistakes came. Once again, we see that things are easier said than done. Can Sexton level out as soon as his second 450 SX race? - Weigandt

Similar advice for Jett Lawrence over at the Honda HRC truck. He was crazy fast on Friday’s press day, and darned good in practice. He wasn’t quite the same in the races, partially due to mistakes, including a late one that cost him any shot at a podium. Here’s an example, “I tried to make another pass with a lot of charging, but that didn't go as planned, as too much front brake and a wrong line in the turn ended up flicking me. I got up fairly quick, but then someone came and hit me again, knocking me back down.” There’s no doubt Jett has the ability to get it done, but he’s also quite early in his supercross development. What comes next? – Weigandt

Lots of hype around Monster Energy/Star Racing Yamaha taking over the blue 450 program, as well as the rookie debut for Dylan Ferrandis, plus everyone loves Malcolm Stewart! All three Yamaha riders (don’t forget Aaron Plessinger) had plenty to be happy about on Saturday, with good speed, solid performances and 5-7-8 finishes (in order of Stewart, Ferrandis and Plessinger). Plessinger, specifically, got a little too excited with his speed, saying he was overwhelmed when he started closing on Cooper Webb in a heat race. Let’s see if they can move further toward the front—and sustain it—on Tuesday. - Weigandt