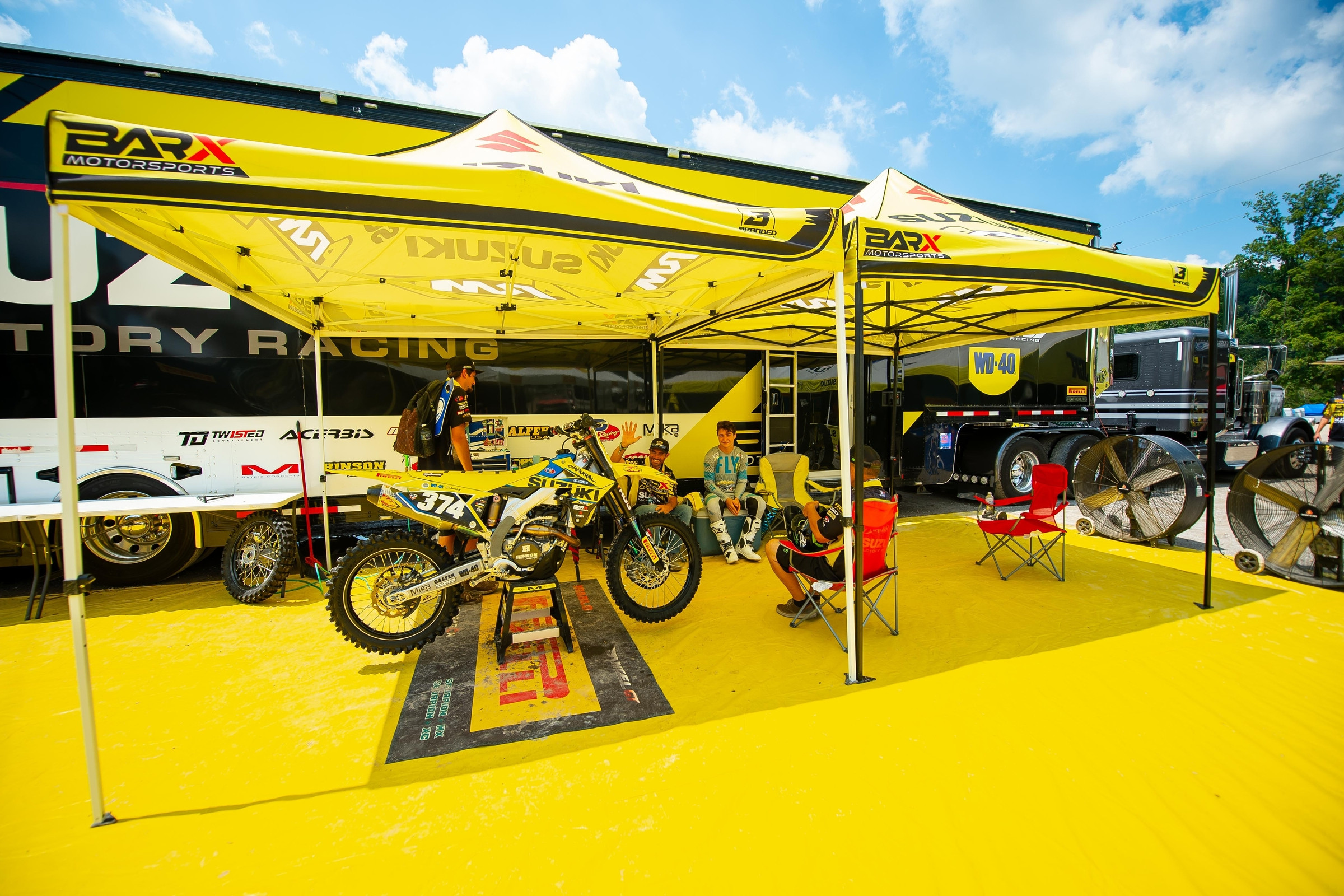 With the JGRMX team closing its doors following the conclusion of the 2020 AMA racing season, the future of Suzuki in AMA Supercross and Pro Motocross came into question. Since JGRMX would no longer be competing, it was expected the Twisted Tea/HEP Motorsports Suzuki team would be able to receive more support from the OEM since they would be the only team competing in the 450 Class. On Christmas Eve, Suzuki Motor of America, Inc officially announced that the HEP team—run by Dustin Pipes—would become the premier team 450 team.

Today, Suzuki has officially introduced the Bar X/Chaparral/Ecstar Suzuki team as the OEM’s premier team in the 250 class. The team has raced at the amateur level and even competed in several rounds of the Lucas Oil AMA Pro Motocross Championship last season with recent Loretta Lynn’s graduates Dilan Schwartz and Preston Kilroy.

Former racer Larry Brooks is the team manager, which will enter its first year racing AMA Supercross in a little over a week.

“Bar X and Suzuki have worked hard the last few years building our program with top amateur athletes, and competing in select pro events,” said Brooks in the press release from Suzuki. “We feel we are in a great place to take the next step and become the primary 250 class program for Suzuki. We are dedicated to competing with the best and making sure the RM-Z250 is up front when the gate drops for the 2021 race season.”

“We are thrilled to partner with the Bar X/Chaparral/Ecstar program as our Suzuki Supercross 250 class racing team for 2021,” said Chris Wheeler, Suzuki’s racing manager. “Bar X’s solid experience and growth in the 250 class make them a solid and exciting partner for our 2021 racing efforts,” added Wheeler.

Texas native Short will make the jump to Suzuki after a year aboard a Honda with Team Manluk/K&R Racing. He finished 15th in the 2020 250SX East Region after competing in seven main events. Short has put together consistent results the last few years but in an interview in November said he wants to break through with more flashes of speed.

“I think having consistency is really great if you’re consistently finishing well,” Short told our Kellen Brauer. “I tend to sneak it into the top 10 every now and then. From my perspective, my training and I see my riding on the race weekend, I feel like I should consistently be inside of the top 10 every time the gate drops. But that doesn’t show on paper. Consistency is great and I think it allows me to build year after year to get a little bit better, but I definitely think it’s time. I need to hang it out a little more and put it up front a little more to show people how fast I can ride a motorcycle.”

At the time of that interview, Short was uncertain of his plans for 2021 with the possibility of returning to race with the Manluk team and running his own program, with more options in mind.

“I think in a perfect world, ideally I would love to continue working with the Manluk organization to race a 250SX coast for supercross,” he said. “They haven’t really said yes or no that they’re going to do it. I think they’re in the same boat as a lot of other teams and organizations. They’re kind of trying to figure out if it makes sense with the amount of money they’ve got, with sponsor dollars. Like I said, with them being in Canada, it’s probably hard on the team owner because he wants to go to all of the races because that’s what’s fun for him. And he can’t do that with crossing the border and what not. That would be plan A for me though. I’m exploring a few different options also, as well as trying to put my own program together like I’ve done in year’s past just basically out of a van. But that’s one positive thing with the way the schedule is where you’re racing back-to-back-to-back in one city, it enables you to drive to Glendale and stay for a week. It makes sense financially to race three times, drive back, and have a little time off. That’s kind of how things are shaping up for me. I don’t really know for sure yet, but I want to go racing. One way or another, I want to make it happen.”

[Editor’s note: This interview was conducted before the Glendale Supercross rounds were cancelled.]

Cantrell made his pro debut with the Troy Lee Designs/Red Bull KTM team in 2017 and raced for the team in 2018 and 2019 as well. However, he was not re-signed by the team in 2020. His last supercross gate drop was the Denver Supercross on April 13, 2019, as he suffered a wrist injury that kept him out of racing for the remainder of the year. He returned to riding in April 2020 and has been riding a Yamaha out in California but did not race any rounds of Pro Motocross this summer. Cantrell and Short will compete on Bar X Suzuki RM-Z250 models in the 250SX East Region.

Like Cantrell, Drake also made his pro debut with Troy Lee Designs/Red Bull KTM. He won the 2018 AMA Nicky Hayden Horizon Award at Loretta Lynn’s and then turned pro for the 2019 Lucas Oil AMA Pro Motocross Championship. He made his AMA Supercross debut last year, finishing seventh in the 250SX West Region with a season-best seventh at the Oakland Supercross. The California native sat out the 2020 Pro Motocross finale because of health issues, then in December, while practicing with the Bar X team, had a crash at the test track, suffering a femur compound fracture. The team announced he will be competing in the 250SX West Region, although a return to racing has yet to be announced.

Schwartz, the most tenured rider on the Bar X team, is the newest rider to make the jump to the professional rankings. After finishing second and third overall in the 250 Pro Sport and the Open Pro Sport classes, respectively, at the 2020 AMA Amateur National Motocross Championship, Schwartz raced three rounds of Pro Motocross. He finished inside the top 15 overall in two of his three pro races. Schwartz will make his AMA Supercross debut in the 250SX West Region championship in February.

After a tough year where we saw both the GEICO Honda and JGRMX teams close their race shop doors, it will be great to see a new team in the pro paddock. Enter the Bar X/Chaparral/Ecstar Suzuki squad.