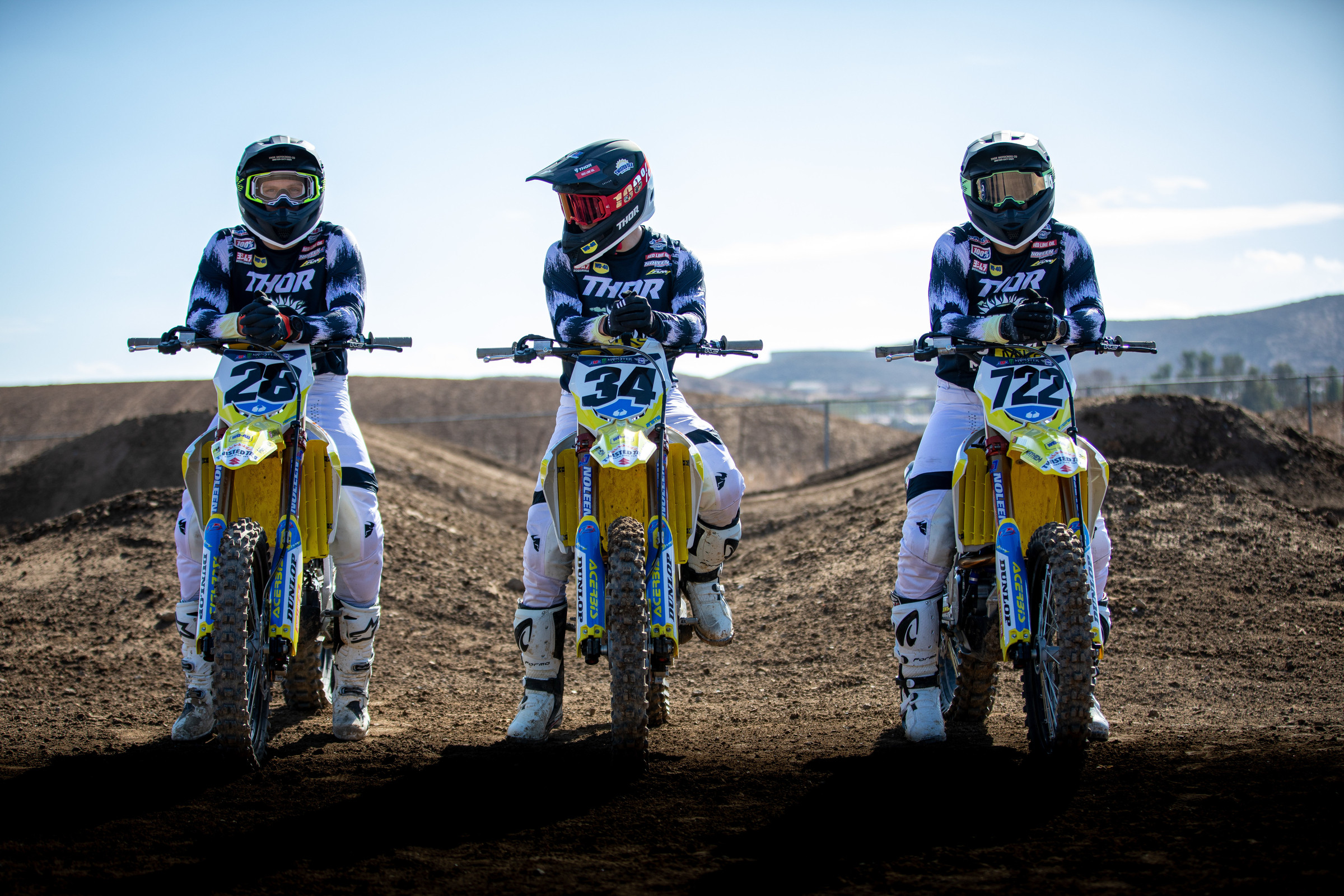 With the departure of the JGRMX Suzuki squad, it seemed obvious that the Twisted Tea/H.E.P Motorsports team would get a bump in status for 2021. That has now been confirmed, as has the rider lineup. Max Anstie and Adam Enticknap are back with the team, and Brandon Hartranft is making the move to the 450 class after a solid 250 campaign with Troy Lee Designs/Red Bull KTM in 2020. Hartranft made podiums indoors and out in '20, finished fourth in the 250SX West standings, and 10th in 250MX. It will be interesting to see how he fares on a 450.

Anstie also has something to prove, as he missed all of Monster Energy Supercross last year due to a torn Achilles. Anstie has not raced supercross full time since 2010, in the 250 class. He showed good speed en route to ninth overall in Lucas Oil AMA Pro Motocross 450MX points last season.

We're not sure exactly what the upgrade to Suzuki's "premiere" team entails, but we'd figure the team will now get access to factory parts.

Suzuki's complete announcement is below.

Brea, CA—Suzuki Motor of America, Inc. is proud to announce its premier 450 class race team for the 2021 Supercross season; partnering with the Twisted Tea/H.E.P. Motorsports Suzuki Racing Team for 2021. Suzuki has a rich history of Supercross and Motocross racing success winning 47 SX/MX Championships.

The Twisted Tea/H.E.P. Motorsports Suzuki Team will be the premier Suzuki 450 Supercross team and feature Max Anstie, Brandon Hartranft, and Adam Enticknap on the race-ready 2021 Suzuki RM-Z450. Both Anstie and Enticknap had a solid season of racing in 2020 under the H.E.P. Suzuki tent and are excited to start racing in 2021. New to the H.E.P Motorsports Suzuki team for ‘21 will be Brandon Hartranft making his rookie debut in the 450 class. All three riders will compete on the 2021 Suzuki RM-Z450 and benefit from the exceptional support of Suzuki’s RM Army support program.

“We are thrilled to up our game with Suzuki and its legendary RM-Z450 class bikes for the 2021 Supercross series,” said Twisted Tea/H.E.P. Motorsports/Suzuki Racing Team Co-Owner Dustin Pipes. “With Max, Adam, and now Brandon on the squad, we expect strong and consistent results in the premier class this season,” added Pipes.

“I’m excited to work with the Twisted Tea/H.E.P. Motorsports Team our premier 450 class Supercross team for 2021,” said Chris Wheeler, Suzuki’s Racing Manager. “This team has the experience and the strength of this rider lineup to make for a competitive and exciting Supercross season for Suzuki, and the RM Army in 2021,” added Wheeler.

Suzuki Motor of America, Inc. is excited for the upcoming 2021 Supercross season with the Twisted Tea/H.E.P. Motorsports Suzuki Racing Team. Follow all the latest Suzuki racing results and learn more about Suzuki motorcycles and ATVs at www.SuzukiCycles.com.