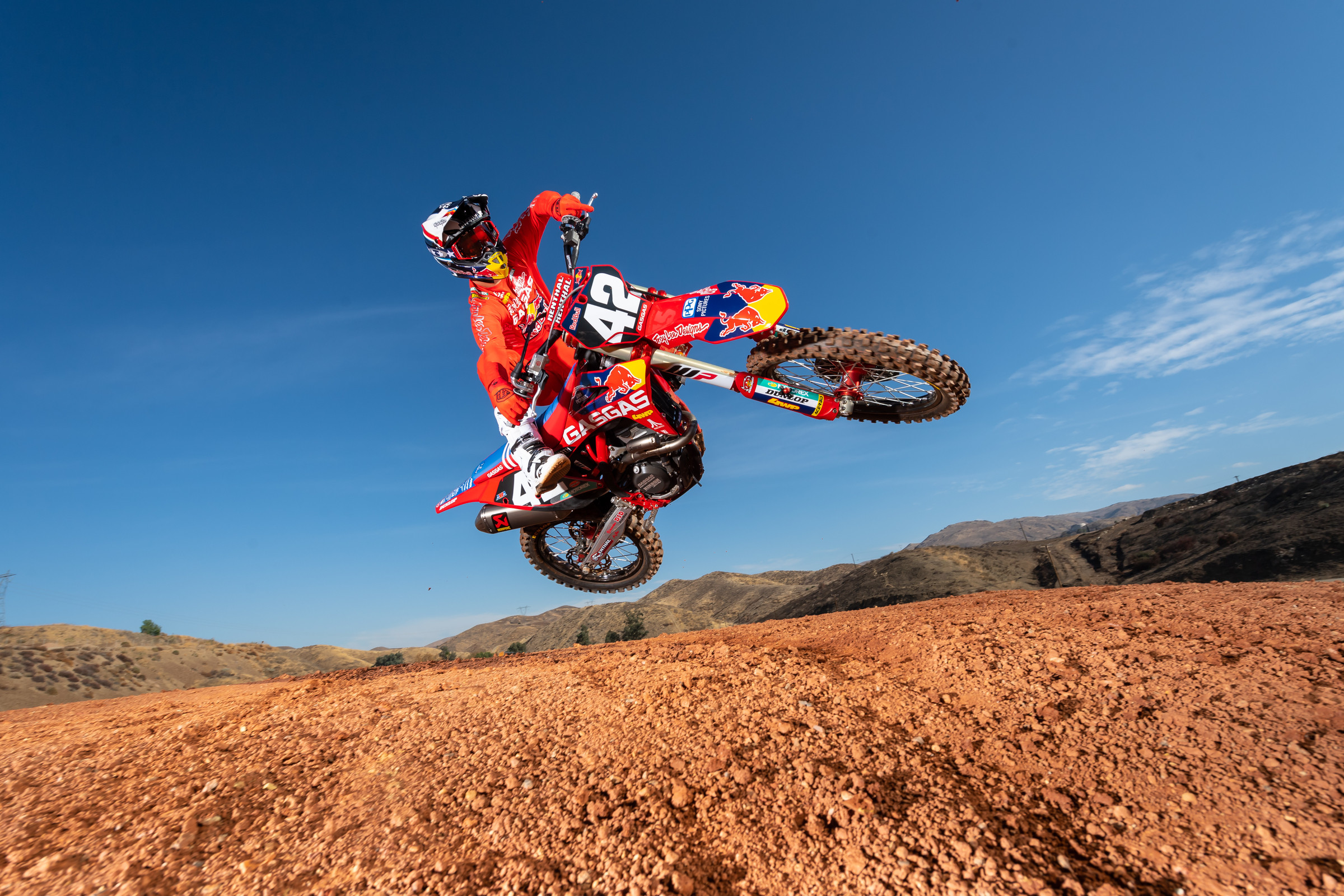 Michael Mosiman has had some great rides since turning pro in 2017 with the Rockstar Energy Husqvarna team, but he’s been just a tad off the pace of being a consistent podium threat. Now, after missing the entire 2020 season of Lucas Oil AMA Pro Motocross Championship with a concussion, he’s regrouped and is looking to take the next step with his new team, Troy Lee Designs/Red Bull/GasGas Factory Racing. We spoke with Mosiman this week to get an update on how things are coming along.

Racer X: Michael, what’s up? It’s been a while since we’ve seen you line up. When was the last time you raced?
Michael Mosiman: Since what, June? The last round in Salt Lake.

Is that the worst concussion you’ve ever had?
Most definitely. It was not good at all.

What was it like coming back from that? Were there any special procedures you had to go through or was it pretty much just hurry up and wait?
I’ve had a number of concussions. What’s calculated as a concussion, and what’s not is kind of unclear, but I’ve hit my head a number of times. I’ve never had any symptoms the next day. The next day I’ve usually been just fine. But with this one I’ve had lasting symptoms past the first day, really for a few weeks. I went to a specialist, the guy who works with the Tampa Bay Buccaneers. Gronk [Rob Gronkowski] was in there just before I was. He’s dealing with those guys, he’s a specialist. I went in there and I know the concussion protocol so well because I use to work really closely with the guy who ran it. I went in there and the guy was like, “You’re doing everything right, as far as rehabilitation.” There’s actually a lot more you can do for concussion rehabilitation than what people used to think. It’s come a long way. He was stoked, but I was still having symptoms. I described the crash to him and he was like, “Dude you had a really bad crash, and this is considered less of a sports injury and more so considered a car crash.” So I wasn’t necessarily on an abnormal healing pattern, considering the impact. It was a bummer deal for sure, but I’m all good from it now and I’m looking forward. I’m definitely not looking back.

Well I’m glad you’re better. You mentioned concussion rehabilitation has come a long way. What are some of the newer methods?
It used to be, the old fashioned way, was to avoid looking at anything that was going to stimulate your brain, to sit in a dark room. There’s a story of after Mike Alessi got that concussion at Hangtown, when he was on KTMs, his dad put him in a dark room and fed him under the door. That was the protocol. The idea is, the brain is treated much like any other muscle and needs rest, just like anything else you injure. The thought was to stimulate it as little as possible. But the thing is, the brain doesn’t really stop, no matter what, even when you’re sleeping. What they do now, they treat it like you would a muscle in rehab. You do exercises that challenge it and can even cause more symptoms. But when the symptoms arise, you don’t just stay there. You go into them, and that’s okay. You’re challenging the muscle of the brain, and over time it strengthens and adapts to the load you’re giving it. But if you never challenge it your healing process may be a little slower.

So what did you do? Did you play a bunch of chess?
[Laughs] I did, actually. But it was more vestibular ocular exercises, like where you follow a pencil with your eyes without moving your head, or you’re moving your head and not moving your eyes. I learned how to juggle, which is something that’s good to do—you’re playing with a ball and working on your motor skills and hand-eye coordination. You take a hit, now you’re a little bit slower, and the brain is sending you some warning signals, some symptoms.

When did you get back on the bike?
I got back on the bike, I think it was that off-weekend of the nationals. I forget which round. I went up to WW Ranch [Motocross Park] with the crew and cruised around and got going again. I wanted to return for the last two nationals with Rockstar Husky, so that was what we were shooting for. Then, before WW, that Thursday, we did some sprints and I was riding really well. Zacho [Osborne] was killing it and I was hanging with him and we thought maybe I’d race that weekend. Then that night I got a call from Roger [De Coster] about the GasGas deal and they were really wanting me to be absolutely sure I was 100 percent, considering it was a significant concussion. So we just took the extra time. But I was ready for the last couple rounds.

So you’ve known about this GasGas thing for a while then.
It wasn’t that long. [Justin] Barcia’s deal had been worked on for so long. For me it was kind of like… I’d heard rumors that TK [Tyler Keefe] had been asking about me and I’d considered it. I saw the dilemma at Rockstar as well. They were going to have so many guys, it was going to be packed. It was going to be absolutely jam-packed, there was going to be like seven riders. You just don’t get the same attention when there’s that many people. I’m on a team now with three people and we have undivided attention. I thought about it and I thought I could probably make it happen if I wanted to. I was going to try to make it happen, then they called and said they wanted something to happen. It worked out really well.

How are things with Troy Lee Designs/Red Bull/GasGas Factory Racing?
I love it. I love all the guys. Barcia has been really fun to hang out with, he’s an absolute kook. He lives like he rides, he’s always on the rev limiter. He’s pretty fun to hang around. And TK is really methodical and thoughtful with his approach to racing. I think that suits me really well, it’s how I go about things. I love our suspension guy too. He’s super, super good. We’ve made a lot of progress, and overall things are awesome. The bike is super cool too, it’s faster. I really like the Akrapovic pipe. It’s a little bit lighter too. Between the pipe and sub frame, I think it’s a little bit lighter. Our motor rips, they improved it like three times. I’m stoked.