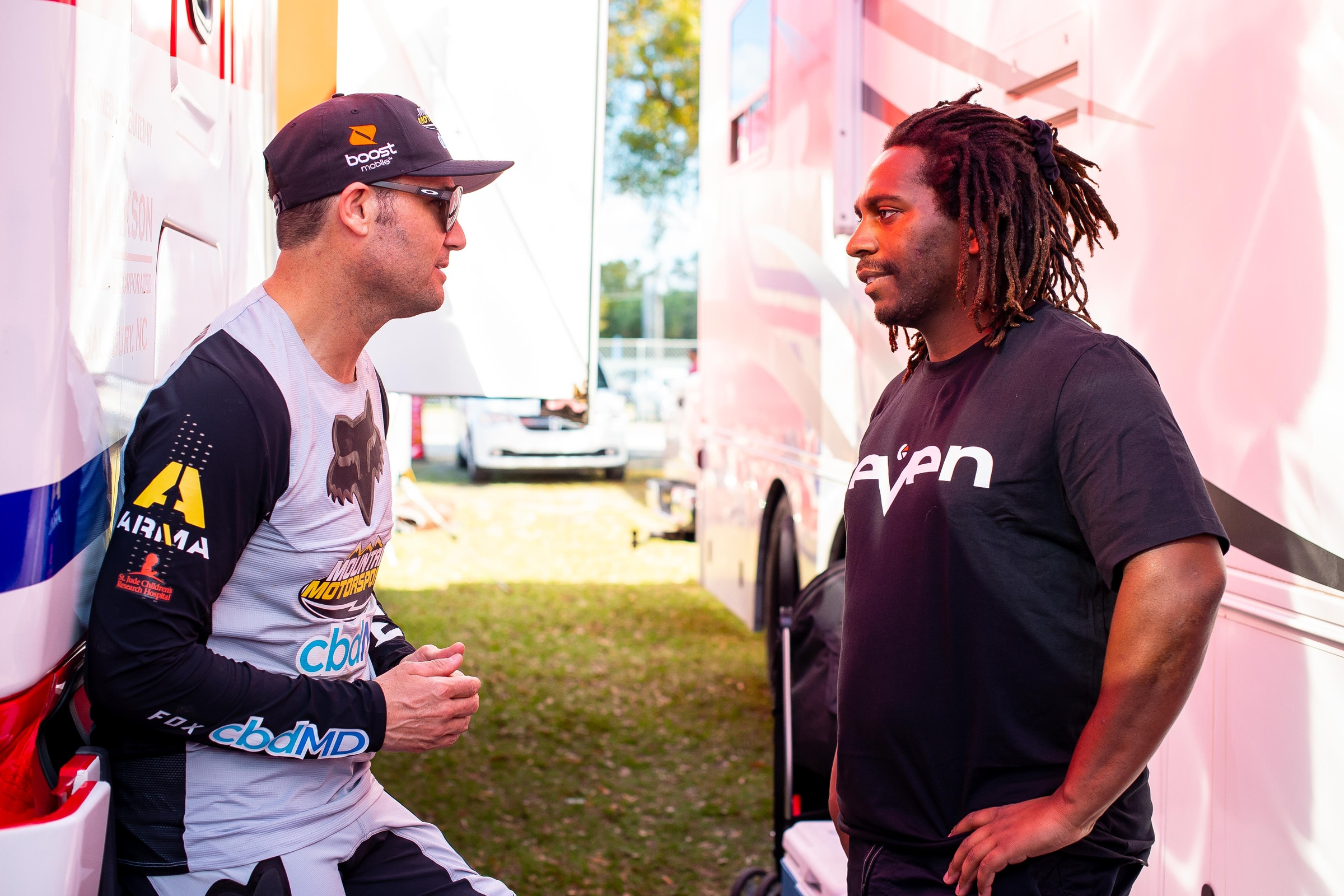 There are a lot of reasons why you can say 2020 was a crazy year. It would be easy to forget so many wild moments that happened on track this year with everything going on off the track. Anaheim 1 feels like it could easily be four or five years ago at this point but we’re not even a year removed from it yet!

With all that in mind, we wanted to run through some of the wildest storylines the on-track racing in 2020 left us with. From Justin Barcia shocking us for the second year in a row all the way down to the oldest series champion in history when the flag waved on the final races of the year.

For the three years leading into 2020, Eli Tomac kept getting the job done in the Lucas Oil AMA Pro Motocross Championship while struggling to clinch the Monster Energy AMA Supercross Championship. Tomac finally broke through to claim his first 450SX title in 2020 beating reigning series champion Cooper Webb by 25 points. Unfortunately for Tomac, his indoor struggles seemed to flip to outdoor struggles as a few early season DNF’s left the three-time champion deep in the hole. Unable to pull himself out, Tomac settled for third in the championship standings by season’s end.

As Tomac ran into struggles in Pro Motocross, Zach Osborne fired off two wins to start the shortened nine-round season and never looked back. Osborne’s career was rejuvenated in the latter half of the decade which resulted in not making his 450 Class debut last year until the ripe age of 29.

When he clinched the 2020 Lucas Oil Pro Motocross Championship on October 10, he had just turned 31, making him the oldest series champion in AMA Supercross and Motocross history.

A few weeks removed from his first career 450SX victory (and between the AMA Supercross and Pro Motocross seasons), Zach Osborne elected to race the High Voltage GNCC in Maidsville, West Virginia. Far from the regular way riders prepare for a Pro Motocross campaign, Osborne simply viewed a change of pace being a good way to spend some time and stay in shape during a time of uncertainty. He brought home his Rockstar Energy Husqvarna 29th overall on the day. 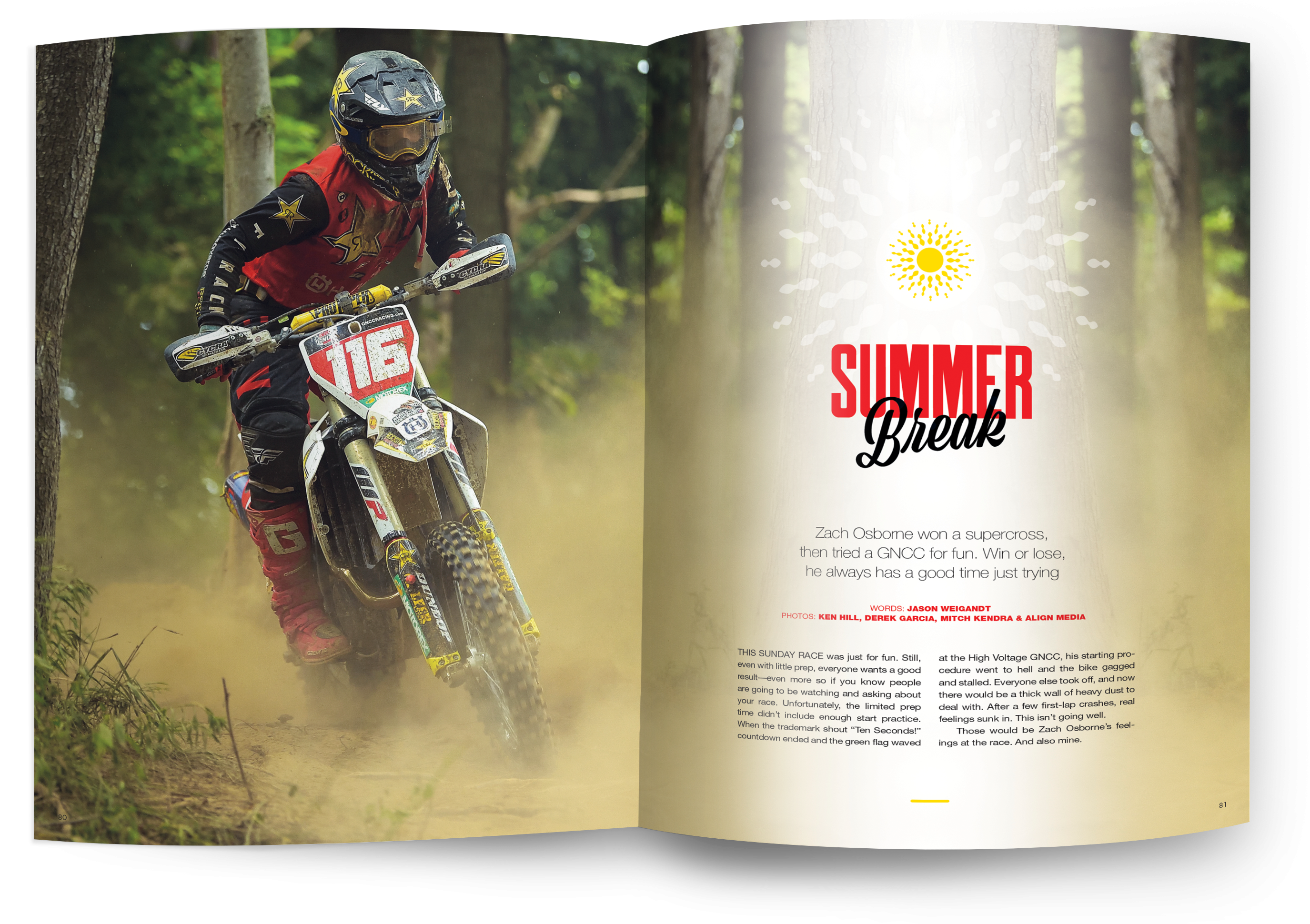 Zach Osborne won a supercross, then tried a GNCC for fun. Win or lose, he always has a good time just trying.

When Eli Tomac ran into early season problems in Pro Motocross, it was rookie Monster Energy Kawasaki teammate Adam Cianciarulo who stepped up to carry the flag for Kawasaki. Cianciarulo won four motos in the second half of the season pulling him close to Osborne in the standings at one point as well before Osborne pulled it all back together late in the season.

Cianciarulo’s strong showing led to many discussions on the coming of the “next generation” as he is just one of many riders tipped to battle for championships in the 450 Class for years to come. Finishing second in the Pro Motocross standings in his rookie season certainly turned a lot of heads.

Way back in January, Cianciarulo had already begun to prove himself a force to be reckoned with when he topped the time sheets for the first seven sessions of the year. For three practice and qualifying sessions at Anaheim 1 and St. Louis, and then the free practice session at Anaheim 2, Cianciarulo was untouched. That is, until fellow rookie (and former teammate) Martin Davalos made this whole thing ever crazier when he stopped the streak in the first qualifying session at Anaheim 2.

In what turned out to be their final year of existence, GEICO Honda had quite the year. With Chase Sexton repeating as 250SX East Region Champion before heading to the 450 Class, the team got one more supercross title to add to the mantle. Then, Jeremy Martin nearly claimed the outdoor title before Jett Lawrence won the final overall victory of the year finishing second in the last moto behind Martin and in front of fellow teammate Jo Shimoda. Not an hour later, Chase Sexton won his first career 450 Class moto and overall, leading home HRC and GEICO Honda teammate Christian Craig who would finish second (a new career best for him). 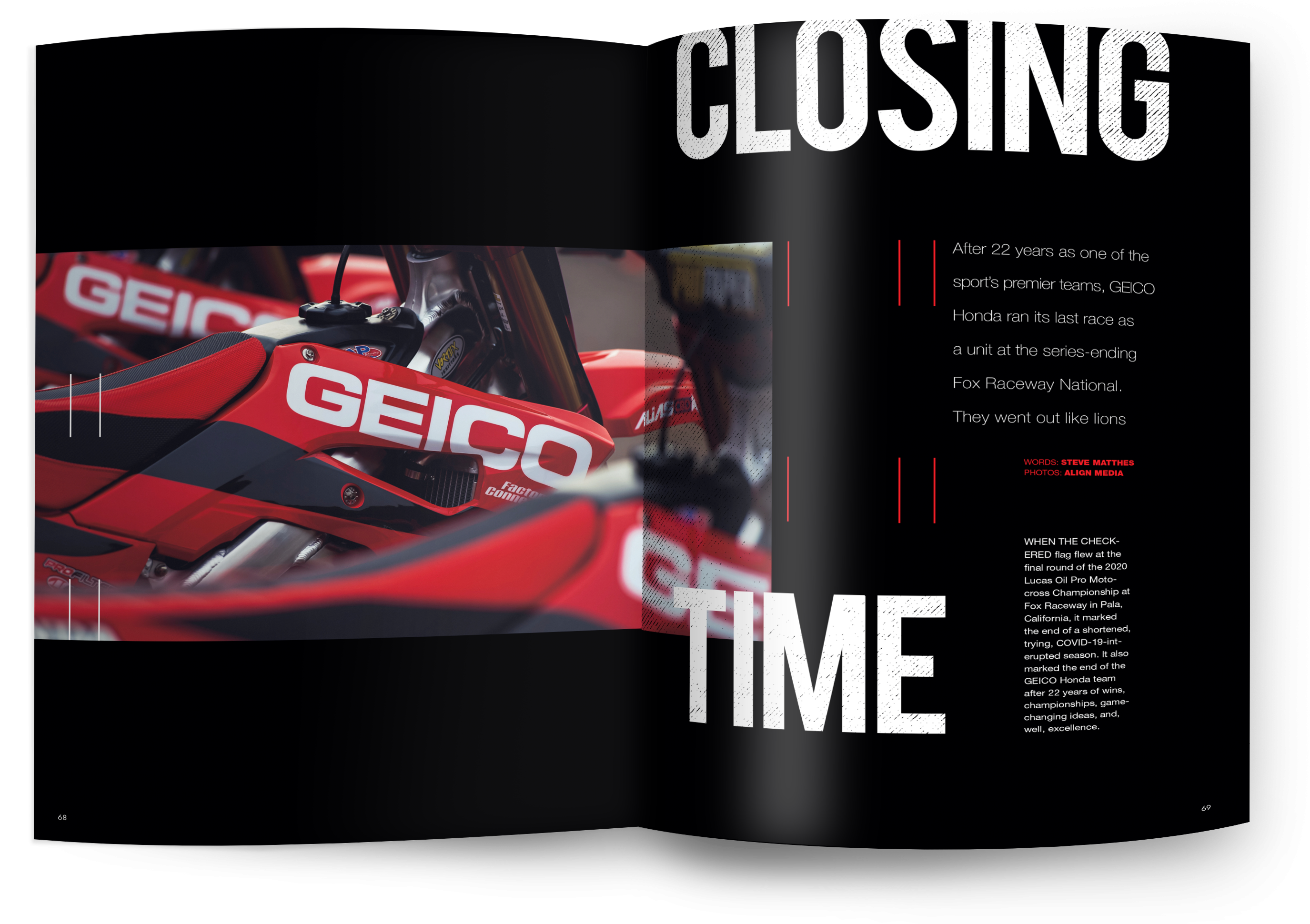 After 22 years as one of the sport’s premier teams, GEICO Honda ran its last race as a unit at the series-ending Fox Raceway National. They went out like lions.

Red Bull KTM’s Jeffrey Herlings was potentially on his way to his second FIM Motocross World Championship when the injury bug reached up and bit him again. Unfortunately, this time was nothing short of terrifying. Herlings crashed in practice for the MXGP of Citta di Faenza and broke his C1, C6, and T3 in the crash. Herlings explained that he didn’t have feeling from the neck down for over half an hour before fully regaining feeling. The season ending injury did cost him the championship though, as Slovenia’s Tim Gajser claimed his third MXGP title—his second consecutive title in as many years.

When Monster Energy Supercross, and the whole world for that matter, came to an abrupt halt after the Daytona Supercross in early March, the uncertainty surrounding racing returning at any point was unnerving for many. After a few months away, Salt Lake City finally came through as a host venue for the final seven races of the season. The unprecedented circumstances meant the first time the series ever hosted a race in the same venue four times, let alone seven times. It also produced the first, second, and third ever Wednesday night supercross races in what may turn out to be the only Wednesday supercross races ever.

MX Sports, together with the Safe-to-Race Task Force, pulled together a unique plan to start the Lucas Oil AMA Pro Motocross Championship season where Loretta Lynn’s Ranch would host Pro Motocross for the first time ever the week following the AMA Amateur National Motocross Championship. Seeing the pro riders hit the hallowed grounds, some of them for the first time in over a decade, was a cool sight to see. Then, we got to see it twice when the Washougal National was cancelled for the second round resulting in Loretta Lynn’s hosting the first two pro nationals of the year.

No French rider had ever won the 250 Class of Pro Motocross until Dylan Ferrandis finally broke through in 2020. Riders like Jean-Michel Bayle, Stephane Roncada, Christophe Pourcel, and more, all had come so close on several occasions through the years but would continuously fall short often from strange circumstances. Ferrandis snapped the curse and became just the third foreign rider to ever win the smaller bore class when he held off Jeremy Martin at season’s end to claim the crown.

Hey, remember this thing?! When there was no racing going on at all, a laundry list of motocross legends gathered in Ohio for one heck of a good time. Travis Pastrana, Broc Glover, Jeff Stanton, Kevin Windham, Ryan Villopoto, Damon Bradshaw, Mike Alessi, Ivan Tedesco, Ryan Sipes, and Jake Weimer all showed up and raced each other in short head-to-head matches. It was a good time, good racing, and a much-needed relief from the complete halt experienced around the world.

Suzuki had experienced reasonable success in the 450 Class during the 2010’s with riders like Ryan Dungey, James Stewart, and Ken Roczen all racking up victories for the team. But the 250 Class program had experienced a little-known drought in motocross until Alex Martin won the second moto at the Loretta Lynn’s 2 National. The win was the first time since Ryan Dungey in 2009 that a Suzuki had crossed the line first in the 250 Class at Pro Motocross.

For the second year in a row, a lot of attention was given to names like Tomac, Webb, Ken Roczen, and Jason Anderson before the season opener in Anaheim. And for the second year in a row, Justin Barcia walked all over that pre-season talk to win Anaheim 1. That would be the only time Barcia stood atop the box all year however, as he lost the red plate following the third race of the season and only hit the podium two more times.

For years since his unofficial retirement in 2016, James Stewart was the missing man. We never saw him at the races, or even anywhere for that matter. That is, until Monster Energy Supercross dropped a video on January 10 of James Stewart sitting on his couch and offering insights from the Anaheim opener. The reception was overwhelming with so many people glad to see James again and to hear his discussions on the racing. The videos eventually stopped coming, but James himself made an impromptu appearance at the RedBud National as a rider coach for Chase Sexton.

Defending supercross champion Cooper Webb was beginning to build a championship run up against points leader Eli Tomac when things came to a sudden stop in Arlington. During the second race of the Triple Crown, Webb flew over the bars on a triple face and slammed flat on his back on the concrete to the left of the track. Webb was visibly in pain and would be done for the night, but incredibly returned just one week later to grit out a podium in Atlanta (via a last lap charge and pass) and keep his title hopes alive for the time being.

Perhaps the coolest single moment of the year came at the RedBud 1 National when Ty Masterpool returned to racing for the first time all year. Snagging an unlikely holeshot in his first race back, Masterpool pointed to the sky as he crossed the holeshot line ahead of 39 other riders. What initially looked like a small celebration for the great start was actually explained to be a tribute to his brother Jesse, who lost his life racing in 2010.