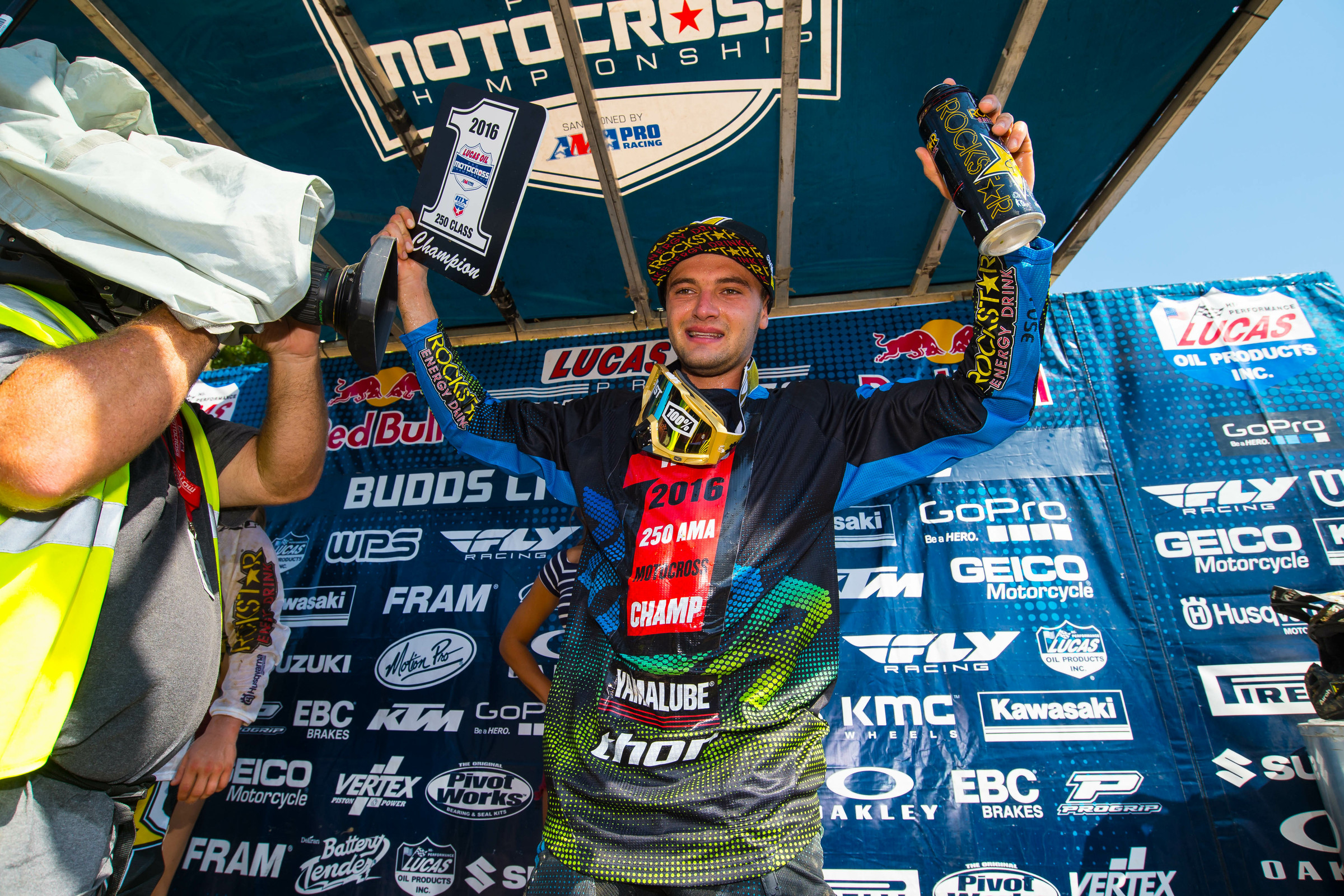 The List Racer X Rider of the Year, Part 3

In 2015 Dungey reasserted himself as the alpha dog on the AMA circuit, winning both the 2015 Monster Energy AMA Supercross Championship as well as the Lucas Oil Pro Motocross Championship title, and his feature in the January 2016 issue was called "Staying Power," as the man from Minnesota continued to consistently stay at the front of the pack in both SX and MX aboard his Red Bull KTM.

In fact, Dungey won again in the 2016 AMA Supercross Championship, but then outdoors he made a very rare and costly mistake. Dungey crashed over the bars at the Thunder Valley round in June, injuring his neck. He still got up and finished the race, scoring second overall. But little did anyone know at the time that Dungey would never race another outdoor national. His 2016 season was over, and soon his career would be as well. While Dungey handled supercross without much drama, Ken Roczen, revitalized in his second year on the Soaring Eagle/Jimmy John’s RCH Suzuki, was virtually unstoppable in Lucas Oil Pro Motocross, taking his second 450MX title in three years. Meanwhile, in the 250 class, a new superstar was emerging. Star Racing Yamaha's Cooper Webb first won the 250 SX West Region for the second straight year, then he added the 250 Pro Motocross Championship, displacing his teammate Jeremy Martin as champion. He then beat Dutch legend Jeffrey Herlings at the U.S. Grand Prix at Charlotte Motor Speedway. Finally, to round out his season, Webb moved up to a 450 to almost lead Team USA at the Motocross of Nations in Italy. That was more than enough for him to claim the 2016 Racer X Rider of the Year honors.

For 2017, Ryan Dungey returned to form, injured neck and all, and narrowly won a thrilling AMA Supercross showdown against Monster Energy Kawasaki's Eli Tomac for his third-straight SX title. He then promptly rode off into the sunset, announcing his retirement before the 2017 Lucas Oil AMA Pro Motocross Championship even started. That title would in fact go to Tomac, though the more impressive season of all would again come from a 250 rider. Rockstar Energy Husqvarna's Zach Osborne, who's career had taken him all over the world in the hopes of finding success at the highest level, finally found it in 2017, winning a thrilling 250SX East Region with a do-or-die last lap pass on Joey Savatgy at the Las Vegas finale. Afterwards, Osborne went on to take the 250 Pro Motocross title, Husqvarna's first in the U.S. since 1976. And he closed the season out by leading Team USA in the Motocross of Nations at a muddy British circuit, which was won by France. "Process of Determination" was the title of Zacho's 2017 Racer X Rider of the Year.

In 2018 there was a big surprise in AMA Supercross when Rockstar Energy Husqvarna's Jason Anderson emerged as champion. But then he had a bizarre practice crash while riding at Glen Helen, badly breaking his foot and ending his season. Eli Tomac once again won the 450 Pro Motocross crown for the second straight summer, and Star Racing Yamaha's Aaron Plessinger won both the 250SX West Region and the 250 Class of Pro Motocross, making him the top 250 rider of 2018. But the most impressive rider on the planet that year was Jeffrey Herlings, despite the fact that he doesn't even race supercross. Herlings dominated MXGP, winning 33 of the 38 motos he entered, including the last 17 motos in a row. He also won his class at the 2018 Motocross of Nations, which was held at RedBud MX in the U.S. This was one year after he shocked American fans when he showed up at the last round of the '17 Pro Motocross series in the U.S., going 1-1 at the Ironman National in Indiana. That was more than enough for the Dutchman to be named Racer X's 2018 Rider of the Year, the one and only time a non-AMA rider earned this honor.

The breakout star of 2019 was one that was already considered a superstar. After winning both 250 titles in 2016, Cooper Webb moved up to the 450 class and a Yamaha factory team ride. It didn't go well. Webb seemed to lose his mojo, never meshing with the YZ450F like he did the 250. So when an offer came in from Roger De Coster to move over to the Red Bull KTM team, Webb jumped at the chance to start over. The more did wonders for his career, as Webb quickly got back up to speed and began winning main events in Monster Energy AMA Supercross. By the time it was all over Cooper Webb was the 2019 AMA Supercross Champion, as well as Racer X Rider of the Year for the second time in his career. The feature of Webb's turnaround and ROY award was "Flipping the Script."

Finally, 2020, a year that has been so unlike any other in the past that we almost didn't have a Racer X Rider of the Year because we almost didn't have a racing season. The coronavirus hit in March, stopping AMA Supercross in its tracks after Daytona. It finally got restarted in early summer with an unprecedented seven-race residency in Salt Lake City. It was there that Eli Tomac finally won his first Monster Energy AMA Supercross Championship, after years of coming oh-so-close. Ironically, he didn't win the 450 Pro Motocross title for the first time in four years in an abbreviated outdoor series that didn't even get started until mid-August. But Tomac finally reaching his long-awaited SX goal also meant that he was finally named the Racer X Rider of the Year for 2020. You can read about his ascent, which includes insight from great supercross champions of the past, in the feature "Eli's Summit" in the brand new February 2021 issue of Racer X Illustrated. 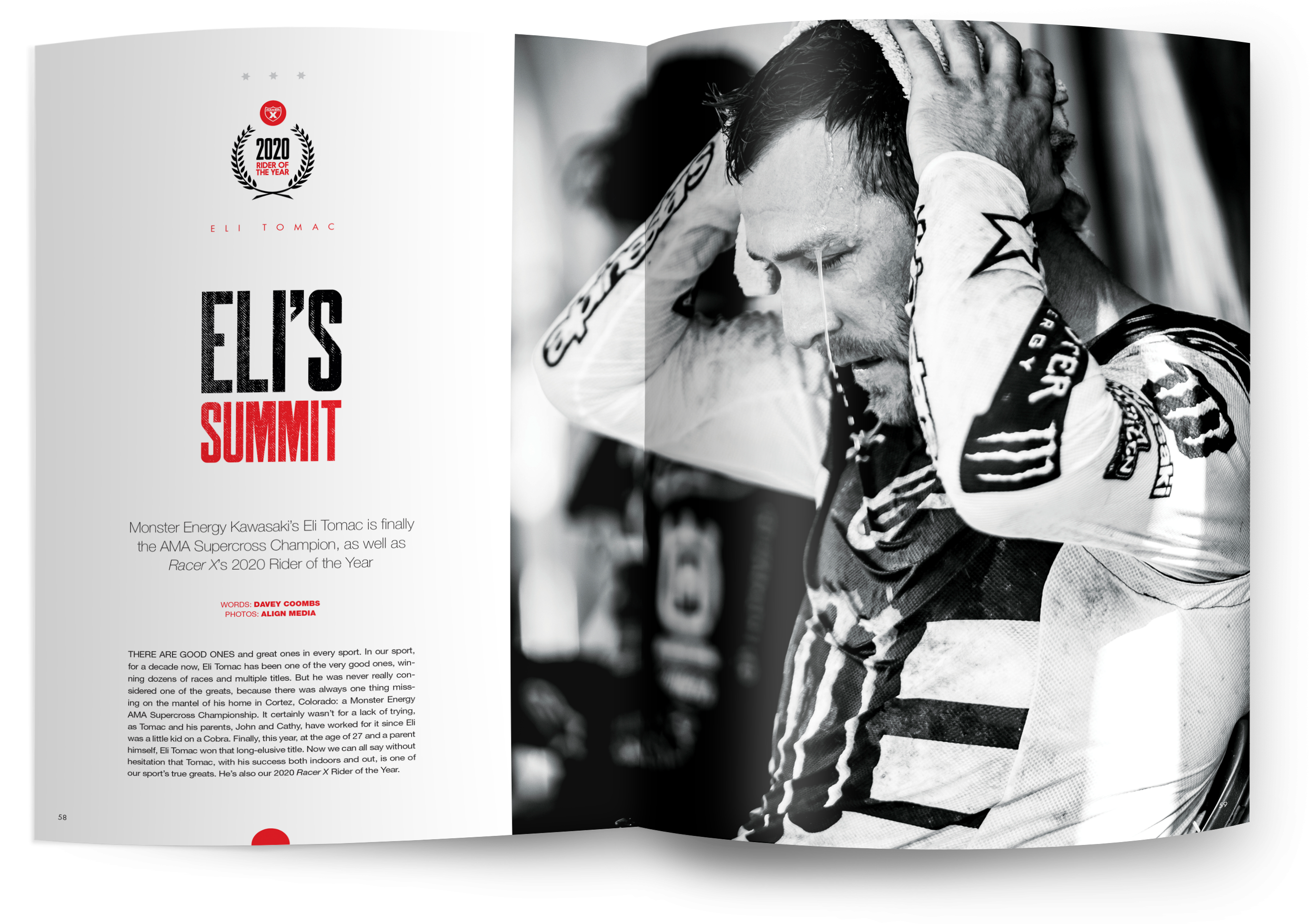 Monster Energy Kawasaki’s Eli Tomac is finally the AMA Supercross Champion, as well as Racer X’s 2020 Rider of the Year.