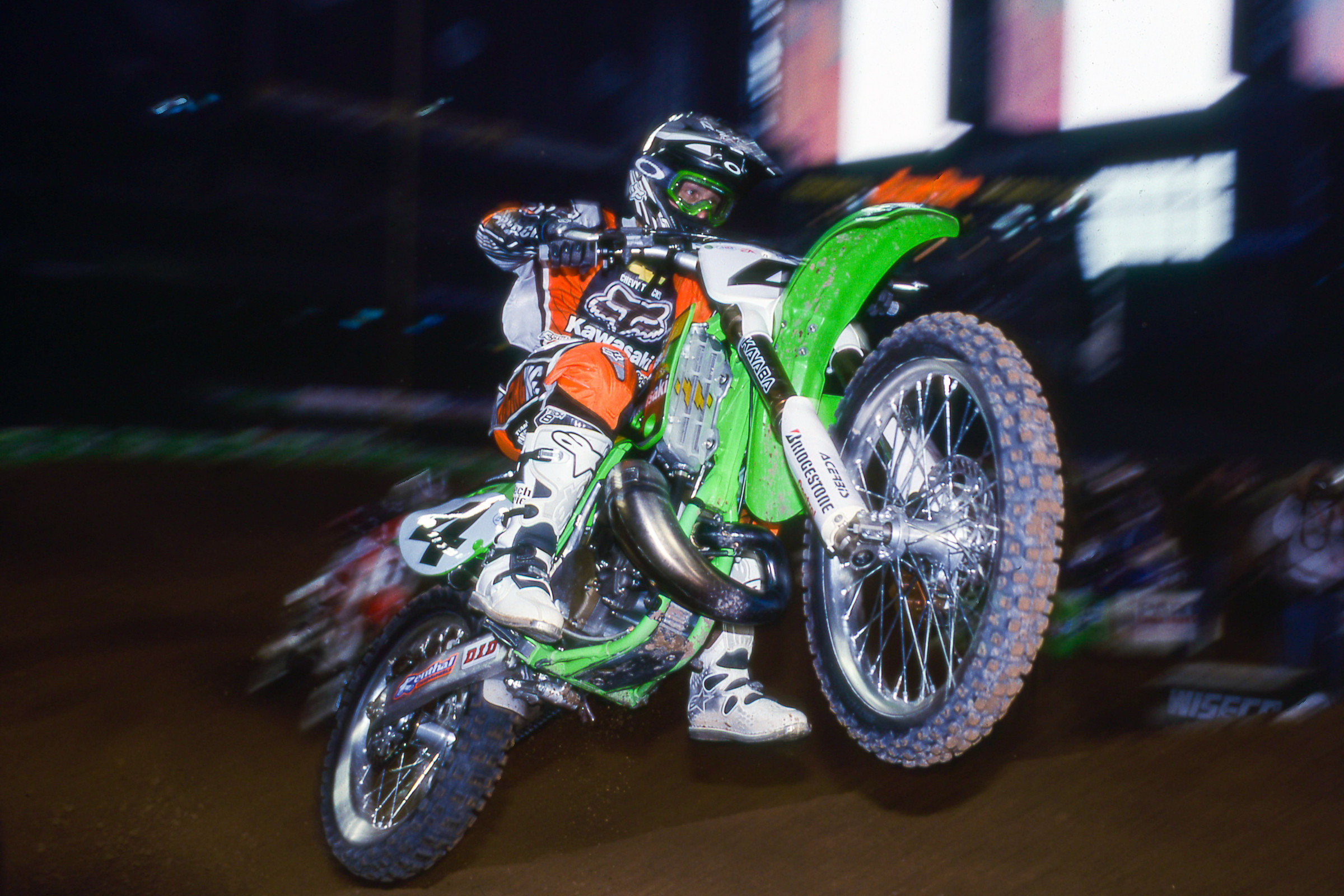 The Racer X Rider of the Year was first named for the 2001 season, three years after we turned Racer X Illustrated from a newspaper into a magazine. Had we named a ROY for 1998, '99 or 2000, it almost certainly would have been Jeremy McGrath, who won the AMA Supercross Championship in all three of those years. It was Jeremy's success and star power that made the sport bigger throughout the '90s, and that it turn helped us make the move from an underground rag to a glossy mag. When we decided to start naming someone as Rider of the Year, though, unfortunately for Jeremy his dominance was finally over. Ricky Carmichael had taken over the sport, wrestling the SX crown from Jeremy with 13 straight wins to end the '01 AMA Supercross Series, and then dominating the 250 Nationals that summer for his fifth straight Pro Motocross title.

But here's the thing: In 2001 we decided our ROY by popular vote with our readers, and despite winning 22 of the 28 races he entered in SX/MX, Carmichael only got 29.5 percent of the popular vote. Maybe it was because folks were mad he had left Kawasaki for Honda at the end of the season, leading to a chorus of boos at the U.S. Open of Supercross when Ricky debuted his new Honda CR250, allowing the organizers to talk him into being lowered from the ceiling with a King's crown on his head. More likely it was the simple fact that he just wasn't Jeremy McGrath, the all-time King of Supercross and most popular American rider of all time. That led us to title the feature on Carmichael in our January '02 issue, "Everybody Loves a Winner?"

The next year Carmichael was even more dominant, despite a rocky start in the 2002 AMA Supercross Series, where he crashed himself out in the main event, leading to a chorus of cheers for the Anaheim faithful. Carmichael got himself together after that, won a second straight AMA Supercross Championship, and then laid down the first undefeated Pro Motocross season in history, winning all 12 Nationals and 24 motos. But the fans were still not completely warming up to him, and so the 2002 ROY feature's title in the January 2003 issue was "Ricky Carmichael Can't Lose; Ricky Carmichael Can't Win." It was really no surprise that RC was our ROY again, but Mike LaRocco won the U.S. Open of Supercross and the $100,000 jackpot, so he got the cover instead.

Carmichael's winning continued in 2003, as he took his third-straight AMA Supercross crown and fourth straight AMA 250 Pro Motocross title, giving him ten major titles to this point of his professional career. This time the Rider of the Year feature went into the December '03 issue, and it was called "Scoreboard: 2003 Racer X Rider of the Year Ricky Carmichael keeps on winning... and winning... and winning..." Maybe that was a jinx, because while the issue was at the printer in November, RC crashed in the whoops at his SX test track in Florida, tearing his ACL. He was already out of the '04 SX series.

In 2004, three giant-sized stories were dominating AMA Supercross and Pro Motocross. With Carmichael out, Australian import Chad Reed ascended to the top of the stadium motocross world and won the '04 AMA Supercross Championship. In the 125 class, James Stewart was absolutely dominating both indoors and outdoors, though he did not complete a perfect season in either series. And then there was Carmichael, who forfeited his AMA Supercross crown due to the knee injury, could not come to terms on a new contract with Honda, and shocked everyone by signing with Suzuki instead for the 2005 season—and that was in March '04, while he was still rehabbing his knee injury. Carmichael returned to competition at the Hangtown MX opener, still with Honda, and began yet another perfect summer, this one even more dominant than the previous one. Whereas he led 96.4 percent of all the outdoor laps in 2002 (352 out of 365), in 2004 he led 370 out of 382 laps, giving him an astonishing 96.8 percent of the laps led. And making it even more historic was the fact that RC was now on a Honda CRF450, giving that particular model its first-ever AMA Pro Motocross title. And even after all these years, it's still the only major AMA MX/SX title won by the CRF450R. Carmichael never lost as much as a moto on the CRF450, then parked it after his masterpiece and stepped aboard a Suzuki RM250 to start preparing for the 2005 AMA Supercross season. By then, opinions had flipped, as our readers voted him as 2004 Racer X Rider of the Year for the fourth straight year, with 59.77 percent of the vote to Stewart's 29.72 percent and Reed's 5.21 percent.

In 2005, for the third time in four years, Ricky Carmichael won all 12 overalls in Pro Motocross, though he was not perfect, dropping the first moto of the season to James Stewart at Hangtown and one to Reed at Southwick. This after he wrestled his AMA Supercross crown back from Reed, his fourth in five years. RC then went to the 2005 Motocross of Nations for Team USA and swept both motos aboard to lead Team USA to the title. Finally, he also won the U.S. Open of Supercross. What made this year unique in our sport's history is that Carmichael won AMA Supercross aboard a Suzuki RM250 two-stroke and then topped AMA Pro Motocross aboard a Suzuki RM-Z450 four-stroke. Nobody before or since has ever won AMA titles in the same year aboard such different models. And yes, he was 2005 Racer X Rider of the Year.

Carmichael's reign as our Racer X Rider of the Year lasted one more year. He again won the AMA Supercross crown as well as the 450 Pro Motocross Championship with Suzuki, but he had also let the world know that he was about to step away from motorcycle racing, but not before saying he would run a farewell tour of 12 SX/MX races in 2007, and then the '07 Motocross of Nations at Budd Creek, his last professional motorcycle race. He was also about to test the waters in NASCAR Truck racing, which is why we jokingly referred to him on our January '07 cover as "Driver of the Year? RC's New Ride."

Hard to know it would happen at the time, but when the Racer X Rider of the Year Award came to be in 2001, only one rider would win it for the first six years: Ricky Carmichael. Since RC was only going to run half of the races in 2007 and thus not win any titles, someone else was finally going to get the award soon. We’ll have more on that in part two!