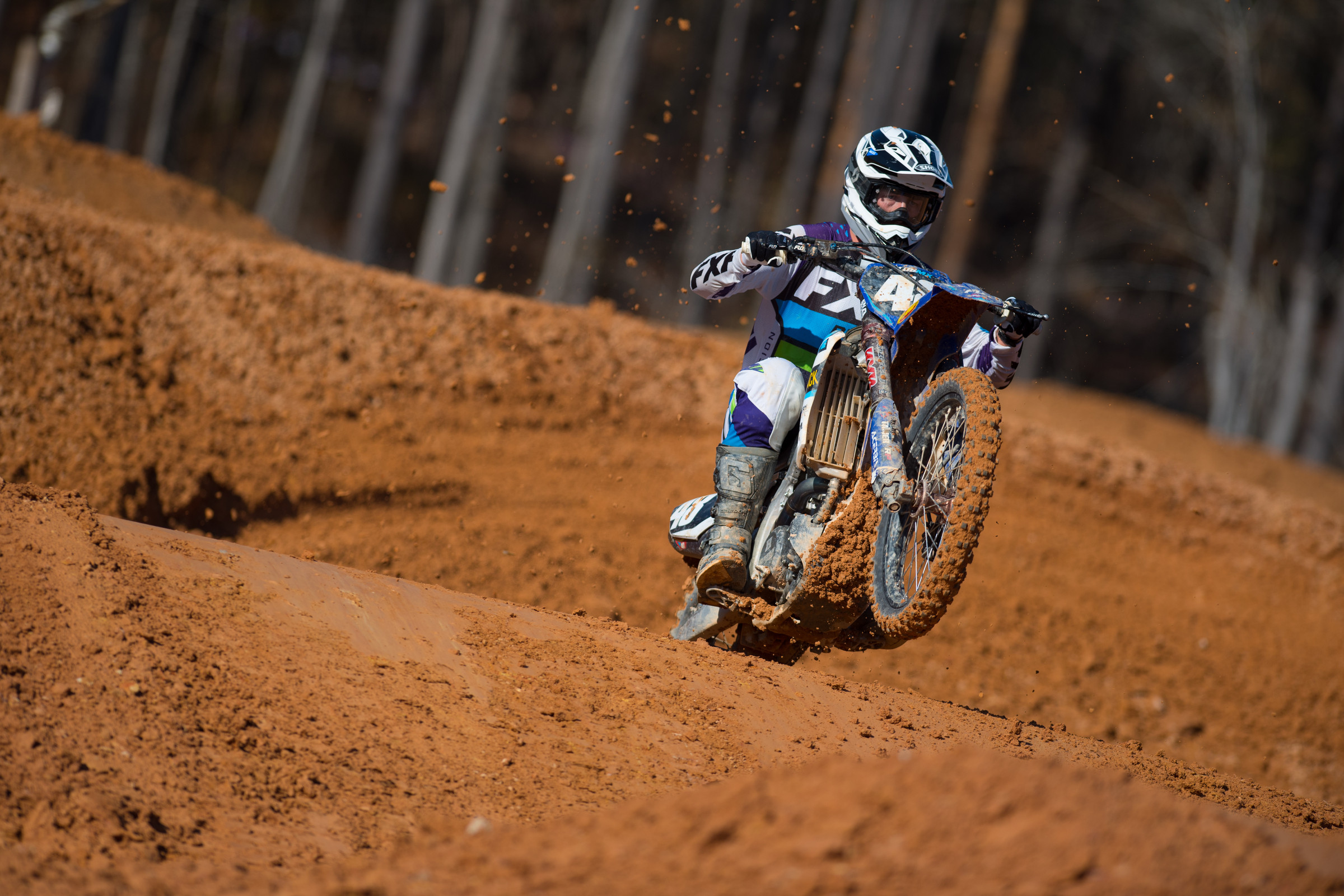 There are many different levels of bad to the stories of 2020, so we’re not saying that Garrett Marchbanks had it worse than some others. In a racing sense, though, it was bad. He won the Daytona Supercross to score his first career professional win, which would likely have set him up on another step in the sport, confidence wise. Instead, just days later the entire world came to a stop. By the time racing resumed, everything was different, and suddenly Marchbanks went from winning a race in his second supercross season to not even having a ride.

He landed with the ClubMX team for 2021. What happened to the factory rides? How can he do on this team? We visited ClubMX on Tuesday to find out.

Racer X: Last time we saw you, you were on the side of the track in Utah on a Tuff Block.
Garrett Marchbanks: Yup!

It sounded like at first the injury wouldn’t be so bad. Did it get worse or did the diagnosis change?
When I was laying there I didn’t know what was going on. I had a concussion, but I definitely knew something wasn’t right with my body. At first I didn’t know about the knee stuff but I remember being in the hospital and I basically couldn’t even move my left leg. I was like, “Maybe I just sprained it?” A couple of days later they were like, “Yeah so pretty much your whole knee is gone!” I was like, “Oh okay! That’s not good!”

So when you got the news, it was bad.
Yeah the doctor was tugging on it, and he thought maybe I had just torn my MCL. But we got the MRI and it said I tore the PCL in half, tore the MCL off the bone. Then I had a lacerated liver and bruised lung and bruised ribs. It was a good one.

What was worse? Knee or internal stuff?
Honestly, I don’t know. The first four days I never thought I would be the same. I couldn’t sit down or get up. I looked like a old dude! A week after that, the leg injury was the worse thing ever. You move your leg at all and you feel like you wanna cry. So I’d say the leg was the winner. That was worse.

Okay so somehow you ended up not on a factory team. We heard lots of rumors of what teams you would ride for in 2021. None of it worked out. What the heck happened?
Honestly, I don’t even know. I talked to every team, and they were all like, “Yeah, we want you we want you.” Then I waited four months for it to happen, and there was just nothing. It kind of seemed like everyone played me in a way. I don’t know if they were trying to get me to ride for free or what. I don’t know. In the end, I just wanted to ride for ClubMX. They respect me over here and they have a really good program on and off the bike. I really love it here.

You had ridden at ClubMX when you were younger?
Yeah, I think ages 12-15.

So when you found out this might have been an option, did you just go for it because you know the guys, or did you need to test the bike or come look at things more closely?
I just watched a lot of film of the Club guys that I raced against last year. They had a lot of good starts last year. Like when [Enzo] Lopes was racing for the team in 2020, he’s a pretty big dude and he got good starts. I need a bike that has the power. When I came out here to test it, the first three laps I knew the bike was good. It has the bottom and the mid, which is what I really need. I feel like it has way more bottom and mid than the other bikes.

So you’re not on a factory team, but you don’t feel like you’re at a disadvantage?
No. I feel like it’s as good as a factory team. Bike is good. Honestly, yeah we might not have the unlimited parts like the other guys, but they’re a good team and we have the stuff to win races.

Is there a little extra fire because you didn’t get on one of the factory teams?
Oh yeah. I want to make them pay.

For real?
Oh yeah! Oh heck yeah! I’m pushing as hard as I can every day. This is the most motivation I’ve had since I was little, on and off the bike. I’m not saying I wasn’t trying hard before, but I’m excited.

Okay so you won Daytona last year. That got the headlines. But even at the first 250 East race in Tampa, we could tell you had gotten better than you were as a rookie in 2019. Do you feel you have progressed the way you would have wanted to? Do you wish you would have done better?
Um, I for sure feel like I progressed a decent amount even more than last year. I was still learning whoops last year, I wasn’t the best, obviously, but I was a heck of a lot better than I was the year before. I was a top-five guy all last season.

That was better than 2019?
Oh yeah, my first year I was struggling for eighth place. It was bad. On this bike now, it handles a lot better, and I’ve made a lot of progress in whoops. At first I was struggling, I’m not sure if it was because I was out of shape at first, but now I feel good and I’m ripping on the thing.

This is just because you were injured for so long?
Yeah. I was off the bike for four months. That’s the longest I’d ever been off.

So you’re jumping on this bike coming off the couch?
Yeah, I had only ridden three or four times before I tested this bike. Arm pump was for sure serious after two laps. The bike was good, though.

So where are you at now?
Since day one I’ve been on the bootcamp program, and that was late September, I think. It was hell for the first month. I’m talking throwing up after motos. I was trying so hard. Now I feel like I’m 100 percent, and I feel like I’m in way better shape than I was last year. Just because of how we get to do it here. I get to ride with so many good guys. I’ve got my teammates Jace [Owen] and Joey [Crown], [Justin] Brayton is here, it’s good.

So when you won Daytona, did you think that was the breakthrough and everything was going up from there?
I mean, I thought it was the breakthrough. I had so much momentum after that, I felt like I had things clicking on and off the bike. Then it was like “Oh, damn.” That sucks. We went into outdoor testing and I felt good, for sure the fastest guy on the team, I felt. Then I caught my ankle one day and inflamed some tendons in my foot. I had done that before Tampa, and then hurt it again. I found out the screws in my ankle has affected my healing. So I had surgery. I only had two weeks on the bike before Salt Lake.

Oh so you were not where you were at Daytona when we saw you race again at Salt Lake City?
No! I don’t want to say I was out of shape, but I was still trying to get back in riding shape.

So if COVID-19 doesn’t hit, and we go to Indy the weekend after Daytona, you think things are different?
Oh yeah. I was feeling amazing.

So you go from winning Daytona, everything is feeling good, then COVID break, then injury, then another injury and they you end up not getting a ride. How down in the dumps did you get?
Oh, I didn’t know what to do at one point. Month three of the injury, I was seriously sitting there saying, “I don’t know if I want to do this anymore.”

You mean, you didn’t know if you wanted to go racing anymore?
Oh yeah. I just felt like I got so screwed over by the racing industry. I get it that a lot of teams were full, but I can’t believe no one was able to find one spot. It’s not like I wanted to give up, I don’t give up easily, but it’s so hard to do it on your own. I didn’t want to do it full privateer on my own. For Club to call me the whole time I was hurt, and then to offer me something, that kept my head in it. Then, once I found out all the rest of the teams didn’t want me, I was like “Let’s give it a shot.” So far, this is the happiest I’ve been on a dirt bike in probably four years.

Let me guess: you couldn’t watch any races this year after you were hurt?
No! I watched a little bit of the East/West Shootout, and outdoors I could only watch the 450 class. I’m a huge fan of [Zach] Osborne and [Eli] Tomac. So I’d watch that. But I wasn’t going to watch the 250 class!