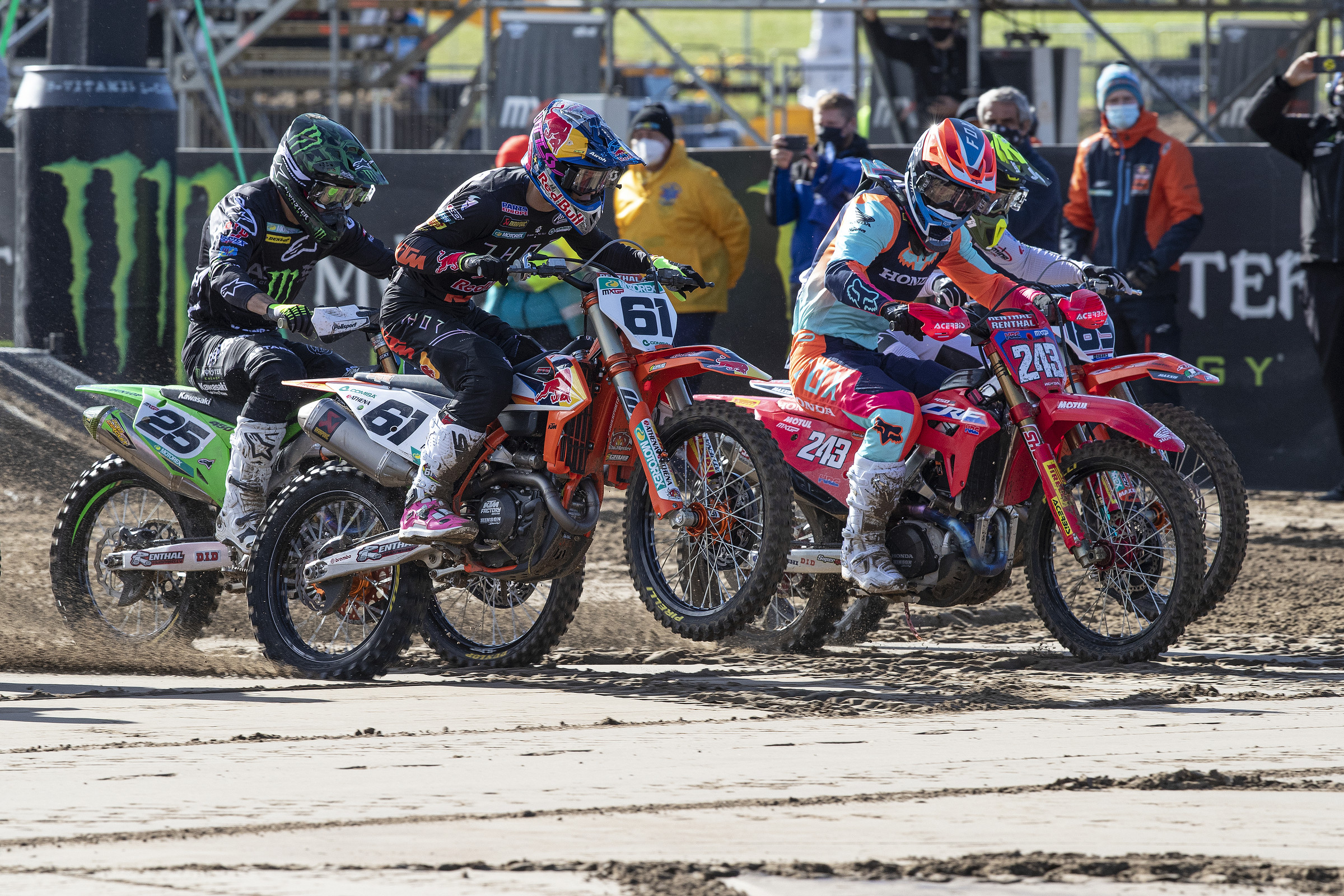 GP Report 4 Observations From the MXGP of Limburg

Lommel part two and Red Bull KTM strike back with their fifth double sweep of 2020 as their two 19-year-olds perform the business at round 14 of 18.

Jorge Prado recorded a 2-1 for his third Grand Prix win of his rookie season in MXGP. The Spaniard fronted Honda HRC’s Tim Gajser—now ten times on the podium this year—and teammate Tony Cairoli in third place, who admitted the ‘ugly copy’ of himself at Lommel last Sunday was nowhere near his usual impeccable standards for sandy speed. The 35-year-old Sicilian hit another career milestone this week in a blustery Belgium by passing the 10,000-points mark in his career.

For all of Prado’s holeshot ‘heat’ and deft technique, the Grand Prix of Limburg could count as a meeting that Gajser lost just as much as the KTM man prevailed. The Slovenian crashed after hitting the front while leading the first moto and had to fight hard to regain control of the race. He then ran off the track and into an advertising board in the second affair and dropped out and away from a close KTM duel between Prado and Cairoli, with the younger of the two emerging as the winner.

Gajser was still able to finish runner-up with his 1-3 and even make a seven-point gain on Cairoli in the championship, pulling his advantage with the red plate to 55. Despite the positive outcome the world champion’s propensity for error is something that should give cause for concern in the Honda camp. MXGP has already been battered by injury in 2020 through the relentless scheduling. It’s hard to argue against Gajser’s current billing as the strongest rider in the class and the athlete ‘most likely’ to go all the way but for all his formidability #243 has ridden his luck so far with spills this season and the contest is winding down rapidly with just four GPs and eight motos to go in the next two weeks.

“The track was quite difficult with many lines and many bumps,” he offered by way of explanation for the misjudgements. “When I tried to push then it is easy to make a mistake. I ran off the track in the second moto and it was the wrong place because I went into the banners. I’m happy with the bike. It’s weird to say but I really enjoy riding sand.”

Monster Energy Kawasaki Romain Febvre (fourth overall on the day) will be annoyed for throwing away third place on the waves and two corners from the flag on the last lap of the second moto. Goodbye overall podium. Countryman Gautier Paulin could not return to the top three after an engine problem in the first moto cast him outside the top ten for much of the distance before the Yamaha despairingly exhaled for a last time on the final circulation.

Cairoli (5-2) was mildy sanguine about the thought of a record-equalling tenth world title slowly easing away.

“Still anything can happen…but Tim is very strong at the moment,” he admitted. “I just try to do my best all the time. Recuperation is not easy, especially one race right after the other, maybe at their age it’s easier! At mine it’s a bit different. The championship is always important…but it is also important to enjoy the riding and stay safe. If you can go for the win then you push, if not then you take the points: to finish the season in the top three is also positive.”

Five more points for MX2 championship leader Tom Vialle over Monster Energy Yamaha rival Jago Geerts and a second successive win at Lommel in three days. The Frenchman is not quite following the script. Geerts should be dominating on home turf and his preferred terrain. The Belgian showed his ability in the first moto when he led, binned the Yamaha then set times three-seconds a lap faster than Vialle at the front to catch back up and win. Vialle initially seemed almost startled to be at the front again and stiffened up with arm-pump. “He learned another lesson today,” assessed Red Bull KTM racing manager and Vialle’s trainer and mentor Joel Smets. “You cannot ease off like that because a rider like Jago will be back at you.”

Geerts and Vialle formed part of a front-running three in the second moto with F&H Kawasaki’s Roan Van De Moosdijk forgetting some of his disappointment with a technical DNF from the first race to show his sand acumen. Geerts was soon hunting the KX250’s rear wheel but after assuming the lead he threw the Yamaha into the soft-stuff once more and was lucky to emerge from underneath the bike unscathed. Vialle made short work of Van de Moosdijk and went 2-1 for his third win on the trot.

“I don’t know what happened,” was all Geerts could say of his 1-7, which still gave him 3rd overall. “It came so unexpectedly, and I was stuck under the bike. I don’t know, I really don’t know.”

Geerts has the same amount of moto wins this season as Vialle. They are both on 11. He’ll need to produce his first 1-1 of the year to gain some momentum and confidence and try to increase the pressure on his foe, who is only in his second GP season but is demonstrating few signs of weakness in a staggering rate of development. The gap between the pair climbed to 61 points and Vialle has finished outside the top five in only two motos from 28 this year.

The hardest working rider at Lommel on Wednesday was arguably Jago Geerts’ teammate Ben Watson. The Brit scored a second podium finish in a row for the first time in his career with a personal best result of second overall. He managed it despite lackluster starts and needing to recover ground from the depths of the top ten on both occasions. Watson’s attacking style was excellent to watch. At his best he was passing Van de Moosdijk for second position at the end of the second moto with a long, glorious line around the left-handed sweeper. At his worst he came close to a major ‘ejection’ through the rutty waves section late in the same race; it was a part of the track he was barreling through unlike any other rider in the class.

“Two terrible starts today and I made it really hard for myself but I felt so good and could continue pushing to the flag,” he said. “I was happy to make a lot of passes, especially at the end although I made a big mistake in the waves and was lucky to stay on. I got back into a good rhythm straightaway and felt so strong that I took the opportunity to catch and pass Roan, even though it didn’t change the overall podium for me.”

Team principals Marnicq Bervoets and Hans Corvers were as pleased for Watson as they were that Geerts was unhurt after his second moto prang. Bervoets has frequently willed Watson to be more aggressive, more proactive, and less ‘nice’ in the opening stages of motos during his three years with the Belgian crew and the guile and appetite on display for a second time in just a few days across MXGP’s toughest track was further evidence that the 23-year-old is a true slow-burn talent (even if his trajectory did stutter in 2019 due to two injuries). MXGP beckons for 2021 due to the age ceiling but there are vast possibilities for one of the UK’s few remaining potential stars at this level.

MX2 also saw Sweden’s Isak Gifting ride the factory GasGas to an eye-catching fourth overall while Spain’s ‘next Prado,’ Ruben Fernandez, was sixth. Props also to Rockstar Energy Husqvarna’s Jed Beaton for two 10th place finishes despite being chewed up in a start straight crash in the first moto; the Aussie pushed all the way from a sizeable deficit behind the pack to 10th after remounting.

4. Lommel Gets Ready For The Dozer

If there was ever a track on the MXGP calendar that could be significantly altered in short space of time then the all-weather ‘sand pit’ on the side of Lommel’s vast industrial park is the chief contender. The one-day break between the first of the triple-header last Sunday and the final 2020 European EMX250 Championship race on Tuesday (Thibault Benistant—make note of the name after the French Yamaha rider won EMX 125 in 2019 and then added the other Euro crown to his flowering CV at Lommel; a factory MX2 Yamaha ride beckons in 2021) meant Lommel was largely the same on Wednesday as it had been for the Grand Prix of Flanders hours earlier.

With 24 hours more to work with, the fast layout will now undergo a significant overhaul for round 15. Three corners will be removed and two longer straights and rhythm sections added. The ‘Grand Prix of Lommel’ this coming Sunday promises a new route in the sand. Then comes the dash to northern Italy for another trio of races in one week to get the season wrapped.