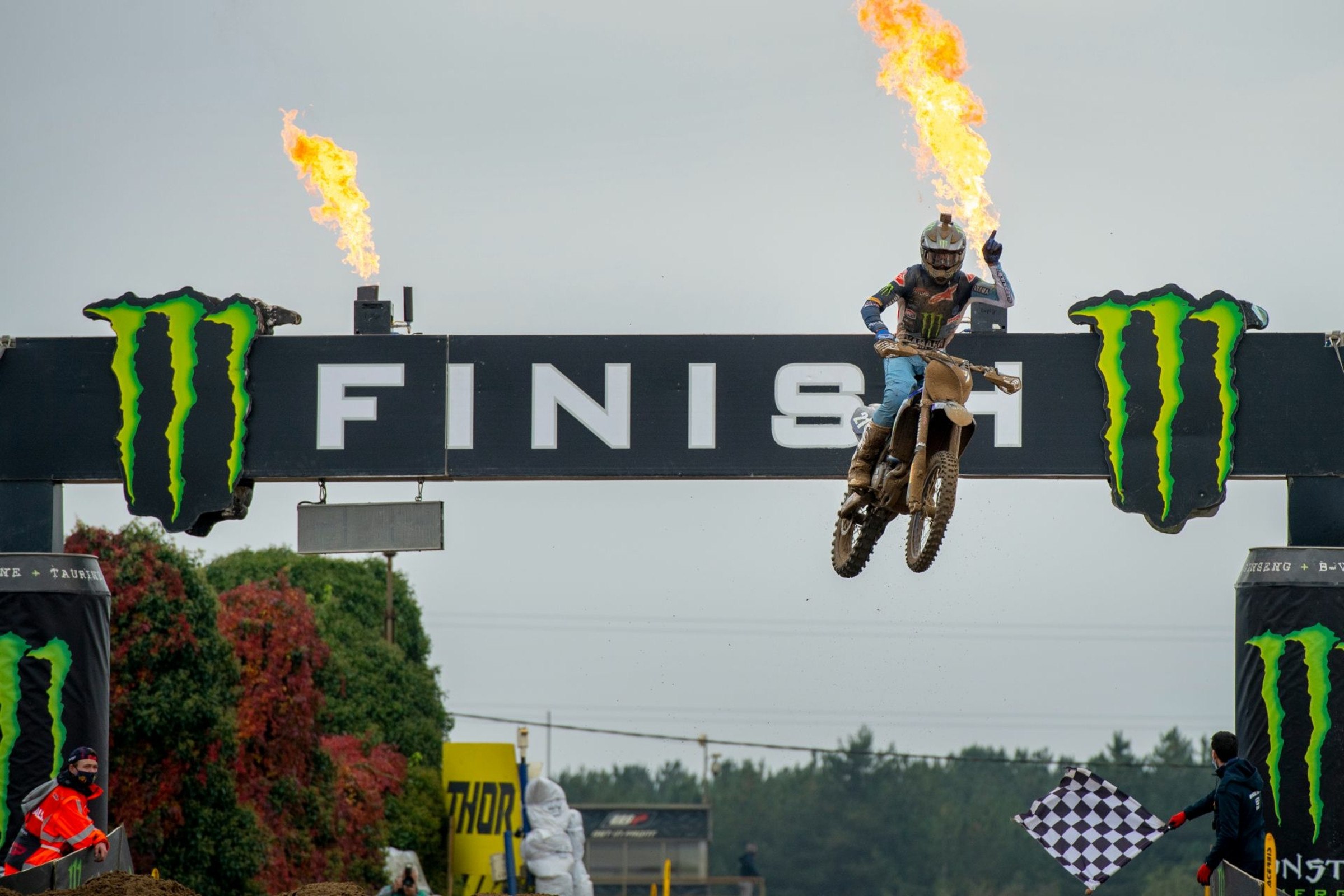 In the first Grand Prix of the triple header at Lommel, Gautier Paulin defied some of his detractors and delivered his first moto win in three seasons and first overall podium finish in over a year. The Monster Energy Yamaha racer and Team France talisman for the Monster Energy FIM Motocross of Nations is one of the premier names in MXGP since joining the blue-ribbon category in 2012 and has ridden for Kawasaki, Honda, Husqvarna, and Yamaha factories. Doubts hang over his future for 2021 with rumors that his place ‘in blue’ will be taken by Glenn Coldenhoff but the 30-year-old could still remain on the YZ450FM. Paulin is seventh in MXGP at the time of writing (through round 14 of 18) but last Sunday he emotionally revealed that he’d been secretly dealing with several fractured vertebrae after a training crash during the COVID-19 lockdown. We asked for some of his time after the Grand Prix of Limburg on Wednesday.

Racer X: Three Grands Prix at Lommel means the fourth triple header of 2020…but is it the toughest because of the track?
Gautier Paulin: On the technical side it’s tough because with three in a row you cannot really change much or test much and you have to click-in really quickly. You might think the track will be exactly the same but the weather forecast and changes means it can be very different. Physically I am definitely getting better at absorbing the demands and organizing myself better for three-in-a-row. Here in Lommel it has been really tough even though it went well for me today. The results were not there [12th overall] because of some issues with the bike’s engine but the second moto was great and I was pushing back from a bad start. I could see other riders were struggling.

Last Sunday was your first win for a couple of years. It produced an emotional reaction that is unusual for you. What did that mean for your confidence and being able to show you can take the checkered flag again?
It was really emotional. When I train then I do it to be #1. It is what I believe and what I live for. When I commit then I do it with the best momentum, with my diet, sleeping, the family side. I do it all for the result. So, everything that has happened had been really frustrating. I did not want to mention that I had broken my back in May. Only the close people in my team knew it. Why? Because it was a really hard crash and I really knocked myself out. I woke up and wondered why we were not racing and asked if there was a virus happening or not: it was very weird. The championship was supposed to be starting again on the 6th of June and I wanted to work back from that crash strong and quickly. Having people asking “How are you? How are you doing?’” doesn’t help. It was a way to break from always justifying myself. So, I went into a zone of a lot of treatment and work and then I went to Latvia and broke my finger. It was hard to swallow. We had three races in a row there and I was already coming back from injury and had pain everywhere. I was good in Faenza but crashed there and hurt my back again, so Faenza ‘2’ and ‘3’ was really tough. Having a problem in the first race of a triple header makes the second and third races hard to manage. Finally, I was good in Mantova: top three in the lap-times and second but the final result wasn’t there. So, coming to Lommel and winning a moto and finishing second overall I felt it was time to tell all the team and everybody what had been going on. It had been a weight for me. I was really happy because it had felt like a long way back, and when you are behind the gate then you are there to race, not to show excuses. If you want to make excuses then stay home. You need to be straight with yourself and look forward.

The downside is that people just assume you are not good enough or not fast enough anymore…
I know I have opened myself to that. I know there I have provided the stick to be beaten by the haters and the people that want to speak badly. But they are not on the track seeing how rough the corners are and how fast are the others. It is easy to be behind a world champ. It is not easy to find a new one or be behind someone who is recovering. We can talk forever about this…but I do what I do for myself. People can say “You are finished” and they might look at the race today and see “Paulin is now 10th and last week he won.” I’ll say, “Yeah, come then buddy…” and explain how the bike was not running well from lap two and how I rode so hard all moto just for it to break on the last lap. I gave all my energy for that: to DNF on the third sector of the last lap! F***!

You’re a passionate guy for motocross but, this year, how do you feel about the crashes that have happened for Arminas [Jasikonis], Glenn [Coldenhoff], and Jeffrey [Herlings]?
And myself. I was right behind Jeffrey when he injured himself in Faenza and he had exactly the same crash that I had back in May. I saw him. I was exactly the same as him on the ground. It is ‘that’ side of racing. The sport is going faster, we are all fitter and the bikes are all working better and you pay for a small mistake in a big way. It is really tough. It is why I am the kinda of person that gives everything for the sport. You cannot afford to give away even 1 percent. Sportsman are selfish and I know I am with my family and I know they are fully behind me to push and put me in the best position. When you injure yourself it is a really tough one, especially when you are lying there and you don’t really know what you’ve done. You think on forever when you are on a bed, not moving and waiting for an MRI. It’s a nightmare. We really need to be fit to try and be smarter than ever, to be healthier and focused than ever. We all have high goals.

How do you feel about the future now? The pandemic has affected racing budgets. There are not many saddles in the paddock, riders like Clement Desalle are choosing to retire. How do you feel about your situation?
I have been stepping away from thinking about the future just because of the whole story this year. We had already been negotiating for the 2020 deal and the cuts because of the virus and it produced some anxiety. Then to injure myself and trying to come back and perform; I put it to one side. For the future I have not signed any contract yet and I will give some news before Italy about what I will do.

We see plenty of young French riders-
Sorry. You also mentioned budgets. I have been—and I am—one of the guys on big deals. Motocross needs people. It is not a big, popular sport but people know about it when it’s mentioned. Most bikers start out on a motocross bike as kids. We see F1 drivers doing motocross and I have downhill racer friends who ride MX. So, the sport needs riders. I see some now who are paying to ride and they have a factory bike! I think it is a joke. It is definitely not right. They are not paying ten thousand euros, they are spending hundreds of thousands. I don’t believe this is the right way. I see some riders in MX2 being paid less than a mechanic. As a sportsman you need money to take care of yourself and prepare yourself whether that’s eating, traveling, training. Applying quality to your job. When I see the turn motocross is making I think it’s very tough. Okay, the virus has had an effect, but it is not all about the virus. All the teams here want to perform and we should not lose this priority from our vision. I feel a bit sorry for the people who pay to ride. I can look at myself in the mirror because I do what I can to bring myself up and for my future. I don’t leave the s*** for people. If someone like Clement decides to step away then I feel sorry about that. He mentioned the tracks and it is true that some are tough for passing; Spain was a beautiful track but it was hard for overtaking. It means something is missing-

It becomes more like a job?
No, I’m always happy because I love my bike. The day it is a job then I am away. Far away. I have personal rules in my mind. Anyway, I’m feel sorry that some riders are being paid so little.

Lastly there are some amazing French riders coming through still. As an ‘elder statesmen’ and someone who has been a leader for your country and the Federation how do you feel about that?
I want to be humble saying this, but I think I’ve always tried to have the best image by not being negative about the racing. We know motocross is dangerous but I don’t want to promote this fact. I’ve worn that Team France jersey for a long time and for sure it can motivate the younger generation. If you are wearing the flag at the top of the sport then you feel the support, the friendliness and the family part of it and others see it and also want to reach that. I’ve tried to present myself well and correctly and show the best of the sport. Sometimes I demand a lot of myself and want things done a certain way, but this is for the correct reasons. I don’t like to show emotion because I know kids are watching. We don’t really see the audience we have but we know kids will see and copy the way we are. I tried to smile and be positive because all of this is still a privilege. I’m also lucky that people have chosen to listen to me, like the French Federation. In France they do such a good job for the kids and for the tracks and having strategies like buying new tracks to keep motocross alive. They are open-minded, and I’m proud of that. In MX2 the kids are really near the front. I’m surprised about [Mathys] Boisrame’s speed, Tom [Vialle] about his consistency and Max [Renaux] with his will to fight at the front and Thibault [Benistant] with his [EMX250] title and [Tom] Guyon making a lot of holeshots. In 125s there are a lot of kids. When I see them now in the paddock or around I can see they are a bit shy towards me. I’m happy not to have any bad image or feeling in the sport: it’s not something I’ve worked towards but more who I am.