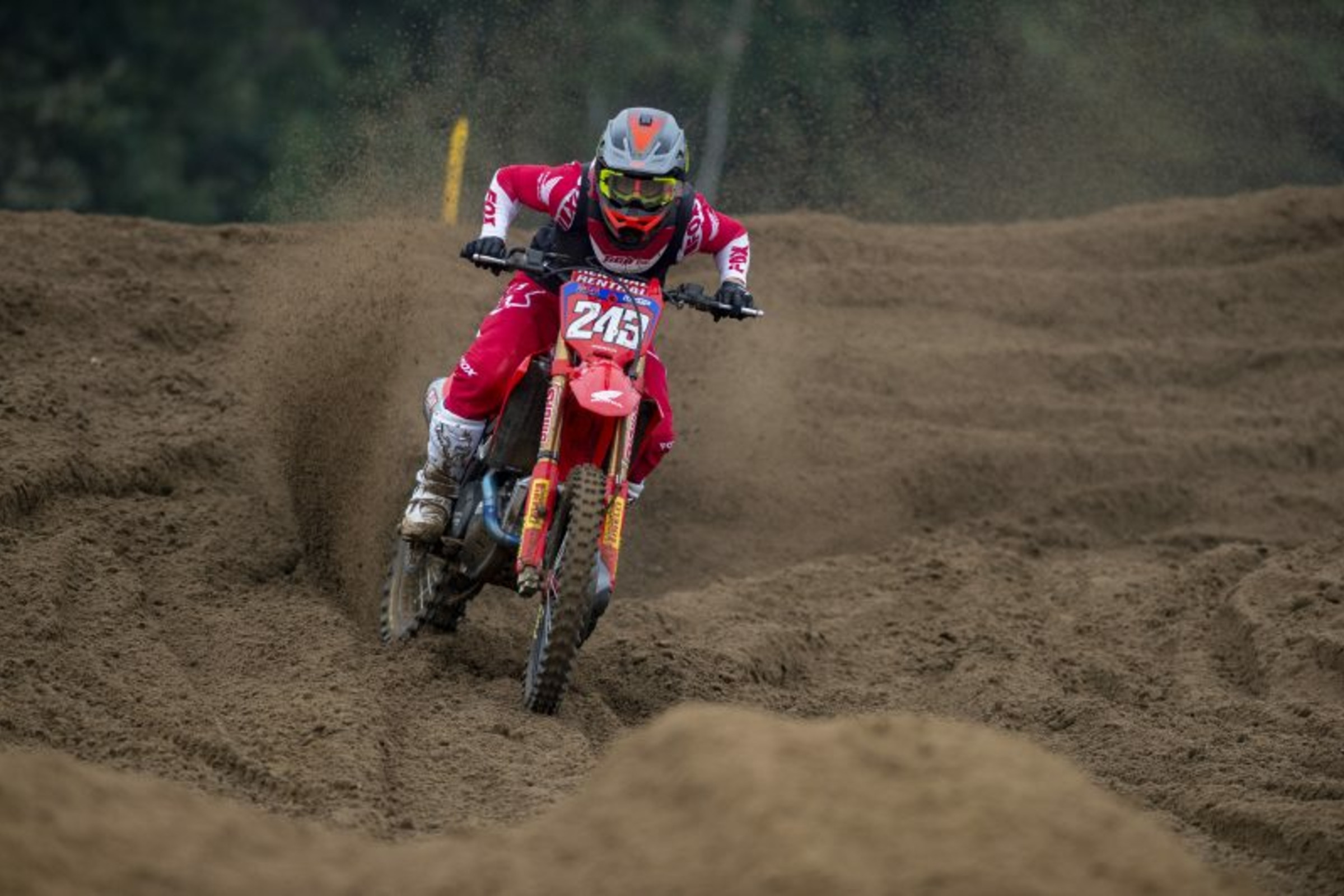 GP Report 4 Takeaways From the MXGP of Flanders

Gajser makes another stride, Vialle survives the sand attacks, and the paddock braces for three races on the toughest circuit on the calendar.

MXGP made the swift movement north from Spain through Europe and arrived exasperated to Belgium. After four rounds and more than three weeks on the road and chased by closing borders and international policies enforced by rising COVID-19 numbers, the FIM World Championship planned to tackle the roughest, toughest and baddest circuit on the calendar not once, not twice but three times in the space of seven days. The sand would help drag MXGP to rounds 13, 14 and 15. It would be the hardest week of the season and perhaps any season.

The soft sand carved into a litany of bumps and ruts and again created a feeling of a lottery. The Grand Prix motos were proliferated with small mistakes that—at best—caused a loss of time or a position and—at worst—well, much worse. The Grand Prix of Flanders began on an auspicious note with Gas Gas Standing Construct Factory Racing’s Glenn Coldenhoff suffering a heavy accident in practice. The medical attention and period of worry was reminiscent of Arminas Jasikonis’ crash in Mantova two weeks previously and Jeffrey Herlings’ spill at Faenza in September. Lommel was also the scene of Coldenhoff’s pre-season fall ahead of the 2019 campaign where he broke his back. The first word from Gas Gas on Sunday morning was that the Dutchman had fractured two vertebrae but had full feeling in his body. It was a relief but also another stark reminder that three outings at Lommel would be a case of limiting attrition as much as expanding world championship points tallies.

Lommel is well known as a popular training venue but the Grand Prix always brings added pressure and an increased technicality to the layout. For this event the course was fast and inviting but also punishing; the sand grabbing and throwing bikes around at a whim.

There was something quaint and appropriate about a second MXGP moto pile-up between four riders that left three bikes vertical poised and perpendicular like some radical motocross sculpture. For the first time this season Red Bull KTM did not win a moto from the four in both categories but they did own MX2 thanks to Tom Vialle and his sixth overall triumph. The premier class saw HRC’s Tim Gajser made a statement for the second year in a row.

2. Gajser Makes A Move For The Title

The Slovenian was lucky to escape a weird looking fall in the first moto that pitched the reigning #1 arms-first into the sand. He had been leading, but he 24-year-old conceded the race to revived Monster Energy Yamaha’s Gautier Paulin. He made amends with a comfortable ride in the second run. Gajser’s 2-1 meant a second overall win from the last three rounds and some timely form as the championship hurries to a conclusion. Gajser was quick to credit the vast amount of testing work his team had performed with the all-new 2021 Honda CRF450R to be ready for the sand.

Crucially he prospered as Tony Cairoli faltered. The Sicilian could only take his Red Bull KTM to ninth overall and Gasjer was able to double his 24-point lead to 48 in one swoop. Cairoli had less trouble from his injured knee.

“I had some good treatment this weekend and I’m really happy about this but I’m still insecure in the corners although I don’t have as much pain as before,” he said. Cairoli still wasn’t able to post a decent timed practice lap and his 14th spot in the gate was a factor in two complicated starts where he was pushed wide and out of reckoning for the podium. A first moto crash after a run-in with the quick but erratic Dylan Walsh initiated a tiring trawl to 13th. In contrast to Gasjer’s happiness Cairoli could barely disguise his distaste. “We expected a better result here. We’ve had some good races at Lommel in the past, so I’m a very disappointed.”

Cairoli was again upstaged by teammate Jorge Prado. The 19-year-old posted yet another holeshot in the second moto and would have taken a top-three result if two lines hadn’t come together with the pursuing Jeremy Seewer. The Swiss rider stayed up while the Spaniard fell after contact. Still, Prado walked the podium for the seventh time and moved level with Seewer to third in the championship.

MX2 series leader Tom Vialle should have been soundly beaten at Lommel. It’s a home patch for his principal rival, Monster Energy Yamaha’s Jago Geerts. Again, he upended expectations, while first-moto mistakes in the lottery (the bumpy and unpredictable track) hurt Geerts badly.

Vialle was a rookie in the sand in 2019 and his novice stature was evident when he struggled in the final minutes of the motos. Now, the combination of Vialle’s confidence with the red plate, his attitude, and his work with Joel Smets has created an all-round star ready to join KTM’s illustrious list of champions. His 2-2 from his 15th and 16th holeshots from 26 races was followed by steady and mature performances, only blighted by a small crash while trying to relegate Geerts’ impressive teammate Ben Watson from the lead in the first moto.

Overall Vialle gained one point over Geerts to click his margin up to 53 points at the top. “Three years ago I was riding the European Championship here and I think I finished 30th and 27th in the races! So to win at Lommel in my second GP makes me really happy,” Vialle said through his facemask.

Geerts was the fastest rider on the sand. That rapid speed somehow led to at least two mistakes in the first moto. At one stage he had to work diligently to recover from the depths of the top ten to reach fifth place. In the second race he led from the start, weathered late pressure from Vialle and took his 11th checkered flag. He and Vialle share the same amount of moto wins: 22 from the 26 in 2020. Some were anticipating a show of Geerts dominance, and that second showing hinted at what he could still dish out in the remaining four motos at Lommel. In one sense Vialle minimized the damage and scratched another date away from the five that remain. If Geerts does want to prise the red plate away from the KTM then he needs to back-up his superiority in the sand with consistent moto scores. The pair have been rattled by riders like Maxime Renaux (fourth here), Thomas Kjer Olsen (fifth), Roan Van De Moosdijk (sixth, and let down by a first moto tangle with a backmarker) but they might have to watch out for Watson this week. The quiet Brit became the UK’s first moto winner in over a year and the first in MX2 for four years. Some hastiness and a slip in the second moto prompted a Geerts-style comeback to fifth for the 23-year-old; otherwise he would have quite easily been capable of third which would have delivered the overall win.

4. Paulin Out Of The Cold

Gautier Paulin last won an MXGP moto in April 2017 (also in the sand, but that of Valkenswaard in Holland) and hadn’t walked a podium since the summer of 2019 (Germany). In fact, his first moto success was only his second top three moto result this season. The Frenchman, who could be out of the Monster Energy Yamaha team after two years (the manufacturer are curiously taking their time to confirm and announce their 2021 line-up), broke down in the post-race press conference when he described why he hadn’t been able to trouble the leaders in a term where there have been seven different GP winners, eight moto victors, and nine on the podium.

“This is an emotional high,” he said before his voice waivered. “It has been long time since I’ve had a win. At the end of May I broke my back. I broke a vertebra; I did not really talk about it, but it was a really hard time. Right now, I’m 100 percent and I’m ready to fight again.

“I have just focused on putting myself at my level,” he added. “There has been a lot of anxiety around and I have put everything else on the side. It is a tough period when everything changed because of the virus. The goal was to be 100 percent and to enjoy what I do, because, I can tell you when I was racing at Faenza for 10th spot I was going home pretty sad and frustrated.”

Paulin finally produced competitive starts for his 1-5 and was a reminder that the ‘older’ generation can still trouble MXGP in a week when Clement Desalle announced his retirement at the end of 2020. Another retiree—Thomas Covington—was more immediate with his withdrawal. The sole American in the world championship had departed the series before the Lommel Grands Prix, which was the site of some of his best speed (as well as the surface on which he demonstrated the depth of his adaptation to the demands of world championship motocross).

Who will have the energy to go full-out again in a matter of hours?