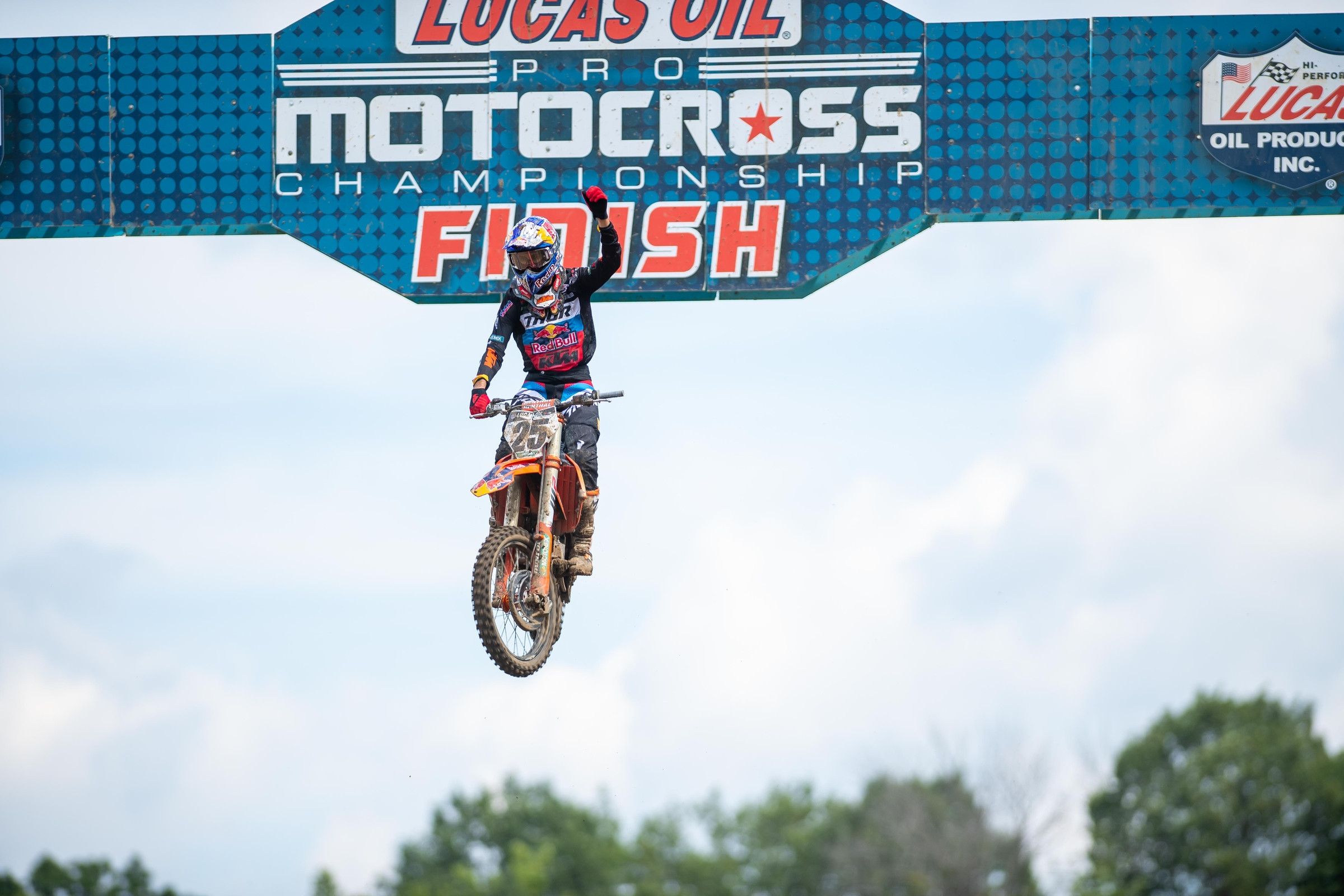 We’re still dealing with a small sample size in moto scores this year, but the trends are there. The 450 class has created freight-train battles with bullet train speed, and the 250 class presents a mano-e-mano battle between two determined, battle-hardened veterans. The final round rounds sure should be fun to watch, but we don’t want to forget the key moments that made the first half fun, exciting, heartbreaking, challenging and more.

superman: Adam Cianciarulo crashed while leading a moto at the Loretta Lynn’s opener. Should have been a huge deal. However, um, how do we say this...? We’ve seen Adam lead races before only to crash. Agree? So his Loretta’s 1 superman looked like just another in the lesson plan for his 450 career (after a 250 career filled with such moments). Well, since then he’s been damned solid. He left Loretta’s 1 12th in points. Now he’s third, with moto scores of 3-5-3-4-5-1-3 since that crash. That’s legitimately consistent!

A-Mart in the Mud: Alex Martin turned a holeshot into a moto win at Loretta 2’s second moto. He also had the holeshot in moto one but crashed. So, he went 7-1 for third overall. Holeshots really help in the mud, so had Alex not biffed it in some dozer ruts on the first lap, he coulda’ shoulda’ woulda’ been looking at an overall win, his first since 2016, JGR’s first outdoor overall since 2015, and the RM-Z250’s first overall win since 2009. Since then, Alex has been his solid, consistent self, but not quite in the hunt for overall wins. Oh, the ones that got away.

Re-Arrival: On that same muddy day at Loretta’s, Max Anstie led the majority of the second 450 moto on his Twisted Tea/HEP Motorsports Suzuki. Max is a great personality, and hey, who doesn’t like the Brits? A lapper ended up slowing him just as Zach Osborne was making a big for the win, then Marvin Musquin foiled Max’s last ditch, last-lap passing plans. Still, it was awesome to see him up there.

Double DNF: Let’s face it. Nothing has impacted the series like the three-time and defending champion Eli Tomac failing to get to the finish in both motos at Loretta’s 2. This wasn’t a good moment for anyone involved, but his double-DNF at the mud in Loretta’s will be referenced for a long time if he ends up missing his fourth-straight AMA 450 National Motocross Championship. Yes, Osborne and company have been super strong and have earned their accolades, but Tomac’s bad day is Exhibit A in the racing-is-unpredictable museum.

The Collision: Fans are usually looking for drama between title combatants, but it doesn’t always come. However at RedBud, the 250 title story entered another chapter when Dylan Ferrandis hit Jeremy Martin from behind. Ferrandis far too often has to make quick passes coming through traffic, a byproduct of being ridiculously fast but not getting good starts. That’s what we got here, and Martin will be sure to use it as motivation, taking this championship battle into different territory.

The Comeback: Ferrandis has some high-profile run ins (run intos?) this year, but those are just a small percentage of the passes that he makes. His 40th-to-third charge at Ironman was a thing of art, science, brawn and beauty all wrapped into one.

The Battle: The 450 class has been straight fire since the opening gate drop, but Ironman’s second was the best of the bunch, with Justin Barcia throwing his Yamaha sideways while coming through traffic—withEli Tomac. It was a thing of beauty to watch them charge together, then push to the limit right to the checkers. Races like that are so good, even Barcia and Tomac, long time rivals, could only show each other respect.

Karma Police: At Loretta’s 2, Brandon “The Brick” Hartranft’s KTM finally gave up in the mud. Moments later in the same turn, RJ Hampshire lodged his front wheel in a rut, and his bike would not come out. So Hartranft, realizing his race was done, helped lift Hampshire’s bike out of the slop to keep him going. A week later, The Brick scored his first overall podium at Ironman. Good things come around!

The Other Practice:Zach Osborne has built a nice points lead, but you can think back to that weirdo morning at Loretta’s 2, when his bike didn’t fire, for a guide on how quickly points can change. That was high drama stuff, but since Zacho made it into the motos anyway (through the B practice) it seems inconsequential now. But at the time it nearly became the most memorable of memorable moments.

Marv’s Back: Some nice synergy to Marvin Musquin scoring the first-moto win at Ironman, almost exactly a year after he hurt his knee, at the same track where he got hurt in the first place. He also won the first moto at Ironman in 2019. Full-circle stuff!

Double DNF: This wasn’t a good moment for anyone involved, but Eli Tomac’s double-DNF at the mud in Loretta’s will be referenced for a long time if he ends up missing his fourth-straight AMA 450 National Motocross Championship. Yes, Osborne and company have been super strong and have earned their accolades, but Tomac’s bad day is Exhibit A in the racing-is-unpredictable museum.

Masterpool’s Moment:Ty Masterpool returning to racing, grabbing a holeshot in his first moto and pointing to the heavens to honor his late brother, Jesse, is a legendary move. Ty going super fast all weekend at RedBud and re-establishing his bona fides as a prospect was just icing on the cake.

The Other Side: Meanwhile, Jett Lawrence creeps closer to first career overall podium. He went 4-5 at Ironman, he got third in the first moto of RedBud 2…only to have Masterpool crash right in front of him in moto two, leading to a huge endo. Podium hopes, gone. But young Jettson was nice enough to check on Ty’s condition before he went about pulling their bikes apart!

The Debut: Chase Sexton qualified fastest overall in the 450 class at the season opener. Nobody expected him to be slow, but that pole performance established he would be legit on the big bike. Since then he's been very good too, and when the rookie figures out a few more things he'll be a real threat every weekend. Or even a Friday or Monday.

Missing Men: The nutso 450 class has produced seven moto winners and great action in each race. Hard to believe it’s thinned by injury. Cooper Webb was the fastest rider in the first qualifying session of the season…then reaggravated a back injury, which dropped him from remainder of the series. Jason Anderson stomped everyone to win the first moto of the year, only to reaggravate an arm injury a few weeks later—ending his season. Before the season began, Ken Roczen opted out. The moments feel like they happened months ago, but the mind boggles at what these motos could have looked like with these boys in the mix

El Chupa Sighting: Seriously, where does Blake Baggett’s random speed come from? And where did he come up with that pass he used on Osborne to take the lead at RedBud’s second moto? In a year of surprises, it almost feels predictable for Baggett to  find random super speed for one session of 30 minutes plus two.