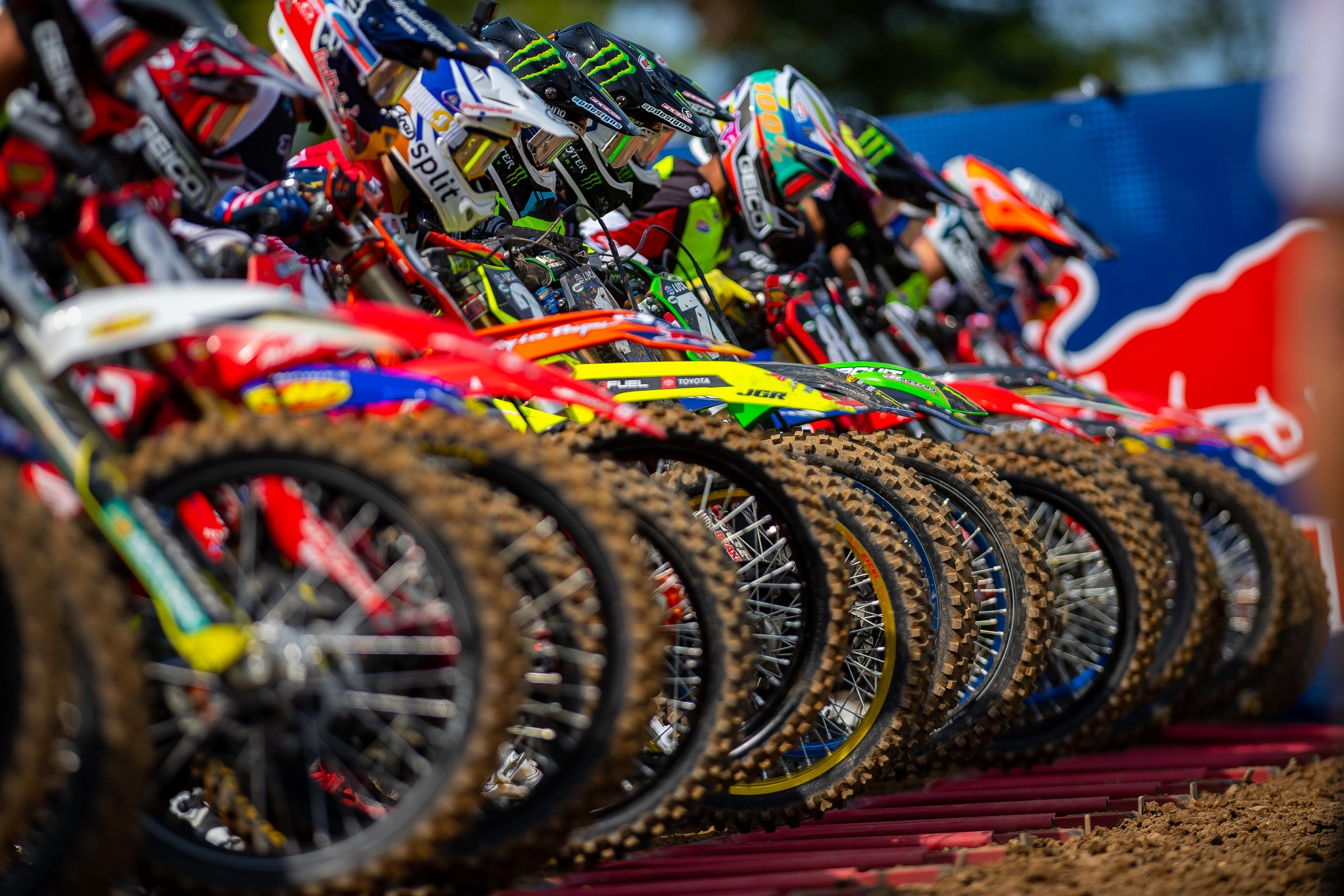 Please explain the difference between training blocks at home (with time off) compared to in-season training programs.

The main difference is in the amount of time available, which allows for big workloads and the necessary recovery afterwards. During the season, trainers are always worried about ensuring their rider is 100 percent on Saturday morning. Working hard is great, but if the rider wakes up tired and can sense he hasn’t recovered when while he’s putting his gear on before the race, well, there’s a sense that it’s going to be a long day. In that case, the hard work is doing more harm than good.

Weekends off present a window of opportunity to raise the effort level, especially in that first week. The first few days of last week were used to recover after a double-header weekend, then a hard day or two to end the week (35 minute moto’s, longer bicycle ride, gym work), followed by more rest over the weekend. This week leading up to Spring Creek would be the standard race week. Race week usually consists of a few motos to maintain endurance, sprints to work on qualifying speed, and start practice. They will also do a one hour-ish bike ride each day and a lot of stretching. Most days during the season are very repetitive but not terribly difficult, either. It’s all about finding the balance of putting in enough work to be incredibly strong, but most importantly, incredibly strong on the right day.

Do you think the extra-long season is grinding some guys up?

I haven’t bought into this theory as much as some. The caveat here would be if riders just kept hammering during the quarantine time of March and April, and then never took time off after the SLC SX stint. If they just kept going full bore (I don’t think many did), then absolutely they would be feeling it right now. This is going to be the latest end to a Lucas Oil AMA Pro Motocross Championship season that I can ever remember, so not only is it a longer season in 2020 but there will be less of an off-season than ever before, too.

Does the weekend off leave everyone refreshed, or did some riders already pack up the tent?

We are entering the time of the season (regardless of the month) where those riders that are really struggling or dealing with a nagging injury start to lose interest. If things are going poorly, it would be easy to begin thinking of January 2021 and the preparation for that. The inverse of that are the riders in championship contention or those aiming for a new contract. They will know that opportunity lies directly in front of them. Not only do they have four races to accomplish their goal but they will also know that some of their competition has already changed their focus to next season.

Is pressure going to be a factor with Zacho trying to close this out?

I think that will depend on how the points lead situation plays out. With a larger gap, the pressure is easier to manage. If things tighten, the pressure will ratchet up. The good news for Osborne is that he has been here before. He has won two regional SX titles and one 250 Lucas Oil Pro Motocross title, giving him experience with managing a points lead. He will be more nervous than the rest of the field, of course, but that’s normal for the red plate holder. Most importantly, I feel he is comfortable with where he stacks up against the field right now. He hasn’t been gifted this lead, he earned it.

Will Zacho race to win or have we entered the dreaded "he can just take a 2-2 every weekend" stage?

I believe the best strategy is to focus on the start above all else. If he can maintain these elite level starts that he’s enjoyed, the rest will take care of itself. Remember, he doesn’t “need” to win these races. He just needs to manage the series and keep the status quo points wise. Starting up front allows Zacho to stay out of trouble, as well as gauge his level of urgency compared to his rivals. I don’t buy into the “just take a 2-2” theory because that’s impossible to carry out in this field. Seconds are not easy to get! However, I do think he is in a position to take the races as they come where riders like Musquin, Barcia, and Tomac have to win and win now.

We've waited for that breakthrough big 450 win. Is Adam Cianciarulo now in position to go on a run?

I don’t think he will go on a “run,” but mentally it will be a touch easier now. The field is really deep and there are several riders that can win. That in itself lowers the chances for one rider to rack up several wins, including Adam. The biggest challenge for Adam will be to remove the motos and SX races where he loses double digit points in a single outing. Winning will happen for AC9, of that I am sure. Being in the mix every single weekend without a catastrophic incident is that last ingredient he will need to find on the 450. He figured it out in his last 250 Lucas Oil Pro Motocross season and will eventually get there on the 450, too.

Is Eli Tomac out of this?

It’s not over, but he needs help. First, he needs to help himself by winning several motos as the series closes. Second, he will need Osborne to have some sort of issue. Winning alone won’t be enough to erase a 47-point gap in four races. Having said that, winning plus an issue for the #16 could change the entire dynamic. Momentum rolls downhill so watch for which way the momentum is going as we leave Spring Creek. If Tomac is still 40 points out of the lead on Saturday night, it’s going to look much more bleak.

Are you surprised how the 250 class has played out?

Yes! Leaving LL1, I felt that Ferrandis was going to run away with this. He seemed to have every detail on lock. He was faster, his starts were good, and his fitness was on point. Since then, nothing has really gone to plan. Jeremy Martin, however, has capitalized at every turn. Instead of a Ferrandis snoozer, we have a full blown duel headed down the stretch. Emotions are high after the RedBud tangle, the points are tight, and the stage is set.

Ferrandis, J-Mart, A-Mart, McElrath, Hampshire, etc. veteran 250 guys are rolling. Are we going to get some of these 250 kids finally breaking through or is it just too tall a task against established pros?

I think the vets are simply a bit better right now. Ty Masterpool has shaken it up a bit with his starts and elite speed but the other guys have some work to do. Keep in mind, Ferrandis and J-Mart are 26 and 27 years old, respectively, so it only makes sense that they have the experience to best their younger competition. We have seen the more experienced riders dominate the series thus far and I don’t see that changing down the stretch.