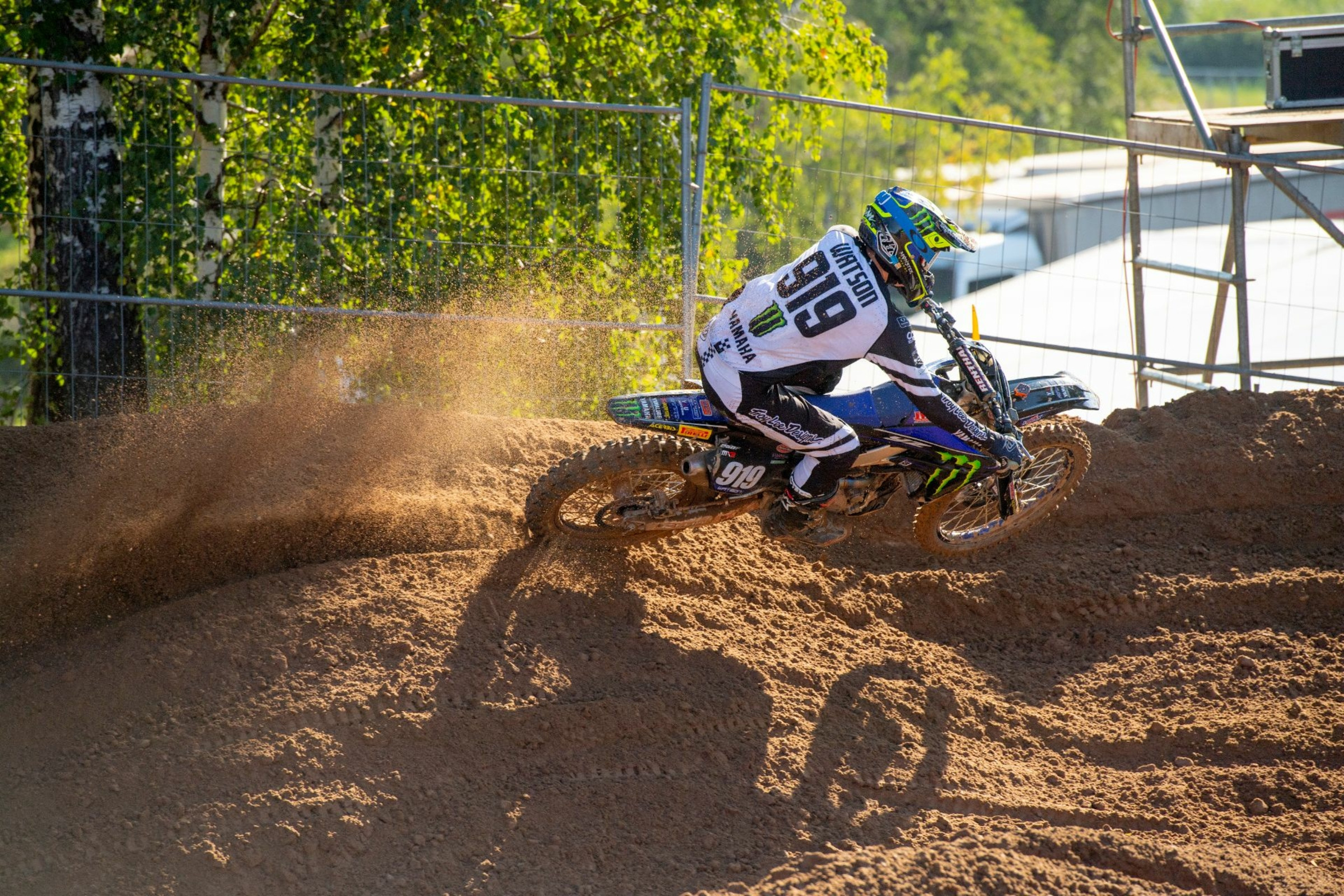 “3-5 for 4th overall. I was a bit off all day today, I didn’t have a great feeling but hey I won’t complain. My first ever holeshot and we just missed the podium, thanks to everyone for getting behind me.”

So read the Twitter post Ben Watson manufactured a few hours after placing fourth overall in the third and final MXGP of Kegums, the end of the road for what was the FIM Motocross World Championship tripleheader staged in the nation of Latvia. A mere two points adrift of the podium that Sunday afternoon, the mixed bag fourth overall finish was somewhat indicative of the Monster Energy Yamaha Factory Racing rider’s new season, an early season which currently sees him slotted-in at seventh in the MX2 classification.

“I’m doing good,” offered the native of Nottinghamshire, England, when we tracked him down on Tuesday afternoon while he was holding station in Belgium. “Yesterday, quite late in the evening, I arrived back home here in Belgium from the races in Latvia. Today has just been a little bit of a lazy day and just chilling out and just sorting out the washing. We were away for 10 days, so it’s to get back and have a little bit of a chill day, really.

“Yeah, Latvia was pretty good for me,” continued Watson, reflecting back on his time in MXGP lockdown where he placed fifth, 14th, and fourth overall, respectively, in the three Grands Prix raced in that Baltic country. “The last Sunday GP and the Wednesday GP before were actually the better days for my riding, but the results didn’t really show that. At the last race, just last Sunday, my riding and the feeling from it wasn’t amazing, but the results were better just from the starts pretty much. Yeah, it was solid and I’m happy with it, but yeah, you always want to do a little bit more, don’t you? To just miss out on the podium by two points and stuff is a bit tough, but…”

But no matter what, he’s back to racing for the Motocross World Championship, isn’t he?

“Exactly! It’s been so strange and such a crazy time for everything. Really, I’m grateful just to be back racing and stuff. It’s been up and down. Yeah, we have a schedule in place, even right now, but we don’t know if is going really to stay the way it is. I think some things are still going to change a little bit yet, but I just hope that we can continue racing somewhere. I mean, we were supposed to be in Turkey on the sixth of September, but there is now a pretty strong rumor that this one won’t go ahead and now instead we are going to be doing seven or eight Grands Prix in Italy or something like that. Yeah, I believe these three races are going to be like Latvia with two or three races in one place and at one time.”

[Editor’s Note: an update to the schedule was announced after this interview had completed.]

“The Latvia races, the Italian races, it’s the same kind of schedule that you guys have in the USA right now,” he continued. “We’re just doing the qualifying and practice in the morning and then the two heats [motos]. You know, I quite like it. You’re in and then you’re out. Saturdays, wherever the GP is, are long days. We have a free practice and we have a free timed practice to get in position for a qualifying race start and then we have a qualifying race. On Sunday morning you then have just a quick warmup and then the two heats. There are a lot of sessions at GPs. Doing everything in one day at the moment makes it all a little more technical and little bit more tense for everybody when it is all done in one day and I like that. I mean I think everyone is just happy to be back in the paddock. We’ve just been away from it for so long. Whenever we come together again, it’s nice. Everyone is just happy to be back in an environment with everybody again. I feel pretty good. I’m happy with where I’m at right now.”

“Of course, that’s the goal, but I’m not the guy that is just going to come out and say, ‘Yeah, I want to be World Champion this year and if I’m not World Champion, then I’m going to be mad!’ For me, I have my goals in my head and that’s what I work for, but from the outside you can see who really has the capabilities to be able to do it or not. I’m not really saying anything incredibly special. I’ll be honest with myself. I want to be really fighting and to be at the top and to be winning, everything needs to really be in place. I just didn’t feel that great on Sunday, but some days I go a track during the week to do training and I feel amazing. Sometimes you hit corners and you hit the exit and you say to yourself, ‘Oh yeah, that felt that amazing.’ I’m still waiting for that feeling on race day or during the race after taking the holeshot or something. Yeah, that’s what keeps it interesting. You always want to do better. It’s like me when I’ve gone training or when I feel so good sometimes, it’s exciting to try and reach that point more often.

“It’s crazy, you know. Sometimes you can have an amazing race, and everything just feels right. Like at the last GP in Latvia I finished third in the first race, but I came off and I was a bit frustrated because I wasn’t feeling that race at all, but on the Wednesday before, I crashed in the first corner and I came back to ninth. I came off the track afterwards and I wasn’t buzzing, but my adrenalin was high because I made so many passes in one race. There was a lot of action going on and that race actually felt better to me than the third-place moto that I had. You know, some people look at results, but they don’t actually go into as much of the detail of what the rider may actually feel. Yeah, it was interesting just to see and feel yourself produce a third-place finish and not really feel that great about it.”

The nation of Great Britain casts a very long shadow over all things in the FIM Motocross World Championship, racers from the United Kingdom claiming 10 FIM gold medals since the sport’s official beginning in 1957. The last British World Championship coming in 2001 in the shape of one James Dobb, and now 22-year-old Watson certainly wants to be the next. Can he do it? Can he make it happen? And what is he going to do in 2021 when he’s mandated to move up to the frighteningly competitive 450cc classification?

“It’s a little early to look to the future because of what’s going on right now with the lockdown and all of that,” reasoned Watson. “If this was a normal season, we’d be coming towards the end of it. But right now, to be taking 2021, it’s still too early because here we are at the beginning of the season and it’s still too early for the teams and they may not have seen enough just yet to make decisions and moves. I mean, my goal? Of course, I finished fourth in the World Championship in 2018, but I just want to be better. I think to come away with a medal in the World Championship would have been amazing in ’18. I hope we still have a long ways to go this season and if course my goal is really the same and to just better myself is my goal. I’ve had a couple podiums in my career, and it would be nice to try and improve on the third place to second or to get a GP win and win as much as possible. For 2021 I move up to the MXGP class, but I’m really focused on finishing my MX2 career with having no regrets. I just want to give it everything and keep all my focus on finishing my 250 career good. Hopefully, from that, my riding will do the talking and I’ll have a great opportunity for next year.”