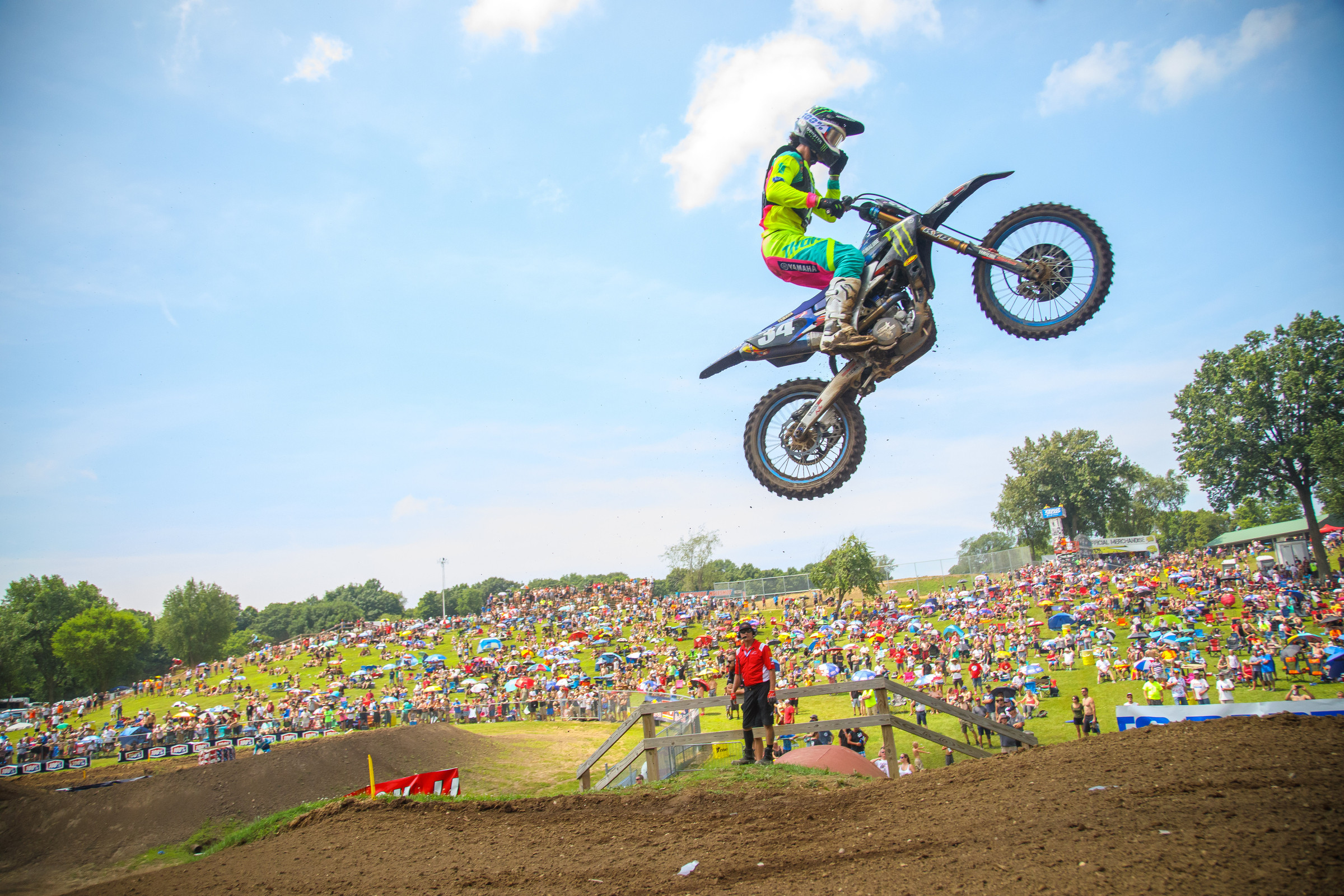 With the 2020 Lucas Oil Pro AMA Motocross Championship just days away from kicking off at Loretta Lynn’s Ranch in Hurricane Mills, Tennessee, we wanted to take one last look back at some of the best races you may have forgotten from the 2019 campaign. In a season eventually won by Adam Cianciarulo in the 250 class and Eli Tomac in the 450 class, there was no shortage of close racing week in and week out.

Of the 48 motos ran in 2019, we’ve pulled 10 of the best to relive what happened. Whether it was the titanic battle between Tomac, Ken Roczen, and Marvin Musquin at the Ironman finale or Dylan Ferrandis and Adam Cianciarulo battling to the bitter end at Washougal, there were plenty of great moments that cannot be forgotten. Here’s the top 10 motos from 2019.

In the second 250 class moto at the Pala National at Fox Raceway at Pala, Australia’s Hunter Lawrence made it known that he was here to be a player in America. After early championship leader Cianciarulo disposed of race-leader Shane McElrath, it appeared AC might check out to another victory. But Lawrence had other ideas as the GEICO Honda rider reeled in Cianciarulo and the battle commenced.

Lawrence would momentarily take over the lead before falling with just a few minutes left in the race. The crash would hand Cianciarulo the lead once again and he would not relinquish it. But the determined ride from the Aussie was his first big splash in the USA in what would become a successful summer for the #196.

After Roczen took an emphatic first moto victory at Hangtown, the skies opened up for the second moto creating a tricky racetrack. In tough conditions, the German looked to take his first overall win since his massive arm injury in 2017. After he and Tomac moved around holeshot winner Marvin Musquin early in the race, the two commenced in a terrific duel for the race lead.

Roczen did not need to win the race to win the overall and Tomac would eventually pass him back and establish a gap. But Roczen would manage his race well from second and hold on to 1-2 finishes on the day for a triumphant overall victory, a big step in his career comeback.

The first moto of the 250 class at RedBud was a fairly straight forward win for Ferrandis after he made an early pass on Cianciarulo for the lead. But things got dicey behind him creating one of the more interesting races of the season.

Cianciarulo nearly collided with Alex Martin over the finish line jump early and went off the course. As he accelerated down the side of the track to rejoin, AMA officials deemed his move dangerous and slapped him with a two-place penalty. Things could have been worse for Cianciarulo had Alex Martin’s JGRMX Suzuki not let go with two turns of the race remaining allowed Cianciarulo to bring it home third (fifth officially after the penalty).

The day eventually belonged to Ferrandis who went 1-1 and catapulted himself into a terrific second half of the season.

The second 450 class moto at Southwick was the culmination of one of the longest roads to the top of  the 450 class, as Zach Osborne was able to claim his first ever premier class moto win. Though the race might not be remembered for that as much as it is for another ridiculous Tomac charge through the pack.

Musquin claimed the overall win with a 1-2 score but Osborne’s moto win overshadowed Musquin’s elation while Tomac’s charge was a championship-salvaging effort for the Monster Energy Kawasaki rider. For Osborne, who had toiled all over the sport for years before finally finding his stride, a moto win in the big class represented a huge milestone.

The second 250 class moto at Unadilla saw Ferrandis grab a rare holeshot. Considering how well Ferrandis does even with bad starts, a holeshot made it seem like he could run away. Justin Cooper battled him early before Cooper fell to the clutches of Cianciarulo behind him.

Once Cianciarulo found his way past Cooper, AC put loads of pressure on Ferrandis trying to steal the win away from him and go 1-1 on the day. Ferrandis held on by just over one second over the line to take the win and the overall in what was their second great battle in as many rounds.

The mud-fest that was the Spring Creek National gave us a great second moto showdown between Cooper Webb and Roczen in a battle of who could make the least number of mistakes. Webb holeshot the race but Roczen quickly moved forward to take over the race lead.

Webb then caught and passed Roczen before falling from the lead past the halfway point. Roczen seemed to have the win in hand until Webb put together a late charge to pass Roczen with two laps to go and just narrowly hold him off at the line to claim his first ever 450 class overall victory.

After the first 250 moto was called early due to lightning in the area at the Thunder Valley National, Cooper was looking to claim his first ever overall victory after yet another first moto win. When he started out front in moto two, he had it all right in front of him for the taking.

Cianciarulo charged up to put the pressure on Cooper in a close fight, but then he went off the track. In one of the strangest moments of the season, Cianciarulo had to cut off a big chunk of the track to not endanger anyone behind him. He then rejoined the track right next to Cooper before slowing down to allow give Cooper a gap and try to avoid a penalty. Whether the confusion unsettled Cooper will never be known, but he did crash from the lead half a lap later. Cooper would charge back up to AC late but Cianciarulo hung on to win the overall. A protest was filed against Cianciarulo’s track cut but the result was upheld but the officials.

Washougal’s second 250 class moto was the best of the year. Ferrandis and Cianciarulo ran nose-to-tail for most of the moto as they disputed the race victory. Cianciarulo, who had said Washougal was one of his best tracks, led the points standings and was looking to stop the momentum Ferrandis had going.

Cianciarulo hounded Ferrandis for several laps, even attempting to launch over him into the sand section, but Ferrandis narrowly held on in a thrilling finish that saw the Frenchman claim a 1-1 victory on the day.

Moments before Ferrandis and Cianciarulo squared off at Washougal, Tomac put a beatdown on the 450 field at Washougal. Once again suffering a bad start, Tomac looked to have almost no chance at catching Roczen for the win once he passed up into second late in the race.

Tomac then clawed several seconds out of Roczen every lap before catching him with a few laps to go. The victory seemed to finally fall from his grasp after he fell trying to pass Roczen on the inside in the back section, but Tomac picked his bike back up and went even faster to catch and pass Roczen for a clutch race win.

It’s not often you get to see the three best riders in any series go toe-to-toe for lap after lap disputing a race victory, but that’s exactly what we got in the first 450 class moto at the final round at Ironman. With Roczen leading late, Tomac and Musquin slowly closed up to his back wheel making it a three-rider fight for the race lead.

Tomac tried a few times to get Roczen before Musquin found another gear with two laps to go. The Frenchman passed Tomac for second and went after Roczen making the pass for the lead just one lap later. The three continued to fight within bike lengths of each other all the way to the flag, where Musquin narrowly held off Roczen and then Tomac for the race victory.