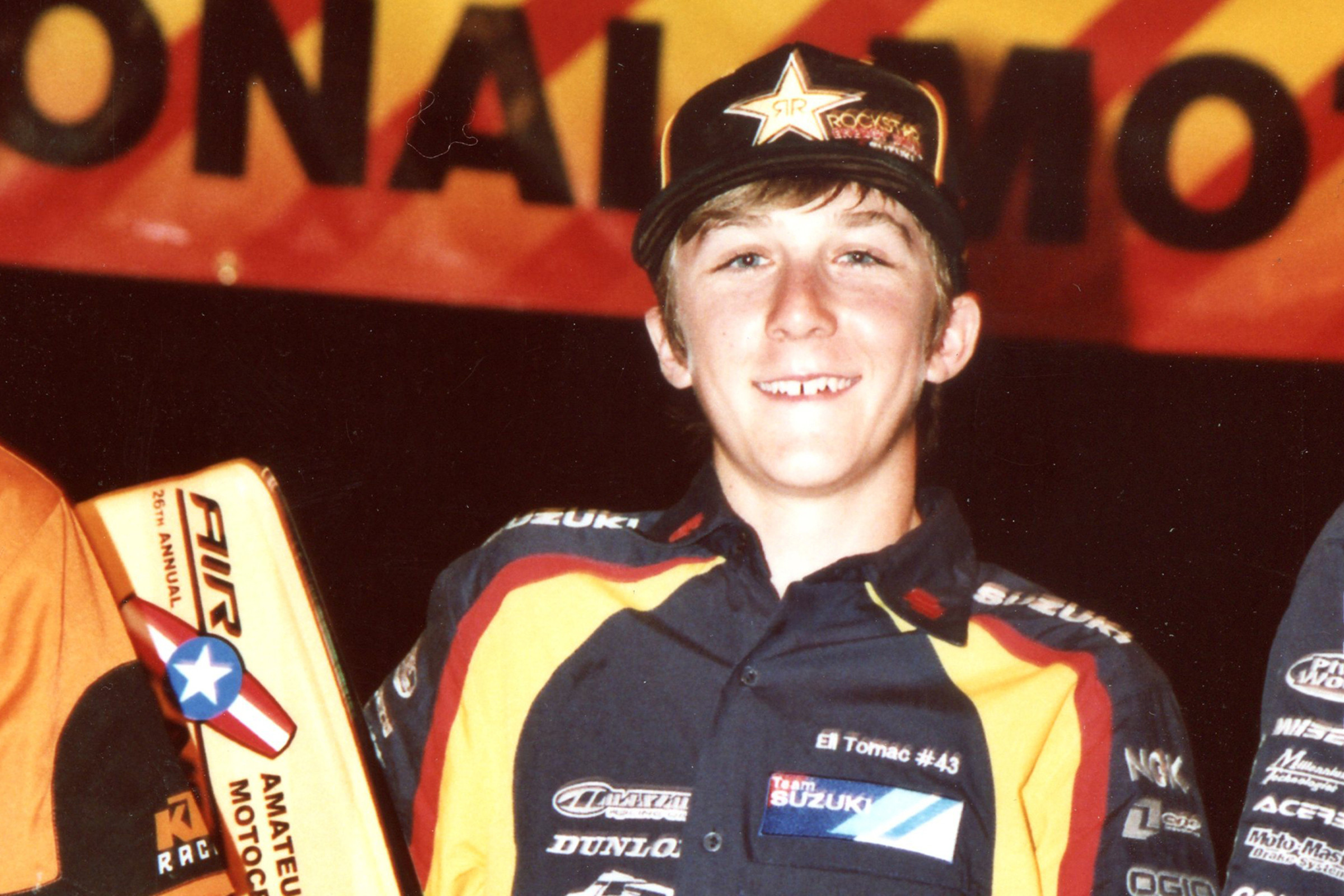 Eli Tomac is finally Monster Energy AMA Supercross Champion. He reflected back on some of his journey today, in a Zoom call hosted by Kawasaki. Eli first took questions from seven-time AMA Supercross Champion Jeremy McGrath, and then the media. Eli was asked about how he has dealt with different competition through the years. That’s when Eli realized that his competitors today aren’t much different than the ones he grew up with.

“Really, you somewhat race the same group all the way through your own career,” said Eli. “That’s pretty interesting. When you get into the 450 class you do get some guys who have been there for a while or some new guys, but really there’s a lot of the same guys you’re racing that you were also racing during your amateur career, like at Loretta’s. When you look back at it now, you’re like ‘No way. I’ve been racing this guy for 15 years.’”

This is 18 years ago and within the ranks are: Eli Tomac, Blake Baggett, Justin Barcia, Malcolm Stewart, and Jason Anderson. Think about that group right now in 2020!

Shoutout to Landon Currier for winning that class. He’s got some serious bragging rights saying he won a Loretta’s title over these guys. Baggett was second. Eli went 1-2-17 and ended up fourth, with a championship he could have won. He’d get other chances.

Eli’s father, John Tomac, an OG superstar of mountain biking, is famous for explaining how he didn’t let Eli ride too much in those days, making sure not to let him burn out at a young age. You eventually see Eli starting to break out, though. He won his first title in 2004 in the 65 (10-11) Stock class over “Spiderman” Shawn Rife, Barcia, and Baggett. In 2005, though, he was up to the 85cc ranks and Barcia found his stride. I remember the title coming down to the final moto and Barcia getting the better of Eli, going 3-1-1 to beat Tomac’s 2-2-2 in 85 (12-13) mod. Barcia also won the 85 (12-13) stock class, which really put him on the map of can’t-miss talents. Eli would often admit he needed to adapt to Loretta’s heat and humidity. He would get that figured out.

In ’06, Tomac notched his first 85cc championship by topping Anderson and Baggett. That’s 14 years ago on 85cc bikes and could easily be the podium finish at a random round of 450SX today! By then, Tomac had Loretta’s dialed, and he swept both of his classes for titles the final three years he raced at Loretta’s, in ’07, ’08 and ’09. His 2009 performances on a Factory Connection Honda are all-timers as far as lap times and dominance in 250 B Modified and Schoolboy 2. I remember Justin Bogle going 2-2-2 to Eli in Schoolboy and admitting the gaps to the lead were ridiculous.

Really though, it’s the Loretta’s title battles with Tomac, Barcia, Anderson, and Baggett that stick out the most. Consider how long those four have raced each other, then use that info when you see them battling today. Baggett beat Tomac at Thunder Valley in 2017 and then stated that his goal was to “break Tomac” and that he “didn’t have a famous father.” There’s a lot of history between these two. Think about the history when Barcia and Tomac are banging bars, or even yelling at each other like they did this year. Think about the history every time it looks like Anderson might get that elusive first-ever AMA National Motocross win, and then Tomac arrives to steal it again.

“I do have good memories,” said Tomac of Loretta’s. “I can still basically run through that whole track in my head. It’s kind of wild that way.”

Check out these clips of Tomac from 2007: