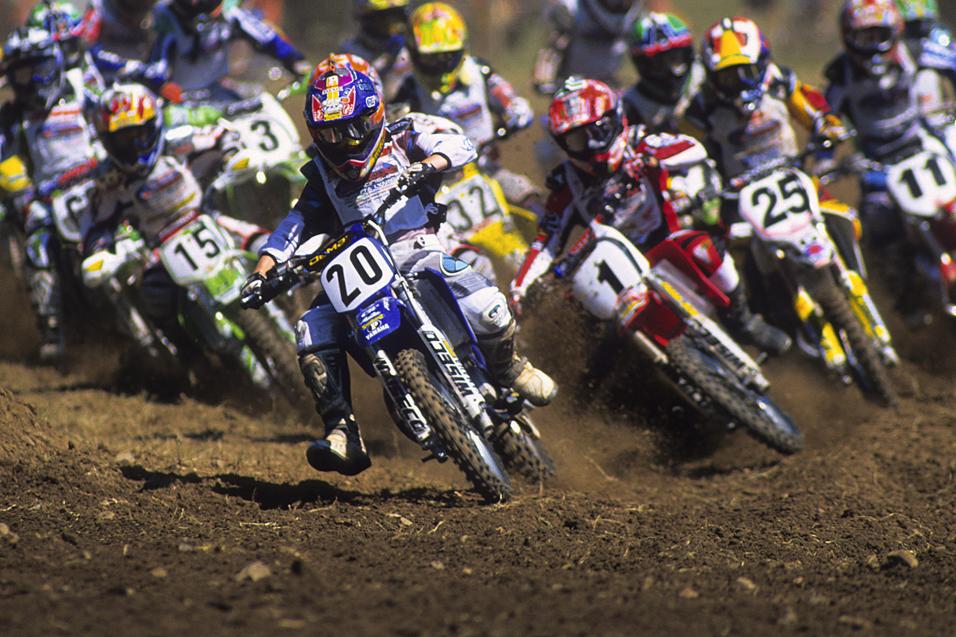 Welcome to our new feature as we count down one month to the 2020 Monster Energy AMA Amateur National Motocross Championship at Loretta Lynn's Ranch. We'll reminisce about great stuff through the years, and today we start with an early version of one of the most storied rivalries in the history of the event: Mike Alessi versus Ryan Villopoto.

This story was filed by Eric Johnson a decade ago. The racing took place a decade before that. EJ was on the scene the day the rivalry began. Here is his story.

“Man, there’s nothing better than watching two great 80cc riders go at it,” exclaimed Jimmy Button, standing in the infield of the Loretta Lynn’s motocross circuit – a circuit he had won many Minicycle championships upon for Team Honda in the 1980s.

“I know. Look at them. They go through lappers like professionals,” added Denny Stephenson, also a former Minicycle champion who had left Hurricane Mills, Tennessee with numerous trophies in the back of the family truck as a teenager in 1986 and 1988.

Welcome to the 21st Annual AMA Amateur National Motocross Championship and an enthralling duel between two 13 year-olds named Mike Alessi and Ryan Villopoto. Wringing the life out of their screaming Minicycles as the opening 85cc Modified (9-13) moto entered its closing stages, it was Team Honda factory Minicycle rider holding a small lead over the little known Yamaha privateer Villopoto.

Looking so much like scaled down versions of Carmichael and McGrath. The duo charged towards the moto’s 20 minute mark. Arguably the most exiting race of the week, the mothers, fathers, fans and industry types that surrounded the circuit watched on in awe as the white flag was thrown. With only a few corners remaining, Villopoto pulled right up on Alessi’ red rear fender, but just missed him at the finish line after attempting a full-on banzai charge around the rim of a high speed sweeper came up just short. And while Villopoto didn’t win the moto, he won the heart of the crowd with his extraordinary, go for broke performance.

“Who was that kid?” I asked photographer and close friend Chris Hultner.

“His name is Ryan Villopoto,” he replied. “He’s from Washington and really underrated. You should go talk to him today if you get a chance.”

An hour later, after scarring up an abandon golf cart, I set out for Area 3 – a far flung parcel of weed infested real estate way out in the hinterlands of the sprawling Loretta Lynn’s pit area. Driving along the crowded midway amongst a cacophony of idling motocross bikes, bicycles, golf carts, scooters, pickup trucks, box vans and a myriad of sweating, wandering human beings, I came upon Camp Honda. A huge “bunker” consisting of semi-trucks, box vans, motorhomes and tents, American Honda had truly circled the wagons at Loretta Lynn’s in 2002. In the middle of it all was the Alessi clan. Far and away the most high profile minicycle family in the nation, brothers Mike and Jeff (although both just still in their early teens) enjoyed the financial and technical backing and wherewithal of the mightiest motorcycle company on earth. Racing week in and week out, the California-based “Team Alessi” toured the nation all year collecting copious amounts of marble, metal, chrome – and publicity.

Then there was the Villopoto outfit. It took me nearly an hour, but I eventually found the family motorhome and Brothers Powersports trailer the family was operating out of. “He’s down in the creek fishing,” said a kid near the motorhome when I asked him if he had seen Ryan. “I’ll take you there.” Five minutes later, I had my shoes and socks off and was wading through the cool stream yelling out his name. Having no luck, I turned back. That’s when I ran into his father.

“He was really slow at first,” conceded Mr. Villopoto after we had spoken about his son for a few minutes. “He started off on a little 50 and he broke that in half. Then we got him a 60 and he was on that forever. It took him a long time to learn how to shift gears. But at that point we just did it on the weekends for fun. It took him a long time to get good at racing.

Like a number of families involved in American motocross, the Villopoto’s go back a few generations in the sport. Ryan’s grandfather raced a BSA in the late 1960s (when motocross first came to America), and his father raced Hodakas and Maicos all over California during the 1970s. However it is Ryan who was blessed with enough natural talent and speed to go all the way to the top. It was Ryan who had “the gift”.

“He’s special,” said Mr. Villopoto. “One day something just clicked. We started traveling and he started doing really well. We got a lot of seconds to [Mike] Alessi at Ponca, Loretta’s and Vegas and places like that. Then after Mammoth this year, Ryan knew he could run with him. That was really the icebreaker. In his head he knows he can beat Mike now. Then last week at Ponca City, he beat him.”

When asked if Mr. Villopoto and his son were put off by being so overshadowed by Team Alessi, he answered: “We’re used to it - just like we’re used to getting these pit areas way in the back at places like Loretta Lynn’s or Ponca City. It just makes us work harder. It’s tough to get attention and support where we come from. However in the last few years, we’ve begun to get attention and support from Brothers Powersports in Washington and from Mike Guerra at Yamaha. We’ve also just received offers to race for Kawasaki and Suzuki. We’re taking it seriously now because when you’re at this level, you have to take it serious.”

As we continued to talk about the amazing scene that was Loretta Lynn’s, young Ryan came walking down the creek. Dressed in green and black surf trunks, wearing sandals and carrying a fishing pole, his father waved him over to where we were standing. Ryan and I started to talk about his amazing moto and I said, “You were fantastic in your race with Alessi. He’s probably the best know 85cc racer in America now. How did it feel to be on the verge of beating him here today?”

“It’s great,” he smiled back shyly. “I know I can beat him now. That’s why I pushed so hard.

“Are you friends with one another?” I asked.

“We kind of were, but he doesn’t say anything to me now.”

Now it’s Friday, August 9, the penultimate day of the 2002 AMA Amateur National Motocross Championship. Yet again, an otherworldly hot and humid morning, the next round of the Alessi/Villopoto prize fight was scheduled for 8:30 a.m. in the form of the 85cc Stock (12-13) classification. In the staging area sitting on his #20 Yamaha, Ryan Villopoto leaned over onto the bike’s handlebars and waited for the Vet 35 Plus class to finish up its moto. Well off to his left, Mike Alessi, by himself, stood behind a wire fence and stared out at the starting gate.

“Okay! 85cc rider number one to the gate!” shouted out an AMA official over a microphone. Hearing the announcement, Tony Alessi, Mike’s father, a father who had dedicated a tremendous amount of time, money and vacation days to his son’s fledgling racing career, wheeled the finely-tuned CR80 to the second starting spot gate position, located immediately right of the doghouse. “85cc bike number two!” yelled the same AMA official. Mr. Villopoto and son carefully positioned the blue YZ behind the fourth gate to the left of the box.

As the fans gathered in the grandstands and along the fences to watch the two Minicycle aces, the tension and drama crackling in the air around the starting gate actually rivaled that of a 250cc Main Event at Edison International Field back home in Anaheim, California – and these two kids were 13 years-old! After the last Vet 35 Plus bike motored off the track, the call was given to the 85cc class to fire the bikes. After the sighting lap was complete, all 42 kids took to their places behind the gate and anxiously waited for it to clank into the soft Tennessee soil. 60 seconds later it did and the 85cc Stock Class collectively leaped out of the hole and screamed the starting straight and into the first turn.

Out in front was Alessi, with Villopoto fourth. It was on. Down the next long straight, the beehive slammed into a tight left handed hairpin turn then careened up the next straight toward a tight right hand turn. Alessi made it through the corner cleanly, but then two riders tangled and chaos ensued as a number of other riders hit the ground. After everyone got to their feet and all was sorted out, a moan went up from the crowd when it was announced that Ryan Villopoto was now dead last.

Undaunted, he immediately put his head down, banged his way through the YZ’s gearbox and set out looking for the tail end of the field. Lap after lap, Mike Alessi, way out front, looked over his shoulder to see where his adversary was. Way back in the 30s, Villopoto rode for all he was worth, picking off rider after rider. Utilizing every square inch of the track that was available to him in an effort to make up as much time and ground as possible, Villopoto found – and used – lines like a big-time, million dollar professional. Methodically, working his way through the madness and with the crowd now fully behind him, in the span of 20 minutes, Villopoto had managed to pass 38 riders. But time was out for the Yamaha rider as Villopoto was racing toward the third place rider when the checkered flag was unfurled and waved.

When he crossed the finish line, everyone in the surrounding grandstands stood and applauded Villopoto for his heroic effort. Removing his goggles, he idled beneath the technical tent, shut his bike off, and watched on as Alessi rode his Honda up onto the victory podium. Beneath the tent – sheltering the riders from the oppressive heat and humidity – a number of competitors and industry representatives congratulated Villopoto on his remarkable charge. He looked pleased. A moment later, Mr. Villopoto walked under the tent to see his son. Taking off his sunglasses, he said something sternly to Ryan, who upon hearing what he had to say, glared back with a look on his face equal parts shock and dismay. Mr. Villopoto then said something else, adamantly. Ryan, visibly upset and defending his gritty, determined performance, shot back at his father with a few words. The father listened, shook his head, put his sunglasses back on, and walked away. Ryan grabbed for a cup of Gatorade, took a long drink, and looked down at the ground. He didn’t look up for a while.