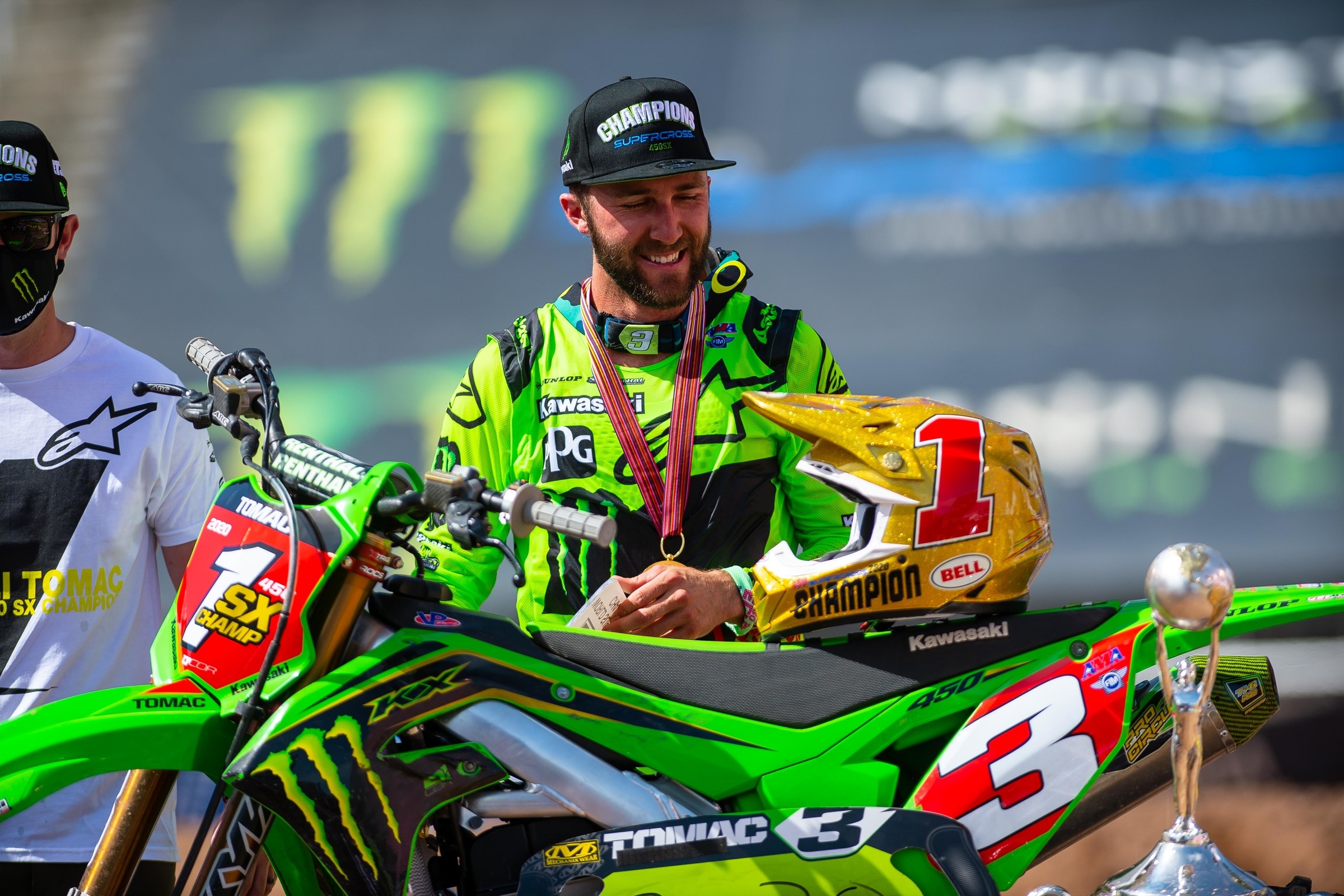 It wasn’t without a valid defense. Cooper Webb, the 2019 Monster Energy AMA Supercross Champ, put together a strong close to the 2020 season, scoring the most points of anyone during the Salt Lake City 7, vaulting from third in points to second, and keeping his title hopes alive until the final round. It wasn’t enough, though, because this year Webb got off to a slow start, and then a bad race at mid-season put him in a huge points hole. That’s the kind of thing that usually snags Eli Tomac.

Not this time. Tomac was strong in all conditions and scenarios. He didn’t win the title because Webb had problems, he won it because he was the best rider this season.

Tomac’s 2020 title drive seems surprising only because he hasn’t done it before. Everyone knew Tomac was capable, which is why all of his previous missteps led to so much conjecture. It just never made sense that Tomac could be the best supercross racer in the world for a dozen races a year, but regress below average at the other five. There was a chance, one of these years, that Tomac would get it right, and no one would be able to stop him. This year was that year.

Take out the season opener and the finale (where he finished seventh and fifth, respectively) and Tomac finished no worse than fourth from rounds two through 16. That kind of consistency has eluded Tomac in supercross previously.

“I really thought I was getting to maybe be running out of time,” said Tomac. “I don’t know. When you just look at the past… The past is past, so you don’t want to base everything off that, but I’m 27 and there’s some people that doubt you that way, especially when you look at my past series. I have blown it a few times. So being able to fix that inconsistency, it was a huge relief that way.”

This championship is obviously a massive boost for Tomac’s career and legacy, and with his recent announcement that he wants to race at least through next year, there could be much more to come. But this one was significant for a second reason: it ends two huge win streaks.

There’s an even longer streak. Dungey, Anderson, and Webb were all trained by Aldon Baker during their title runs. The previous four titles were won by Ryan Villopoto, who also worked with Baker. That gave Baker-trained riders a nine-year title streak!

“Yeah. When you look at those guys, that whole program there, they’ve won it so many times in the years past,” said Tomac. “Really it’s preparation and being ready from the get-go round one. You’ve got to be ready from the get-go. Yeah, you can make up throughout the season, but that was the difference this year, too. We were ready from round one. I didn’t really have to dink around much, finding comfort with the bike and getting through those 20 minutes. By round two I was back to my old self, I felt like. We were just firing, ready to go.”

You can do some even fuzzier math and make Baker’s run even more historic. Back when Baker worked with one client only (Ricky Carmichael or James Stewart) they won the title every year they raced the full supercross season (’01, ’02, ’03, ’05, ’06, ’09) with only injuries (Carmichael ’04, Stewart ’08 and ‘10) and Carmichael’s part-season retirement (’07) as blemishes on the record.

No such injury reasons this year. Webb made every race, and while he did suffer that big crash in Arlington, he was already at a points deficit to Tomac by then, anyway. Tomac just won the whole thing this year, straight-up.

“I never felt like I had been at a disadvantage that way for my program,” said Tomac. “It was just those inconsistent races where I’d just blow those points. Got rid of that.”

For certain, no one was ever doubting the training program Eli and his father, Mountain Bike Hall of Famer John Tomac, have put together. And while the Austrian-based brands on the orange and white bikes have taken the last few crowns, Tomac’s Monster Energy Kawasaki team is always a powerhouse, including that four-title run from Villopoto. It was Villopoto’s success that caught Eli’s eye, as he told us way back in late 2015, when he joined the Kawasaki outfit. It took longer than expected to finally come together, but now the title has come back to a familiar place.

Although it just left one, also.