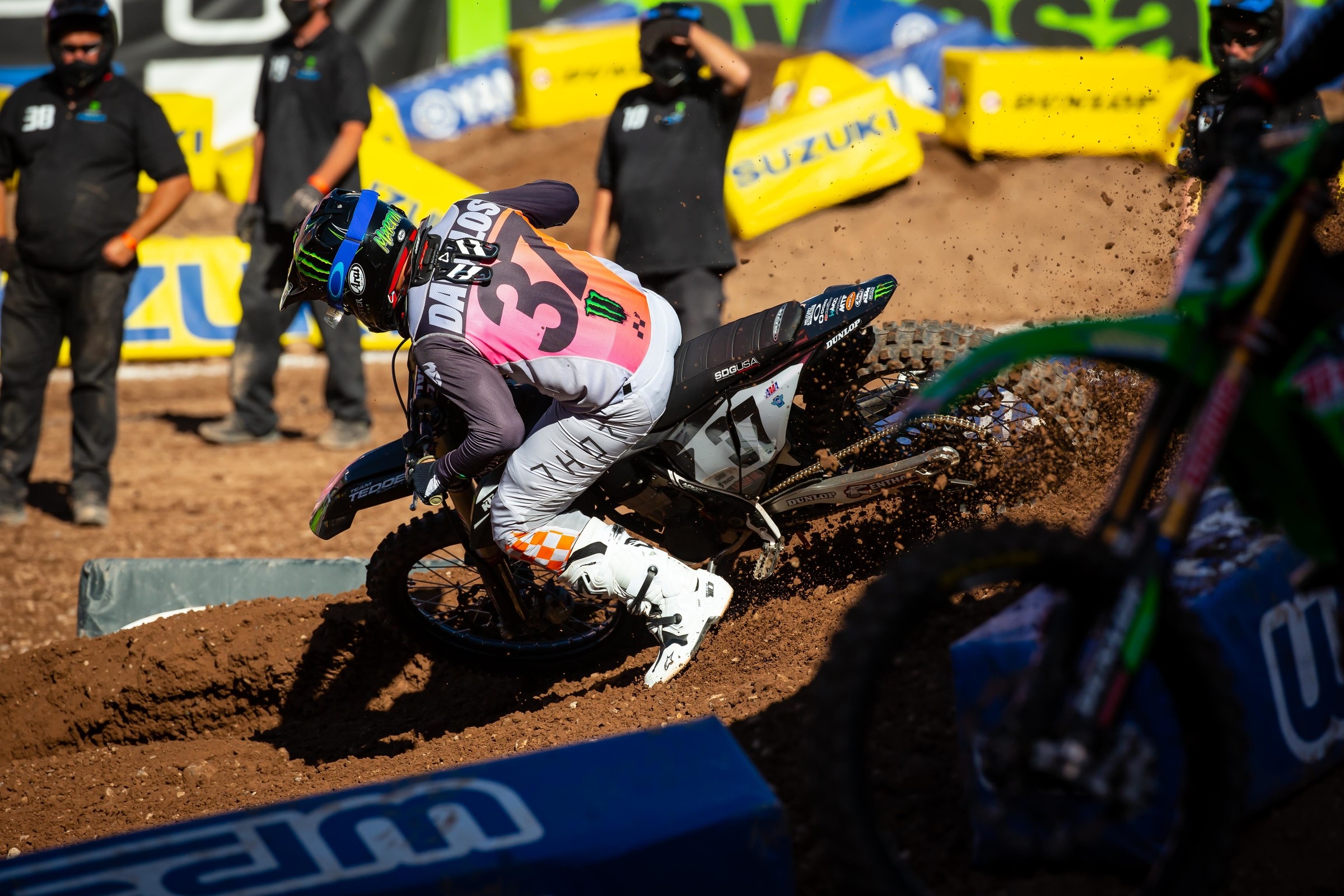 At 33 years old and after spending nearly 14 years in the classification and a few minutes after winning the 2019 250SX East Region main event in Nashville, Tennessee, last April, all veteran rider Martin Davalos could point to was the fact that he wanted to graduate to the premier 450SX class for the 2020 Monster Energy AMA Supercross Championship.

“I just want a 450 ride, man,” exclaimed the native of Ecuador who has spent virtually his entire career racing in the United States. “I’ve been in this class a long time and I just want a shot. I know what I’m capable of doing on that bike, outdoors on a 450 was good for me on the Husky in 2017. I believe in myself, I know I can do it.”

It came at the eleventh hour early last December, but Davalos, a five-time 250SX main event winner during his career, was hired on to race a KTM 450 SX-F for Team Tedder/Monster Energy/Lucas Oil/KTM Racing. Thus far, and despite the chaos and uncertainty the Pandemic has cast upon this year’s stadium tour, Davalos and the entire Team Tedder outfit have had plenty to be both pleased and optimistic about. A fighting ninth place overall in the one season he did compete upon a 450 full-time—Davalos placed ninth overall in the 450 Class of the 2017 Lucas Oil AMA Pro Motocross Championship—Davalos hit the ground running at Angel Stadium earlier this year for the 2020 season opener, his results and consistency strong all along the way. Which brings us to the outskirts of Salt Lake City, Utah, on Wednesday where Davalos was hoping and planning on motoring away with yet another top-10 main event finish. We rang him up before the race to get his take on the Salt Lake City experience. Later that night, he delivered another solid ride, taking sixth. The improvement continues.

Racer X: Martin, first and foremost, how are you and how have you been?
Martin Davalos: Well, obviously, we all went into quarantine and weren’t able to do much, so I took advantage of it all and took some time to enjoy my new son Leo, who just turned nine months old yesterday. That’s something I didn’t get to do much of when he was born because he was born and the racing season started. I sort of wanted to get the season done and to get my summer going, but at the end of the day, it is what it is. We just kind of made the best out of it and took a little break and enjoyed my son as much as I could. I’m having so much fun with him.

Okay, so as of the resumption of the Monster Energy Supercross Championship, you’ve been holding station in the Salt Lake City vicinity, correct?
Yes, basically, and luckily enough, Dakota and Matt Tedder arranged us a really, really nice Airbnb and we’ve been able to stay in Park City, which is really beautiful. My wife couldn’t come here with me with my son, so I basically came solo and I’m trying to do as much as I can. My wife works full-time, and we’ve just kind of been getting it done. And like you’ve probably been told, we’re quarantined here for the time, so we can’t leave. I’m surrounded by good people here and we’re taking advantage of beautiful Utah is and how nice everything is and I’m continuing my training just as if I were at home. That’s all been keeping me kind of humbled and entertained a little bit.

You guys have run three consecutive races at Salt Lake’s Rice-Eccles Stadium. What do you make of it all thus far?
It’s what we have to do. I honestly don’t mind this format because we’re just kind of getting it done. For me, it’s very important on trying to be as fresh as possible for the race. I’m 34 years old, I’m not 15 or 20 years old like other people that I’m racing. For me, the race day is the most important thing. I’m trying to get as much possible out race day that I can. I’m also focusing on recovery. As you know, the altitude here is a huge problem. I was born in Ecuador and I kind of know what my body is going to feel like and what I need to do, so I’ve been focusing a lot on that so that I can be as fresh as possible for race day.

As of the late December of 2019 you were without a ride for 2020. Then, during the first week of that month, word dropped that the Tedder/Monster Energy/Lucas Oil/KTM Racing signed you to a race a KTM 450 SX-F in the 2020 Monster Energy Supercross Championship. It was as if the stars lined up.
As you said Eric, there were no rides. I mean it’s just incredible what everybody has to go through. You know, I’ve known Dakota for a long time. I trained with him at Pro Circuit, as we both shared Ty Kady, who was our trainer. I knew Dakota’s family very well and they’ve been so good to me and are great people. I’ve been very blessed to end up where I am right now. We have a great program. The relationship that Matt Tedder has with factory KTM and the amount of parts that we’re able to get from them is excellent. What I like the most about it all, though, is that I’m really able to focus on and set the bike up the way I want it. I have that freedom. Anything that I need from KTM, they have been good to me and so has WP with the testing. Honestly, at the beginning of the season I was riding Kawasaki and went to [the] Geneva [Supercross] and raced. We didn’t have a lot of time on the bike and I didn’t do much testing because I wanted to get comfortable with it. Honestly, the more I ride the KTM, the better I am. I think more time on the bike is helping me right now. it’s only going to get better. If I decide to race next year and continue my partnership with the Tedders, it’s only going to become a better thing for me. I’m going to be more familiar with the team, the bike and I’ll have more time to test and I think that’s all going to be very important.

I’ve read up on the #37 KTM 450 SX-F you’re racing and it’s very noticeable that KTM and KTM North America have had a heavy hand in creating it. I mean the bike has essentially the same race motor as the Red Bull KTM Factory Racing bikes. Good equipment for you and Team Tedder?
Yeah, it’s a very good bike, man. I’m super-pumped with what we have going on and the amount of parts that we’re able to get. Everything has been good. During practice, the bikes are great. That was one of my biggest concerns, you know: I wanted to be comfortable in a team where I was able to set up the bike the way I wanted to and focus on my riding. They’re family owners and they really understand giving me the freedom to do what I wanted to do. They respect that I have a family and I’m able to train at home. Yeah, it’s just been great, man. I’m super, super happy where I am right now and I think that’s another huge part of how my year is going. I think it's all about just having a good program and being happy with what you’re doing.

And the results have been coming! I mean going back to Atlanta, you’ve gone 5-14-6-11-8 in the last five main events and as of tonight’s race, you are now slotted-in at 13th in 450SX points. That’s encouraging.
Yeah, and I feel like I have a little more in me. I feel like at the beginning of the year I was kind of riding the bike like a 250F. I’ve had experience on the 450, but it takes a lot of riding and racing to really get what you want. I’m learning and I think I’m getting better and my fitness is getting a lot better. You know, I’m just happy to race. I have a really good team behind me. Matt, Christine, and Dakota have done nothing but help me. They’re here for me and want to help me succeed. To be able to have that behind you is obviously a great thing, you know?

Okay, Martin, what’s the masterplan for the rest of the summer, and for the rest of the year, for that matter?
When I first talked with Matt, we just decided to do supercross and to see where it went. I think I wanted to just take my time with supercross. We didn’t really think much about outdoors. He’s mentioned that I could do a few rounds if I wanted to, but this year has been very awkward already and it sounds like the outdoor races might be limited now. I think this is a good year for me to focus just on my supercross season and go into the summer and just stay on the bike and get some more base fitness going on and talk to Matt and see what options we have for next year and maybe just give it my all next year, you know? I think I’m riding the only Monster Energy KTM in the world. That’s pretty cool. I’m excited, you know? I’m excited to finish of these rounds and to try and get in the top 10 and just really prove myself.