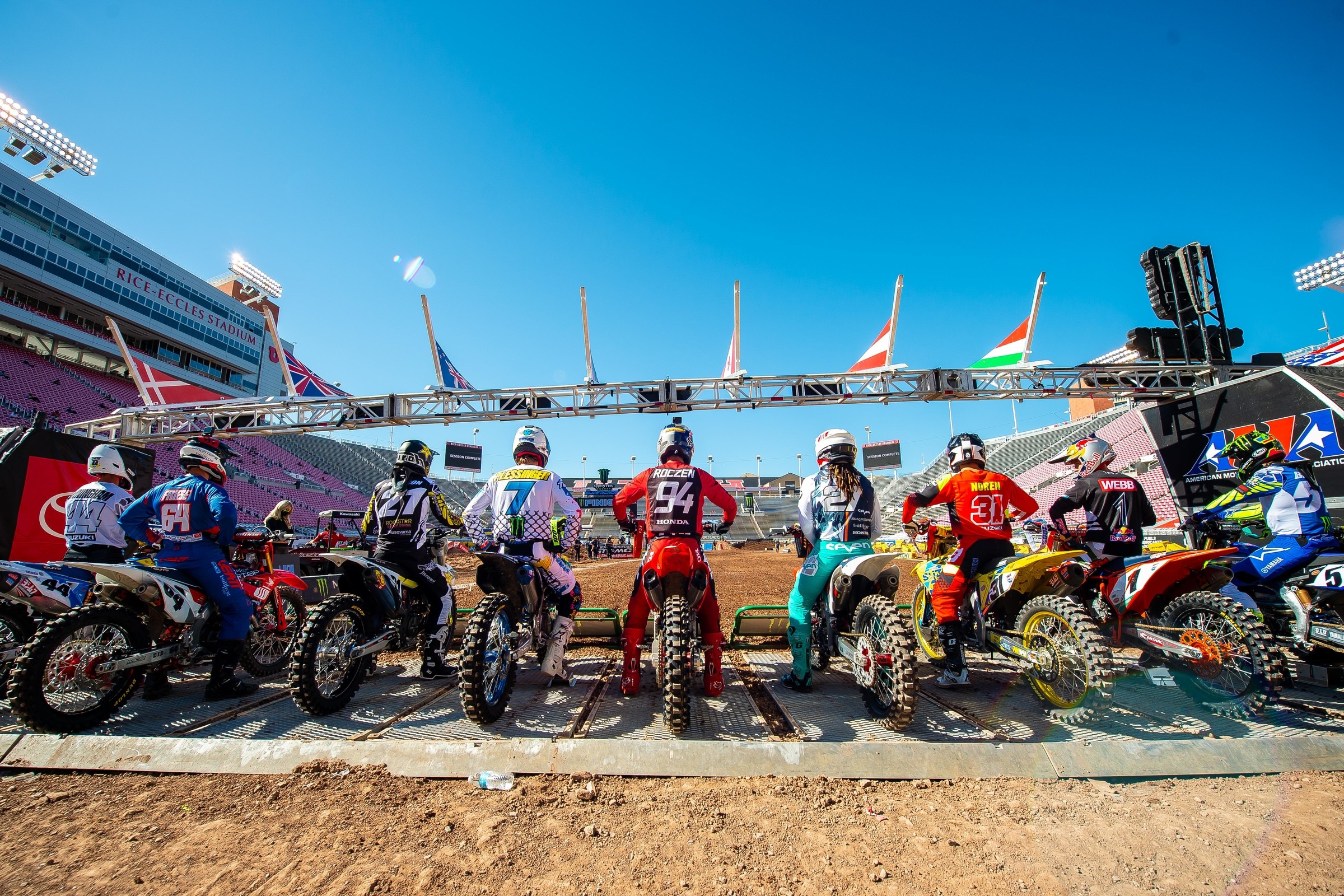 Now that supercross is back, these races won’t stop! Come to think of it, what day is it now? Never mind, that’s not important. What is important are the burning questions we have for former pro Jason Thomas! He’s in Utah coming these rapid fire races so we hit him up for questions from yesterday’s action.

Jeez the frustration for Ken Roczen, faster in the whoops than Cooper Webb lap after lap in not only the heat race but the main event, but Webb kept taking the line away in the corner. How does that impact a rider mentally and emotionally when you complete 90 percent of a pass over and over?

After a couple of laps, I don’t think it’s really that frustrating. Just as Webb knew he was going to block there, Roczen knew he was going to be blocked. In that scenario, Roczen would be hoping for a bobble from Webb in those whoops which could have opened up enough of a window. They are both gauging each other down the whoops and their speed entering the corner. It’s a highly orchestrated game of chess. They each knew what their adversary’s strategy would be after a few laps. Webb is a master of anticipating his opponent’s move and almost impossible to pass if you give him 10 laps of the same move.

Webb actually admitted in the press conference he had tried to mess with Eli Tomac mentally, and he couldn't crack him. I seriously just want your take on this, and what you've heard.

I don’t blame him! From the outside, it looks like Tomac has been susceptible in prior years to mental games. He has looked vulnerable in high pressure spots. For Webb, he has nothing to lose. He is highly incentivized to get into Tomac’s head and force a mistake or meltdown. It seems like that’s the only way this championship isn’t heading home with Tomac. Webb has pressured him on and off the track, even to the point of yelling at both he and Roczen while waiting on the starting gates. It might seem futile or even unorthodox but I can appreciate the willingness to exhaust all avenues.

Say what you want about Webb but he is not scared of confrontation. He seems to take situations like this head on.

Watch the press conference below, at around the 24:28 mark to hear Webb’s mentality on the starting line.

Where are we at with the Salt Lake dirt? What a roller coaster during these four races.

It’s been all over the map but so has the weather. The dirt is fairly average overall but 98 degree heat with 25 MPH winds followed by 49 degree rainy days aren’t really helping to create consistency. The dirt Wednesday started a bit wet and rutty but slowly turned hard and slippery by the main event. With sun forecasted until Sunday, look for a harder surface for round 15. It will be a bit slippery, closer to round 11 than the last three rounds.

We've seen some guys step up at these races, and other guys have struggled. Have we reached "They are what they are" status after four races or is there room for change?

I believe we have found some predictable patterns. Remember, these 450SX guys had 85 days in between races. That’s a lot of time to improve or lose ground on your fellow racer. It’s fairly obvious who put the work in over that time and who didn’t. Look at the average finish over the first 10 rounds and then the average finish for these four and it paints a clear picture of progression or regression. Racing so often doesn’t give an opportunity to turn the tide so we will see more of the same.

Tomac has been playing the safety route with the inside gates, but it didn't work out this time. It has bailed him out a few other times though—turning bad starts into decent position by just rolling the inside of turn one. Talk a little about this strategy.

It’s definitely the safest strategy to avoid catastrophe. The inside gates give you a chance to get a great start with a great jump but if you don’t get that jump, you aren’t vulnerable to a bevy of over-cooked riders to your inside. You can control your own destiny a bit more, lowering the risk of disaster.

Starting in the middle is the most likely place to result in a top five start but it’s also a very good place to get caught in a first turn crash. For Tomac, a big pile up is something he wants to avoid at all costs. I think he is prioritizing safety over the best chance of a good start. If he had to win races, I think you would see him shift his gate position more to the middle and with it, shift his risk factor up a tad. Mitigating risk is a huge necessitation as the rounds wind down.

Is Austin Forkner's win a sign of change in 250SX West or nah?

I don’t believe so but he did appear to have improved a bit. Leaving San Diego 123 days ago, Ferrandis appeared to be the clear-cut best. He still might be but the significant edge he held over Forkner didn’t seem as pronounced. Also important, Forkner looks to have taken a step past Justin Cooper, too. I still believe the showdown is going to be a wild affair with huge points swings on each coast.

Bro. Just talk about the practices and heat races and the overall 250SX West vibe. Stuff got crazy!

IT IS SO MUCH MORE ENTERTAINING THAN THE 250SX EAST. Of course the injuries are the biggest factor here but after watching three straight 250SX East races, there is simply no comparison to the West. The top two East riders are elite (maybe add Colt Nichols too) but the level drops off significantly afterwards. I would not be shocked to see seven of the top ten showdown riders be from the West.

I was a huge fantasy loser. My team was a disappointment and folk songs will be written about how poorly they performed.

In the 250 class, Jett and Hunter Lawrence certainly had a few punching their keyboards in frustration. They have huge upside but both found themselves on the ground and working up from the back. Christian Craig and Cameron Mcadoo, on the other hand, really stepped up and rewarded their team owners. Most teams included those two, though, so it wasn’t a huge coup. Watch for a bit more variation in round 15 as teams will have to venture off the main path we saw on Wednesday.

In the 450s, Blake Baggett and Zach Osborne both delivered (I had neither). Martin Davalos was another big point scorer, while Justin Barcia, Malcolm Stewart, and Justin Brayton all disappointed as all-star picks.

Those that gambled with Fredrik Noren, Kyle Cunningham, or Adam Enticknap, were all left with nothing but frustration. Luck is a big factor for these fringe 450 picks and as always, fantasy’s biggest variable is luck.