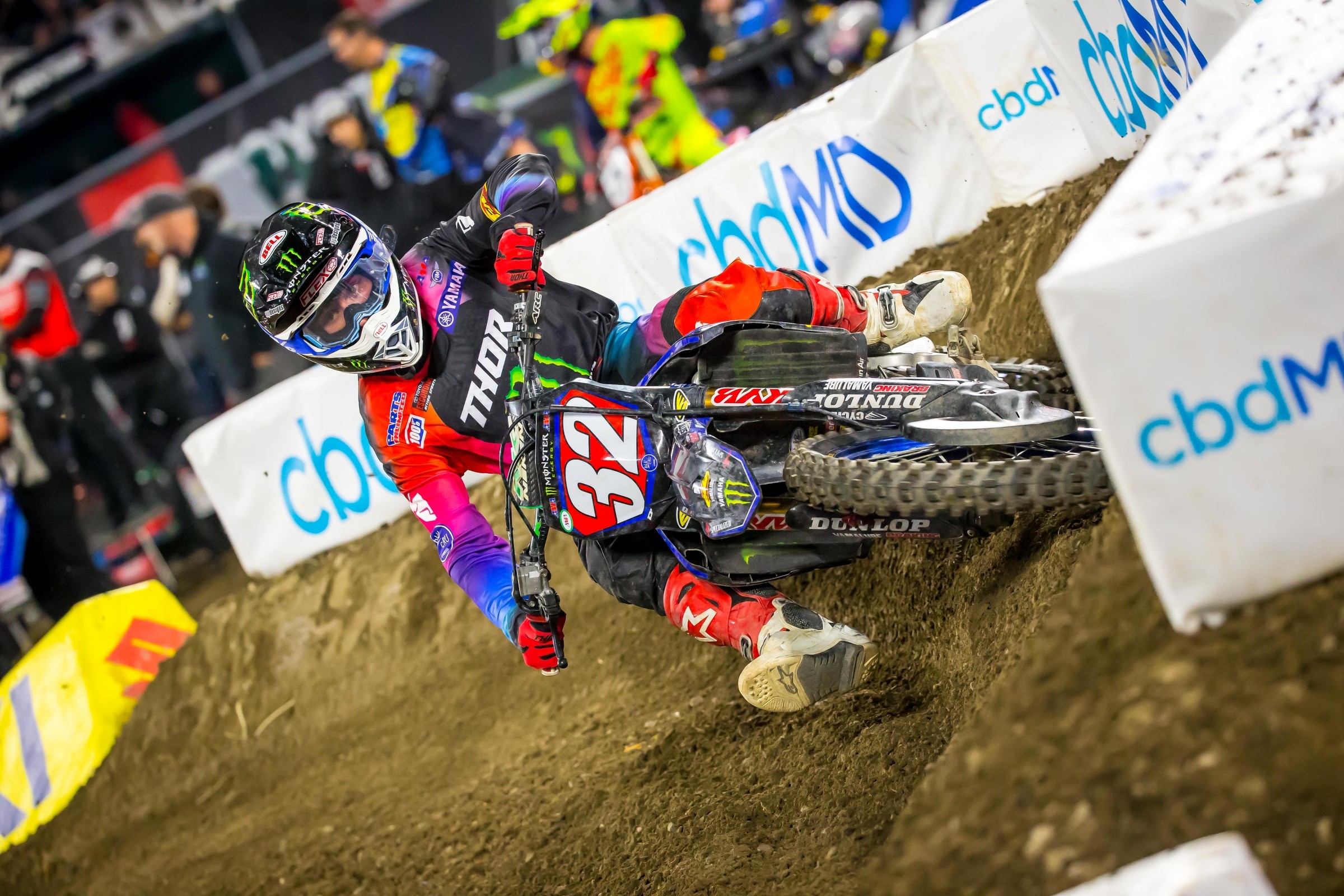 While you always expect Eli Tomac to be a threat to win on any given night, you’re never quite sure what you’re going to get. For example, Tomac battled arm pump at the opener and ended up seventh, but last week at A2 he looked like a completely different rider and ran away with the win! One thing we do know is, when the mercurial Tomac heats up and catches fire he can be extremely difficult to extinguish. We’ll see if he keeps it rolling in Glendale. –Aaron Hansel

If you’re looking for a good pick to round out your fantasy team consider Ryan Breece. The HEP Motorsports Suzuki rider, who’d been competing in Germany on a Yamaha during the off-season, was a last-minute fill-in rider for the injured Max Anstie. As a result, he only had a few days on the Suzuki before A1. He skipped St. Louis to wrap up the German SX title (once again on the Yamaha), then flew back to America and proceeded to qualify for the 450SX main event on a Suzuki. With the German series out of the way Breece is now free to focus on dialing in his Suzuki and is only going to get stronger from here on out. –Hansel

You could easily argue that being consistently good in racing is better than outright speed, especially in an abbreviated 250SX season. Luckily for Justin Cooper he’s had both so far this season, and although he hasn’t been in the winner’s circle since taking the checkers at A1, he’s still managed to grow his points leads at every single race thanks to strong runner-up rides. Following A1 he was up by three points, five points after St. Louis, and after A2 his lead is now twelve points over Dylan Ferrandis in second. Can he grow his lead even more this weekend? –Hansel

Things didn’t go as planned for Austin Forkner last week at A2. The Monster Energy/Pro Circuit Kawasaki rider went down hard in the whoops, ended up 17th, and is now 22 points out of the lead with only seven races left in the 2020 250SX West Region Championship. His season definitely isn’t over, but making back those points isn’t going to be easy, especially when the defending champ is in the class. If Forkner wants to win this title he needs to be dominant for the rest of the season. –Hansel

You might not remember everything from last week’s action, but we’re willing to bet the incident between Ferrandis and Christian Craig isn’t something you forgot. And how could you? Ferrandis punted Craig so hard it looked like a bomb went off under Craig’s Honda, sending both bike and rider flying. Craig was already facing a big points deficit due to a crash in St. Louis, but Ferrandis’ move at A2 (which resulted in a DNF for Craig) completely killed any chance Craig had of mustering a comeback in the points. Drawing the ire of the competition isn’t a great move if you’re trying to win a title, and you’ve got to wonder what might happen if Ferrandis and Craig find each other on the track this weekend. –Hansel

Triple Crown racing is back for 2020, now debuting at round four at Glendale. In the past two seasons, Anaheim 2 (round three) hosted a Triple Crown race. Expect lots of chaos and unpredictable results, with three starts featuring all of the top riders from each class. Outside of Austin Forkner last year in Detroit, no one rider has nailed three great starts and three wins in one night. The overall win at these events often comes down to one subtle move throughout the night, and it will have a big impact on the results and even the series’ points. For fans, just remember one thing: don’t turn your TV on late. The racing counts for everything from the very first gate drop of the night. – Jason Weigandt

Blake Baggett has been more effective this year than the results show. He was a strong fourth at Anaheim 1, a race where he usually struggles. He was fast at St. Louis but blew the start, and everyone was fast up front. Then came a magical moment at Anaheim 2, when he caught race leader Ken Roczen. It looked like Baggett was about to go for the lead, until his crashed, sending him all the way to the back of the field. He finished 14th. Last year at Glendale, Baggett scored his first (and only) career 450SX win. He appears just as fast in 2020 as he was in 2019. Can he do it again? – Weigandt

Anaheim 2 was completely and totally decided in the whoops. The first section was super fast, the second was super tough. They also changed a bunch as the night went on. As the whoops got edgy and turned into a V, it led to mistakes, such as the crash that cost Forkner huge points in 250SX West, as Hansel mentioned above. Cooper Webb was able to turn to his jumping technique in 450SX, and it paid off in the second half of the race. It might be different this weekend. Glendale’s hard dirt can get edgy, but the whoops usually don’t break down enough for jumping to really work. Riders like Forkner and Webb will likely have to commit to blitzing all night, and riders who love to blitz could have their day. Will be fun to see how this changes the dynamic of the racing. – Weigandt

Pin it to win it.

Supercross’ move from the Arizona Diamondbacks baseball stadium in downtown Phoenix to the Arizona Cardinals’ stadium in Glendale has completely changed the racing at this event. State Farm Stadium boasts floor space bigger than the typical football field, because one whole end of the building is open (this is actually done because the entire grass football field slides out of the building so the grass can grow out in the sunlight. Yes we're serious). The extra floor space leads to an extra-long start and long rhythm lanes, and the riders love it. Long lanes provide more time to draw up next to a rider and then make a pass in the next turn. The result? We’ve seen great tracks and great racing. The 2017 track, I think, might have been one of the best supercross layouts ever. Last year’s battle with Baggett, Jason Anderson, Ken Roczen, and more was spectacular. Will we get more of that this weekend? – Weigandt

The transition into the 450 class is always tough, and a few riders are learning that right now. Aaron Plessinger got a real test when he good start in last week’s main event. It didn’t go well.

“Yeah, tonight was tough. I got off to a really good start in the Main and kind of froze up,” said Plessinger in a Yamaha team statement.

Much has been made of Monster Energy Yamaha’s Justin Barcia improving his machine and his results early this year (although A2 was not as good, with ninth, which cost Barcia the points lead), but we haven’t heard as much from Plessinger. Is a breakthrough going to come at some point? – Weigandt

This look never gets old. I m just beyond thankful to be in this position. ?? life is good!

Speaking of Plessinger, there are more lessons for more riders new to the 450 class. Adam Cianciarulo, a rookie, was sixth at A2, which was good but not nearly as good as his A1 race, where he nearly won.

“Always on these 450s… Growing up, to me, I always thought you get a setting and you’re good,” said Cianciarulo. “You would think that’s how it works, but you always have to evolve and change. Just got to make sure you’re going the right way. For whatever reason I just did not gel with some of the changes that we made and some of the things I was doing as well.”

Second-year 450 man Zach Osborne was fourth. Not bad, but he’s still trying to figure the class out, also.

“I was nervous. I’m not going to lie. We threw the kitchen sink at the bike before the main,” said Osborne. “Obviously we’ve been riding in Florida all winter and the dirt is really good. This dirt is maybe medium or less than medium. I’ve been struggling for feel.”

Cianciarulo and Osborne have all the tools for podiums and race wins. When will they put all the pieces in place to make it happen? – Weigandt