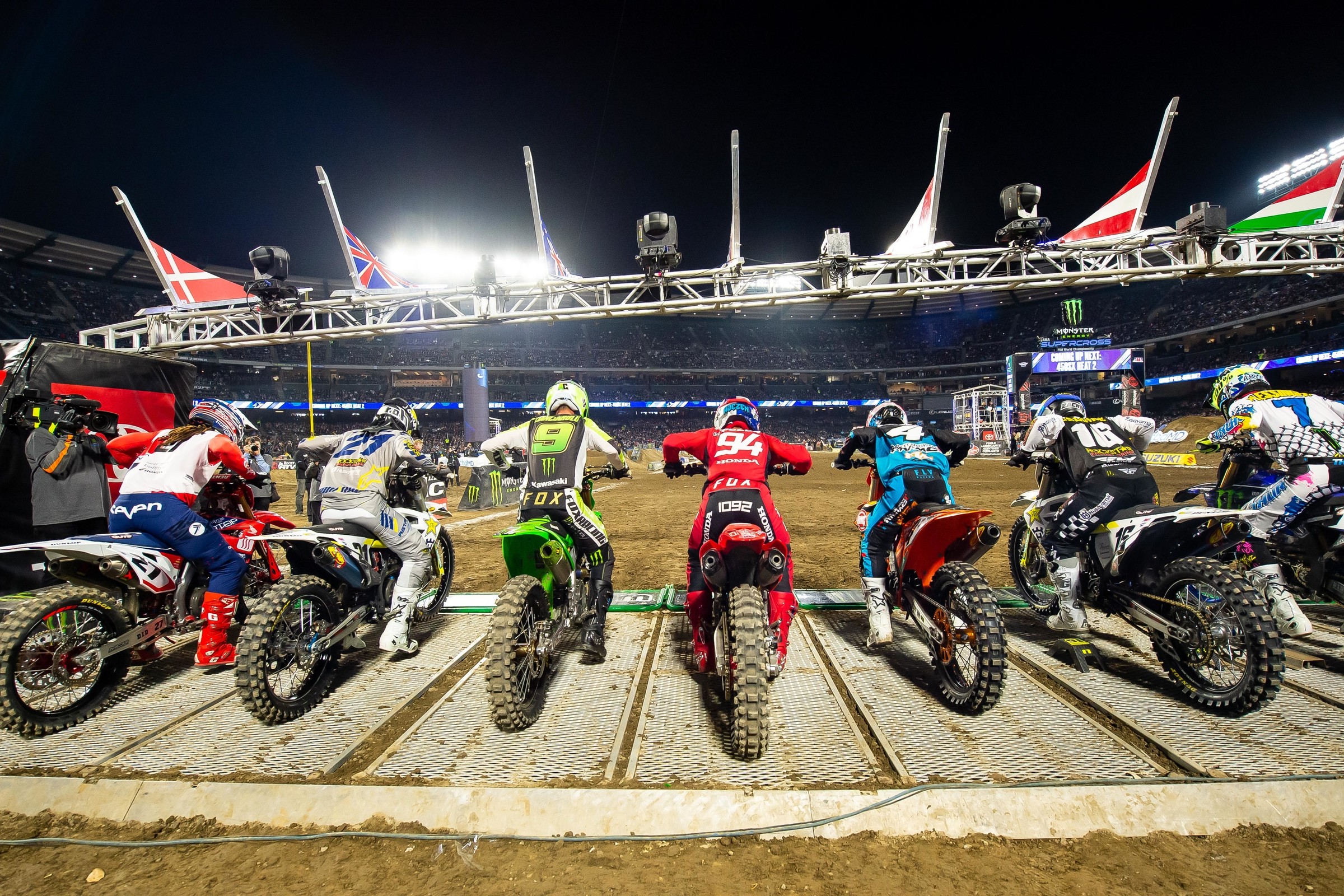 It’s Triple Crown time! Welcome to Staging Area, by the way. As we head to Glendale, the series is certainly heating up. The 250SX class was drama filled with Dylan Ferrandis firmly securing the role of villain moving forward. The 450SX class once again took a turn with Eli Tomac finally showing the speed we know he possesses. The red plate changed hands with Ken Roczen following up his St. Louis win with another podium finish. Another wrinkle would come in the form of A1’s big winners, Justin Barcia and Adam Cianciarulo, both struggling in the same stadium they dominated just 14 days before. It’s been a week-to-week series thus far with any early conclusions being proven foolish. Now we return to the location of Blake Baggett’s only career 450SX win, scored just last year. It’s anyone’s guess as to what Saturday will bring and that’s just how I like it.

The track in Glendale is usually pretty decent. The dome ensures a great environment for racing and a larger than average floor space gives track builders room to get creative. The start this week is loooong… As in the longest of the season long. This stadium has some extra room at the end beyond the regular football-field length, and the start stretch takes full advantage. Riders will race all the way to the other end before veering into a long 180-degree left. It’s going to be a fast entry into that turn and hopefully riders can find separation, avoiding a catastrophic bar entanglement. The first corner is nice and wide, though, enabling riders to maneuver. I know the first thing that pops into mind when you see a really long start is that the high speeds could make it dangerous, but in my experience, it all equals out. By the end of a long start, the riders are usually fairly well separated, which reduces the risk of tangles and pileups. We’ve seen plenty of carnage on short starts, of course.

The first rhythm section will be interesting to watch. We don’t often see a section with 11 jumps so the choices could vary widely depending on the angles and build. The first jump looks very steep and could determine the options for the rest of that section. If riders can only double, I think it will become a 2-2-3-3-1 section. I am betting on the 2-2-3-3-1 but don’t be surprised if someone goes for the quad into the berm to end the section.

After the bowl berm, another rhythm section awaits but this one is more traditional. There are two basic options: double-triple or triple-double out of the corner followed by the standard supercross triple. That choice will probably depend on how steep the first jump out of the berm is. If it’s steep, riders will be forced to hit it slower and double. If it’s laid down a bit, riders will carry big speed through the corner and seat bounce triple.

The next berm slingshots riders into the only set of whoops. Glendale’s whoops can get nasty and are usually blitz heavy. That could spell trouble for riders like Cooper Webb and Zach Osborne, who have a tendency to opt for jumping when possible. Last year, the advantage that Blake Baggett and Malcolm Stewart (before the crash) had in the whoops was sizable. Watch for the whoops to be a big factor if they are built aggressively. Further, watch for qualifying times to be heavily influenced by this as they won’t be rolled in yet (always smaller for the night show).

Another bowl berm fires riders down the start straight diagonally and headed toward the finish line section. An easy double over the finish leads to a unique double that will force riders to turn immediately upon landing. Watch for riders to land on the left side of the finish line double in order to “open up” the corner. Turning in the air a bit will allow them to accelerate hard when landing and crossing the start straight again. Jumping straight will force a turn after landing, giving up valuable time.

The double into the sand will be pretty one-lined I think. I am not a big fan of sand corners as they usually favor the inside heavily and everyone just gets blasted by sand roost. Maybe a fast outside line will develop but it’s always tough to make a pass around the outside in a short section.

Riders will cross the start straight yet again, flying into a 180-degree left and rocket back across again into a 180-degree right. These sections are basic but add to the lap time and can present block pass opportunities. After crossing the start straight AGAIN, the longest rhythm section of the track awaits. Riders will jump in at an angle which should be interesting to watch them dissect. My best guess will be 2-2-step on-step on-off, then triple-single into the corner. Being completely transparent, this section is a big guess because it’s so unique. The way these single jumps are built, as well as the tabletops, will have a huge impact on the possibilities. Riders will spend several minutes looking at this section Saturday morning.

The last section is a combination of three jumps that leads back into the first turn. Tripling out of the turn is possible but I think riders will choose to stay inside and double-single, protecting the inside line before the first jump.

Anaheim 2 was brutal for many fantasy players. The Christian Craig crash was the most punishing as his pick trend came in at an eye opening 55 percent. His one point tally had thousands of players screaming at their televisions and looking for their pitchforks. Austin Forkner also screwed the pooch, crashing yet again in the whoops and only managing a seven-point score. The other heartbreakers were Derek Drake and Jett Lawrence. Both were all-stars but their pick trends varied widely. Drake was not a fav, only attracting 5 percent of the field. Jett, on the other hand, had a great qualifying day and looked ready to get his first podium. We all know how that ended but the 26 percent of players that picked him got lucky as he had lapped up to ninth place, handing him and his fantasy owners 21 points. It could have been much, much worse.

Looking to Glendale, our first Triple Crown awaits. The dynamic changes sharply, as we will know who had made the main races before we are forced to decide our teams. Every team will have eight riders (unless you’re a complete moron). Scores will be tighter by nature but there is still value to be had. A rider like Mitchell Falk could get big points but he’s also dealing with a few issues so he could also DNF and leave you heartbroken. The big variable will be if any of the 15-16 handicaps find a way into the main event. If they do, every available team will have them picked. I am almost hoping against it, just to make the picks less obvious. We will probably see this happen in the 250 class, as riders like Jorgensen, Koga, Lionnet, etc could sneak in there. Christian Craig will be the obvious value when it comes to factory level riders, as his two consecutive DNF’s have pushed his handicap to a double-points eligible two.

For the 450s, the tough picks were Kyle Cunningham, Benny Bloss, Chris Blose, Justin Bogle, Aaron Plessinger, Justin Barcia, and Alex Ray, just to name a few. Most of those just missed their double points threshold, crushing the dreams of their fantasy owners. Worse, they will now be unable to pick them again at the Triple Crown event this weekend. Missing the timing by one week is the absolute worst fate that can happen to your team. Christian Craig’s upcoming weekend will most likely be a perfect example. In the 450SX class, that could be Justin Bogle this weekend. A great starter, the Triple Crown format could benefit him greatly. Blake Baggett’s -1 handicap could also pay big dividends if he backs up that speed he showed at A2.

Triple Crown events are always interesting because of the guaranteed qualifying. Players will wait until after the 450 LCQ and then dive head first into the handicaps. It will get dicey as players pick between very close handicaps. Scores will be closer but there are still points to be gained and lost. DNF’s still will happen and many will still scream in agony.

GEICO rolls out a timely advertising campaign highlighting Anaheim 2 and the benefits of motorcycle and health insurance.

Austin Forkner slips the Dirt Wurx crew a C-note before opening ceremonies in hopes of a heavy hand on the skidsteer bucket fixing the whoops.

Chad Reed ignites the crowd by sneaking into the main events directly out of timed qualifying.

Marty Davalos and Adam Cianciarulo send their qualifying pace into a different universe, one upping each other into oblivion.

Ralph Sheheen is finally able to stop answering every text, tweet, phone call, email, fax, and telegram with, “I will be back at Glendale.”