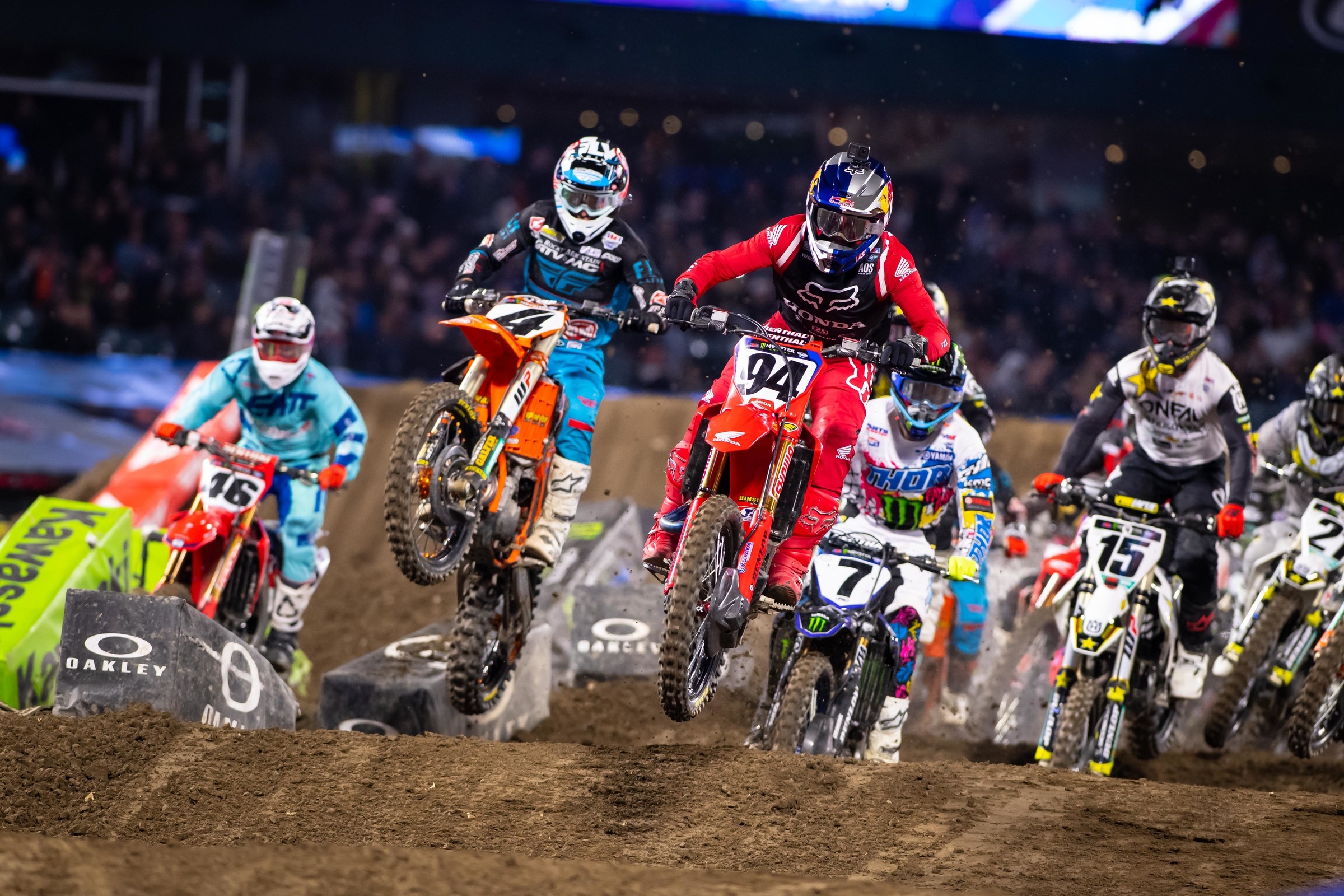 We fired some questions at former pro Jason Thomas this week to see his thoughts on some of the key talking points from Anaheim 2.

It was definitely a bad idea at minimum. Ferrandis was on a mission towards the front. Neither Craig nor Jett Lawrence are what I would consider to be first tier title threats. Yes, they are great riders, but I don’t think Ferrandis has a true sense of urgency when it comes to minimizing any damage against them. His primary concern would be on Forkner and Cooper. With both of those two riders behind him, it seems pretty clear that he rushed this move when he didn’t have the track position or angle to make this pass work. If Ferrandis was closer, Craig would have felt him on the inside and checked up to avoid a big collision. With him just a bit back, though, Craig felt he had enough room to slingshot off the berm without being blasted into Newport Beach. Ferrandis was impatient, that’s fairly easy to see. I am more curious as to why he felt such a sense of urgency. He is experienced and the reigning champ so he should have a more cerebral outlook than some of his competitors. The only real reason I can point to is the 15-point deficit he faced coming in. Perhaps he felt it so critical to capitalize on the opportunity (Cooper and Forkner behind) that he was willing to take big chances to ensure the win.

What improvements have you seen from Jett Lawrence in these short few weeks?

I was incredibly impressed. At A1 and St. Louis both, I was very ehhhh on Jett in practice. He had some big crashes and even more close calls. He looked to be trying too hard, over-riding the track and putting himself into harm’s way. At A2, though, he looked to have turned a corner. I didn’t see the sketchiness. I saw a confident rider with elite level skill. His style is breathtaking to watch and he simply does things on the motorcycle that others can’t. I am not sure what the difference was but I would assume he was able to finally take a deep breath and ride like he does during the week. Riding the test track for an off-season is one thing but a sold out stadium with Tuff Blox and strange lines takes some getting used to. It’s unfortunate that he appears to be injured but I was over the moon about his learning curve.

The whoops once again got Forkner. Do we chalk this up to “hanging it out too much” or is this just whoops being whoops?

I don’t think he was taking big chances or any real correlation to Nashville last season. That set of whoops was brutally tough, causing several crashes throughout the day and night. Just in that main event alone, Forkner, Alex Martin, and Jett Lawrence all crashed there. That’s three legitimate top 6-7 guys that all crashed in the same spot. That signals a pretty obvious difficulty so I won’t put too much onto Forkner’s mistake. The only silver lining is that only Justin Cooper has been consistent so far and the points gap is only 22. He will need to do some winning but the series is certainly not over.

What did you think of the A2 track overall? The riders commented that the whoops made a huge difference on how the night went.

I liked it overall. The whoops were tough but not because they were massive, unforgiving whoops. They were fast and edgy, asking riders to push the edge on speed but with the caveat things could get out of hand very quickly. With two true whoops section and another technical dragon’s back, the race was certainly won and lost on those three straightaways. The middle set was the real deciding factor and regardless of 250 or 450, there was huge time to be gained or lost. Eli Tomac was consistent and fast, blitzing his way across. Riders like Zach Osborne opted out early, choosing to jump his way through. Tomac’s blitzing was certainly faster but it was also a risk/reward play. It worked for Tomac, winning the race and cashing a huge check, but watching Forkner, A-Mart, and Lawrence’s crashes were a reminder of what can go wrong.

Everyone mentions the moisture “coming up” at Anaheim once the sun goes down. What’s that about?

I assume it’s the marine layer rolling in but it’s certainly a thing. Regardless of the meteorological reason, if there’s a race in Anaheim at night, count on it being slippery in certain areas. That moisture appears in the hard-packed corners, adding to the treachery. This weekend’s example would have to be Blake Baggett, as he pushed his front tire into what he thought would be solid traction. When he pivoted and wanted to turn hard right just past the mechanics’ area, his front tire performed the dreaded slide/catch which almost always ends in a high side crash. That event happens so fast that it’s almost impossible to recover from, especially when in the heat of the moment. It’s easy to see the trouble areas, they are shiny and a lighter color than the dirt surrounding them. Navigating them in the midst of a main event is a little more tricky. It’s a phenomenon that’s been around for decades and won’t end anytime soon. It’s also why you see many of the teams rent lighting equipment for night testing at their SoCal test tracks. Preparation can help but it’s still dicey when pushing the limits of traction. Go back through your mind and think of all of the front end washout crashes we have seen over the years at Anaheim and I will bet you’d be surprised how common it is. James Stewart has enough to have his own highlight reel alone. Anaheim at night could be the singular reason for the term slippery slope.

For approximately the 300th time, Eli Tomac is back on track. How can so much change in 14 days between A1 and now?

This is, somehow, what we have come to expect from Tomac. He can be the absolute dominant force he was this weekend, or he can wander aimlessly at the back of the top ten and there seems to be no explanation as to why. The most important thing is that he still has that elite speed that he displayed on Saturday. That next level is what will get him several wins this season and put heavy pressure on his competition to respond. If he does win several races like I expect him to, Webb, Roczen, Barcia, and co. will not be able to have any bad weekends. They cannot struggle through a 12th like Webb did and expect to be there for the title in May. They have to either find wins themselves, or mirror Ryan Dungey’s podium stretch from 2017. It’s an interesting dynamic that Tomac creates. He wins and yet also leaves opportunity but that opportunity requires near perfection to execute.

How does Zach Osborne go from first to ninth in a heat race but then card a fourth in the main?

I. DON’T. KNOW. The main event ride wasn’t surprising. That’s kinda what we expect from Wacko. The heat race was the puzzling one. I literally have no idea what he was doing in the heat race. He grabbed the holeshot and immediately went backwards. He was in fifth in less than a lap (guesstimating) and continued his march to ninth from there. I was actually worried that Chris Blose was going to pass him and get the final spot. That was a real concern! Going from first to ninth in a heat race is not anywhere in the game plan.

The main event was significantly better as we know. He rode well and battled his training facility teammates Cooper Webb and Jason Anderson. He showed speed and fitness, backing up his fifth in St. Louis. I was curious as to how the battle with AC9 would go but it was uneventful with Cianciarulo just not feeling it, sliding back to sixth by the checkers. I expect Zach to continue improving, gaining confidence each and every time he gets into the mix.

The freight-train battle with Webb, Anderson, Osborne, and Cianciarulo changed quite a bit throughout the main. Webb was at one point struggling but eventually pulled away and nearly caught Roczen. What changes during the race? Is this fitness? Is this a product of the track changing? How do battles evolve so much throughout a 20-minute span?

Twenty minutes doesn’t sound long but it’s an eternity for the riders. So many things happen during the main event. Riders find their groove and also make mistakes. Sometimes it’s mental and other times it’s figuring out a specific section. I attributed the Webb/Roczen situation to the whoops. Usually, Kenny is lights out solid in the whoops. He was struggling in the second set during the main event, though. For Webb, he transitioned to jumping them early and it paid dividends down the stretch. It wasn’t quite as fast as a well-executed blitz (see: Tomac) but it was consistent and became more and more viable as the whoops deteriorated. That change is two-fold, also, as fatigue sets in, it becomes tougher to blitz a brutally tough set of whoops. Jumping isn’t as taxing, saving energy early and also not requiring much late in the race. Webb is the master of utilizing the whoop jump method and was able to capitalize on it Saturday. The ability to jump whoops was a big key to his 2019 success and A2 was the first time he could employ his prowess. He suffers when blitzing is the only way but as we have seen, that scenario is few and far between by main event time.