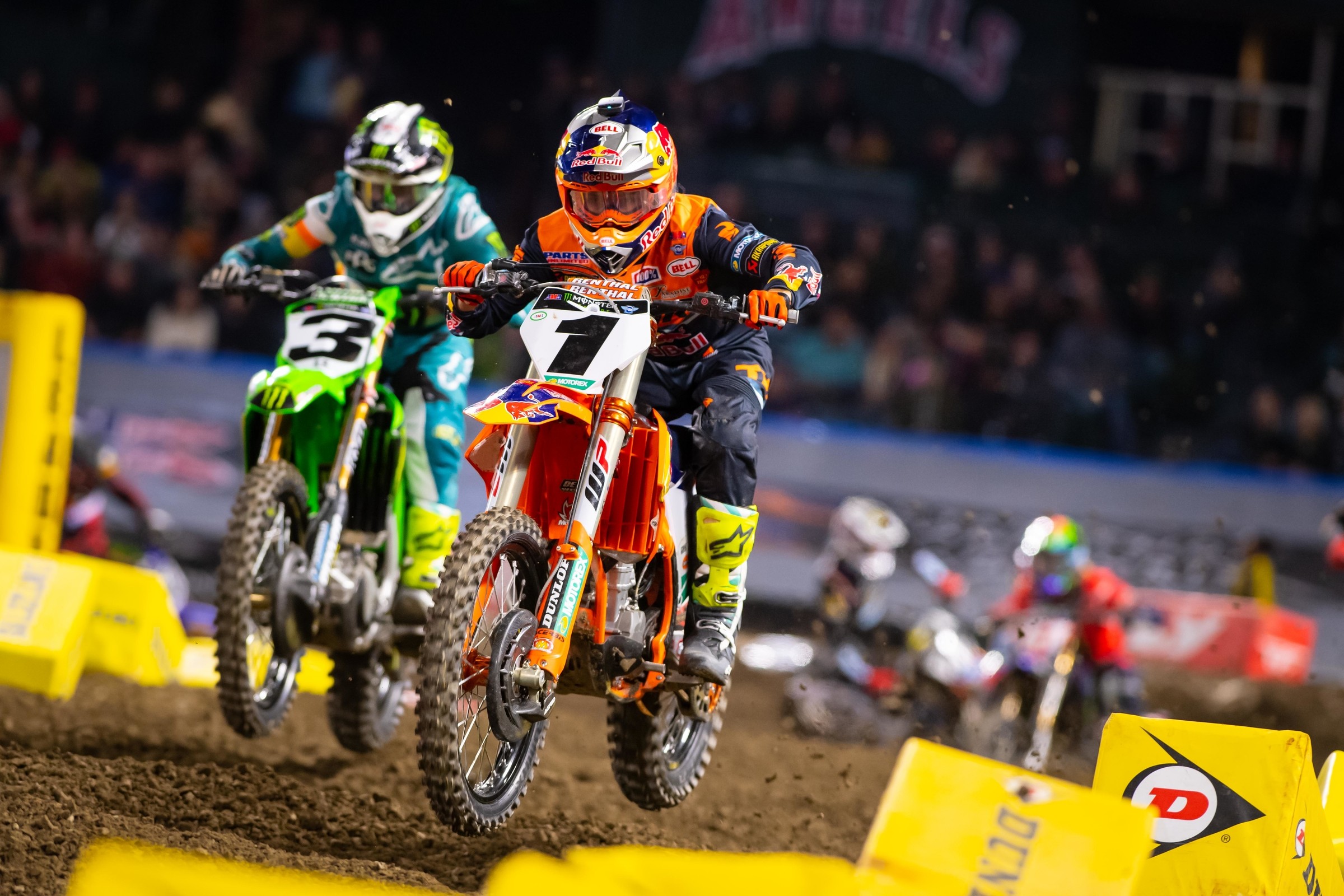 Monster Energy Kawasaki's Eli Tomac is just being honest—he was frustrated and fired up after the first two rounds of the 2020 Monster Energy AMA Supercross campaign saw him collect 7-4 finishes. He was even frustrated with a practice session at round three! His main event, though, was superb, as he turned a so-so start into a lead with some hard charges through the whoops. After that, he had his first victory of the season. Jason Weigandt talked to Eli just before the post-race press conference.

Red Bull KTM's Cooper Webb was back on the podium at the third round of Monster Energy AMA Supercross. Following the press conference, Jason Weigandt asked him about his recovery from the illness that sapped him of energy at round two, and his torrid battle for third place on Saturday night.

Racer X: Forget the win. You seem like you’ve been in a happy, good, light-hearted mood these last couple of races. Do you feel that way? Do you feel happier than usual?
Eli Tomac: No! It’s been a bit of a roller coaster. Between practice today I was fired up. I was mad. Practice one and qualifier, I missed this triple out of the turn three laps in a row and my head just wanted to explode. I’m like, I forgot how to ride a bike. So I’ve been a little bit of an angry person too. We’ve been improving. The first race was kind of a disaster for the ride I put in. And then race one, second-to-last start on the start. What are you going to do with that? This one, thankfully I had the inside. Still wasn’t great. Still need to improve there. I’m trying to do everything I can to improve on the starts. But I was able to slice and dice and had some really good whoops speed up to halfway. That’s what got me to the front.

Yeah, the whoops definitely went away, right? Was that the problem the second half?
Yeah, they went away. Second half, it did the typical Anaheim where I swear moisture came out with a combination of 450s just pummeling the track. So it got a little hard towards the end. Halfway was when we were moving.

So after Anaheim 1, were you frustrated? Obviously you don’t want seventh and you don’t want arm pump, but you were pretty fired up about that?
Yeah. I was really frustrated because I was on the setup that I was on for about over a month. I’m totally fine at the practice track. I come here and I can’t hang on for more than eight laps. So it’s frustrating because this has been years into the 450s and I still do the same thing over and over and over again. No matter what you’ll never know what’s right until you go race. Ever.

Do you always think when you finally get it right, this is going to be the last time I’m going to deal with this? And then it comes back again?
Yes. It’s just never the case. That’s racing. Got to be able to fix it.

What kind of changes did you make between round 1 and… Even last week was good. What did you do between now and then?
Just ride-ability. Getting through that moto.

Racer X: Speaking of feeling bad, do you actually feel good? Are you still in recovery-ish mode?
Cooper Webb: Ten times better. It’s been tough. I guess it was the Friday before. I wasn’t sure what happened Saturday. A1 I was not feeling good. Went back to Florida Monday and went to the doctor and had the flu and strep. So, tough week leading up to St. Louis. There’s not many things we can do with WADA and all that stuff. So I was pretty much on the couch for a week. Went racing at St. Louis and just didn’t have it. It sucks when it’s like that, but that’s the way it was. But it was a good learning thing. Obviously I wasn’t feeling well but I think we weren’t quite there with the bike, and my starts were off. Usually I can kind of salvage a start and turn my night around, and at St. Louis I didn’t do that. This week it was nice though to kind of get back to riding. Still wasn’t a hundred percent through the week, but I could at least ride and do some training. So that was nice. Looking to get better. You take your health for granted a lot. So it’s cool to just feel good again. I’m pumped obviously to be up here. We were pretty dang close, so can’t complain.

People are going to just think, how could there be bike stuff? You won the title last year. You can’t just run what you ran last year and just feel like it’s good?
We’re just always progressing. I think for me, one of the main things this year was whoops, last year that I struggled with. That was our main goal to try to fix that. We made some chassis changes. Now basically we’re back at last year. You kind of kick yourself in the ass and think, you could have started there. Obviously I wasn’t… As you’d see, these two that beat me were pretty dang good in the whoops, but I felt like I was better than most but still not the best. So got work to do there. I think that was the biggest thing. We’re just kind of getting back to base. My starts were good again tonight, so that made life a little easier.

The second half the race you were in this gnarly dog fight with Zach and Jason Anderson and Adam, and then you pulled away from them and started catching Kenny. What changed there in the second half for you?
I think at the beginning I just kind of honestly paced myself. I wasn’t sure if I had a full 20 in me from the last few weeks. Should have trusted in myself a bit more. Kind of once that halfway hit I was like, “Damn, I feel pretty good. So let’s go for it.” I knew those guys were behind me and I needed to break away. The gap was pretty big, honestly, with Eli and Kenny up there. Just kept plugging away, but a little too late. I got right there close at the end but just kind of… shouldn't say ran out of time because I should have charged harder sooner. But we’ll take it.