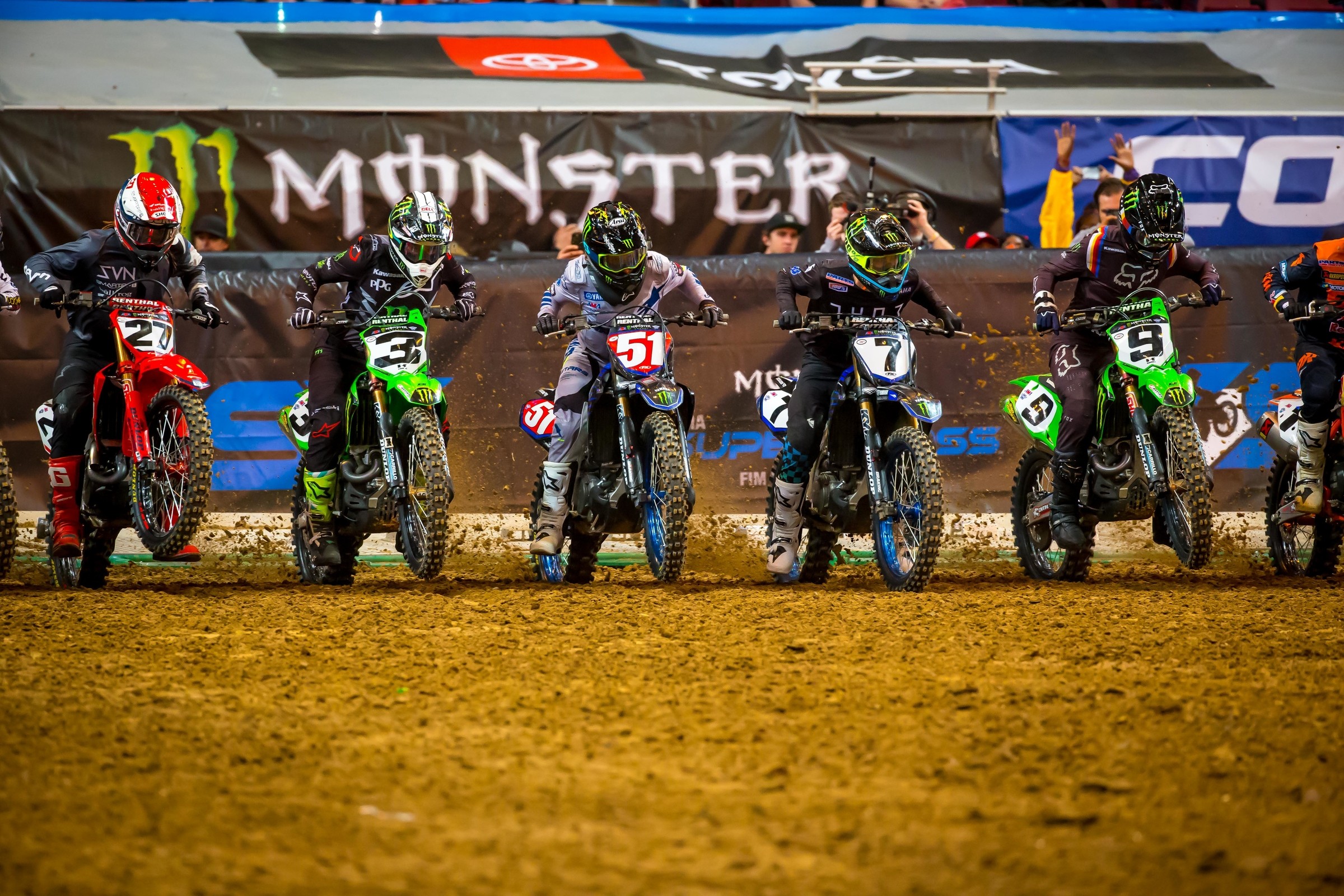 Welcome to Staging Area. We are going to get you up to speed and ready for Anaheim 2. Racing in the same venue twice in three weeks is always interesting. We race in this venue as often or more than any other (especially going back to the three Anaheim events of yesteryear). That creates a sense of familiarity coupled with this event being in the backyard of the moto industry. Most riders can stay at their house on Friday night and go through their normal routine, eat their normal food, and wake up in their own beds. That’s a pretty cool dynamic and one I would have loved to have when I was racing, but growing up in Florida, most races were too far away to be viable.

While the confines are familiar, the track is always significantly different. The layout will be totally changed compared to round one, of course, but the dirt is always much harder and more slippery as the days pass. That dirt has been inside Angels Stadium for a few weeks now and was also used for Monster Jam last Saturday. The sun bakes the dirt, and then Monster Jam compacts it, and that will ultimately create a harder base than we saw at A1. It’s a continuous process and was even more extreme back when he had Anaheim 3 on the schedule. The big differences I expect this weekend will be a bit less deterioration, a few less holes, and a bit more predictable racetrack. Where Anaheim 1 resembled an East Coast track, I think we will see more of the prototypical Anaheim hardpack this weekend.

The start this weekend is a little shorter than last week but what I am more interested in the angle of the turn. The turn is pretty sharp this week which can cause a pile up or two. It also makes the inside much more valuable as braking and sticking to the very inside can work out even if buried toward the back. The second turn is also a left, further increasing the value of being on the inside of the first turn. In other words, the first inside turns into a second inside. Riders on the outside have very little chance of success unless they grab a great jump out of the gate and cut over. Normally, the outside gates require driving deep into the first turn for a good start but with how sharp the turn is, driving deep will most likely result in a rendezvous with a Tuff Block. The ideal gates will be middle-inside and these will be more valuable than normal.

The first rhythm consists of seven jumps, all spaced equally. The first jump and the last jump might be a tad smaller than the middle five but that’s all at the discretion of the track builder. I think this section will be fairly straight forward as riders will cut across the inside of the corner and double, triple, double into the next bowl berm. Someone could opt for a 3-3-1 variation but I don’t think they will want to go outside in the corner leading into the section. That would create an easy block pass opportunity for any trailing rider, so 2-3-2 will be the way to go.

The next rhythm is the most interesting of the week. There are three singles that trend upward, two tabletops and then two small jumps trending back down. On paper, the ideal line will be to triple up, jump from the takeoff of the tabletop to the downside of the next tabletop, and then double into the corner. This could easily change, though, with varying steepness of takeoffs and landings. Watch for some creativity in this section.

The next section will be a big one for saving time. If riders can go 3-3 before the standard triple, that’s easily the fastest line. It won’t be easy though, as the corner before is flat and won’t lend to building momentum. The 450’s will have an easier time of it but watch for the elite 250’s to make this a priority. Jumping twice versus three times is a great way to save valuable seconds.

The next right hander is in the home plate area of the baseball diamond. It’s a flat right hander that leads into the first whoops section. These will be challenging without a berm to slingshot out of. Watch for a jumping line to form quickly as the B/C practices will opt for this route. It will be very important for the 250’s to exit with momentum as the second triple is immediately following the last whoop. Whether jumping or blitzing, everyone will be sure to gather themselves when exiting these, otherwise they may catapult their race bike into the parking lot.

The next right hander leads to another whoop section which will have heart rates spiking. There is a tricky double at the end of the whoops which will force riders to slow down and get that “pop” needed to downside it. They won’t want to jump too far here as the next berm is right at the landing. The ideal way through will be to blitz the whoops, pop up and over the double, catching the downside for a smooth entry into the next left. That will allow a smooth, fast turn and momentum through the next rhythm section.

The penultimate section leads to the finish line, a mix of doubles and a dragon’s back to single. I think this will involve doubling initially and then blitzing across the dragon’s back. That will be the smoothest, most consistent option. The finish line is short and easy, leading to a hard right hand turn across the start straight and mechanics’ area. Another 90-degree right hand turn sends riders into an option section. Stay tight and inside and riders will go step-on step-off and then double into the corner. If they swing wide early, they will need to triple-on step-off and then single into the corner. On paper, I can’t see the outside being viable here. That’s a bit frustrating as it just narrows the optimal line and lessens the chances of a pass. I wouldn’t be surprised to see Dirt Wurx adjust this on Saturday either before or after free practice.

Week two of fantasy moto was a thriller. Aaron Tanti was once again a hot topic, as well as fellow Australian Luke Clout and his teammate Mitchell Oldenburg. In a nutshell, everyone that screwed the pooch at A1 was prime picking for St. Louis. That’s how this game works. Nail the timing and you’re golden. Miss it by a week and you’re punching holes in your hallway sheetrock. It’s a brutal gamble and honestly there’s no real way to predict if your rider will flip down a straightaway or put in a solid main event. Anyone who has ever picked Marty Davalos, Jerry Robin, Alex Ray, or the like all understand what I mean. Big reward always comes with big risk. That’s the joy and agony of fantasy.

The questions for A2 will be on those that skipped St. Louis. Tyler Bowers, Ryan Breece, Jerry Robin, and Kyle Chisholm are just a few that are on the radar after opting out of STL—a few of which were racing in Germany. Aaron Tanti still has some value at a six handicap, as does Luke Clout back down to a three. I may be a buyer this week as both proved they can indeed make it happen. I’ve had two solid, yet average,  weekends so far, so I’ll have to up the risk factor soon. I have a feel for who’s who and what’s what, now it’s time to apply it. Look for a few fliers this weekend as the field finds its place.

Mookie starts 22nd in the main event and passes the entire field in the whoops section, miraculously leading the first lap.

AC goes fastest in all three sessions of practice, taking his tally to 9/9 in 2020.

Dylan Ferrandis wins after a week of silence from David Vuillemin.

JGR holds an open tryout in the pits on Friday.

The government of Ecuador steps in to assist Martin Davalos and his ever growing parts budget.

Cooper Webb ingests enough Vitamin C to reincarnate anyone and everyone who has ever died from scurvy throughout history. Vasco da Gama is seen roaming the pits afterwards, bragging about his voyage to India, blah blah.

Eli Tomac finds the podium for the first time in 2020.