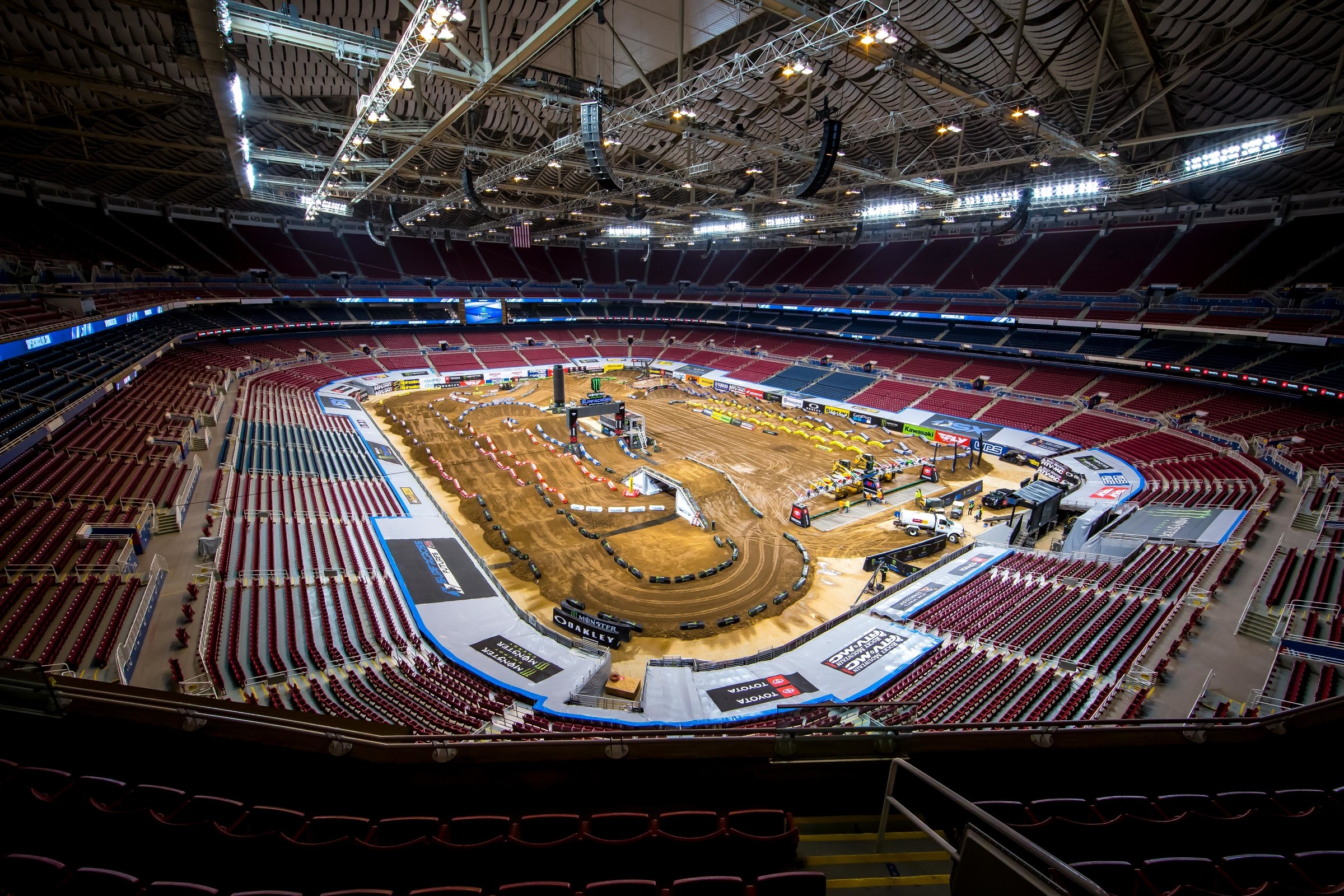 The 2020 Monster Energy AMA Supercross Championship stopped in St. Louis, Missouri, at The Dome at America’s Center last weekend for the second round of the championship.

This week for 3 on 3, we asked Kris Keefer and Denny Stephenson for feedback on the things they witnessed at the second round. Then we dialed up racer Jacob Hayes to get his perspective aboard his Gas Monkey Energy/AJE Motorsports’ Husqvarna FC 250. First, we will hear from Keefer and Stephenson on Ken Roczen’s win, the second round track, and Adam Cianciarulo and Justin Barcia. Then, Hayes discusses how the track evolved throughout the night, the first-section carnage in the 250SX main event, and building back up to speed from his injury in the Australian Supercross Championship.

1. What’s your reaction to Kenny’s win?

Kris Keefer: Kenny’s win made everyone in our industry happy! How could it have not? Kenny has worked his ass off to come back from his injuries and is one of the most down to earth riders we have in the paddock. I also think this win is huge for the Honda squad as well. I know Trey Canard has been working hard with Kenny on the bike and it’s cool to see him get a slice of that win too! There are a lot of really good dudes over there in the Honda pit so I am happy for Kenny and the whole squad. When I watched the race back on TV I noticed near the podium one of the Feld Entertainment workers try to tell Courtney (Kenny’s wife) to go up on the podium stage while Kenny was getting interviewed. You could tell that Feld and the NBC Sports people wanted to get her to share in the moment, so they could capture it on TV for the world to see. However, you see that she declined to go up at that time, so Kenny could have his moment on camera. She gestured to the Feld/NBC workers that she was going to stay around the team of Honda guys that surrounded her. It almost seemed like she was saying “I am going to stay right here with these guys until he’s done so we all can congratulate him as a team.” I thought that was just simply bad ass by her! She was a big part of Kenny’s win, but she let her man handle the interviews and wasn't worried about getting on camera and sharing a forced moment. They shared their moment when they were both ready and on their own terms. I respect the hell out of that because in a world where a lot of people just want to be seen, she stood back with the team, hugged each and every one of them just so she could thank them for their hard work. Huge respect from me, Courtney! Great job on the win Kenny, and, more importantly, finding a good woman. #Homelife

Denny Stephenson: How can you not be happy for Kenny? After everything he has endured, to finally hit the top of the box with a solid and convincing win this early in the season? Look the f*** out kids. Honda and the popular German are back. He was my preseason pick to win the title. Bandwagon time!

2. Some different jump rhythms out there. What did you think of the track?

Keefer: I thought the track was tough enough to separate the riders but didn't get as rough as A1. The whoops were not nearly as big, but the rhythm before the finish proved to give more than a couple options for the riders. I also really like the over under bridge jump face as it let riders throw their bikes around in the air and have a little fun. Watching the riders rail the bowl turns in St. Louis made me want to go ride the track because you could tell the dirt and traction were amazing.

Stephenson: St. Louis ALWAYS has some of the best dirt and one of the best layouts each season. Being back in a football stadium allows for long lanes which in turn brings a lot of variations. Having such great dirt also prevents the track from getting so rutted. I realize this is some basic stuff, but you asked. Honestly though, I usually don't like such a gnarly rhythm section right out of the first turn but unless your last name was Ferrandis, it was relatively crash free each race.

3. AC and Barcia have been breakthrough sensations for various reasons at the first two rounds. What do you see them doing right?

Keefer: Both of them are getting good starts and putting themselves up front early. AC had a little trouble in St. Louis, but if it wasn't for the run in with Osborne early in the main, I see him getting at least a third place. AC also has crazy rolling corner speed and carries so much more momentum heading into obstacles. He sets up the corner early and commits to the throttle better than anyone that I have watched this year. I think Barcia has been doing better than we’ve seen in quite some time because his YZ450F has better settings and I also think working with Tom Danielson a little closer in 2020 has helped his physical strength, and also his mental strength. Tommy D is an ex-pro cyclist that has worked with Barcia for a couple years, but for 2020 you will see Tom and Justin working together a little more closely. I think this will be a huge asset for JB51, and so far, he looks much improved.

Stephenson: Let's start with Barcia. We all know what Justin is capable of. But we also know, when he's the underdog in a series, he likes to rise to the occasion as he has once again done these first two rounds of 2020. The true question remains, can Bam Bam stay out of trouble, stay off the ground and better yet, stay out of his own head for an entire 17-round SX season? Now AC on the other hand, it's been a long time since we have seen a rookie enter the 450 series with so much hoopla and high expectations. A1 Adam almost pulled off the win like many thought he could. But at round two, we saw him make some of those rookie mistakes. He tried the same move on Osborne as Kenny did, although Adam failed to jump the double after, Oz had had enough of being pushed around, dove it in deep on the #9 in the following 180 and pushed him into the tuff blocks. This totally changed the rest of the race for the newbie. Throw in a last lap crash and AC finishes the race in seventh. Oh what could have been. The real question is, how many rounds will Elito Mac keep the real #3 locked in the Kawi rig?

1. Compare the track from practice, heats and main. How much did it change and breakdown?

I always feel when we got out for free practice everything is fresh / still getting broken in, the jumps are steep, whoops are good so it’s just going out there to get the feel for the track more or less, practice to practice things slowly change such as rhythms, whoops etc. by the second timed practice that’s basically the track you’re racing on, they just finished up track prep so everything is dialed. Coming into the heats, the track is super good, best you’ll ride it all night that’s for sure, but by the main event the track has had a lot of laps on it throughout the day so things that were sharp in free practice now they have fixed it to where it flows a lot better so getting into the main tracks pretty good all in all.

2. First rhythm off the start turned ugly in the main, with Michael Mosiman and Dylan Ferrandis going down. You just missed the carnage. What happened from your perspective?

From my perspective I was in a good position coming into the first rhythm off the start but things get tight really quickly. I wasn’t sure who it was but I felt someone hit me like mid-air and all I could think in my head was "Please don’t get landed on! Please stay up!" It’s tricky off the start, we’re all going for it to get that good track position, so you have to go for it.

3. You had a good ride on Saturday. Have you surprised yourself coming back from injury?

Honestly, I had no expectations coming into A1. I had, no lie, three days on a supercross track before A1, so I just wanted to get in the main and from there just do the best I could. To leave there with a 11th was unreal! I was really happy to just be there racing so that was a win for me with no prep. Fast forward a week I was able to get more comfy on the bike and I felt better knowing I had a main under my belt. I just wanted to do the same thing as I did at Anaheim and position myself good and fight all the way to the end and I did just that. Happy with my progress, because from round one to round two was an improvement and I felt better on the bike so I just wanna keep making that progress.