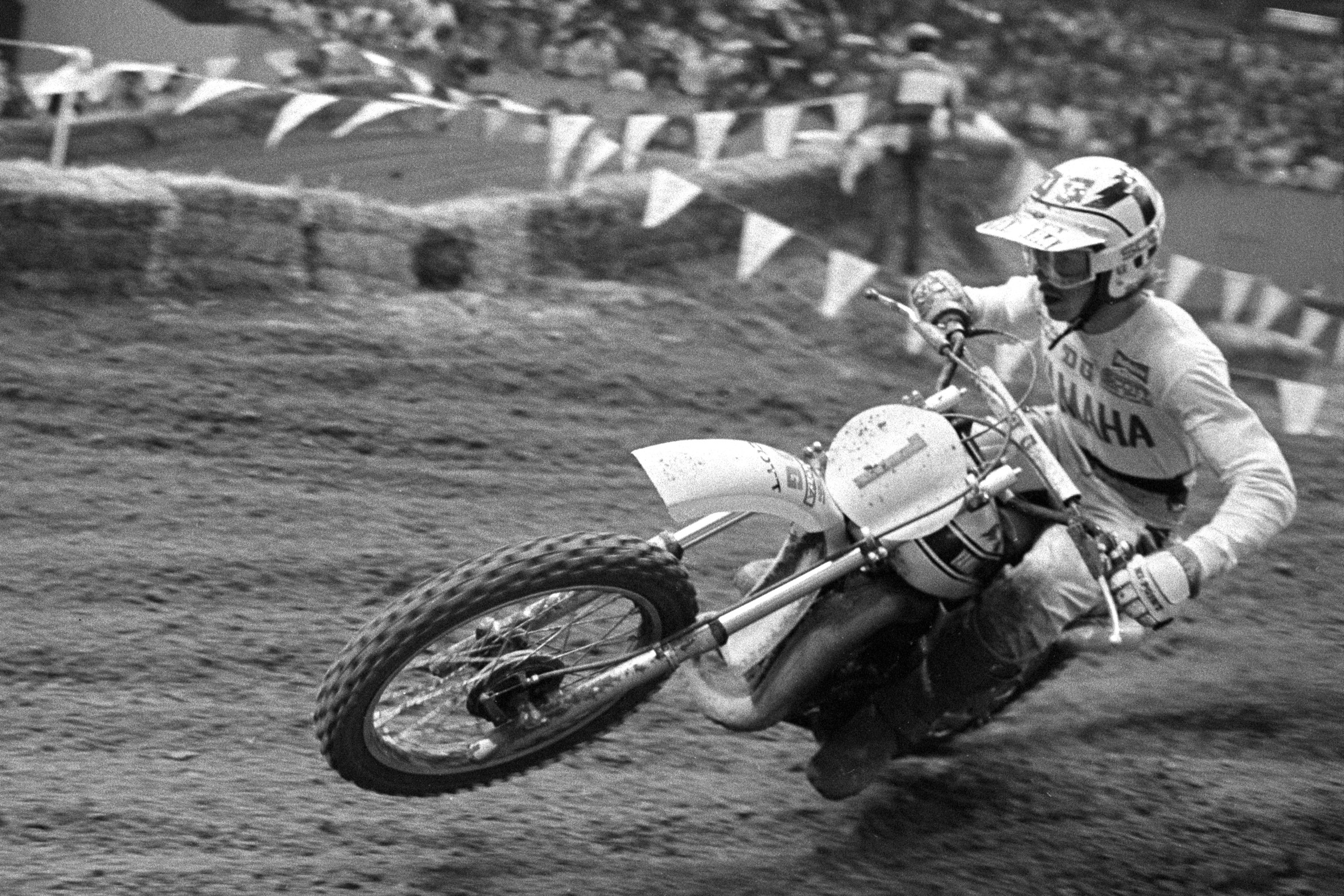 Over the years we've heard a lot of AMA Supercross Champions say that winning their first title was hard work, but defending it was often ever more difficult. In two weeks, Red Bull KTM's Cooper Webb gets to explore that challenge, as he will be wearing #1 for the first time in the 450 class in AMA Supercross. How have other first-time title defenders fared over the years? For this week's List we're exploring the first title defense from each supercross champion. Specifically, we're exploring the years when the series became more than just a few rounds scattered across the motocross calendar, but a full-blown happening of ten races or more, which was 1977.

Bob Hannah was the first AMA Supercross Champion to not only repeat, but three-peat. After taking his first title in '77 aboard his Yamaha, Hannah got off to a rough first title defense in '78 as he finished 3-12-4 in the first three rounds. But then, the Hurricane went on an all-time tear, sweeping the next six rounds of the 11-race championship. At the time it was the longest winning streak in AMA Supercross history, and it cemented him as the dominant star of the 1970s, especially after he easily won again in 1979.

Hannah is shown above in the main image for this post during the 1978 Supercross Championship (Photo by Jim Gianatsis).

After Hannah was forced to miss the 1980 season with a broken leg, costing him a chance at four straight titles, his young Yamaha teammate Mike Bell stepped up and won in 1980. "Too Tall" Bell was a California kid who grew up in a motorcycling family and used that support to ride into the AMA record books. But his '81 title defense was hampered by a knee injury, and it prevented Bell from winning a single race while wearing the #1 plate. It also began a string of seasons in which a first time AMA Supercross Champion failed to repeat, as you are about to see...

Sadly, when it was time for Hansen to defend his title, the #1 Honda was not on the starting gate at the Anaheim '83 opener, nor would Hansen ever line up again, as a massive crash in September '82 while preparing for the Motocross des Nations in Germany left him in a coma. Hansen would fortunately recover, but he would never race professionally again.

Into the opening left by Hansen at Honda rode David Bailey, and just like Donnie, David won his first AMA Supercross at the Anaheim opener, then led pretty much the entire season to win the '83 title. But defending it proved harder for the Little Professor. He did not win in any of the first four rounds of his title defense in '84, and by then the door was open for yet another first-time champion from Team Honda.

Johnny O'Mara did the exact same thing as Hansen and Bailey did, earning his first-ever AMA Supercross win at the Anaheim opener ('84) and then going on to win the championship. But unlike Hansen and Bailey, O'Mara started out his title defense with a win at the '85 opener at San Diego in January. However, that was it for wins for O'Mara until the last round of the series at Pasadena in August, and by then the title was out of reach for #1 O'Mara.

Jeff Ward took his first AMA Supercross title in dramatic fashion, holding off the charge of Yamaha's Broc Glover into the last round at Pasadena's Rose Bowl, where controversy began when Ward rode his bike backwards briefly on the track as he restarted after a crash, a move usually penalized by the AMA, but not this time. So Ward put the #1 plate on his Kawasaki KX250 for the first time for the '86 Anaheim opener, only to fail to qualify after crashing out of his heat race and then breaking his throttle cable in his semi, failing to even qualify for the LCQ. It was a terrible start to his first title defense, and he never recovered.

Rick Johnson did not win the Anaheim '86 Supercross opener, arguably the most exciting race in AMA Supercross history. Instead, the victory went to his teammate and rival David Bailey. However, Johnson did get the bigger prize in winning his first AMA Supercross title later that year. Then, in an incredible coincidence, RJ, like Wardy the year before, failed to score a single point at the Anaheim '87 opener after he crashed early in the main event and knocked himself out, finishing 21st place! Johnson was never able to reel Wardy in, who won his second SX title in '87. Johnson would do likewise in '88.

The era of RJ and Wardy taking turns winning titles ended in 1989 when Johnson broke his wrist at the Gatorback National opener while running away with the AMA Supercross title (the series overlapped then). Moving to the front of the pack was Johnson's young Honda teammate Jeff Stanton, who won his first of three AMA Supercross crowns. Stanton would successfully repeat in 1990, though he failed to make the podium in the first two rounds, which were won by Yamaha's up-and-coming superstar Damon Bradshaw.

One of the more curious stories in AMA SX/MX history was that of Jean-Michel Bayle, the incredibly talented French import who won all three AMA titles (250 SX, 250 MX, 500 MX) in 1991, absolutely shaking the foundations of global motocross. But when it came time to defend his titles in 1992, JMB wasn't really interested—he had already decided that the next world he would conquer would be road racing. That didn't quite work out the way he hoped, and his '92 SX title defense didn't quite work out the way Honda expected, but they took the title anyway, as Stanton came through for his third.

Like most things involved with AMA Supercross, no one was more dominant in a first-title defense that Jeremy McGrath. After literally taking over the sport the year before as a 250cc rookie winning the '93 AMA Supercross Championship, McGrath started his title defense in 1994 by winning the Orlando opener on the #1 Honda CR250 while also unveiling his soon-to-be-trademarked Nac-Nac trick. He went on to win the first four rounds on the trot and ran away with a second straight title, then added a third the next year and fourth the next.

One of the most troubled title defenses AMA Supercross has ever seen came in 1998, when Kawasaki's Jeff Emig rode out with the brand's first #1 plate in AMA Supercross since Jeff Ward in 1989. Emig had broken an eight-year run at the top for Team Honda, helped in part by the last-minute switch from Honda to Suzuki for McGrath before the '97 series opener. McGrath had an uneven year on yellow, and Emig took full advantage. However, when it came time for him to defend the title, Emig went 2-3-4 in the first three rounds as #1. Then, the bottom fell out of his season. He never won a race, and at times he struggled to even finish in the top ten. He ended up dropping out of SX early and did not finish in the top ten in final standings.

We talked with Emig about defending a title, as well as other topics, recently.

Ricky Carmichael catapulted to the top of AMA Supercross in 2001, winning 14 of 16 races and the title on his Kawasaki KX250. But then, he switched to Honda at the end of the season, much to the displeasure of some fans. He also showed up at the Anaheim '02 opener with #4 on his Honda CR250, not the traditional #1, as Carmichael wanted to trademark his #4, which he certainly did in the years to follow. But on that first night at Anaheim he cartwheeled while chasing after Mike LaRocco, crashing out of the race and scoring just one point for his last-place finish (20th). But by the fourth race Carmichael was back up front and winning race after race. He would repeat as champion, then repeat again in 2003.

When Carmichael scratched from the '04 series with a busted knee, Yamaha's Chad Reed was more than ready to take over—he had beaten RC in the last six rounds of the 2003 season of AMA Supercross. Reed took the vacant '04 title with relative ease, then had to face the "perfect storm" to start his first title defense in 2005: Carmichael was coming back, James Stewart was moving up to the premier class, Kevin Windham was going to be a title threat, and even McGrath was coming back part-time. Unfortunately, with rain nearly drowning out the Anaheim '05 opener, Reed (wearing his own #22 instead of #1, RC-style) had his front brake lock up in the mud, and struggled to 14th. He never really caught back up, though he did win five main events and finished second to Carmichael (now on a Suzuki) in the series.

After RC raced into retirement while everyone was completing the switch from 250cc two-strokes to 450cc four-strokes, James Stewart won his first AMA Supercross title in the premier class in 2007 aboard a Kawasaki KX450F. That summer he injured his knee while leading the outdoor nationals, but thought he was good to go to start 2008 and defend his first SX title. He was not. Though he split the first two rounds with Reed, Stewart, wearing #7 on his Kawasaki, held a surprise press conference before the third round (Anaheim II) and announced that he was dropping out of SX to get the knee fixed. It was a shock to all and opened the door to Reed's second AMA Supercross title.

One of the most surprising AMA Supercross Championship runs was that of Rockstar/Makita Suzuki rider Ryan Dungey in 2010, in what was his rookie year in the premier class. Dungey was more than capable as a 250 rider, but everyone thought he would be going up against incumbent champions and rivals Stewart and Reed, only to have both drop out early. So, in 2011, Dungey would be wearing the crown, but he found himself without the two men who helped shape his early career, Roger De Coster and Ian Harrison, who each moved from Suzuki to KTM. Dungey also had to battle with a game Ryan Villopoto, who was his main rival in 2010 before RV fractured his leg. This time RV stayed healthy and won by four points over Reed, with Dungey third.

Finally, in 2018, there was a new rider to emerge and win a first AMA Supercross title, but it wasn't really one of the guys anyone expected before the season, like Eli Tomac, Ken Roczen, or Marvin Musquin. Instead, it was Rockstar Energy Husqvarna's Jason Anderson, who gave the reborn brand its first-ever AMA Supercross title. But when it was time to defend it in '19, Anderson found out just as others have in the past how heavy that #1 plate can become when you’re first defending it. He went 14-2-9 in the first three rounds, then got hurt and missed the rest of the series. The winner would be another first-time champion in Red Bull KTM's Cooper Webb, who will wear #1 beginning on January 4, 2020, at Angels Stadium in Anaheim. He will certainly have his work cut out for him, as Monster Energy AMA Supercross history has shown!