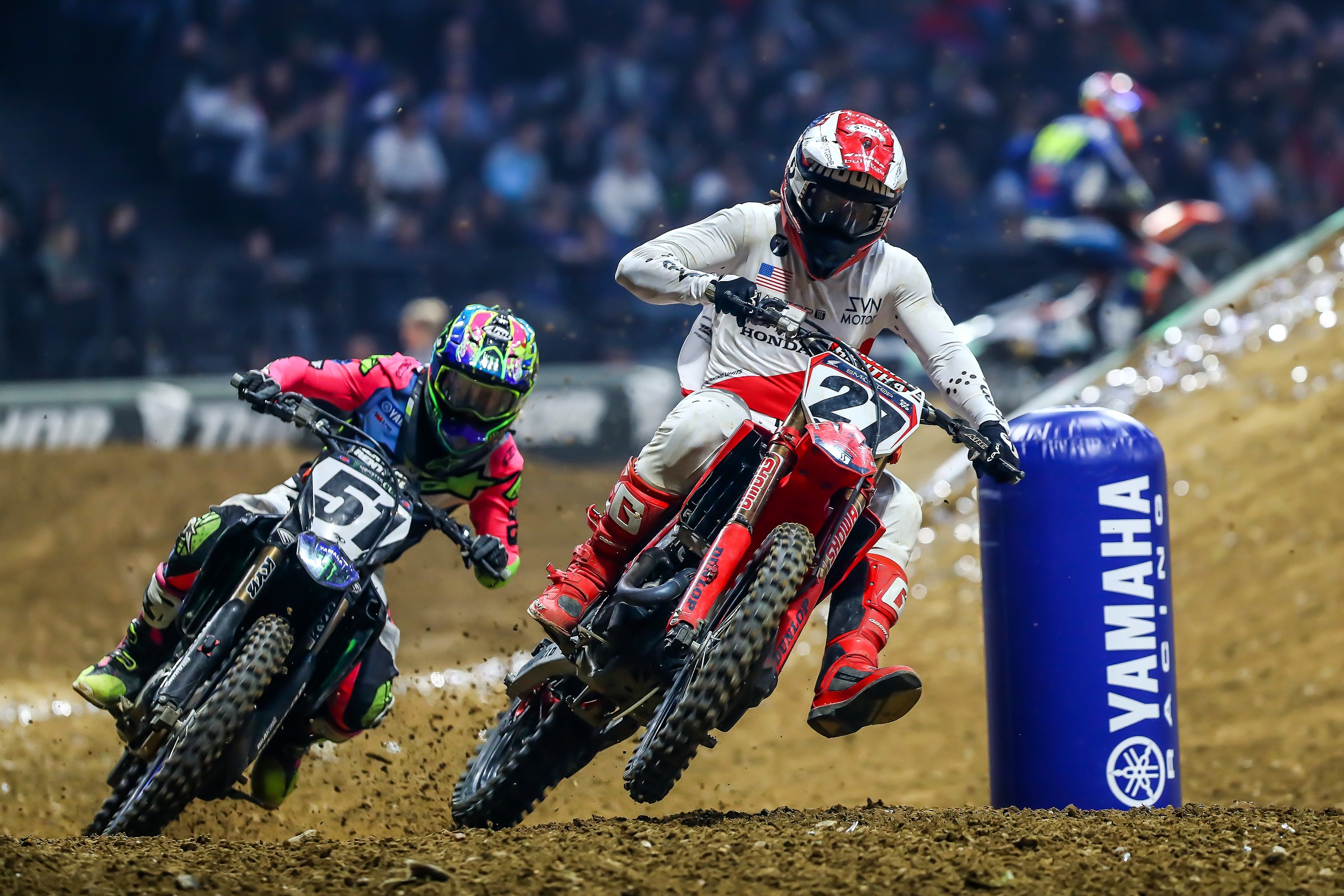 Malcolm Stewart won three races at the Paris Supercross, going 3-1-1 to take the overall on Sunday. When Saturday and Sunday’s results were combined, he finished second in the King of Paris standings to Justin Barcia. Stewart has now completed three of four off-season races in preparation for the 2020 Monster Energy AMA Supercross Championship (the Montreal Supercross and the Monster Energy Cup in October and he will race the Geneva Supercross in early December) and he’s shown great speed in all three. He has said multiple times that it’s great to be back racing and his training has showed that he’s prepared come 2020 Anaheim 1.

Steve Matthes caught up to Stewart afterwards to talk about the racing but quickly got called out for his shorts selection and not having Malcolm on the PulpMX Show enough.

Racer X: Overall winner today. Second overall I think to Barcia overall. I didn’t look, but I assume so.
Malcolm Stewart: Yeah, second overall and in first just for tonight. It felt good. All weekend I felt really good, just had some bad luck on my side. First moto last night, me and Jordan Tixier got into it. Then me and Ferrandis did a front flip through the first turn in the last main last night. So again, really I was just like, I ain’t crashing no more. I already got enough battle scars as it is, so let’s just go out here and have fun. Really just put my head down and just clicked some good laps. I ended up third the first one and then won the second one. Kind of gave me an open window. I saw Justin [Hill] and Ferrandis got into it on the last lap. I’m like, yeah, I’m going to take this. Then Justin made a mistake. Me and Justin [Barcia] been together all weekend, but it’s cool. We showed a lot of respect for each other, just trying not to take each other out because at the end of the day we know it’s not just this weekend. It’s A1. We want to wipe the slate clean. We don’t want to start off with it. That’s a lot of hate for a lot of months.

He likes it, though. He thrives on it, but not you.
I try to be nice to everybody. First I want to say, what’s up with the cargo shorts? I saw this guy yesterday. He was just wearing Dickies. Was it Dickies?

They were Fly Racing shorts, actually.
No, actually I think they were Walmart.

Sometimes I can get classy.
Real classy. I like you better in the cargo shorts.

Yeah, it holds my stuff. You were beating down those whoops like they owed you money. That’s what I tweeted. Today you were just crushing those things.
Yeah. The superpole, I just literally remember coming in and I just held them wide open. I got halfway and I’m like, if you crash, this is it. You’re done.

I tweeted that you were levitating above them in the superpole.
I was like, if I don’t win the superpole, that’s a thousand dollars. That’s a nice little plane ticket on the way home. Maybe first class with some miles. Again, for me, it’s just having fun being over here. I got a solid race under my belt. We done did three—Montreal, Monster Cup, and here we are in Paris, and in a couple more weeks we’re doing Geneva. I’m more just happy to be back racing. Nine months, that took a lot of out of me. Like I said, for us just to be back, it feels good.

It looked pretty good today for sure. Like you said, your starts were much better. That was a lot of laps though in the main event.
Yeah. For 14 minutes I was sitting there. I remember looking up at the board and I’m like, we’re only seven minutes into this race. I swear I’ve done like eight. I knew for a fact we done over 20 laps. But that’s it. That’s the whole [plan] coming over here. We put on a show for the crowd. I think you kind of use this race as just a little fitness test. That’s the way I look at it. Just to see where you are. Of course, it’s not as wide as back home and A1 and stuff, but the intensity is there. The racing, the gate drops. We have some heavy hitters—Justin Barcia, Dylan Ferrandis, my teammate Vince Friese, Reed, Hill. There’s a lot of good guys here. So it’s not like it’s just a rollover race. Everything today, we’re here to have fun, but it’s kind of like that little bragging rights kind of deal too.

Early in the main you lost .8 to Dylan on one lap. I don’t know what happened. Then you started clicking down and .2, .2, .2. You started stretching it back out. Do you remember what you did?
I’m assuming, let’s just say I got sketchy in the whoops. I don’t really know. I could hear the crowd and they were making me nervous. The closer he was getting, I could hear the French fans getting louder and louder. I’m just like, he’s a French rider. This is his hometown. I think he had a little bit of juice on his side. So I was like, I got to squeeze that out. So I hit a couple ninja moves over there and stretched it back out. But he rode good. I think that was good for him just to pressure me like that. It kind of gave me a little fitness test to see where I’m at. We got a month and some change before A1. We got a lot of work to do still, but I’m happy. The whole SmartTop/Bullfrog Honda. Obviously Shoei, Scott, Gaerne, Toyota of Escondido, my mechanic, Jason. Seven, just everybody that has my back, all the fans. Both of my teammates rode good tonight. They had a couple good rides. Really I think one of the coolest parts about it is actually hanging out with Chad a lot this weekend. He’s just so down to earth. We’re over here literally talking about his kids in the airport Fortnite, and they were thinking it’s me. So like I said, I think that’s one cool thing about coming over here. Everybody is really chill. Of course back in the States everything is really serious but we’re here just to put on a good show for everybody and everybody just wants to go home safe.

Good job. Thanks for doing this. We’ll see you in a couple weeks in Geneva.
I think you need to just get me on the show, man.

You were just on. We just had you on.
Just on? So you just going to write me off the script like that or what? Am I not good enough to make it every Tuesday, Monday?

We can have a weekly Mookie call-in. I feel like you’ll ghost me, though.
I feel like you can call me at least every two or three weeks and I’ll feel a little bit better.

You’re always a very interesting interview.
If not, I’m going to take all your cargo shorts.