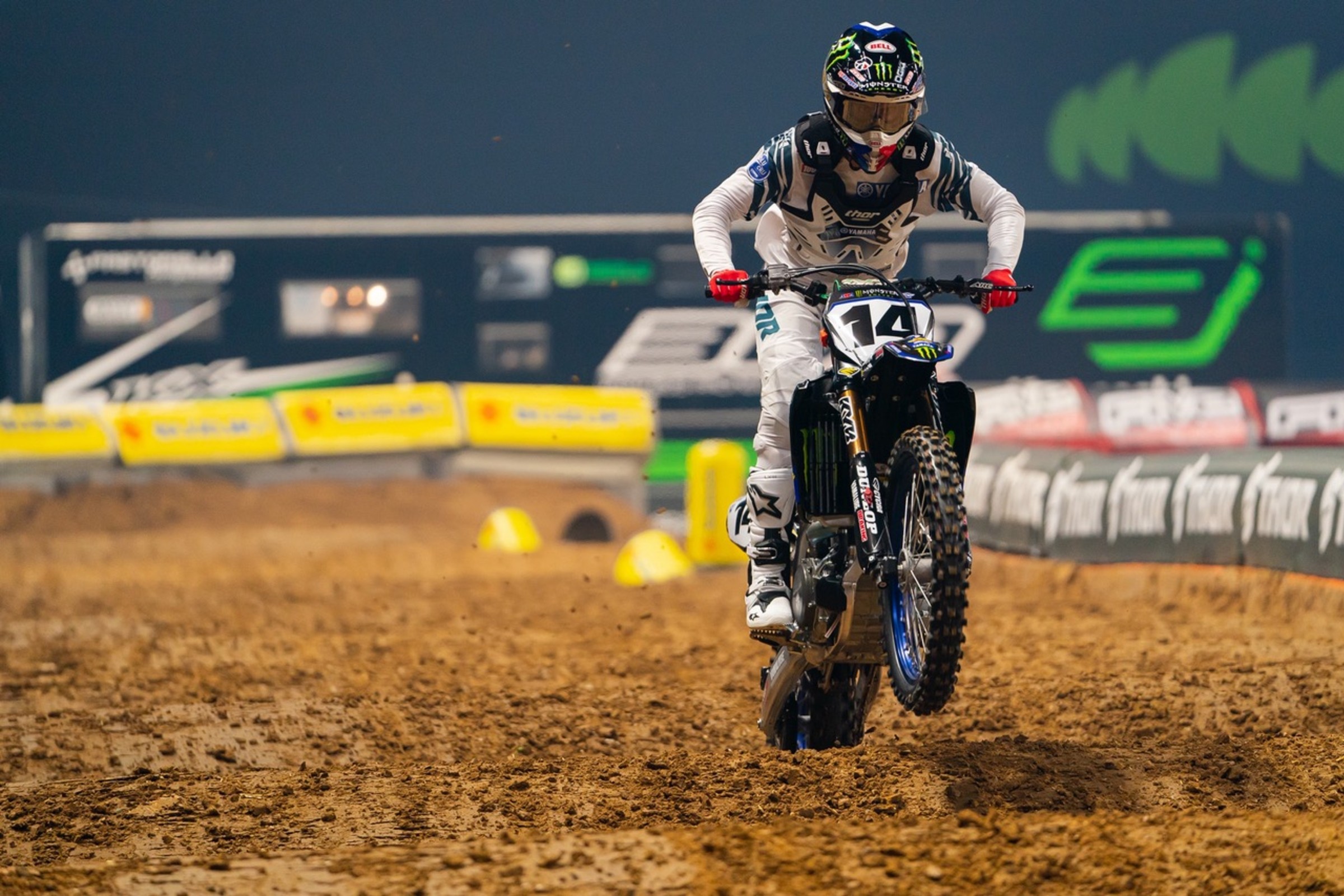 Monster Energy/Star Racing Yamaha’s Dylan Ferrandis returned home for the Paris Supercross with hopes of being named King of Paris. For the French fans, it was an opportunity to watch Ferrandis in action again (like the 2018 Paris SX, when he finished second to Jason Anderson) and to get to meet him.

For Ferrandis, it was an opportunity to showcase his skills on the big bike and an opportunity to get a gate drop in the middle of the off-season—while also taking time between races to meet and talk with fans. The French fans have high expectations for him and, as you’ll read in this post-race interview with Steve Mattes, Ferrandis said it’s not easy to keep everyone happy both on and off the track—especially after an accidental get together with Justin Hill in the first race of the long weekend.

Racer X: When you stayed upright and got good starts, the speed was there. Unfortunately there wasn’t all of that.
Dylan Ferrandis: Yeah. Like you said, a lot of mistakes. Not always from me, but that’s racing. This race is really a big show, so we have to make the show. Sometimes it works, sometimes not. For sure, I showed some good things. I think I showed that I’m really competitive on the 450. A good lap time and won the one race. I was really disappointed about my move on Justin [Hill]. I never wanted to do that. I’m not that kind of rider. On Saturday in the first main. I told him. I just over-jumped and couldn’t brake enough to turn safe in front of him and made him crash. So I was really disappointed by myself for that. I said sorry again. After that, some crash, especially at the start. One with Savatgy. We banged bars.

You stood him up and you guys kept going.
We saw on the video actually that he clipped my front brake, with his shoulder or his elbow. I just went straight, so big crash. Last moto I crashed with Malcolm on the start. So my bike rebound to me, I hit my face, my tire hit my face. It was pretty rocky, but I still ride for try to save some points for the podium at least. It was a good thing because I did actually podium. So I think I showed some good things, some mistakes. But like I said, this race is a show. Especially for me it’s really, really difficult to be good because everybody expects too much from me and it’s tough to stay focused on the race and make everybody happy. The crowd wants me to win, but they also want to meet me. So it was not easy this weekend. I hope everybody is happy and I made a good show.

I was going to ask you about the pressure of being the guy, the hero, everyone’s looking at you. It’s tough.
It’s not really the pressure, because when my helmet was on it was just good. It’s before. Everybody just wants to have something and you cannot make everybody happy. Sometimes I’m too nice and I take time for the kids and stuff, so that takes a lot of energy. Like I said, I’m in France one time per year and it’s the only place where they can see me ride. I hope I make a lot of people happy. That’s the most important.

You told me last year this race was a dream for you as a kid, coming racing, and now here you are. You’re the guy. That’s the dream of it. I thought you were going to get Mookie there in that last one. You caught him pretty good, and then he slowly inched away from you.
Yeah. He was today really fast. I think yesterday I was maybe a little bit faster, but today he was really, really fast. The thing is, I was expecting nothing on the overall. So it’s tough. It’s the last race. We’re all tired. The track was gnarly. It’s tough to take a lot of risks for just one place. He’s a 450 guy for a few years now and he has the experience and everything, so for me it was good training for the next season and also for 2021 because this is the year I will make a big move to the 450. I really want to get a lot of experience and also to show what I can do on the 450 in a race like that and show to the next 450 team what I can do.

Barcia’s pass on you. Any problems with it? Were you all right with it?
It was a big mistake from me. I land too much on the left side of the triple and I hit neutral. So I basically crashed alone. I touched him, but I crashed alone. It was a shame for me, really.

I thought it was fine too, a mistake. Also too, I thought you slowed down too much for those yellows in that rhythm section. You really slowed down.
Yeah, I slowed down because I couldn’t see what happened there. I slowed down and he catch me on that. This moto was a shame for me. I should have won it. I was so disappointed.

Like I said, when you stayed upright on the start, very good. Thanks for doing this.
Thank you very much.