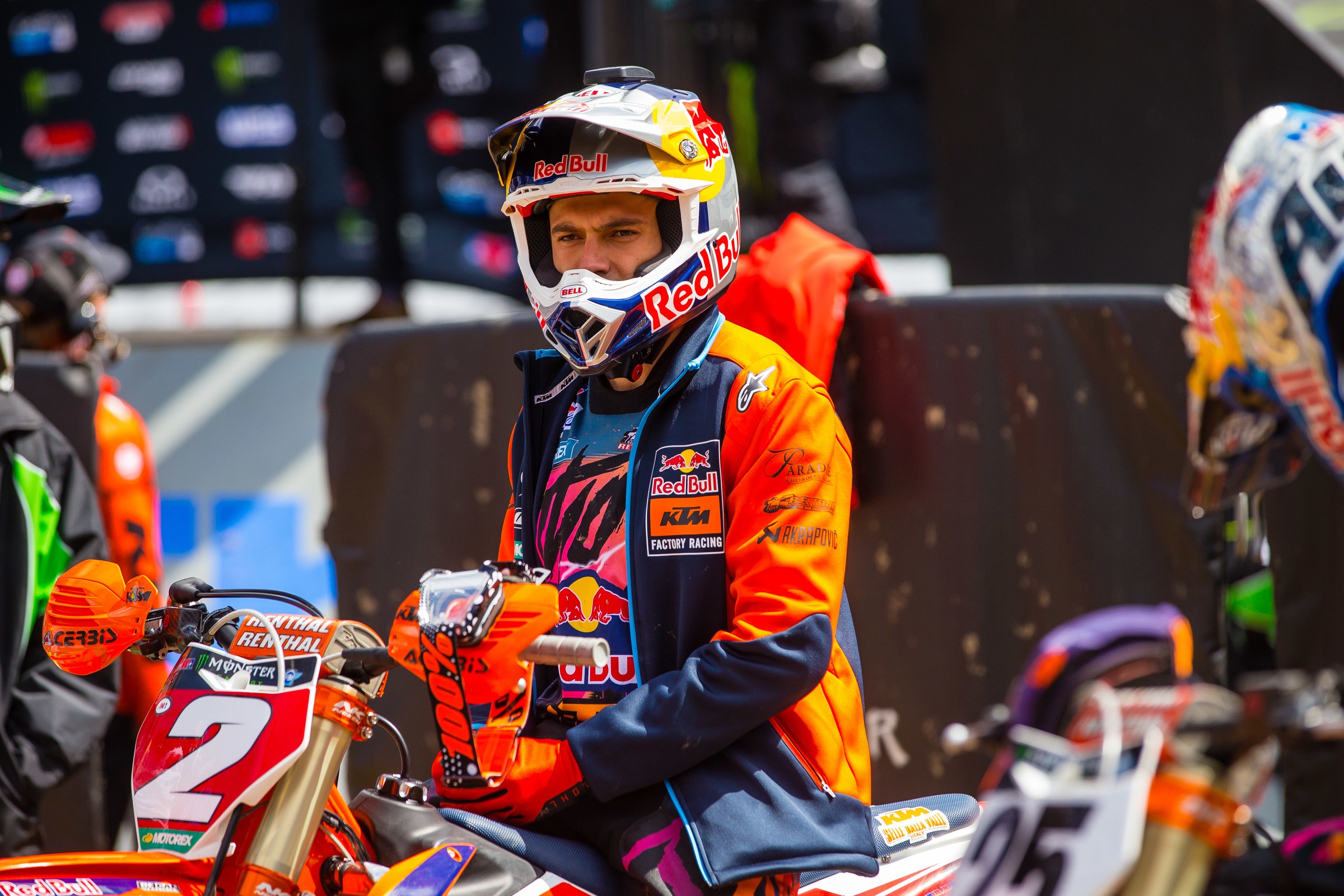 I had a conversation with a friend on the phone the other day. We talked, as we often do, in amazement at the animal-instincts of the hero riders at the front of the pack. Do not try to apply rational thought to riders that win races. Their minds operate on another channel, another level, another plane. They’re animals. They operate on instinct.

That’s not easy when your mind is slammed with all the potential rational thoughts that could cloud the mind of a dirt bike racer. For one, the chances of injury are irrationally high. Broken bones are only a matter of when, not if. Some crashes could be even worse than that. Second, consider the level or work and effort needed to make it to the top level. From sacrificing everything as a kid in hopes of making it, to sacrificing everything as an adult to actually make it—and even at the very top the pay is still not commensurate to the risk and work, at least in comparison to many other professional sports. A lot of this makes no sense. It’s a massive mental exercise to not even notice these things, live in the moment, and boil the focus down to one thing: hit this turn harder, get on these brakes later, scrub that jump harder.

As we dove deep into this psyche during this conversation, I cited my latest example: Friday practice day at Red Bull Straight Rhythm. There, Travis Pastrana, Ryan Villopoto, and Josh Hansen toyed with a difficult triple-quad-triple rhythm section. Note that these three riders are no longer full-time racers, and they have no real rational or financial incentive to try a difficult jump combo. On two-strokes. On practice day. At a race that counts for basically nothing.

Later, Tyler Bowers nailed the section. Bowers is a real full-timer still, but he was jumping the jumps on a 1991 KX500.

None of this made sense, but that’s what made it awesome. Villopoto kept lining up the quad and clipped it hard with his rear wheel. He survived and should have quit when he was ahead, but, nope, he was operating on instinct. He had to get this quad so he could win! So he headed back to the start, tried the line again and cased it so freaking hard. This was an impact and it immediately looked like Ryan had hurt his chest or shoulder from slamming into the bars.

He ended up being okay, in so far as he was able to compete on Saturday, but he was never quite the same. He got eliminated by Parker Mashburn.

Look, Red Bull Straight Rhythm doesn’t mean anything in the grand scheme of anything, but that provides a true window into the psyche of these riders. Even when retired, even with no reason to risk it, these guys only know one way. It’s one thing to quad for an actual supercross title. It’s another to do it because it’s just what you do.

[It’s interesting, by the way, that Ken Roczen literally said he wanted no part of the quad and had to figure out a different way to win. In that, he had to rely on his mega-scrub skills to eliminate Hansen, who had the quad wired. Most riders at the top level operate without fear. Kenny has been through too much hell at this point. His moves have to be more calculated.]

Anyway, pardon my digression into Friday night practice at Straight Rhythm. That was the point of this conversation, though. For some riders, the amazing skill is obvious. Jeremy McGrath could downside jumps like a BMX rider. James Stewart mainstreamed the scrub. Ricky Carmichael could just tape the freaking throttle open and somehow not crash. Bob Hannah, too. Chad Reed’s trademark is his relentlessly stubborn belief in himself—and also a hell of a lot of supercross talent. But what, really, is Ryan Villopoto’s super talent? Was he the fittest, strongest, or fastest rider ever? Was he the best at whoops or starts? He was pretty good at all of those things, but there isn’t one “killer app” you can apply to Villopoto. Except one thing: he was a bad dude, mentally.

This is worth some focus, because nothing draws our attention like the mental game. Riding analysis and bike setup are for the coaches and the technicians. Fans, bench racers, they just gravitate to the human drama and what we perceive an athlete is “thinking.”

So, the next time you’re having a convo about this subject and these athletes, think about Villopoto. This sport is gnarly and turns people into head cases. The pressure, the nerves, the fear, can overcome any rational mind. To compete at the highest level, every rider blocks that out to a significant degree, but few defeat it almost completely. Those are the rare ones that perform their best in the races, and get better as the stakes grow higher. They’re essentially turning a weakness for most into a strength for themselves.

This skill is harder to detect, though. It’s not plain to see in an Instagram banger. The only evidence comes when piling up years of evidence over a variety of situations, and noticing a similar outcome. Villopoto first truly ascended in 2011, when he won, gasp, the AMA 450 Supercross and Motocross Championships, Motocross of Nations, and swept the Monster Energy Cup. All in one year. And yet, going into 2012, James Stewart, Chad Reed, and Ryan Dungey were still considered equals. It would take several more years of Villopoto titles for everyone to realize how dominant he really was. Because his dominance wasn’t as easy as watching a scrub photo or a lap time in practice.

I’ll tell you who is playing that game right now. Cooper Webb. Over his career, has Webb been considered, hands down, the best at any one particular part of racing? Next level cornering or style or jumping or fitness? Like Villopoto, he’s good at all those things, but I don’t think he moves the needle in those departments. I do believe he turned himself into the best starter in 2019, but he won his 250 titles without being a good starter. Webb isn’t Mike Alessi or Jeff Emig out there. He’s just really good at everything…and then when the gate drops, he peaks.

And so, you’re seeing the same thing during this off-season as Villopoto saw after 2011. Webb’s season wasn’t as dominant as RV’s in 2011—he didn’t also couple his supercross title with the motocross title. You’re already seeing some snickering from fans. Was he really the fastest guy? The best guy? Can Eli Tomac go faster? Can others? Maybe they can. But Webb’s skill isn’t the stuff you see on an Instagram post or a stop watch. He does his best work in the trenches, when it matters, by executing under pressure. It’s harder to see and harder to detect. In fact, it might take multiple titles to truly realize it. But the mental  game matters, and when someone has it, they’re harder to beat than they appear. It will only make this upcoming season more pivotal, more unpredictable, and more exciting—because until they’re all actually on the track, not all the skills are readily apparent.