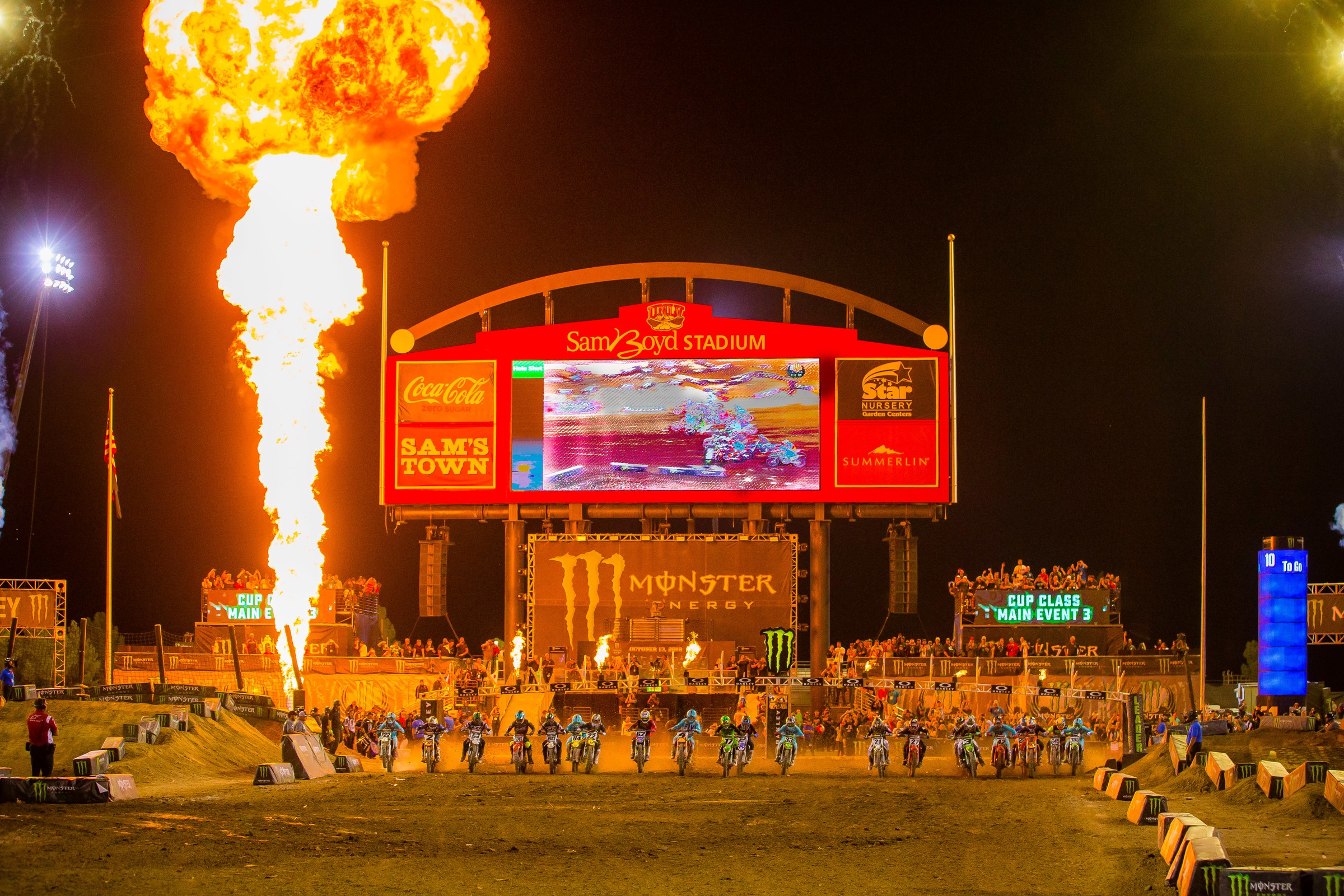 Supercross is back. Okay, it’s kinda back. The oasis in the emptiness that is the off-season has arrived and the industry will flow back into Las Vegas over the next couple of days. The Monster Energy Cup is going on its ninth year after moving away from the MGM Grand location a couple of years prior. I have a feeling this will be the last go-round for Sam Boyd Stadium as rumors have this event moving either to the Las Vegas Raiders new stadium or out of Nevada entirely. I have mixed feelings on the venue but can’t argue that the event could use an infusion of excitement somehow. The rider entry list is not helping, either, with several stars opting to rest and test during the month of October. Regardless, I am excited to see the gate drop Saturday night. The ingenuity with the track layout, the return of Tim Gajser, and Adam Cianciarulo’s 450 debut provide plenty of intrigue just to get things started.

The start is certainly going to be a big talking point on Saturday. With two separate starting gates, three separate first turns, and a track that will be run in both directions, this is certainly the most “out of the box” track design that Feld Entertainment has ever green lit. It will be interesting to watch riders learn two tracks on the same day. The jumps will have unusual shapes in order to work both directions and track builders will also have the amateur classes in mind in terms of safety. Where a standard supercross track is fairly straight forward, there are many more aspects to consider this weekend. The ideal starting gate will change in all three races. The Joker Lane will change throughout the course of the night, forcing riders to stay vigilant and sharp. We have seen how difficult that is on a consistent track layout with both Ryan Dungey and Ryan Villopoto forgetting the Joker Lane in the same night. Most importantly, the constant change will create a bit of uncertainty. We have seen Eli, Ryan Villopoto, and Marvin Musquin simply dominate this event in the past. With so much change, hopefully that will provide some variance in the results column. The lack of star power at the top of the entry list won’t help but the track crew has certainly done everything they can on their end.

Here's the track that will run backwards:

Read more on the track designs in this feature from August when the tracks were revealed.

The notable storylines for this event:

Packing bags It’s race week ?? So excited to get my first gate drops since Seattle It’s been such an amazing summer that I totally forgot I hadn’t raced since Seattle ??‍♂️ Hope to see y’all out at the @monsterenergy @supercrosslive Loving this @foxmoto set up ?

Tomac will be the favorite to win another million. Does anyone know if Jesse Hebert is still alive?

Tim Gajser won a second world title this year and just won his class at the Motocross of Nations. Will any of that matter Saturday?

Dean Wilson has had a smooth off-season and already has a Montreal win to boot. He will be sneaky good.

Adam Cianciarulo has been riding supercross for a few weeks already, something most other riders won’t be able to claim on Saturday. I look for him to be in the mix to win at least one of the main events.

With Marvin Musquin still ailing from his Ironman crash, Cooper Webb deciding he’s not quite ready, Blake Baggett’s and Justin Bogle recovering from illness, Jason Anderson and Zach Osborne both taking time off, the Austrian powerhouse combinations of KTM and Husqvarna are needing big efforts from Dean Wilson and Benny Bloss.

JGRMX/Yoshimura Suzuki hasn’t nailed down their 2020 lineup and will sit out the Monster Energy Cup.

Chad Reed is just a huge blur on television as his entire bike and body is covered in CBD logos.

Tim Gajser lives up to his nickname at some point during the night’s racing.

I hold my breath during the entire SuperMini portion of the event.

Steve Matthes asks “who are these people” every single time the 250 Futures and SuperMini classes hit the track.

Jesse Hebert is dragged onto the podium a la “Weekend at Bernie’s” in celebration of his million-dollar prize a year ago.

Some rider at some point goes in the wrong direction, misses the Joker Lane, uses the wrong first turn, slips on a banana peel, etc.