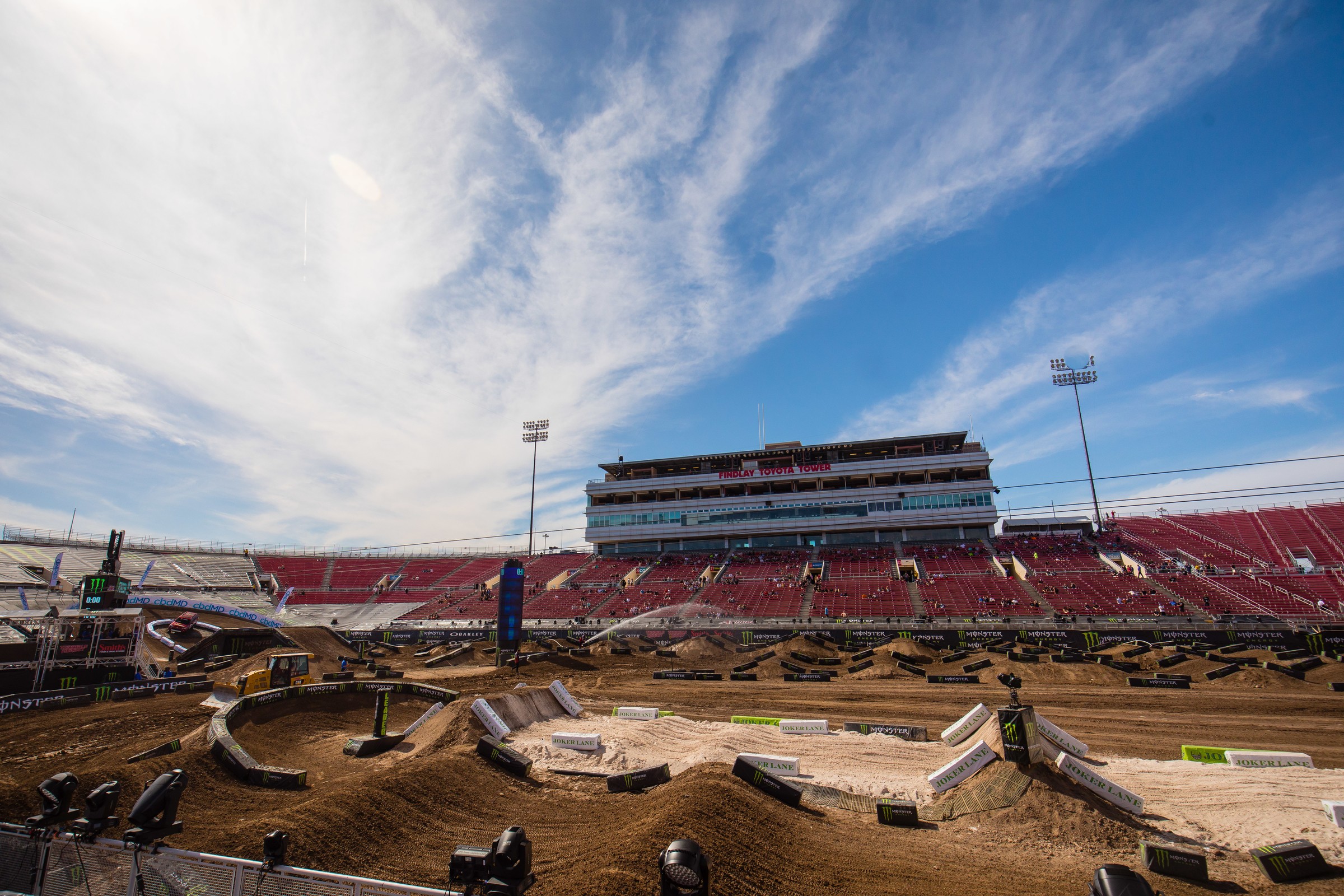 The off-season rages on and that includes the Monster Energy Cup here in Vegas. The MEC has had a complicated relationship with the sport since rising from the ashes of the US Open in 2011. It’s closer to the end of the season than the beginning of the next one, riders are sometimes in-between deals or just getting into a new ride and you can’t really take this race seriously in terms of who’s ready and who’s not. The prep for this thing varies with different guys.

I’ve always said that there’s no reason to not have this race at the beginning of December as a pre-season type of race and for the riders and teams, it would be a good chance to see where you’re at with your new parts, training program and prep. The fans would be more into it (judging by attendance recently, this race seems to be less packed than before), it would help with the eternal MXoN issues, it would simply mean more.

This seems like a no brainer to me. I know the team managers have expressed a concern that the riders could get hurt so close to Anaheim but newsflash, we have plenty of injuries at the test tracks before the year starts. Let’s make MEC great again and put it in December!

As a non-points race, Monster Energy Cup always gets to experiment with different ideas, and this year’s big one was three different starts and the track being run in two different directions. I mean, sure, why not? I never really thought that trick was all that cool but I’m all for trying things. Having the takeoffs be landings and vice versa seemed a bit sketchy and the riders did tell me afterwards that it didn’t really work but all in all, it seemed to be something that maybe wasn’t a home run but it wasn’t a failure. I liked the Joker Lane this year, it was a legitimate obstacle. The track? Well, it is what it is. When you’re trying to make it work for Superminis and 450s and then you add in that it needs to also run backwards and forwards, you’re just not going to get an amazing track.

We don’t normally have a lot of injuries at this race but this year both Jordi Tixier and Dean Wilson crashed hard in practice and missed the race. Tixier had a bad concussion after a scary crash and later on in the same section, Wilson went down hard and dislocated his hip and fractured his pelvis. Huge bummer for both guys and best of luck to them getting healthy.

Coming into this race, I didn’t know what to think. With the lack of star power (including Wilson, eight factory riders weren’t there, and five did show) I’ll be honest—I wasn’t that stoked to go watch it. I just thought we’d see Eli Tomac win the thing (maybe take the million with a sweep) rather easily, Adam Cianciarulo get on the podium and no matter what else happened, it would be inconsequential for Anaheim 1 in 2020.

But you know what? We saw pretty good racing thanks to that Adam kid! He and Tomac went into the third main event tied for the overall (along with Malcolm Stewart. Mookie Fever is back!) and Eli was all over AC for just about the whole main event. Tomac taking the Joker Lane one lap before Adam was great drama and, as you know, Cianciarulo held on for the win. The new #9 won his first ever 450SX race and although it doesn’t really count for the record books as an official supercross, it’s still very impressive.

If you’re Feld Entertainment and Monster Energy, this is the best thing you could’ve hoped for. You had the rookie kid win his first race on the new bike, the favorite got second, you didn’t have to give out a million bucks, and three riders went into the last main tied for the overall. Good night for those people!

I always thought Adam Cianciarulo would be fast…that’s not in question. Whether he’s on a 250, 450 or a riding mower, the guy can ride it fast. He qualified second and I thought he’d be on the podium this weekend so the win, while surprising, didn’t blow me out of the water. Still, he was impressive for maintaining composure while he had the winningest SX rider of the last three years all over him.

Afterwards, Adam told everyone that he was just stoked he kept his bike on the track when asked about the different track directions. That was pretty funny. Cianciarulo really gets it, man.

Speaking of Eli Tomac, he didn’t bring home the million like last year and he got second but he was pretty good. Kawasaki guys told me they told him to take a month off after Indiana so he hasn’t had a ton of time back on the bike (use this as more evidence when I say riders come into this race with varied levels of prep). He did make a couple of mistakes as well but overall, he looked good. Even though they use different suspension companies, I wonder if having Adam there and maybe pushing him a bit will help Eli with the bike set-up in 2020?

MCR Honda team owner Mike Genova was talking to me after the race and mentioned that I would be visiting his truck a lot this year because they might just be the factory killers. I mean, they look like they have factory suspension on the bikes so I’m not sure they fall under the “privateer” team status but hey, I understand what he means. Malcolm Stewart won the second main event in a great ride and finished third overall. The series is better with Mookie in it and I hope he can have a strong 2020 season. For all the speed, for all the hype, Mookie’s never gotten a top five in 450SX and only eight top tens. He needs to make something happen this year and I think he will.

Vince Friese led eight total laps in two of the mains. He looked good also! We tend to forget about Vince because he got injured last season and also, well, because of the other things that he’s done over the years but MEC showed that his recovery is on track. He’s such a good starter, good things usually happen to him. Leading laps in two mains at the MEC on his way to fourth overall was a big surprise and has to leave him and the team very stoked.

MXGP champion Tim Gajser came back over for this race and unlike last time, he made a good impression. His 7-4-4 finishes for fifth overall is solid and watching him carefully on press day and in practice, I didn’t see many moments where he looked out of place. For the most part, he looked just like any other rider out there with a lot of supercross racing experience, even though he actually doesn’t have that. He used Honda’s SX suspension this time which had to have helped a bunch, as opposed to last time when he had moto stuff and it went badly.

Jeremy Martin came back! He was very proud that he hid this fact from the media until he Instagrammed the announcement on Thursday. Jeremy hasn’t raced for a year and a half and to jump into the 450 class (although this track is tamed down) speaks volumes to his progress. Great to see him back and although he went down twice in the last main event, he was very competitive in all the races.

Come to think of it, although Kawasaki took the top two spots it really was an interesting race for Honda right? They had a massively fast dude in his second race back from a bad injury (Mookie), they had a FIM Motocross World Champion racing something that’s not familiar to him (Gajser), a heavily paid 250MX champion coming back from a year and a half on an unfamiliar bike (Martin) and they had another guy they support back from injury (Friese). All four guys got good starts and flooded the early laps with red bikes. Lots of subplots and mostly success for Honda at the MEC!

And they had Chad Reed! Well, not in any official supporting category but Reed came back to race and chose a Honda. He was rusty (he had to go to the LCQ!) and ran around the top ten for most of the main events. Afterwards he was pretty happy with everything and his decision to race. He leased his old JGR mechanic (Ben Schiermeyer)  from the team, Mike Gosselaar came back out (!!), the old JGR suspension guy (Jonny Oler) did his suspension and the whole program worked out of a box van! Things were weird for sure but Chad had a pretty good attitude about the whole deal really. Looks like he’ll be on a Honda for the overseas races and I can’t believe Suzuki and JGR couldn’t work something out to keep him. They badly needed to do that but things are in a state of suck for that team right now. Hopefully they get enough support to get to the races in 2020.

Jett Lawrence won the amateur 250 Futures race rather easily. I don’t know, I saw Jett race and run top ten at some nationals this summer so not sure how he lining up against a bunch of kids that probably don’t get free bikes and go to school is fair? I’m not sure but yeah, good for him. He did eat a donut on the podium and that’s awesome. [Editor’s note: Oh, Steve, Jett Lawrence is the only rider on the gate on a factory team and not going to public school?]

Evan Ferry won the Supermini class and while I was happy for him, this also made me pretty depressed. Let me explain it this way: I used to bug JGR’s Dean Baker because he worked for Mike Craig and then later his son Christian. So I always told Dean that meant he was old and needed to hang it up! Well, I worked for Tim Ferry as his mechanic for four years and now I’m interviewing his son after a SX. FML.

Although to be fair to me, Evan’s not pro…yet.

Benny Bloss always seems to ride well at the MEC and he did that again in his farewell ride for the Rocky Mountain ATV/MC-KTM-WP team. Bloss and Marty Davalos need to keep riding and keep working hard because when a replacement ride opens up, they’ll be on the short list.

Oh and I also heard at the race that Team Tedder has a commitment from KTM for a factory bike to try and sign a big name.

Justin Barcia was there and honestly, I barely noticed him. Quiet night for Bam Bam…didn’t even seem like anyone got mad at him either!

Chiz has barely been riding and he STILL beat Alex Ray. That is all.

Jerry Robin riding a 450 and qualifying himself right into the top 18 over riders like Mike Alessi, Chad Reed was pretty surprising, right?

Thanks for reading, hope you caught the MEC fever! Email me at matthes@racerxonline.com if you want to chat about this race or anything else.