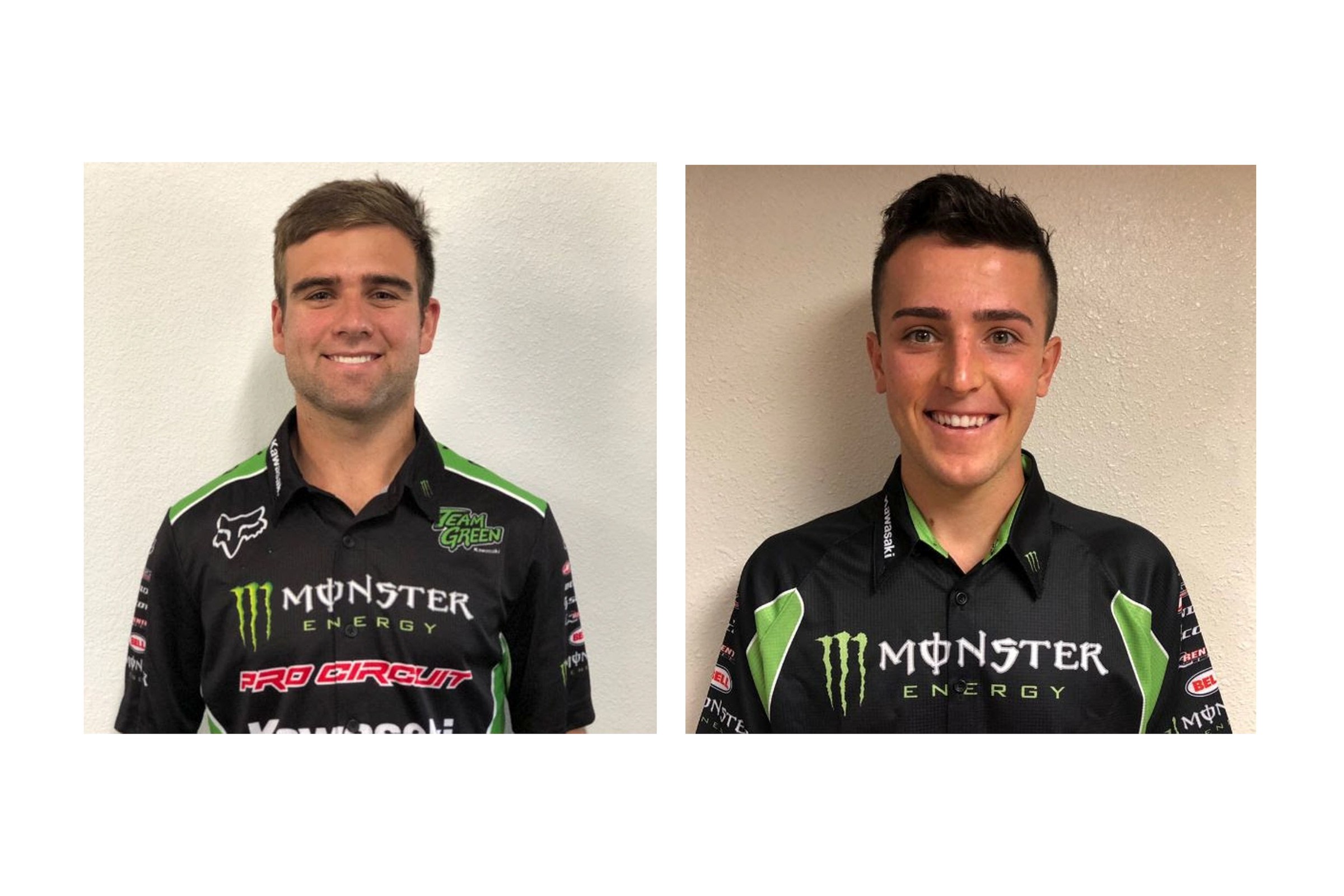 The standard factory racing contract in the U.S. begins October 1, so riders switching teams have to wait until then to announce the news. Deals are actually signed well in advance of that, and word of team switches usually leak out, but you won’t hear a word from teams or riders until that date. If a rider is seen in public with his new logos before that date, his old team could hold the last paycheck, or worse.

So we all have to wait until October 1, which is today. As such, Monster Energy/Pro Circuit Kawasaki has just announced its 2020 lineup, welcoming two new faces to the team in Jordon Smith and Cameron McAdoo. Austin Forkner and Garrett Marchbanks will return to the team. Martin Davalos is out after pointing out of the 250SX ranks, and Adam Cianciarulo is moving to the 450s with Monster Energy Kawasaki.

Smith turned pro with GEICO Honda, but spent three seasons with Troy Lee Designs/Red Bull KTM. His first season was a great one, with two wins and a clear shot at the 250SX East Region Championship. For a moment at the 2017 Las Vegas finale, Smith appeared headed to the crown while championship rivals Joey Savatgy and Zach Osborne were down. Then Smith crashed huge, ending his night and his championship bid. He was a contender again in 2018 and won another race, but Osborne got the best of the field again, topping Smith by eight points in the final rankings. This year Smith was keeping pressure on a fleeing Forkner in the East until a crash led to a wrist injury that nagged him for the rest of the season. The hope is that a change of scenery will finally provide the boost to get Smith his first title.

I would like to take this opportunity to thank Troy, Tyler and everyone else involved with the Troy Lee Designs Red Bull KTM Race Team for their support the past three years. The Team took a chance on me three years ago and were behind me from the start. We put in countless hours testing, training and striving to succeed, but always having a good time. If it wasn’t making golf bets it was pulling crazy pranks on each other. They believed in me from day one and we worked well together! We were close to winning a championship in 2017 and finished a close 2nd in 2018. Things didn’t go our way in 2019, as I was plagued with injuries. I will never forget the great memories I’ve made with this crew, from my first Supercross win in 2017, backing it up the next weekend for my second Supercross win. We followed that up in 2018 with a win at the prestigious Daytona Supercross, and really thought we were on the way to the 2018 championship. It’s been a great three years and I wouldn’t trade it for anything. THANKS TEAM—and good luck in the future.

As for McAdoo, it’s been a tumultuous run, but he’s shown enough potential to get on the radar of several teams. He turned pro with Bullfrog Spas/SmarTop/MotoConcepts Honda, which normally doesn’t run a 250 team but wanted to help the hard-working McAdoo make the transition. GEICO Honda soon needed a replacement rider and came calling, and McAdoo competed with that squad in 2017 and 2018. The team didn’t have a spot for 2019, so McAdoo was close to signing with Trader’s Racing, until GEICO offered yet another fill-in slot for supercross. McAdoo took it and finally logged a breakthrough ride at the Dave Coombs Sr. East/West Showdown in Las Vegas, where he finished third. Right after that, his supercross-only deal with GEICO deal expired, but a month later it was Troy Lee Designs/Red Bull KTM that came calling with a replacement ride (ironically, Smith was one of the team riders dealing with injury).

McAdoo rode well for Troy Lee Designs/Red Bull KTM, starting with seventh overall in his debut for the squad at the High Point National. However, he made the move to Monster Energy/Pro Circuit Kawasaki for 2020, now a much more established player than he was an underdog out of the amateurs a few years ago.

I want to give a huge thank you to TK and the @tld_raceteam for reaching out, and making my summer of racing possible. We gave our all every weekend together, and the entire team worked their butts off every day to give me the best equipment possible to perform on! Thank you guys!

“We have a great team for the 2020 season,” said Mitch Payton, Pro Circuit owner. “It is a great balance of veterans, combined with youth and new talent to our team, and we will provide all the necessary tools to help them reach their full potential. The Monster Energy/Pro Circuit/Kawasaki team has high expectations and I know they will all perform their best each weekend.”

Smith and McAdoo aren’t the only riders moving on from the Troy Lee Designs team. Stalwart Shane McElrath is moving to Monster Energy/Star Racing Yamaha. McElrath, who was essentially “discovered” by the Troy Lee Designs/Red Bull KTM team and manager Tyler Keefe, also took to Instagram to look back on the years together.

Ask any wise man the importance of influence on the late teen and early 20’s age group. 7 years I’ve been alongside TLD as a team and as a brand, and the impact that all the people I’ve got to work alongside with leaves me forever grateful for that time. There are too many people to tag, and too many photos to choose from, but everyone on the team, everyone who works at TLD HQ as well as TLD global, man I love you guys. God has been so good to us and to get to work alongside you guys has shaped me as a young man, has shaped my career, as well as my future. There will always be a place in my heart for all of you guys and thank you for being a brand that never settles and always wants to provide “For the world’s fastest racers.” Peace and wheelies ❤️

We’re excited to announce that @shanemcelrath_ has joined the Monster Energy/Star Racing/Yamaha Team for 2020 and beyond. With multiple Supercross and National wins to his credit, McElrath is hoping to earn his first championship on blue! | #starracingyamaha #sx #supercross

“Big changes for me this offseason, which brings a lot of excitement and motivation,” said Hampshire in a statement. "Everyone’s been awesome and I’m very impressed with the Husqvarna FC 250, the bike seems to fit my riding style well and I am very thankful for this opportunity! The expectations are high for myself and the team, we are looking forward to this fresh start!”

Hampshire announced he was leaving the GEICO Honda team earlier in this off-season.