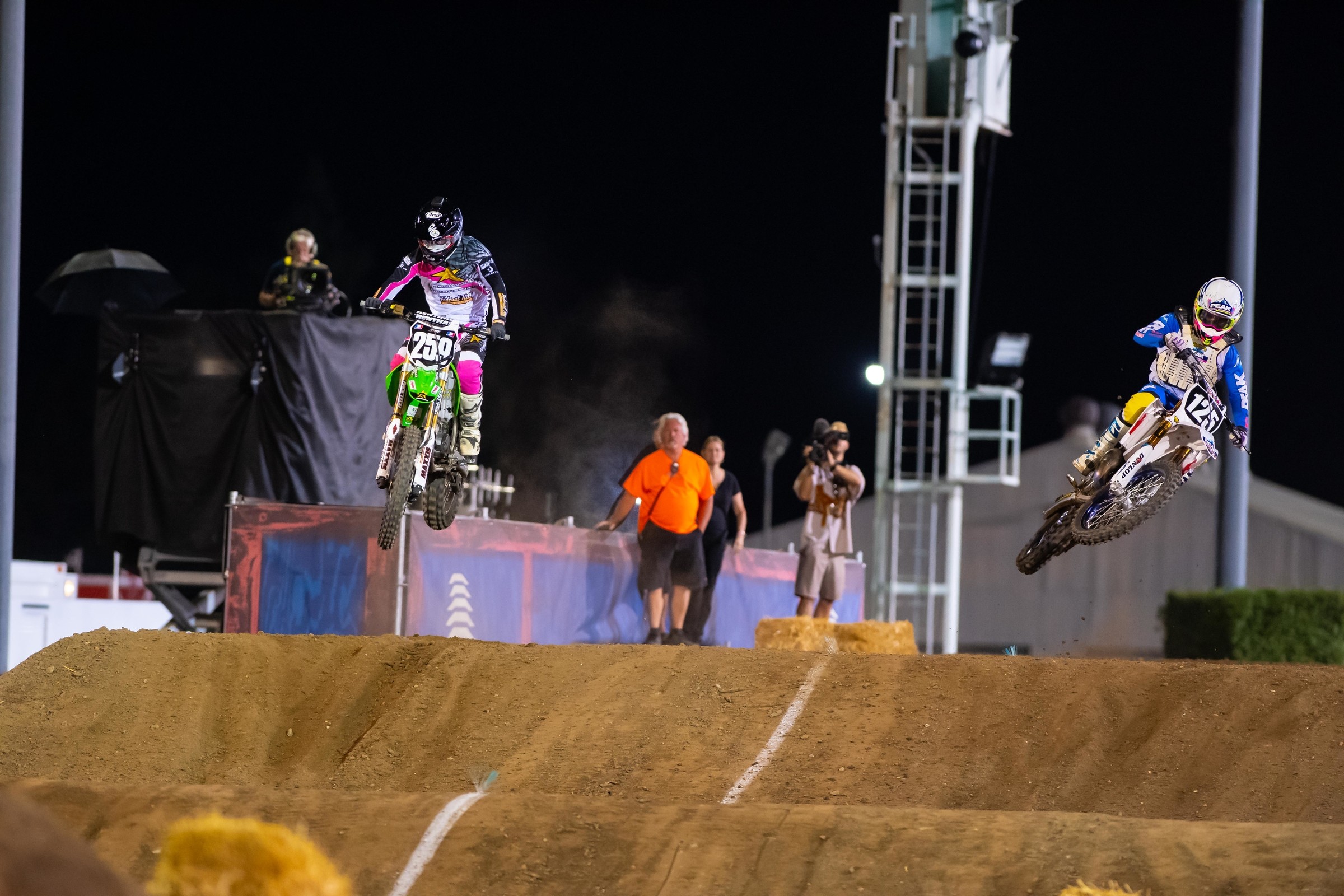 A race has a lot of gimmicks when the original concept, which was completely and totally original itself, has fallen to about fifth on the depth chart of wild ideas. Red Bull Straight Rhythm, you might remember, started with just one hook, a supercross track without turns. That was it. Jumps, whoops and walls, no turns. That was the crazy part.

Now, that’s old news. The track is just a side note. The race without turns made a turn of its own when it started welcoming odd-ball bikes, including the electric Alta RedShift, and Ronnie Mac on a Honda, er, Screaming Eagle, 250 two-stroke. Then more two-strokes showed up, as did big-name retired riders coming out of retirement to race them. Ryan Villopoto really stamped that one when he showed up on a KX250, got beat by Jared “Stank Dog” Steinke, and then smiled bigger after losing to “Stank” than he did while winning a supercross championship. This race was officially different!

We saw the concept last year when Villopoto rode a white Yamaha, and the 125 class featured an epic battle between 1991 Jeremy McGrath and 2002 James Stewart, er, actually Luke Renzland and AJ Catanzaro in costume. This year? It’s become a damned Halloween party. Here’s The List on the looks for the weekend, and you can look at the entry list and fill out your own head-to-head bracket.

Now, onto the retro looks!

Ryan Villopoto: His Yamaha will run a theme similar to Jeremy McGrath’s 2002 Bud Light Yamaha. But, instead of Bud Light, RV will be backed by Villo-Light. And we hear he may even have some cans of it in the pits.

Ken Roczen: Not a retro-themed bike but an actual retro bike. Kenny will ride Jeremy McGrath’s 2006 Honda CR250R. MC pulled the holeshot on this bike at the 2006 Phoenix Supercross, did a Nac-Nac, and led a lap. Last lap ever led in a supercross main on a two stroke.

Finally put up an update video on my Youtube channel for the CR250! Link in bio

AJ Catanzaro: “The Cat” has a new costume. Last year he had the 2002 “Bubba” look (the main image for this post), now he’s a Travis Pastrana 2001 look alike. Like, really, really look alike. Check this out!

Mitchell Harrison: The KX125 Catanzaro rode with Stewart numbers and logos last year has been transformed into a late-90’s Ricky Carmichael looking KX125. Harrison will be at the controls.

Simon Lagenfelder: This kid rode for Germany at the Motocross of Nations over the weekend. He’ll race SR this Saturday on a bike themed to look like Ryan Hughes 2003 Red Bull KTM 125SX.

Even better: could we get a Jerry Robin vs. AJ Catanzaro as well as a Grant Langston vs. Travis Pastrana battle? The real Langston and the real Pastrana will be at the event so the goal is to get them into the RedBullTV announcer’s booth together if this happens.

Jeff Walker: The popular privateer continues the early 1990s KTM theme with a bike we hear might look like our own David Pingree’s from back in the day.

Michael Leib: Inside scoop: Michael runs Canvas MX, a company that makes custom gear that can basically look like whatever you want. Canvas is responsible for a lot of the custom throw-back gear you’ll see at Straight Rhythm. Hey, why shouldn’t Leib himself get in on the action? He’s themed as Ernesto Fonseca from his Yamaha of Troy days.

Alexander Nagy: Another Yamaha of Troy look, as Nagy will have a Yamaha styled like Stephane Roncada’s 2000 YZ125. Nagy is backed by PulpMX for this one—Steve Matthes loves him some BluCru.

Ryan Sipes: “Mr. Do It All” will of course compete here. His bike is supposed to carry some mid-90’s KTM vibes, which means white plastic.

Max Vohland: This one is obvious. Maximus will ride a KTM but it’s all styled to look like his dad, Tallon, from back in the 1990s. So expect a ’99 FMF Honda vibe.

RBSR will also feature a 500cc Challenge race pitting Tyler Bowers on his KX500, which he calls “The Unit,” against Travis Pastrana and the RM-Zilla 500. The RM-Zilla will have some of that old Suzuki Yellow Magic livery, complete with those crazy splashes Suzuki used to put on the number plates. Travis’ gear will be styled by Kenny Stafford, who was the designer of AXO’s amazing stuff from its 90s glory days. Just don’t get confused when Catanzaro, dressed as Pastrana, looks more like Travis than Travis himself!