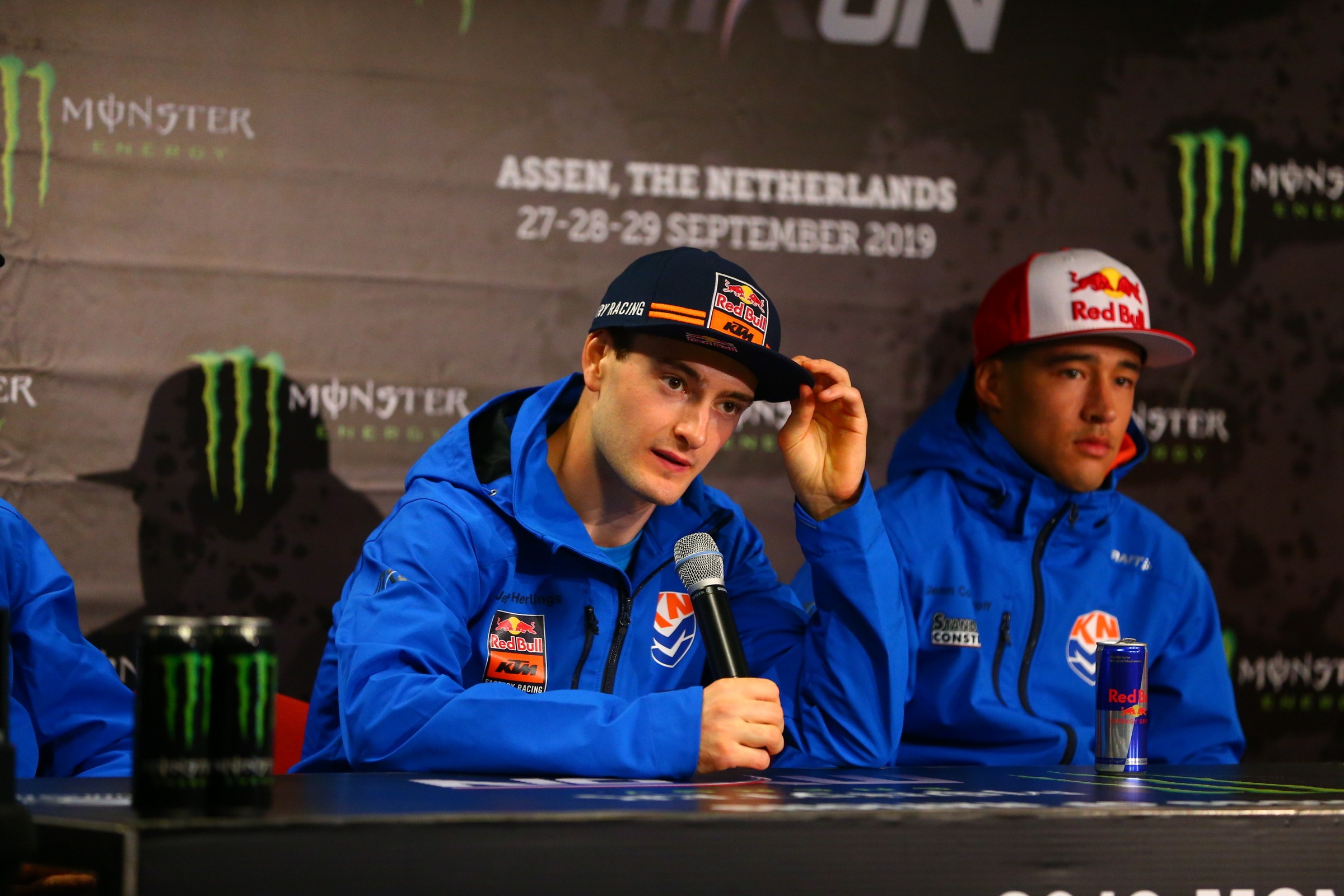 While most will focus on the battle for the team championship, MXGP fans will also have an eye on young Spaniard Jorge Prado, who will make his debut on a 450 at this event. The now two-time MX2 World Champion will jump to the MXGP (450) ranks in 2020 alongside fellow Red Bull KTM riders Tony Cairoli and Jeffrey Herlings. Much has been said about Prado’s prowess, and some even think the 18-year-old could win a moto outright this weekend on his new bike. Spain is not likely to figure into the team championship, but Prado will certainly draw some attention.

The Champ Is Here

While the Prado/Herlings/Cairoli dynamic will steal many of the headlines heading into 2020, the fact is that none of those riders are the MXGP Champion right now. Honda HRC’s Tim Gajser is the 2019 MXGP FIM Motocross World Champion. Like Prado, he probably won’t be a factor in the team portion of the event, as his native Slovenia isn’t a powerhouse (the nation didn’t even field a team at last year’s event). No reason “Tiga” shouldn’t be fast at this event, plus, he’s due for a ‘Nations breakout.

Team France has won this event five years running, and this despite dealing with plenty of adversity with injuries through the years. Whatever three riders France throws out there gets the job done. However, this year may be the tallest order yet, with Romain Febvre out with an injury, and then MX2 star Tom Vialle dismissed from the team over a…sponsor logo dispute. Jordi Tixier filled in for Febvre last year at RedBud, he was not spectacular but did enough for his team to win. As for Renaux, he's young, but did say in the Friday morning press conference that he's from the North of France, and is comfortable in sand and rain, and there's a chance both will be key elements to master this weekend. Can he and MX2 fill-in Maxime Renaux deliver under pressure? "This year I'm coming in with a little more experience and I'm more comfortable on the bike," said Tixier, comparing his last-minute position on the team last year. "I've put in some good motos with my teammates lately, so let's get out there and enjoy it."

One rider France can always count on is Gautier Paulin, who has been part of all five Team France wins during this streak, and actually every Motocross of Nations since 2009. He even won a moto back then, ten years ago! Paulin always rises to the occasion at this race. If he’s having a good year in the GPs, he’s a threat to win a moto at this race. Even in a bad year, he’ll still step it up here and battle for podiums (he went 2-3 in his motos last year at RedBud). France is without stars like Febvre, Vialle and Marvin Musquin, but history has proven that as long as they have Paulin, they have a shot.

The TT Circuit is actually one of the most iconic venues in motorsports, called “The Cathedral” in MotoGP road racing circles. Yes, this is a road racing track with a temporary motocross track built on top of it. These hybrid-style motocross tracks don’t have elevation change or natural terrain, so they often don’t work out so well. Assen has something going for it, though, and that’s the infamous Dutch sand hauled it to build the track. It might not be a traditional motocross track, but it will be rough and challenging, that’s for sure.

Motocross of Nations was always big, but it’s taken on rock concert status over the decades, and now the fans are absolutely insane no matter where the event is held. That often results in a big boost for home-team riders, such as when Team France rallied under thunderous support on home soil in 2015. It didn’t work for the Americans last year, though! With The Netherlands’ own MXoN team perhaps stronger than ever, expect this weekend’s massive crowd to have a lot to cheer for.

Technically, this is a home race for the Dutch, but expect thousands of those motocross-mad Belgian fans to cross the border to pull for their boys. The Belgian team has been zapped by injuries lately (Clement Desalle, its biggest star, is out with a broken leg), but, like France, this team just knows how to handle this event. Never count out Belgium at the Motocross of Nations!

Yes, that Dutch team. This country has never won this race before, recently taking three-straight second place finishes to France. That includes losing by a single point in 2016. They’re ready this year. Injuries destroyed Jeffrey Herlings’ MXGP season, but he’s back on form at the right time, winning the last two MXGP races of the championship (Turkey and then the finale in China). "It's be a season to forget, and really quickly," said Herlings at the Friday press conference. "We've been injured most of the season but we came back pretty strong and managed to win the last two GPs. The ultimate goal was since I broke my ankle was to try to shine here in Assen, that was the only thing I had left this year I could do, and we've never won it before. To do it in our home country, that would be a dream come true. I'm trying to take off some of the pressure so it's not all on me--we have a strong team and a great atmosphere. I'm feeling great."

In the sand, Herlings is practically unbeatable. Glenn Coldenhoff is a sand master as well, and is also riding better than ever, going 3-1-1-2-2 in the last five MXGP rounds. He also went 1-1 at RedBud last year. Finally, South African, um, no, The Netherland’s Calvin Vlaanderen is a solid MX2 contender, hitting around a 50 percent podium rate since returning at mid-season from injury. On paper, there’s literally no way this team doesn’t win. Will it play out this way when the gate drops?

Everyone knows you can’t find sand like Dutch sand in the United States, which is why this year’s event is so imposing to Team USA. After last year’s embarrassing performance at RedBud, though, this year’s riders are determined to put their best foot forward. Jason Anderson and his #TeamFried buddies have changed the game by viewing the month between the AMA calendar and the MXoN not as a chore but as an opportunity. Anderson got in lots of sand laps, as did his Rockstar Energy Husqvarna teammate Zach Osborne, who is no stranger to Europe.

"It's been a long trip and a lot of heavy effort in the sand, which is by no means easy," said Osborne. "It's nice to be here in a position where we feel we're as ready as we can be, a position where no matter how it goes on Sunday we can feel like we gave it all we can give it."

As for Cooper, today he said, "I started with some really tough sand tracks in California, honesty they were so hard to ride I could barely even do that many laps at first," he said. "I've seen a bunch of riders since we came over to the tracks here in Europe. I definitely learned we're at a big power disadvantage in the sand with the 250! Also, the European riders definitely have unique styles and it's cool to be able to pick up on things from them."

Thanks to the hospitality of the Husqvarna and Yamaha MXGP teams, Anderson, Osborne and Cooper are well-prepped for this year’s event, and determined to give themselves the best possible odds of doing well.

Still, even a well-prepped Team USA is not considered the favorite this year, not against a loaded Dutch squad. Injuries, though, have weakened many other teams, and Team USA’s all-in trio of Anderson, Osborne, and Justin Cooper are at least podium contenders. A podium contender is just a few crazy racing breaks away from winning the whole thing. For so many years, Team USA was an overwhelming favorite dealing with massive pressure at this event. Expectations from the outside are much lower now. Can the underdog mentality get Team USA to the top?

There really isn’t another team race in motocross, certainly nothing like this. To that end, strategy plays a role, starting with gate selection. Teams get two gate picks per moto. Do they put their 250 guy on the inside gate to give him a chance, or put a 450 on the inside and hope for a holeshot? How will they balance speed versus consistency? Part of Team France’s five-year win streak goes well beyond going fast. The team has functioned as a unit, which doesn’t make a difference in most individual motocross races but absolutely plays a factor here. The math, the strategy, the format—what makes this race unique is also what makes it so cool.