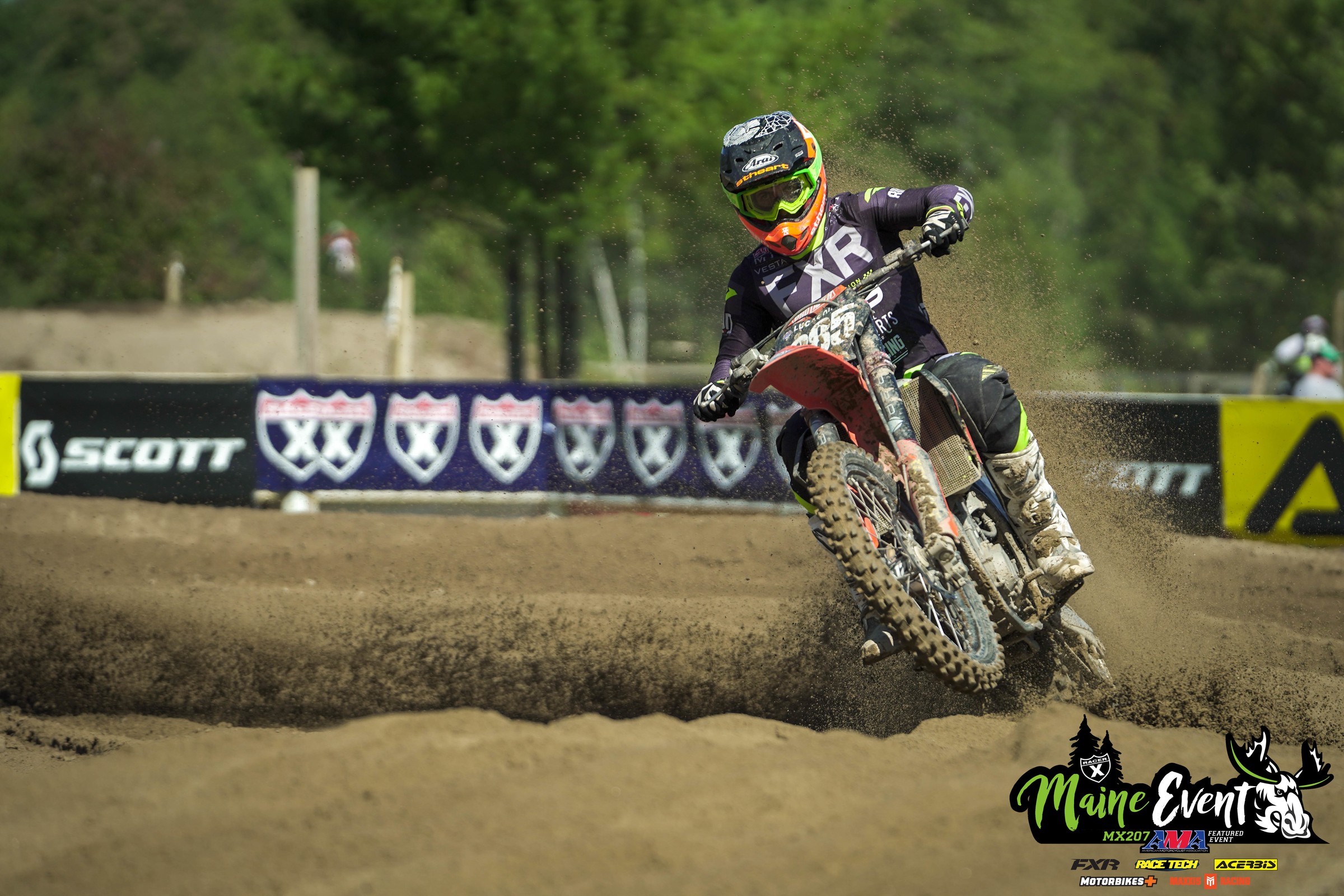 We checked in with Live It Extreme/FXR privateer Marshal Weltin a few weeks ago after he rolled to 450 moto wins at the Baja Brawl in Michigan. Since then he won some Pro-Am Motos at RedBud and dominated the A classes at the Racer X Maine Event. This week, he’s driving to Pennsylvania’s Pleasure Valley Raceway for the Travis Pastrana Pro Challenge. We think it’s awesome that Weltin is living the old-school bounty hunter life, living out of his van on weekends and earning as much purse money as he can find.

He has to now that he’s back in the U.S. For a few years, Weltin had rides in Europe and competed in the EMX250 series. He’s spent plenty of days training on the famous sand tracks around the Netherlands/Belgium border, and even raced at the TT Circuit of Assen, host of this weekend’s Motocross of Nations, once.

We rang him up while he was on the road to Pennsylvania to get his thoughts.

Racer X: How’s the journey been going? Last time we interviewed you it was after Baja Brawl. Then you did RedBud and then Racer X Maine Event. How’d that go?
Marshal Weltin: I did the RedBud Pro-Am and then went up to Maine. It’s been pretty decent. I have a little win streak right now. I think I’m fifteen moto wins in a row since Baja. Just gaining a little confidence in these local races, trying to make some cash. This weekend I’m going to Pennsylvania for the Travis Pastrana Pro Challenge, that should be fun. Maine Event was sweet. Enjoyed it. Got to meet Davey [Coombs], which was awesome. Everything went to plan. Showed up in my van and just slept at the track. Loved it. Bummed a few showers off a couple guys and just made it work.

You really did that? You slept in the van and everything?
Hell yeah. I got a little bed that pulls down. I just sleep in the van.

How has the driving been? I didn’t know if you could make your way all the way back here to Carolina, but you did. That’s a lot of miles, dude.
Yeah. I’ve been spacing it out. I’m not really doing too much during the week, so it’s easy to kind of plan my trips and stuff. I went back to Michigan for a little while. I hung out with the fam. Then turned it around and ended up just making my way down to Charlotte. I’ve just been planning my life around these local races. It’s been fun. I feel kind of worthless just sitting there during the week, but I’m always staying busy now. Working out, cleaning my stuff, prepping, training. There’s always little stuff that’s going wrong you got to fix. I’ve been my own mechanic, so you’re always running into things. I blew out a spoke and put a hole in my brake line. Just stupid stuff, always.

Are you doing the driving by yourself too?
Oh yeah. I got no one to do it with.

Where’s this mysterious brother of yours? Where did he come in? All of a sudden we were running photos that we thought were you, and turns out it was your brother!
I have two brothers. Mysterious brother that you’re probably thinking of is Roman. Roman goes to Ferris State full-time. That’s a university up in Northern Michigan. He’s in his fourth year right now finishing college. So when he gets a chance to come and meet me on the weekend or whatever he’ll get off class and hurry up and come and help me. He rides quite a bit too. He made Loretta’s this year in the 250 B class. He’s just going to college. So when it fits into his schedule and the stars align, we always try to meet up and ride together. Obviously when I’m down in Charlotte and driving to Pennsylvania there was really no way to meet up and make things happen.

Give me the intel on Assen. You lived and raced in Europe for a while and you’ve actually raced this track. What is it like from your opinion? I’ve heard it’s not deep like Lommel. It’s different, or it’s better, or it’s easier. What do you think of Assen?
I think Assen is more difficult, personally, than Lommel. Just racing both of them, Assen is more of a beach sand track that’s really unorthodox and it’s really difficult to find the flow. You feel really limited on the track. Whether the track length is the same, or the width of the track is the same, it feels more narrow. You can’t arc as much if you turn because when you look off to the side of the track you see grass and asphalt, where on a track like Lommel or a normal track, it has the normal scenery where it just looks like dirt. For some reason it messes with your eyes a little bit when you just look off to the side and you just see grass. It’s a man-made track at a road racing facility, lots of pavement and buildings around. It makes it feel like you have tunnel vision in a little sense. As far as the sand, I just couldn’t believe how soft Assen was. It just felt so bottomless. Lommel is bottomless, but at least you can kind of send it off some of the bumps and try to get over some of the rougher parts. In Assen it just felt like bump, bump, bump, everywhere. No rhythm.

You’re saying it actually felt rougher?
Well, Assen is 100 percent softer than Lommel. There’s no doubt about that. They have to groom the jump faces almost every race because they get deep to the point you can’t even ride through them. So, because it’s so soft, it can get rougher in a way.

Do you have the classic American story when you went over there where, during the week riding at Lommel, you think you’re going fast, and then some dude you never heard of goes blowing by? I heard that from every rider. Do you have stories like that?
Yeah. It didn’t help for me that I was on a pretty crappy team at the beginning of the year and it really made me look bad. I was riding a bone stock 250F for the majority of the first half of the season. I learned a lot about testing and setting up a bike for sand. I’d say the bike is huge, especially when you’re riding sand. You have to be literally a higher fork position, and be on the back of the bike to where the front is staying lighter and not getting stuck in the sand. The feeling of the bike really makes things easier.

So there’s sand in Michigan. You ride these days at ClubMX, which is definitely not hard pack. But are those European sand tracks still different from anything you have done before? Or had you seen something similar in the United States?
No. I’ve never seen anything like Europe sand in the USA. It’s just so deep. It feels like it just keeps getting deeper and deeper in Europe, where here you get more of a base and it turns into chop and you just get a lot more bumps. I feel like the holes just get a lot deeper in Europe and everything is amplified.

Did you get better? Is this something you learned in your time over there?
I think it made me a better rider. Those sand skills, it’s like a tool that I added to my bag a little bit, to where I can put it to use in certain situations or even just be a better rider in general. I think riding in the sand makes you better with how you grip the bike and ride with your toes. It really works for any situation, really.

The Team USA guys went over early and they’ve been riding for like a month. Can you pick up a lot in that amount of time?
I’d say if you get around three or four weeks, you can really start to pick it up. The hardest part is getting through that part. They’ve been there that long so that helps. All that time seeing how other people ride, seeing their lap times, how they set up their bikes. I think they’ll be pretty well-adapted for the race. But still, the [riders from] the Netherlands, they’re freaking animals. It’s unbelievable how fast they go, they’re just so gnarly in those conditions, doing long motos at that speed. So it’s going to help but it’s still going to be really tough.