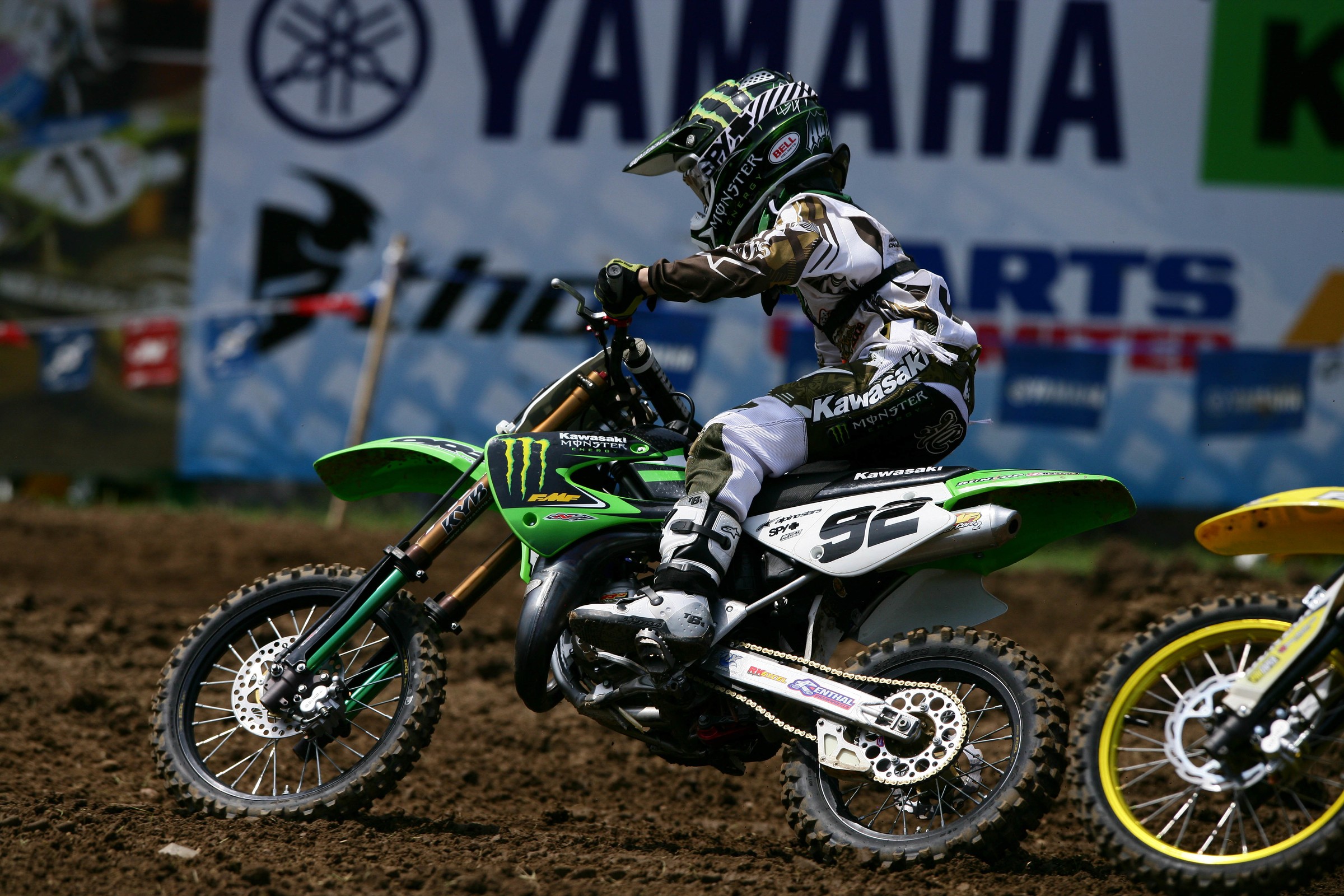 If you're a SX/MX fan like we are, getting your first look at next year's numbers is one of the best days of the off-season. It's a preview of what's to come, as well as a chance to rate where guys are, be it on their way up or on their way down. Of course some of that has changed with the concept of career-numbers for champions as well as top points earners (if you are top-ten in overall points in a season you get to select a career number), but it's still interesting.

The AMA released the official top 100 list of career pro numbers for 2020 AMA-sanctioned events (Monster Energy AMA Supercross and the Lucas Oil AMA Pro Motocross Championship). Take a look at who will have what number for 2020.

Here’s some of the highlights:

Webb, the 2019 Monster Energy AMA Supercross 450SX Champion, will defend his first title in the premier class in 2020. He will return to his career number, #2, for the Lucas Oil AMA Pro Motocross Championship.

If Ferrandis races in the 250SX West Region in 2020 (which we expect him to), he will defend his first American title with the #1W on his bike in 2020. He will return to his new career number, #14, for the Lucas Oil AMA Pro Motocross Championship.

If Sexton races in the 250SX East Region in 2020, he will defend his first title with the #1E on his bike in 2020. He will return to his career number, #23, for the Lucas Oil AMA Pro Motocross Championship.

Note: Should either Ferrandis or Sexton race the coast/region they didn’t win in last year, they will have to wear their career number, not the #1 region plate.

The three-time premier class champion will once again don the #1 plate on his KX450.

Cianciarulo will officially drop the 2 and become AC9, as the 22-year-old selected #9 as his new career number for 2020 and beyond. AMA National Champions (450SX, 250 Class and 450 Class of Pro Motocross) get to select single-digit career numbers.

By choosing #9 as his new career number, Cianciarulo puts the number back on the track for the first time since 2013 when it belonged to multi-time champion Ivan Tedesco. The hero image for this post is to Adam, pour one out for AC92!

The least used single-digit number of the last ten years? #8. It once again was not chosen by a major title winner (Cianciarulo) and has not been used since it belonged to Grant Langston, now the NBC color commentator for Lucas Oil Pro Motocross.

New class. New number. New chapter. Growing up I always felt single digit numbers were iconic—and I couldn’t pass up this opportunity. 92 will always be close to my heart and I look at 9 as an extension of that. Thank you guys for all the love. I’m so stoked! @gopro

Cole Seely, who announced his retirement from professional racing earlier this summer, elected to release his career number, and Ferrandis, one of the top eligible candidates, snagged it as his new career number. We could see Ferrandis rep the new number in supercross (as mentioned above) but we will probably have to wait until the Lucas Oil AMA Pro Motocross Championship.

Hampshire, who confirmed his departure from the GEICO Honda team following the conclusion of the 2019 season, will have both new colors and a new number next year as he moves to his career number for 2020.

Thirty-two won’t be a new number for Cooper in 2020 but it will become his career number.

After a slow-ish start to the year, Mosiman picked it up by the end of supercross and kept the ball rolling in the Lucas Oil AMA Pro Motocross Championship. His number is the second lowest non-career number for 2020.

After a strong year for each Hartranft and Hayes, the Cycle Trader/Rock River Yamaha teammates both dropped their numbers for next year. Ironically, Hayes’ number for 2020 will be his teammate’s old number.

Noren dropped back out of the triple digits as he will become #31 in 2020.

Lawrence finished tenth in the Lucas Oil AMA Pro Motocross Championship, his first championship in America and will move #outofthetripledigits.

After finishing 11th in the Lucas Oil AMA Pro Motocross Championship, his first professional season, the #936 will be no more. #outofthetripledigits Also, Ty, the AMA 250 Pro Motocross Rookie of the Year, and his older brother Jake (#78) are one of the three pairs of brothers with top-100 AMA rankings this year. The two other sets of siblings with top-100 numbers are Jeremy Martin (#6) and Alex Martin (#26) and then Hunter Lawrence (#35) and Jett Lawrence (#83).

Other: Finally, there's #47. In the history of AMA Supercross/Pro Motocross numbers, no rider has ever won an outdoor national or a supercross main event in either class wearing #47. It is the lowest number with such a distinction. So who will the pressure be on to break that long dry run for #47 in 2020? It will be on the bikes of Lorenzo Lucurcio. Good luck, LL #47!

Here's a cool one: Our contributor and part-time racer Blake Wharton was #93 in 2019, and he will again be #93 in 2020, should he decide to make some more cameo AMA Supercross appearances.

Finally, Ryan Dungey's old #5 is not on hold; it just wasn't chosen for the second year in a row.

when (or if) they show

Martin is recovering from a back injury suffered at the 2018 Tennessee National but is expected to be fully healthy come the 2020 championship.

I’m BACK!!! It’s been one year 52 days baby and ohhh this @fchonda feels good. Thank you to all the people that helped make this happen.

After a gnarly crash at the Paris Supercross, Peick was unable to make a race in 2019. Our Steve Matthes caught up with Peick in June and while he has been back on the bike, he hasn’t announced what his plans are for 2020. His number was saved for 2020.

Tickle is suspended until February of 2020 but is still able to keep his number.

Davalos hasn’t announced a 450 deal yet but hasn’t announced retirement either so if he races it will be in the 450 class (he’s pointed out of the 250 class). On a side note, he and his wife recently had their first child, Leo Maddox Davalos, so congrats to the Davalos family!

LEO MADDOX DAVALOS ? 9/9/19 Perfection is an understatement we are so in love and so blessed. This is truly a miracle to my life. Momma and baby are healthy and we couldn’t ask for anything else. @jodi_davalos ?????

Let’s look a little deeper into Davalos’ career trajectory. In 2006 he turned pro and earned enough points to rate #45 for 2007, but instead he was granted permission to run #577 instead. He kept that number for four years, then began running the assigned number he got from the AMA each season. In 2020 the veteran will be #37. So how is he doing, career-wise? Well, we added up all of the numbers he's received over the years, and then divided then by the number of years for an average of all of his seasons. That number turned out to be 41.142 so, technically, he had an above average year, despite being hurt!

Looking back at 2007, the first year that Davalos was assigned a number, there are several other veterans that, like him, are still racing on the AMA circuit. Chad Reed was career #22, and he remains that. Mike Alessi was career #800, but not anymore. Back in '07 Josh Grant was #24, Kyle Chisholm was #47, Ryan Sipes was #53, Broc Tickle was #75, Zach Osborne was #78.

Craig is serving a suspension until March 9, 2020, for an anti-doping test from the 2018 Daytona Supercross.

One of our first takeaways from the 2020 numbers is the fact that should Mike Alessi compete in an AMA SX/MX in 2020, it will mark the first time since he turned pro in 2004 that he will not wear #800. Alessi lost his career number due to inactivity on the AMA circuit, which allowed his special exemption to be grandfathered in and keep the number to expire. Alessi did not race between March 25, 2017, and March 2, 2019, almost two full years. When he did return this spring as a replacement rider for Bullfrog Spas/SmarTop/MotoConcepts Honda, he earned enough points for #76 in 2020. While we don’t believe Alessi has any plans to race AMA Supercross again in 2020, if he does, he’ll be a two-digit guy for the first time.

If “Mr. Versatility” races—which I wouldn’t put it past him after his all-encompassing 2019—he will be required to ride this number. Sipes didn’t earn a two-digit number last year but his strong supercross performances at the Daytona and Nashville got him back in this time.

2020 Top 100 and Career Pro Numbers for Supercross and Motocross