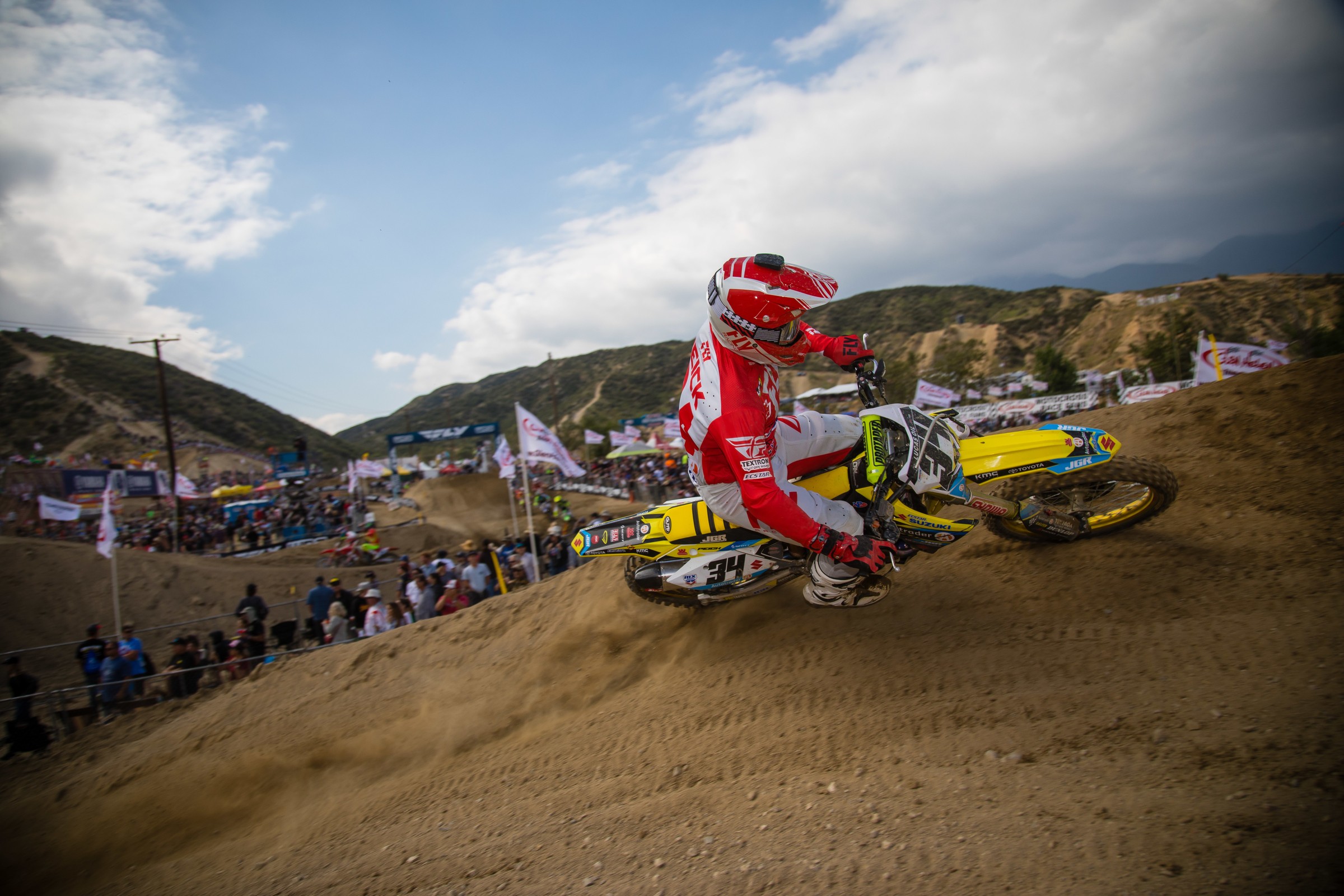 450 Words Weston Peick On His Recovery

JGRMX/Yoshimura Suzuki Factory Racing’s Weston Peick is still around, still trying to recover from a bad crash at the Paris SX this past fall. After getting landed on by another rider, the impact left him with some serious issues. Although most of his complications from the crash have been fixed by the different surgeries, he still has vision issues in one eye and he has been unable to race since sustaining the injuries.

We talked to Weston last Monday on the PulpMX Show to get an update on how his recovery has been going and what the future holds.

Racer X: How is the recovery coming? How are we doing, Weston?
Weston Peick: It’s going. My eye has kind of taken a slow-down on progression. It’s just one of those things now it’s going to take its course and it’s going to take a long time to come around. I don’t know how long it’s going to take. I really don’t know. I have no answers, because I can’t get an answer from the doctor or anything about when it’s going to get better or what the timeframe is. I’m just trying to improvise and stay busy and do what I can for the team and all my other sponsors. Just trying to stay busy.

Are you pretty depressed about this thing, or are you angrier about having to answer it from all these idiots like me that keep asking you about it?
No, I’m not depressed. Obviously, I’ve had my moments months ago, but now it’s life. Shit happens. It’s the people that sit there and dwell on it and cry on it that don’t move on and don’t move forward that end up falling apart. I’m not one of those people. I’m still training. I’m still doing what I need to do to if my eyesight does get better come back. Until then I’m just positive and thinking forward and doing what I can do, as much as I can.

You’ve obviously come to grips. This could be it for you. You may never race professionally again.
Yeah, exactly. There’s obviously a lot of things that have gone through my mind like that. Like I said, I just don’t know. You never know. This could be it, but I’m going to give myself at least a full year from injury to give it that opinion. If it’s been a year and my eyesight hasn’t gotten any better from where it was at, then obviously it’s time to call it a day and call it a career-ending wonderful injury.

How about the storm you caused when you jumped back on a bike?
I was going to stick with it that it wasn’t me. Nobody really all summer, besides that photo that [Josh] Mosiman [from Motocross Action Magazine] I think caught me. I could have played it off. I like dicking with people. People wouldn’t expect it to be me other than the bike and the gear, but really it could have been anybody. I could have let my practice bike mechanic ride my bike. I could have let my friend ride my bike. Nobody really knows if it was me.

How was it riding? What was it like? You can see a little bit in your eye I guess, or a little bit of movement. Was it really bad, or was it okay?
That’s a tough one. It was pretty hard at first just because getting used to obviously riding again and then obviously being a little bit timid. The hardest thing actually was judging the landing of the jumps and then judging my line choice and braking bumps. My depth perception isn’t there yet. It’s getting better, but it’s not like 100 percent. So it would mess with me, my depth perception. Coming into a turn, I would be going too fast into the turn and I couldn’t tell how close it was. At Milestone when I was riding, the dirt is a different color, so it would screw me up with the dirt color. When I would land, I would think I was landing before I was landing, so I would get loose on the bike. I would get ready to land and then I wasn’t really landing. Then I would let loose, and then all of a sudden, I landed. Just different things that kind of took a bit to get used to, but if I kept riding, I would have been fine. It’s something that you can get used to. The other thing that really screws me up the most is the vision that I have out of my right eye is just enough to interfere with my left eye. So my right eye vision is my bad eye. The sight that I see out of my right eye, it overlays in my good eye.

What I’m seeing perfectly clear out of my left eye is 20/20, but my right is not that good, so that’s pushing it into my good eye. So if I’m looking directly at someone’s face talking to them, my right eye is showing my left eye what’s to the right of me, and it’s not synced with my good eye. So it throws me off when I’m doing stuff. If I were to literally just put a patch over my eye and ride, I probably would be really good. I just wouldn't be able to see out of the peripheral if someone was to the right of me. My eye doctor was going to give me a contact lens that’s just blocked out in the pupil so that I could do activities and not have that issue.

At the end of the day of riding, did it make you happy? Were you stoked? Or were you frustrated?
I was both. I was frustrated and happy that I could ride. It’s like, yeah, I was able to ride, but could I ride like I can? Hell no. Obviously only riding three or four times isn’t make or break. If I took six months off from an injury and came back, I’d feel the same way. You just kind of have to ride in order to really see how it would work. That’s just kind of how it was. Obviously since I just had this last surgery, I’m still trying to take time to recoup from this last surgery. That’s why I hopped back on the bike again.

I know you’ve been working on something off the track. Do you want to talk about it at all, or is that still for another time?
It’s kind of more or less going to be exposed here pretty soon. Some people know. I started a new business with my neighbor. It’s totally opposite of what people really actually think. People are like, you’re starting a gym. I’m like, no. That’s a terrible, saturated market where every single corner has a stupid-ass cross-fit gym that I want nothing to do with. We have something, it’s not new, it’s something new for me that’s given me nothing but gray hair just trying to find out a solution to run it since I’m a dirt bike rider and I’ve never run a business before. I own a business. I actually already own a vape shop, me and my dad, but I don’t care to have ties with that branding, but just in the beginning I helped support it, I funded some of it with my dad. But that’s all I did with that. This new business is more or less hands-on because I have nothing to do right now. So I’m learning the whole side of the business aspect. Then just ordering stuff, ordering restocking stuff and business permits. The whole nine yards that I’ve never done before. So it’s something new. I’ll probably release some information to a bulk amount of people soon, not just the few that know what I’m going to be doing in the next month or so once our grand opening kicks off and all that stuff.

How much do you talk to J-Bone [team manager Jeremy Albrecht] and the guys on the team? Are you into it every day and asking them and joking on them in group text and this kind of stuff? Or are you kind of staying away because it makes you want to ride?
I do as much as I can. I try to help out the riders as much as I can. Some of them come to me for help just because I’ve done it for so long. I’m trying to help out [Justin] Hill actually right now at the moment with just kind of getting him back on track and pretty much just getting his head in the right direction and not elsewhere.