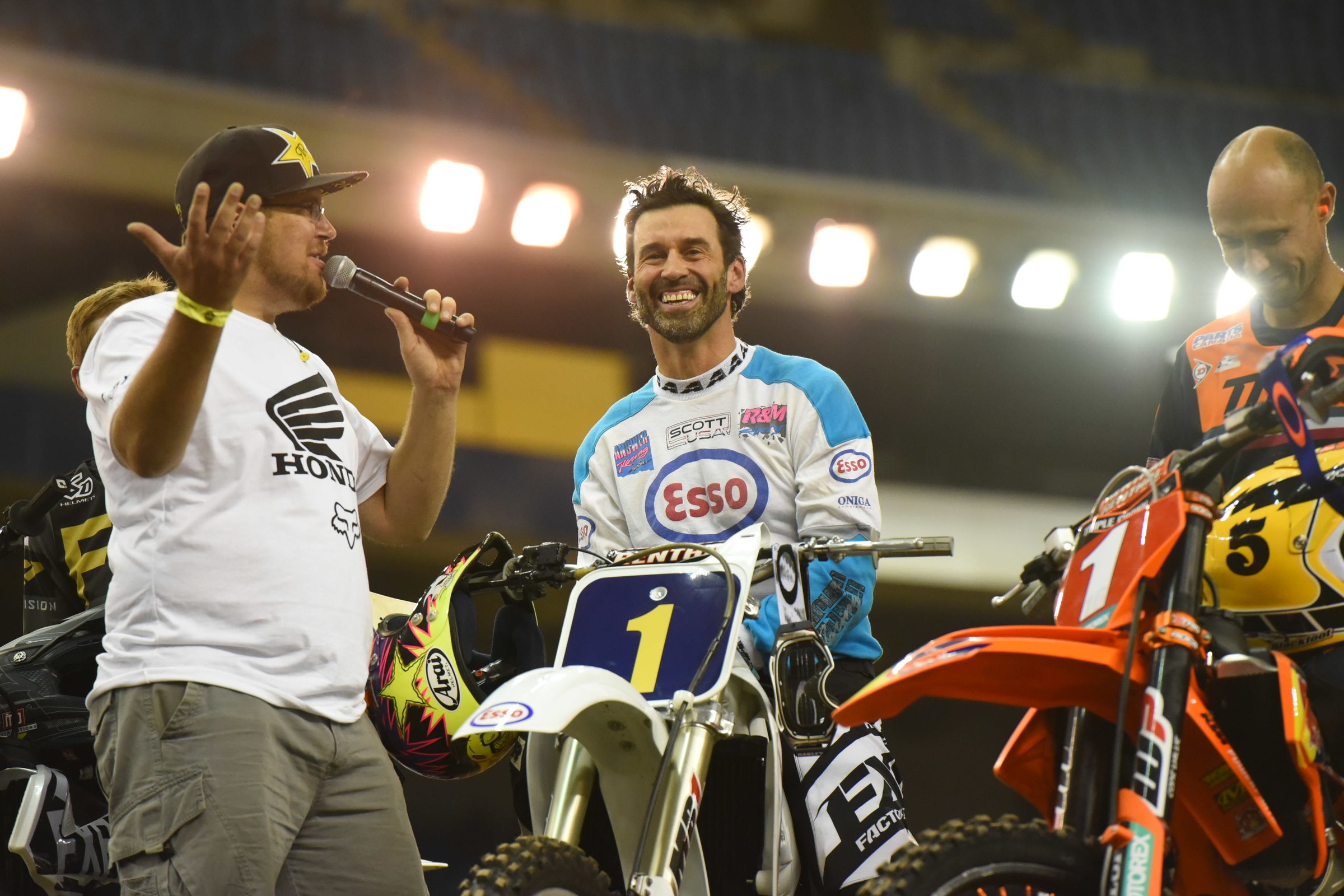 Where Are Carl Vaillancourt

One thing the new iteration of the Montreal SX is missing is the fast French Canadian racer. With Kaven Benoit retiring there just isn’t that one Canadian guy t to pack the stadium and get the fans to freaking. Jean Sebastian Roy was that guy before Benoit and before JSR, it was Carl Vaillancourt. Carl had a great career on both sides of the border with titles and wins in Canada and many, many top tens in the USA. He, along with JSR, Serge Gregoire, and some other French Canadian moto legends were honored in Montreal so I caught up to Carl to find out what’s new and talk some moto.

Racer X: Great to be back here in Montreal, a place where the fans loved you. They love the French Canadian riders. What’s it like coming back?
Carl Vaillancourt: It’s cool. A few weeks ago JSR sent me an email saying, “You’re signed up. We’re doing the legend thing. You’ve got to show up Saturday night, September 14th.” So I showed up and Ben Milo had built me my 125 that he found a few years back, my CR125 with a Mugen Honda motor. He found it. I thought he was kidding. He spent a lot of money, built it. It’s his. They said, “Why don’t you take the old bike back?” So for the fans here, how’d you like it? It seemed pretty cool.

Yeah, it was pretty cool. What was it like? Did it run okay?
Yeah, at first. It seized the last time. It exploded. I thought that they weren’t going to get the parts to fix it. I rode it today a little bit and they warmed it up this week. Actually as I rode the track, it wasn’t that bad. Slow, but still I thought it was going to blow up.

Montreal was gone for a couple of years. Good to be back, though?
This was the biggest event for so many years. 65,000 people when I was there so many years. I hope it’s going to get back to that level. I think we need a Quebec star. We need Kevin Benoit to hang on for a little bit. There’s some kids coming up. But the show is as good, if not better, than what it was when we were racing. The three Americans [Dean Wilson, Malcolm Stewart, and Justin Brayton] were smoking the track. It’s [the crowd] is better than last year. I think it’s a little better. They told me. So I’m hoping it’s going to be back to the best motocross event in Canada.

What’s your favorite memory from here?
Ninety-four there was a Canadian final. I won it. That was pretty cool.

Was that 125 or 250?
Two-fifty. They made a Canadian final because we never won an international final. Then in ’90 I came in five seconds from [Dean] Matson. I was second. There was always a lot of fast Americans, so they made those Canadian finals which was cool.

You know who did win here? Ross "Rollerball" Pederson.
I know he did.

You had a great career. One of the only guys to beat “Rollerball” straight up. Not too many Canadians did that. You packed it in pretty early while you were still very competitive. That was long time ago, but do you regret that? You should have kept going?
Sometimes I do. Twenty-five, I had just turned 26 when I retired. Today I’m really happy because I went back to college and got a finance degree. We run the business and it helped me. I could have gone to 32 or 33. I still follow it. I follow you. I follow everybody. It’s awesome.

You strike me as a fan. You’re still right into it.
All the time. I’m right into this stuff more and more and I love it. I think it was the right path for me. My dad helped me out a lot and the family business. My dad was like, “You guys are taking it on.” I’m in the business with my brother. My brother is five years older than me. He was already in it. He supported me a ton when we were racing. So the company helped me to get to a good level racing, so I sort of wanted to give back. Business is booming today. I’m happy.

You did quit when the money started going down a little bit too.
Exactly. That time from ’96 to ’99 when JSR was winning, it was dry. He was spending, spending. Good thing he made it up. The next few years he made some money.

Saw you at the Quebec [motocross] round. John Dowd and Keith Johnson raced. Mike Treadwell was hanging out. Those were your guys! The New England guys.
I was always with them in Florida. We traveled a lot. I used to go to Southwick a lot and do a New England race. They start early. They finish late. He’s always been my buddies. Too many good stories that we can’t even count, just a lot of fun. They got me to go last year to the New England vet championship. Did four or five lap races last year. So I’m just back riding. I got a bad elbow this year, but it was fun to be back riding. I’m not going to quit.

You had a lot of top tens in 125 supercross. A lot of main events. U.S. highlight for you—what was it in your career?
It’s a fifth in Atlanta 125, ’89. It was Stephenson, Bradshaw, Ty Davis, and Kiedrowski. I was fifth. That was pretty cool. I was 19. I also did a fifth in the open class, but I don’t think it was as competitive, so that [Atlanta] was my highlight in the US stuff.

What do you think about supercross now when you watch it?
I watch everything. Always U.S. supercross and outdoors every week, and I’m on MXGP, I watched mountain bike last week, I watch cycling. The guys are awesome. Those bikes are so fast. They’re doing one class, but they’re putting it on the line. It’s awesome. I don’t think they could do two classes at that level. The level of fitness since [Ricky] Carmichael days it seems to have gone up. These guys are awesome. So fast. It’s amazing.

Do you have a favorite Motocross des Nations for you?
I did go once in ’89 in Germany. I didn’t think you remembered. It was good. I got a 13th one moto. Of course Pederson had to be in the first row. So me in the second row. So I got 11th or 13th, right around there. Second moto was a 15th.

A lot of Americans may remember, you had an Esso sponsorship.
Esso and Texaco.

How’d that come together?
[Doug] Hoover got an Esso deal. Back then Jeff Glass had a surf deal and Chris Morgan up here in Canada had all these deals and stuff. So we started looking for outside sponsorship. We ended up wanting to compete, so I went to see Texaco. They were stoked. We got a good deal. Then eventually Imperial Esso oil bought Texaco. So I had to change color. [In] ’88 and ’89 Hoover quit and they went from Texaco to Esso.

When you think about it, we could use that today in our sport. That kind of sponsorship.
We could. The companies are putting a lot of money on the line. Outside sponsorship. You tell me [why it doesn’t happen]? I don’t know why.

It’s different. All we have is energy drinks.
They have TV and everything. It’s so good. The energy drinks, I can’t believe how much money they spend.

You look back, our sport is bigger than ever but back then we had Esso, Texaco, Camel, Surf, Mobil. We had more sponsors back then.
Back a while ago it was all cigarette sponsorship. Now it’s all sugary drink sponsorship. So it’s a switch. I don’t know how long it’s going to last. When the cigarettes got shut down by the governments it was gone. Let’s hope the energy drink will last longer.

Anything else going on?
Not much. Life is good. I’m busy. I work a lot. My kids are skiing. They keep us busy. Instead of going to racing we’re going skiing all over the world. My daughter is skiing on a provincial team. My son is on a national team. They’re keeping me busy.