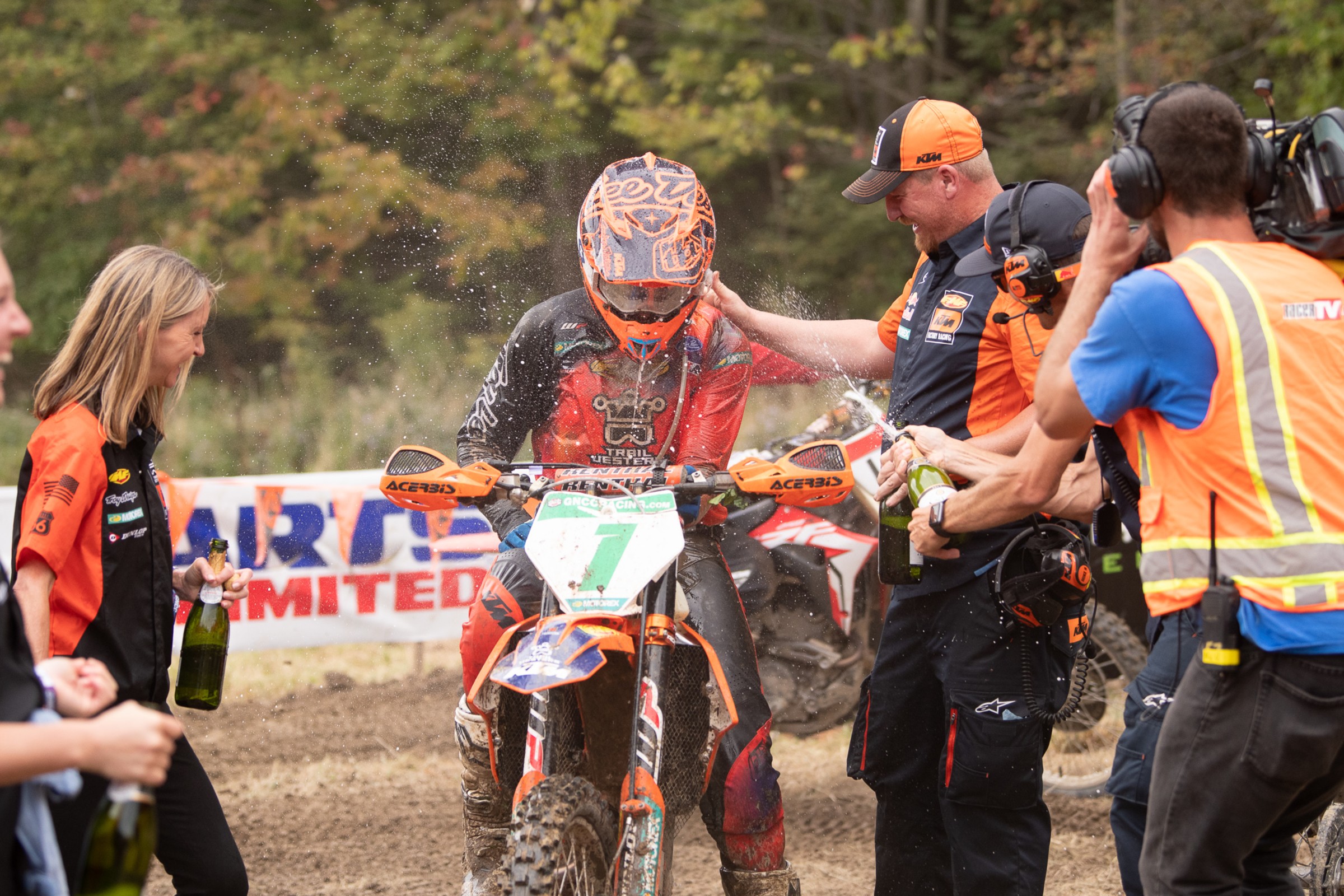 GNCC Report 5 Things We Learned at the Black Sky GNCC

The 2019 Amsoil Grand National Cross Country (GNCC) Racing season resumed this past weekend after what seemed like a long summer break. However, the break was a smidge shorter than what the racers are used to because this year's opening round was postponed, forcing a rescheduled event in early July. That shortened the break a tad. Nonetheless, the inaugural running of the Black Sky GNCC proved to be a welcomed addition to the GNCC schedule and provided some of the most exciting racing action of the season. Here’s what we learned.

Russell and Russell Rail Through Roots and Rocks

The majority of the day would see a battle for the lead shape up between two guys both with the last name Russell—although they are not related. Ricky Russell would grab the XC1 holeshot on his Am-Pro Yamaha and swap the lead several times with Kailub Russell. At the completion of the opening lap, it was actually Layne Michael crossing the finish line in the first place position but Ricky and Kailub would mount a charge and begin swapping that number one position several times throughout the three-hour race.

The course would see some of the driest conditions of the season, which lead to some choppy terrain in some areas while other areas held moisture in the ground making the copious amount of rocks and roots very slick, adding an unexpected challenge to those who were willing to charge hard. This made for a pretty demanding racecourse and those who were willing to charge had an advantage to keep the competition in sight. With Kailub Russell and Ricky Russell leading the pack, the battle was on for the rest of the top five as Thad Duvall, Steward Baylor, Jordan Ashburn, Trevor Bollinger, and Layne Michael all ran inside the top five at some point during the race.

On the final lap, it would be a three-rider battle with the two Russells dicing back and forth for the lead, while Duvall would charge hard up to just around four seconds behind the top two. As they entered the final field section on the last lap, Ricky Russell would emerge from the woods with the lead, but a small mistake by Ricky and a hard charge from Kailub would see Kailub Russell rocket his way to the lead.

Battling through the final corners, Kailub Russell would claim the win with Ricky Russell less than two second behind, and Duvall finishing another four seconds behind. After three hours, one minute, and 10 seconds of racing the entire top three would only be separated by around six seconds!

With the race win, Kailub Russell would claim his 60th GNCC overall win. He moved to the XC1 class in 2011, and won his first-ever GNCC overall win that season. Since then, he’s stepped up his training and has become a winning machine, ultimately claiming 60 wins in 99 XC1 starts. Kailub missed three rounds in 2015 after an knee injury at the International Six Days Enduro, and missed the final round of 2018 to undergo shoulder surgery after his crash at the Unadilla National.

With ten wins in ten rounds of racing, Ben Kelley has officially wrapped up the XC2 class title. He also inked a three-year extension with KTM that will see him step up from the KTM Supported Trail Jesters team to the FMF/KTM Factory Racing team beginning in 2020. The weekend at Black Sky proved to be a huge one for Kelley, who has come on incredibly strong in the past few seasons to establish himself as one of GNCC Racing’s premier riders.

Kelley made his first full-time bid at GNCC Racing in 2016 where he landed a pair of podiums and finished fifth in the XC2 class championship. He returned in 2017 with two more podium finishes, once again ending the season fifth place in the XC2 class. During the off-season, it’s as if Kelley flipped a switch and came into the 2018 season as a new man. He would win six of 12 rounds in 2018, and only finish off the podium one-time and in doing so, he would claim the XC2 class title.

In 2019, Kelley has more than backed up that performance with ten wins thus far and an early wrap on the XC2 title. The plan is for Kelley to stick with the XC2 class through the remainder of the 2019 season and vie for a perfect season, which has never been done before in the professional bike ranks of GNCC Racing. Walker Fowler once swept all 13 rounds in the XC2 ATV class, which is actually a Pro-Am class. However, on the bike side of things, nothing like this has ever happened and Kelley is on his way to making history.

Next season Kelley will be forced to the XC1 class. In GNCC Racing, once a rider claims an XC2 championship they are allowed to defend the championship the following season but then must move to the XC1 class regardless of finish. Much like the move to the 450 Class in the Lucas Oil AMA Pro Motocross Championship, there is definitely a learning curve when a rider makes the move but many are expecting Kelley to adjust better than anyone else ever has. Only one rider has ever claimed an XC1 class win in their rookie season out of the XC2 class, and that rider was Kailub Russell in 2011.

Flying Under The Radar

There were several riders who flew under the radar at this race, and actually put together very solid rides but just didn’t quite do it in a very flashy manner. In the XC2 class, Craig Delong led the opening lap and stayed within a few seconds of Kelley for the majority of the race. Kelley opened up a sizeable lead in the final hour of the race, but there’s no doubt that Delong’s second-place finish was hard fought. Meanwhile, Evan Smith and Jonathan Johnson were left battling back and forth for the final podium spot in the XC2 class. In the end, Smith would pull away from Johnson on the final lap to take the third place position, with Johnson fourth and Ryder Lafferty landing his fourth top five finish of the season.

Lafferty is the nephew of eight-time AMA National Enduro champion, Mike Lafferty and has been putting together more and more impressive performances over the past few seasons. Lafferty undoubtedly has the potential to run with the front of the pack, and once he figures out how to run the pace for the entire event, we very well could see Lafferty break the “Mike’s Nephew” stigma, and turn Mike into “Ryder’s Uncle.” Don’t worry Mike, guys like Jeff Russell and Scott Plessinger who eventually saw their next generation surpass even their own success. They will be there to support you!

Also impressive was XC1 competitor Andrew Delong. The Phoenix Honda rider suffered some issues on the opening lap, ultimately dropping him all the way back to around 84th overall. He would put on a charge beginning with the second lap and ultimately worked his way back to 14th overall and ninth in the XC1 class. While this isn’t exactly the finish he would strive for, Andrew actually ran some lap times competitive with the top five riders. 84th to 14th is no joke! He doesn’t know the meaning of “quit” and was riding very well. It’s just a matter of time until we see everything come together for the likeable Honda rider, and he could be gunning for top five finishes in the near future.

It’s Not Over, Until It’s Over

The first race back from summer break can almost feel like the first round of the season all over again. For some, it can be a disastrous start to the final four rounds of the season and for others it could be welcomed relief that your summer work paid off. However, this is just the first of four final rounds in 2019 season. You can’t base the end of the season off this one event.

With three rounds remaining in the 2019 season, championships are still on the line for the XC1 and XC3 classes. Anything can happen in the world of GNCC Racing, especially late in the season when everyone is focused on the ending goal.  These final rounds can be the most crucial ones of the season and often leads to exciting racing. If the Black Sky is any indication of what the final three rounds will hold, then these have the potential to be the best races of the entire 2019 season!