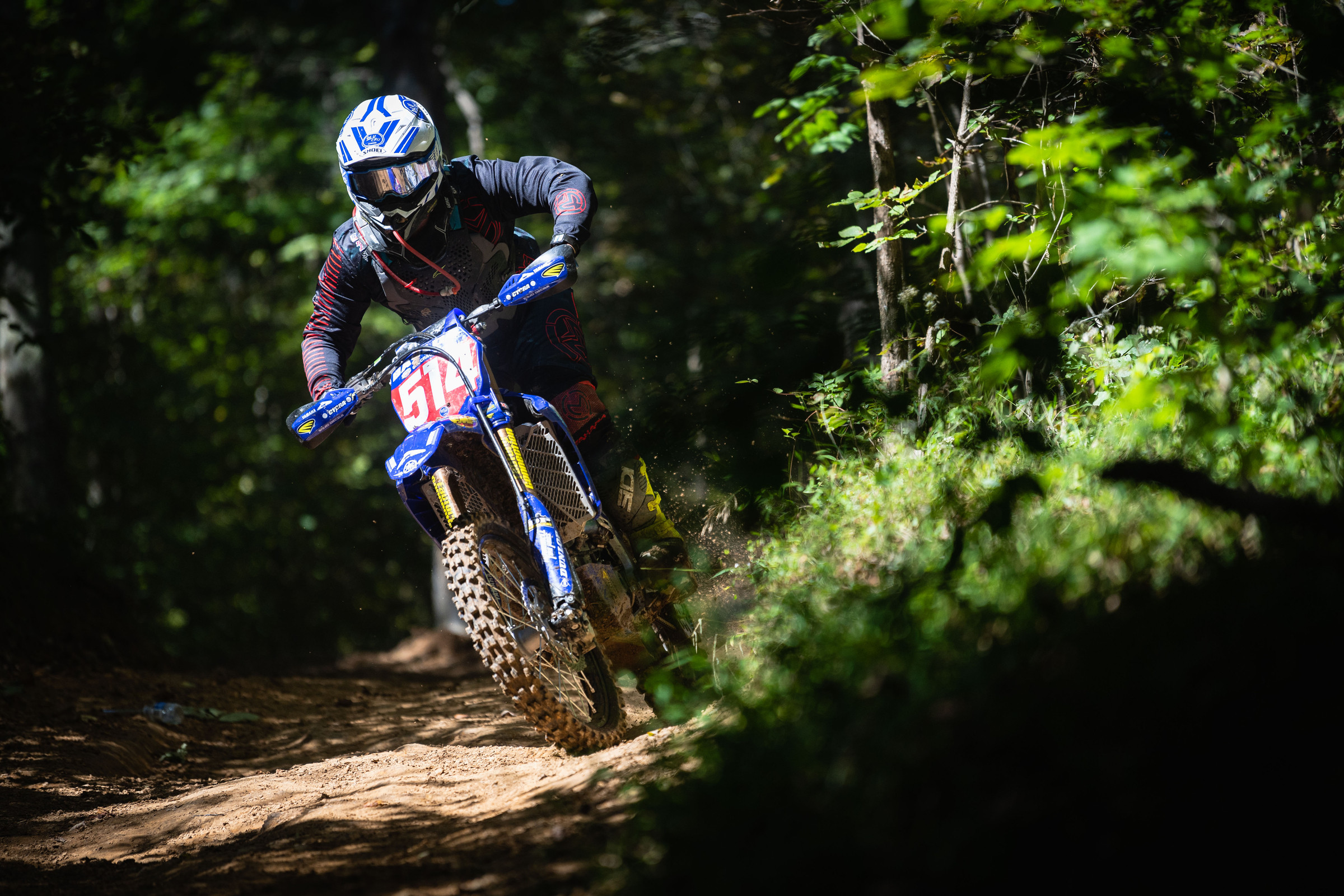 GNCC Report Things We Learned at the Burr Oak GNCC

Round 11 of the 2021 Grand National Cross Country (GNCC) Racing season would see a return to Ohio’s Sunday Creek Raceway, home of The John Penton GNCC. This event would be dubbed the “Burr Oak GNCC,” a nod to the original name of the event when it was added to the schedule in 1990. Since then, the name changed to The John Penton, but now that the track is hosting two events this year, the original name came back! Incredible track conditions and motivation in the hunt for the GNCC National Championship would help produce some of the most exciting and close race of the season. Here’s a few things we took away from this event…

COURSE CONDITIONS WERE NOTHING SHORT OF EPIC

This venue has a notorious reputation for being incredibly slick when it’s wet, and rains throughout the week leading up to the event had some in fear of those slick conditions. However, it had stayed fairly dry in the previous weeks which left the Ohio clay a bit hard. When the rains fell throughout the week, they were not torrential downpours, so water only sat on top of the ground or just ran straight off. Saturday’s ATV racers flung a lot of this mud off and hardpacked the majority of the course.

The GNCC track crew went to work Saturday night and ran the Sutter Trail Dozers around various portions of the course, pushing dirt back in and eliminating some of these hardpacked areas. By the time the 1 p.m. Pro bike race hit the track on Sunday, the dirt was tacky, the ruts were manageable, and it never seemed to get overly rough like some of the GNCC races tend to do. These epic conditions and a longer racecourse than usual dropped the bike race down to just five laps but still well over the three-hour mark, which still resulted in a long and grueling pro race.

The infamous John Penton Section was added into the course for the p.m. racers. It was definitely no cakewalk. The additional four-mile Penton Section saw an optional near-vertical hill climb, two incredibly steep downhills, several log crossings, miles of tight and technical single track, plus one fun grass track section thrown in as well. The John Penton Section is as old-school as it comes, and this one was arguably the best layout that section has ever seen.

Steward Baylor appeared to play it safe through much of the race. Each lap it seemed as if Stu sat just far enough behind the leaders to keep them in sight, but not overdo it and push himself too hard. Jordan Ashburn would grab the holeshot and lead most of the race. It wasn’t until the white flag flew that Ben Kelley would take over the lead with Ashburn in second and Baylor dropping back to third after completing the previous two laps in second place.

“It was a struggle,” said Baylor. “I didn’t really tell anybody, but the first race here, back in the Spring, first lap, I tore my meniscus. I’ve kind of been struggling with that since that day. Since that day was a repeat. Got inside of someone, started washing the front, and I felt that knee pop. I was like “Oh my God, there goes the knee again.” With a tear like that, your knee locks up and I couldn’t make it straight all day. I told the team I needed to pit right now, I need to pit on the first lap so someone else could actually take it and pop it loose. But we didn’t do it. I had to dig deep.”

Baylor would then put in a last lap charge to first pass Ashburn, and then Kelley crashed in the closing stages of the race, and Baylor snagged the win.

“Two to go I made a mistake on a log,” said Baylor. “Last lap I put some pressure on Ben, we were about two to three seconds apart and I saw him laying on the same log! [Laughs] I know he was cussing the log the same way I was. That’s racing. It was a fun day.”

When the checkered flag flew, it was Baylor crossing the finish line first for the race win. In true Steward Baylor fashion, his race winning celebratory loopout would be one for the ages as he flipped the bike hard enough for it to land on the handlebars, breaking them in the process. Baylor would draw a little social media heat from some folks who weren’t fans of the celebration, but also, again in true Steward Baylor fashion, he just brushed it off, dished back his own replies and is ready to move onto the next one.

Baylor’s race win would be good enough to give him the points lead in the hunt for the GNCC National Championship. With two rounds remaining, Baylor now sits just one point ahead of Ben Kelley which has the potential to make some incredibly tight racing through those final two events.

“I’m just pretty mad about today,” said Kelley. “I had a good jump off the line and pushed my way right into first early, then I had a crash. I was right there in the battle for first, everyone was going good. I got into second about halfway, I just washed the front end and got caught with a tree between my fender and front wheel. It wasn’t a hard crash, but when I got up the front end was tweaked. Normally I can just get up and ride it out and get used to it, but it was so bent up it was hard to ride those off cambers and ruts. I stopped for gas and they were able to kick my front wheel and we got it a little bit better. At that point I was mid pack but still within striking distance. I reeled them in, got into second, got into first, I was able to get a good enough gap, and then the last lap, in that Penton Section, just something stupid. I don’t even know what I hit—a root or whatever, a log. Just enough to knock me sideways, and I went over the bars and had to get my bike out of a tree. Stu went by me, and I got up but my shifter was sheered off, I was stuck in third gear. No excuses, I gave it up with my crashes. I feel like I’ve given it up two or three times this year. You can’t do that if you want to be a champion. So I’m mad at myself, but I’m not worried. We have two races left and I’m going to try to get the win. I’m sick of Stu getting those wins and showboating in front of me. I want to get those wins and rub it in his face! [Laughs] Hats off to those guys, they’re riding good.”

Baylor and Kelley are both former GNCC XC2 class champions, but both made their way into the XC1 class during Kailub Russell’s reign, thus neither of them has a GNCC National Championship to their credit. This means no matter what the outcome, a first-time champion will be crowned this season, and both of these guys have the drive and desire to do so.

“I knew if I won it was the points lead, but it’s just another day,” said Baylor. “I think a lot of these guys put too much pressure on themselves. I’ve been there. The last thing I want to do is say that if I win this championship it’s a life-changing event. It’s not. I love racing. If I’m second and he wins I’m still riding my dirt bike, so I’ll still have a smile on my face.”

“It’s crazy how stressful it is, I feel like I have so many people around me working so hard, and living through me,” said Kelly. “I know I can win, I can do it, I just keep letting them slip away. Best to him having that points lead. It’s heavy. We will see how he handles it.”

Baylor has been at the GNCC game since a kid. He came up through the GNCC Youth Ranks claiming a Youth Overall Championship, a 200 A class championship and an XC2 class championship. Kelley primarily raced in the New England area as a youth, and made his way into the GNCC series full-time in the XC2 class starting in 2016. Kelley claimed a pair of XC2 championships in 2018 and 2019, then even won just his second XC1 race after wrapping up that 2019 title.

While each of these riders come from different backgrounds, both are viewed as the next “big thing” to battle for numerous championships. The thing is, they can’t both win the championship. It’s going to be an exciting final two rounds.

Last season saw a three-rider battle for most of the XC2 championship. Unfortunately, that dropped to a two-rider battle in the final round after Johnny Girroir suffered a concussion at the penultimate round and was forced to miss that final event. It appears as if Girroir used that as motivation and has come out swinging throughout the entire 2021 season. With eight wins through 11 rounds, Girroir has been the man to beat this year.

With two rounds remaining, Girroir now holds a 44-point lead over 2020 champion Craig Delong with two rounds remaining. This means that Girroir just needs to finish inside the top five at the next race to wrap the title up. Of course, sometimes that’s easier said than done. While Girroir has a great record this season, anything can happen in GNCC Racing and even the smallest bike issue can hinder a rider’s results when you’re racing for three hours.

As for Delong, he rode to a solid second place finish at Burr Oak. Since there’s still a mathematical shot at the championship, Delong is simply doing what he can to stay as close as possible. However, he also has to be looking ahead to the future. In GNCC Racing, once a rider wins the XC2 class championship they are allowed to defend that title the next season. After that, they must move to the XC1 class regardless of if they win a second XC2 class title or not. The transition is tough, but Delong is another rider with many years of GNCC experience and is fully prepared to tackle what is thrown at him.