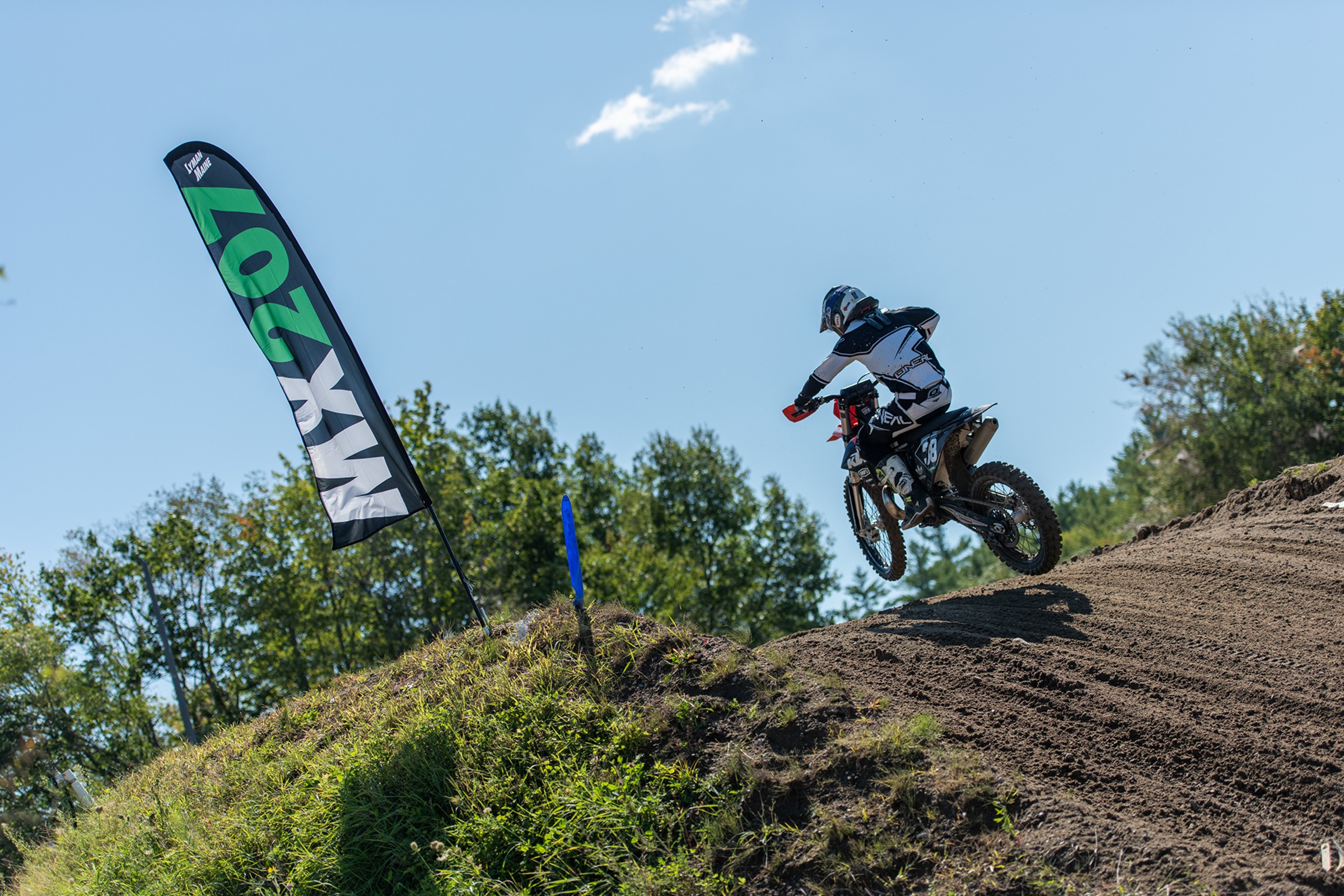 MX207’s 2019 Racer X Maine Event was one for the books. The gates opened and people from all over filled the pits for what would be the biggest edition of this race so far. It was an action-packed weekend including motocross, enduro-x, best whip, and FMX.

After practice wrapped up on Friday, the focus shifted toward the Mighty Moose Enduro-X under the lights. This was a new feature to the weekend and was pretty fun to watch. The Pro/Exp class was won by Cody Williams, followed by Andy Mathieu, and rounding out the podium was Josh Downs. It was an evening of spills and thrills under the lights, but the next morning it would be time for everyone to wake up with their race face on as Saturday would be the start of motocross racing.

Everyone’s prep was put to the test on Saturday. The MX207 track was fresh, and riders from all over were ready to line up. The stage had been set, and it was time to drop the gate and figure out who’s who around the East Coast. Riders came from as far South as Florida, and as far North as Prince Edward Island, Canada. There were tons of great battles and standout performances all throughout the day.

Saturday night it was time for the JBR Best Whip presented by Akavie CBD. With special guest Brett Cue making his way up to MX207, there was a lot of hype leading into this event. The lights were on, the fireworks were lit, and the riders were going huge. The contest was judged by Jordan Jarvis (who was unfortunately not able to race the weekend as the Women’s All-Star rider due to injuries sustained earlier in the week), Ryan Sipes, and last year’s winner David Hollinrake. The judges had their work cut out for them but were able to decide the top three. First would be Jesse Peirce, second Brett Cue, and third Kevin Hill.

On Sunday morning the sun rose and so did the competition. With the smell of race gas and bacon in the air, riders walked the re-groomed track to take another look at it before the event’s third day. The 250 C class took the track first, picking up from where Saturday left off in this three-moto format. The moisture steaming from the sunlit ground set the backdrop for early morning motocross and stacked competition. New England has always had a saying, “if you don’t like the weather ... just wait an hour” which couldn’t have been more true this weekend. Conditions ranged from a cool overcast day Saturday to a hot and sunny Sunday.

The variety didn’t stop with just the weather, as fans got to watch bar banging competition from classes like 51cc 4-8 all the way to the 50+ vet class. One of the best duels involved Red Bull KTM rider Ryan Sipes battling local star Justin Allen in the Aggressive Graphix 125cc two-stroke class. Sipes has been racing just about everything the last few years, and actually winning in quite a few disciplines. Allen gave  him a great run, but Sipes won it with 1-1-2 scores. This was a race we’ll be talking about for years to come, with the duo making tons of noise while ringing out their two strokes,  while the fans along the fence line matched that same volume.

"Hey, it was [fun,] and he [Allen] was pinning it out there," Sipes told Davey Coombs after the races. "I told him if he’d slow down three percent he would go faster. But maybe that’s what makes him so fast—he was not scared to send it! We raced together three motos, and the first two motos I really just out-smarted him, me just being a little older and knowing how to pick lines and all that kind of stuff. And that last moto, which he won, I’m not taking anything away from him—he was riding really good. I made a few runs on him but there weren’t a lot of lines out there and I just wasn’t able to make the pass, but I also knew that I could take second and still take the overall win, which I did. I really think Justin could be one to watch in the next few years—he’s got some real potential."

Cullin Park came all the way from Florida to take on MX207, and was in the midst of an unprecedented weekend. He had gone 11 for 11 with wins going into his 12th moto of the weekend. His winning streak was cut short at mid moto due to mechanical difficulties, leaving him with a DNF. However, despite the last moto DNF, he was still able to walk away with the 2019 Weekend Warrior award, after scoring the most points with his extremely dominating performance throughout the weekend. Park won all but one moto in the 250 B, 450 B, Open B and Schoolboy (12-17) B/C classes.

With $15,000 on the line, the EJP Pro Purse attracted a lot of fast guys to race the 250 and 450 A classes. Last year’s winner Chris Canning announced just days before the race that he was not going to be able to compete due to injuries. This left the door wide open for someone new. That somebody would be first timer to MX207; Marshal Welton. Welton was unstoppable, taking home the money-filled briefcases for both the 250 and 450 A class overall wins. Guys like Ryan Dowd, Aaron Lampi, Brian Borghesani, and Josh Clark were all making him work for it, but Weltin was on the gas and swept his way to the money.

With the weekend wrapped up, the number 1 AMA Featured Event plates were handed out, podium bottles were popped, and people went home with great memories. It was a great weekend, and we’re looking forward to another one in 2020! Go here for full results from the 2019 Racer X Maine Event.