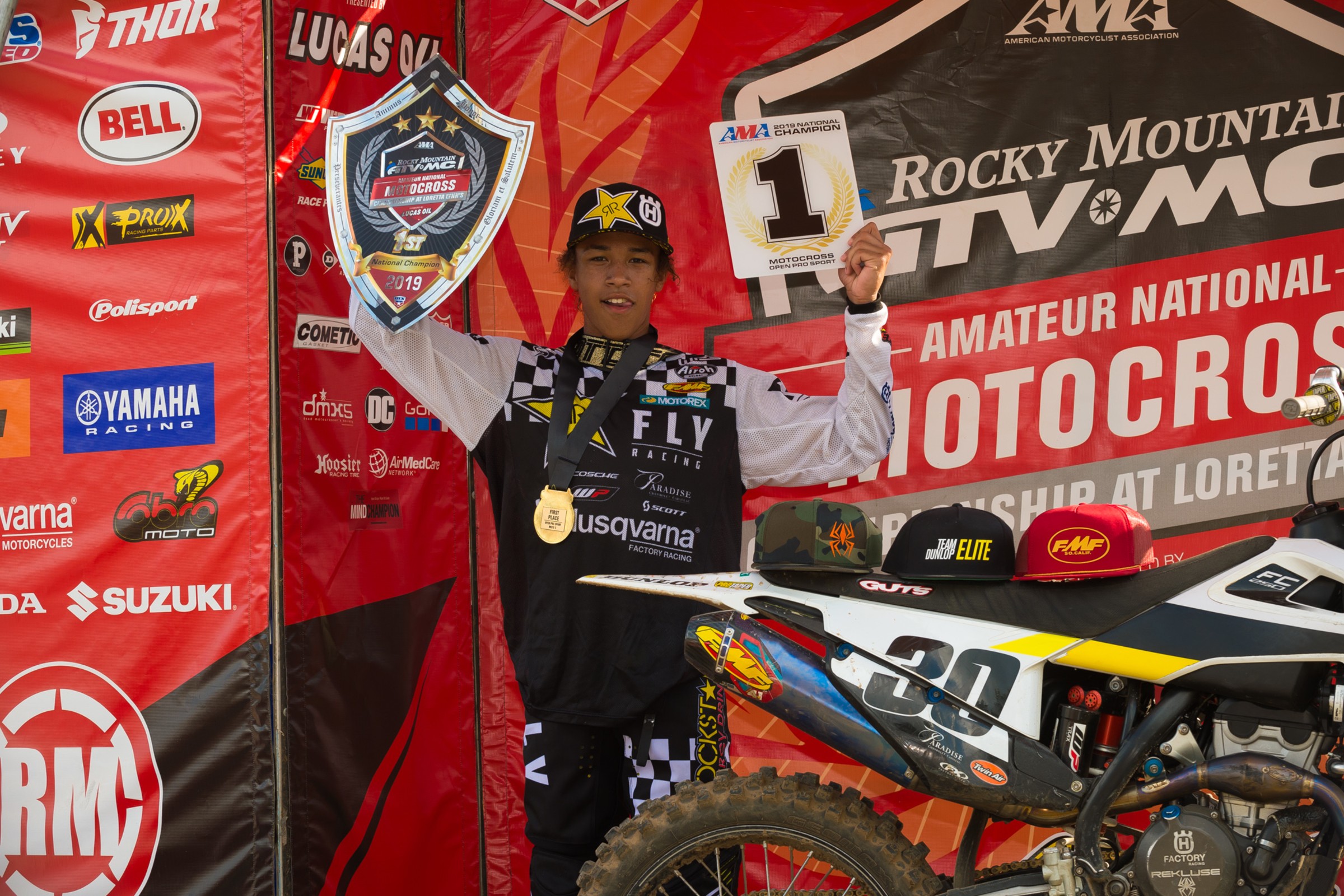 The expert-level classes at the Rocky Mountain ATV/MC AMA Amateur Motocross National at Loretta Lynn’s were extra-tough this year. For a long time, the event ran four different A classes, which spread talent around, but now there are just two divisions, 250 Pro Sport and Open Pro Sport, which guarantees all the fastest riders have to race each other.

Plus, this year was exceptionally packed with talent since no one came out early and turned pro at Hangtown (last year's top amateur at Loretta's, Derek Drake, actually waited until Hangtown this year to make his debut). Packing in all that talent led to wild battles and plenty of attrition over the course of six motos in two classes, making it difficult to find a clear favorite for the AMA Nicky Hayden Amateur Horizon Award. Titles in the two classes were split.

Rockstar Energy Husqvarna’s Jalek Swoll won the Open Pro Sport class with 1-3-1 scores, but he suffered a groin injury along the way and had to skip his final moto in 250 Pro Sport to try to save himself. Hardy Munoz won that 250 Pro Sport class by fighting his way to tough 3-4-3 finishes. Jett Lawrence opened a lot of eyes with some impressive rides, but his bike quit while leading the final 250 Pro Sport moto, leading to 1-2-DNF scores. In Open Pro Sport, Lawrence tried to chase Swoll down from a bad start in the final moto, but Swoll held tough to win the title.

It was a hotly-debated subject, but Swoll was presented the Horizon Award at closing ceremonies. At first, he didn’t show much appreciation, saying on stage that “He’s not that into awards so it’s whatever” but when we saw him afterwards, we asked if he would have been mad if he had not won the award. That’s when he realized this actually felt pretty good.

The Rockstar Energy Husqvarna rider is normally known for his consistency, but a mid-week groin injury put him into salvage mode at Loretta's. Next, he will race Unadilla this weekend in his professional debut. First, this interview.

Is it supercross also for you next year? These last few nationals and then supercross?
I’m not sure about the supercross deal yet. If everything goes as planned, I’ll probably be East Coast.

So this week, first of all, what did happen with that injury?
I think moto two of the 250 A or whatever, just coming through, I got the holeshot, good start. Everything was looking good. Come through the sand sweeper one lap and it kicks out just a little bit sideways. It was an awkward squeeze. I felt it right away when I got the bike back straight. I went back to the medical area and they took care of me back there. They said that it felt like a groin strain. So, I just kind of did exactly what they told me to do. I rested it. I put ice on it. Stuff like that. Just saved myself for the moto that I had a good overall in.

That wasn’t the moto where you fell while leading and then the bike didn’t restart? This was all separate?
No. That one was just all me. I don’t know what it was because I’m usually pretty good on the mental side and with nerves and stuff like that. I don’t want to say I had bad luck because you make your own luck, but just wrong place, wrong time, things were happening that don’t usually  happen.

Last year you were super consistent. You didn’t have those mistakes.
Yeah. That’s what I’m saying. It’s super unlike me. So, it was kind of a wake-up deal for me, actually. I thought it helped me more than it hurt me. It’s been a while since I’ve had stuff like that happen to me. So I think I needed it. Especially before going into the pros because I know I’m not going to go in just the top guy or anything like that. It’s going to be hard. I just need to be mentally prepared and focused to just put my head down in whatever place I am and go from there.

Speaking of that, what was the prep and what was your mindset going into that last moto a little bit hurt, and really needing to win it?
Honestly, it was pretty mentally draining because everything I did, it just felt like my groin just wasn’t helping. It hurt all the way around the track. It’s such a weird place to have a strain or anything like that because all the squeezing comes from there. It was painful but I wanted to put my head down and do the best I could because the Rockstar Husky boys, they put their heart out on the line for me, so I just wanted to do the same for them and it worked out in my favor. I thought about it, I’m going pro, and I know the big boys deal with way worse stuff than this so I had to just get through it.

What was the attitude from your team while you were trying to put the week back together? Did they want you to get back out there or not worry about it too much because you’re going pro anyway?
Well, actually that was a big surprise to me as well. The whole team backed me. Nobody really cared, honestly. They just wanted me to have fun. It’s my last dance here. They just wanted me to have fun and embrace it. There’s not too many people who can come out of Loretta’s with wins. So I’m very fortunate. I told my girlfriend I was content and happy with what I’ve done here, even if I did walk away with nothing. I’m good and I’m just ready for that next step.

Did it actually feel a little sweeter when you came across the line? It was a rough week, but you pulled it together.
Yeah. It actually felt like maybe one of my most important and best-feeling wins I’ve ever had, actually. I never had to deal with injuries, really. Honestly, knock on wood, I’ve been pretty good in the injury part of it and consistent and stuff like that. So this win felt great. Honestly better than any other win.

Just give me your background. How’d you hook up with Husky and Timmy Ferry and all these people that you’ve been with for a long time? How did that all start?
It actually started out with the Bell family. Trained with Zach and Chase down there in Cairo, Georgia, right by MTF [Millsaps Training Facility]. When I signed with Husky, Bobby Hewitt [Rockstar Husqvarna team manager] saw potential in me from superminis. It was actually crazy because the first moto Bobby saw me in was a moto just like my first one here where I fell three times in one moto! And he still gave me the contract! So from there, I knew those were the guys I wanted to stick with and they had my back. Bobby actually had the whole thing planned for me to go with “Red Dog” [Tim Ferry]. So I’m really thankful for that because “Red Dog” has been a huge help to me. I honestly think that’s where my mental side and consistency come from. But also, I’ve been getting a little bit more fiery being around him and not shying away from rubbing or anything like that. I’m ready or it all. I just got to thank “Red Dog” for all that.

Is Timmy still your guy?
Still my guy. I’m going to try to stay with “Red Dog” for my training. If it isn’t broke, don’t fix it, right?

Who do you ride with there? Who’s his guys right now? Are there any pros with him at the moment?
Not with him, but we all train at Sandbox. So we basically do ride with everybody, AC [Adam Cianciarulo], [Chase] Sexton, [Ken] Roczen, and a whole bunch of other guys come through there. So we have good talent there and it’s good for me because I get to chase their lap times and stuff like that and try to use it in my favor.