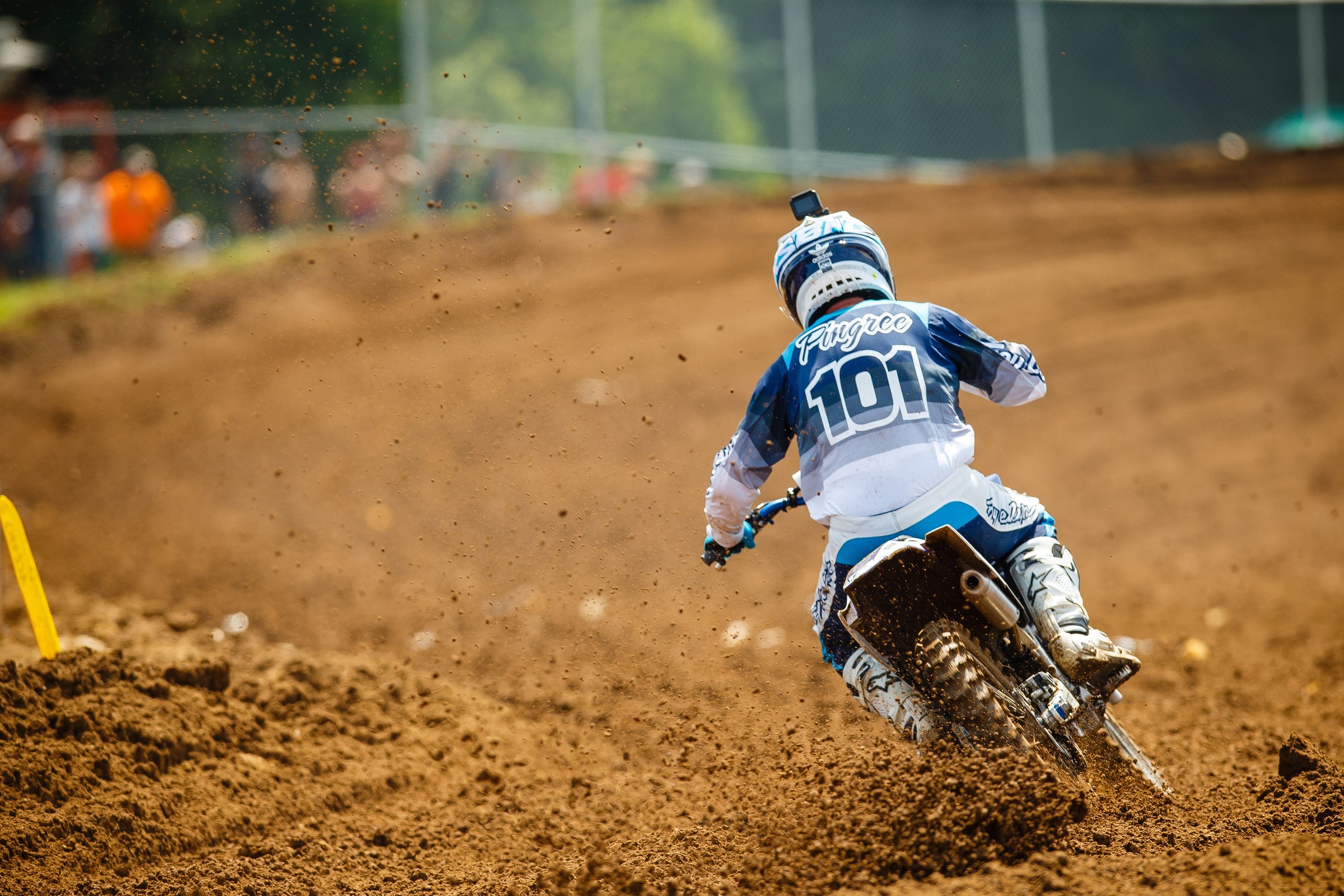 I have a ton of questions about amateur racing and Loretta Lynn’s. For example, can you ride a different bike at the national than what you qualified on—such as racing a 125 in the Schoolboy class at the area/regional and then a 250F at the national? Or even just ride a different brand of bike than what you qualified on? Also, why would someone disadvantage themselves by racing a 250 in the open classes? I’ve been watching the Open Pro Sport class and the factory connection guys are animals to qualify on that bike, let alone run up front on the 250, but seem to be just edged out by the 450 riders. I think I sometimes see it too when a limited bike races an unlimited class. Guys (and gals) racing at this level surely have multiple bikes.

Lastly, we see some disparity in the pro ranks between the factory riders and the privateers, but I can’t help but notice it too while watching the live stream at the Ranch. A guy like me would just be glad to show up with a bike, a set of tools and maybe a tire or two to any race on my own budget. But now you throw in the notion that some of these kids are drawing a paycheck to show up to this weeklong race with a mechanic and a truck full of parts provided by the manufacturers. How many of the other kids tweak their subframe the first moto and are basically nursing the bike the rest of the week? It seems a little lopsided and I guess a reason I root for the underdog. What do you think?

Thanks,
Too old and broke to do it anymore.

Really taking full advantage of “ask” Ping today, huh? That’s a lot of questions and, frankly, I don’t know the current AMA rulebook as it pertains to amateur racing. Apparently, you can still protest anybody you want and some sorry bastard put everybody in front of his kid on notice… in the 50cc class! What’s wrong with people?

I imagine you can ride whatever bike you want at the qualifiers and the national, as long as they are both legal machines in that specific class. I have no idea about the 250cc bike in the open class… I could see kids who just moved up and don’t yet ride a 450 taking advantage of this.

The question that piqued my interest was the one about factory amateur riders, and I think we’ve lost track of reality as it pertains to our sport. There are very specific rules in place for collegiate athletes getting paid, and our sport has gone the opposite direction. There are some families living off the wages their ten-year-old is making; what could possibly go wrong? I’ve spoken with Pro Circuit’s Mitch Payton, Troy Lee Designs/Red Bull KTM’s Tyler Keefe, and other managers about it and they all hate the way it is, but they have to play the game or lose every top amateur kid to the teams that are investing (gambling is a better term) on these pre-pubescent riders from the time they are toilet-trained. I’m not saying you can’t make it happen against the factory guys, but when you show up on a bike with an exhaust system and some race fuel, you’re showing up to a gun fight with a rubber knife. On the flip side, when a no-namer does beat those guys, it says a lot, and the team managers see that. Hopefully these teams will see there is a certain point where the juice is no longer worth the squeeze and they pull back their amateur budget a bit.

I've been fortunate enough to make it to the last two the Monster Energy FIM Motocross of Nations races in the USA. Both very different experiences but equally special. I read Racer X daily and read about Team USA needing to think outside the box when it comes to selecting the 2019 MXoN team. Well, here is my suggestion... Pick Mike Alessi!

Crazy right? Or is it? Mike completely destroyed the field up in Canada at Gopher Dunes a few weeks ago on a world renown sand track built on flat ground that resembles the Assen track. I also saw Mike this past weekend in Riverglade on a completely different track where he again pulled both holeshots and won both motos. Both wins came in extreme heat and humidity, and yes there was world class talent on the line with him. He's got a capable bike and I would like to think at this point in his career he would be honored to get the call and give it 100 percent. He will even have the extra time to prep beforehand. What's the worst that can happen? He pulls both holeshots and drops a few positions?  It's better than starting in the back of the pack and not being able to push forward like some of the other rider options (no disrespect) have already proven over the last few years. Get this to “The Man.”

Thanks,
Dan from Canada

I’m sitting over here trying to decide if you’re a total lunatic or the smartest man on the planet. With our top guys opting out, sometimes the best thing you can do is send a guy who will put his heart and soul into the experience. In this case, Alessi could be a really great pick. Full disclosure: I haven’t seen him race outdoors in a while, but he has been having some great rides recently. If he were able to pull some holeshots in the Assen sand he could probably hang on for some good finishes. Tony would make sure he had all the support he and the boys need and we could even buy Jeff a ticket and give him a few new laser pointers in case we needed help in the last moto. Dan, you might have just helped the US get back on top. Cheers

I will spare you all of compliments that you obviously hear on the daily from all of your adoring fans and get straight to the point.

Growing up in the mid-90s and going to AMA supercross and national events, I always wondered what happened to the riders gear that they wore for that particular race? I saw loads of kids asking for goggles, jerseys, gloves, and even overheard one kid ask for Doug Henry's helmet, but what happens to the gear that is not given away? I'm assuming that you get two or three sets of gear on a race day delivered to you by the gear rep. and when all is said and done, do you get to keep the gear? Do you have to take it home and wash it and return it at the next race?

Please, Mr. Ping, let me in on the secret of where all that cool gear goes. Thanks, and I want to say that you and GL are killing it with The Whiskey Throttle Show and I just watched the one with the Mike "The Rock" LaRocco from RedBud and it was swell!

Thanks for your time,
Crazy Canuck

It goes plenty of different directions. Most of these guys are getting hit up every weekend for jerseys, so many of them go to sponsors, friends or fans. Some teams have a guy who collects the gear, washes it and gives it back to the riders to use for practice gear or, if its in good shape, the pants will get re-used with new jerseys. Some of it goes to various charities to be auctioned off. Some of it goes to mechanics who ride and need some new gear. And some of it ends up in a cabinet in the rider’s garage until it is old and out of style, at which point they’ll give a big garbage bag full of old gear to give away to a lucky neighbor. Hope that helps a little.

Thanks for watching/listening to the show!