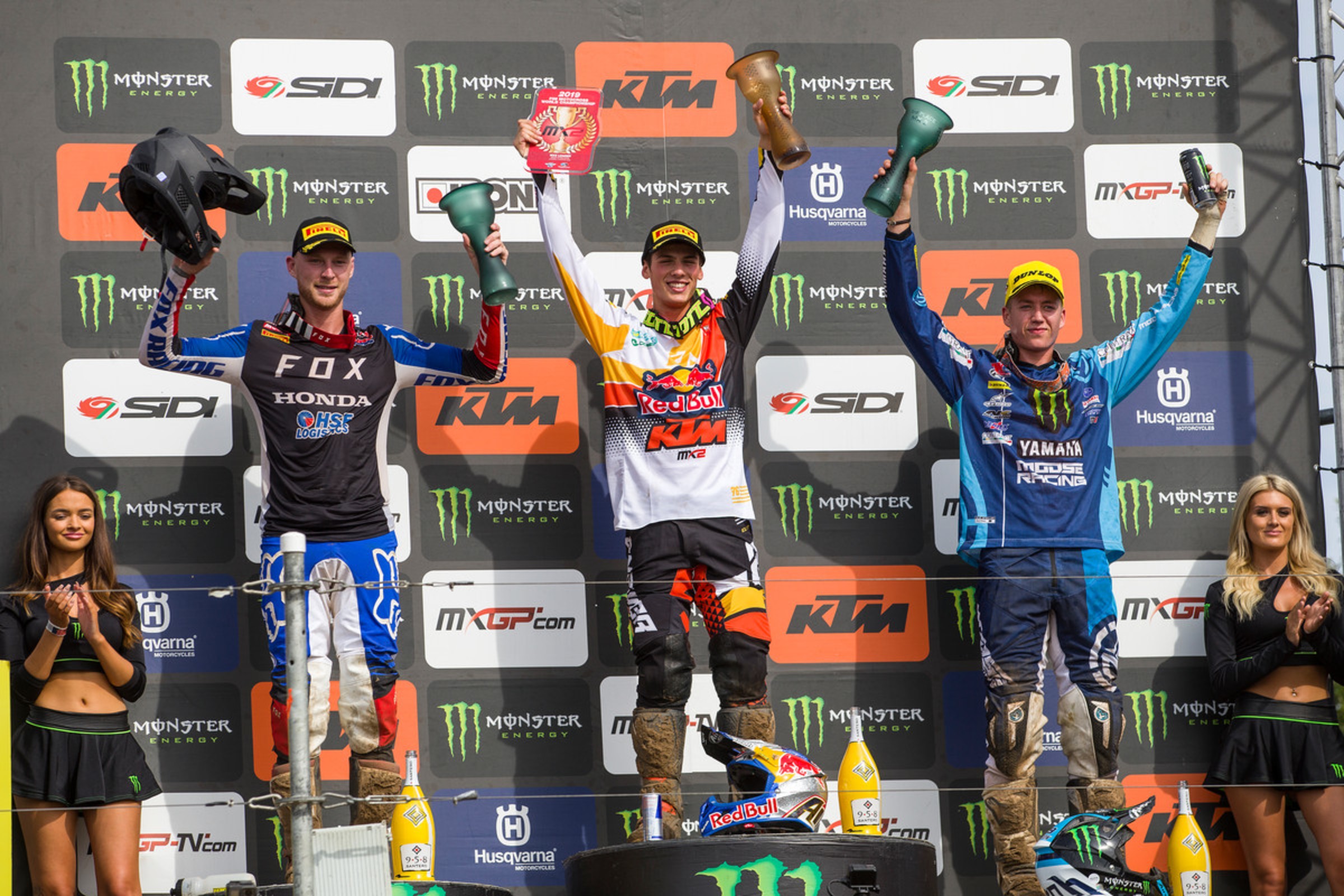 GP Report 4 Themes to Emerge from the MXGP of Belgium

The smell of fried food stands, burnt clutches, and the faint waft of sunscreen meant that MXGP was back in the rolling depths of the Lommel sand for the Grand Prix of Belgium and its traditional first weekend of August slot. The 14th round (of 18) of a rapidly dwindling FIM Motocross World Championship saw two riders who have already scooped 20 garlands between them in 2019—Honda HRC’s Tim Gajser and Red Bull KTM’s Jorge Prado—prevail again and their respective axes are poised to fall on the opposition for 2019.

1. Gajser on the verge

Gajser’s 2-2 was enough to skew the revival from Monster Energy Yamaha’s Romain Febvre, who had re-opened his MXGP account the previous week on the Loket hard-pack of the Czech Republic and swept confidently to the first moto in Belgium after he had studied and utilised the Slovenian’s lines while in pursuit of the CRF450R.

Febvre’s inability to break through the scrap between Jeremy Van Horebeek and Glenn Coldenhoff in the second race (and bump the Dutchman from third place in the final three laps) meant that Gajser could create a scorecard sufficient for his very first win at Lommel in seven years of Grand Prix participation. According to Youthstream, the overall win was also the first in the premier class for Honda at the venue. “It’s a special Grand Prix,” said the world champion-elect.

Honda were keeping one eye on Monster Energy Yamaha’s Jeremy Seewer, Gajser’s nearest pursuer in the championship. The Swiss looked loose and ragged at times but rarely makes costly mistakes. His consistency has pulled him up to second in the world in just his second term on a 450, although a mistake and DNF in Belgium would have allowed the HRC camp to celebrate early. Fourth overall for the Yamaha man was a good result but it only increased the formality for Gajser and co at the next round at Imola in Italy in two weeks. With a 187-point lead and only 200 left, the 22-year-old just needs to circulate and score at the showy temporary course.

“I don't want to change too much. I want to go with my ritual and train like normal,” Gajser admitted on the plan for a long 12 days until he can stamp his second MXGP crown and the third world championship of his career. “I feel good and really motivated. We still have four GPs until the end, and I will try to give my best every time I go out there.”

As a three-time MX2 winner at Lommel, Max Anstie was always going to be a name in the hat. Events at the Grand Prix almost summed up the 26 year old’s career: there were moments of unbeatable technical supremacy and brilliance with his Saturday qualification heat performance and second moto victory…but also poor luck with the first moto-first corner crash and DNF that left the Englishman with a sore right shoulder as well as moments of drama such as his hefty swap while leading the second race that meant he had to pick-up for the second time that day and work to relegate Gajser all over again.

Anstie’s acumen was clear however, and the checkered flag was long overdue for the Standing Construct KTM team. The impressive satellite crew toasted their first 2019 podium thanks to Coldenhoff’s determination to fill the final slot inside the top three. The 2018 Monster Energy FIM Motocross of Nations hero at RedBud has been playing catch-up for the majority of the season and, until Lommel, the team’s most notable achievement had been their efforts to help Ivo Monticelli progress from a rider fighting for top-15 results to one able to tussle with the finest of the factory stars.

It was a timely Grand Prix for the Belgian set-up with Team Owner Tim Mathys admitting that he still needs to confirm whether he can run three riders for 2020 and with Coldenhoff contracted, potentially leaving one of Anstie and Monticelli (and a number of other enquiring riders) in limbo. By early Monday morning, signs were a bit more positive for there being six-supported KTM 450 SX-Fs in the gate once more next year.

Another Team Manager, Team GBR’s Mark Chamberlain, was another watching with interest at Lommel. Anstie’s speed on the draining sand confirmed his status as the leading figure for the forthcoming annual event at Assen while the first 2019 podium appearance by Monster Energy Yamaha’s Ben Watson in MX2 (despite the protruding presence of a metal plate holding together the fifth metacarpal of his left hand) just about sealed his slot ahead of the recently sprightly F&H Kawasaki’s Adam Sterry. Jeffrey Herlings—still a week away from riding his Red Bull KTM—is already tipping the Brits as one of the heavy contenders on the Dutch course. RFX KTM’s Shaun Simpson meanwhile—the third natural pick for the team considering he was the winner at Assen for the inaugural Grand Prix in 2015 and has also conquered Lommel—struggled on Sunday. The Scot miss-stepped with set-up and was an example of how Lommel can drain and sap an athlete to the point of being a bystander. Simpson had proved his competitiveness with top five lap-times during practice and qualification in what was just his second GP back from a broken hand, but the fledgling British KTM team will have to ask serious questions of their work and approach to this flagship event.

Previous MXoN talisman, Tommy Searle, entered into the Kawasaki Racing Team’s mire of misfortune. Handed a factory KX450 with both Clement Desalle (broken leg) and Julien Lieber (broken elbow) recovering, the former world championship runner-up was nursing a fractured rib and sore hand from his fall in the Czech Grand Prix the previous Sunday. He was not in a condition to race but insisted the small gap to Imola would be enough to recover sufficiently and to approach what might be the final appearances of a Grand Prix career that began in 2006 as a 15-year-old with the best possible equipment.

Jorge Prado’s surging numbers are now making inroads into the record books. His MX2 Grand Prix hat-trick at Lommel was the 13th set of spoils of the season—meaning he is still unbeaten—and his 12th in a row, equalling the totals posted by Jeffrey Herlings in 2014 and 2016. Two more wins will see the 18-year-old eclipse his KTM teammate’s milestone of 14 on the bounce from his mighty 2013 campaign. Eleven of Prado’s triumphs have been forged with 1-1 results with the same kind of template seen at Lommel: holeshots, escapes, and race management. Prado did miscue on the last lap in the sand and momentarily dropped his KTM, but a lead of 30-odd seconds meant he could have posed for a selfie and still met his customary date with the checkered flag.

MX2 has unquestionably been a non-contest this year. Prado has made a similar impact to Herlings and should become KTM’s third MX2 back-to-back champion this decade after the Dutchman and Marvin Musquin, but the ease of his control and the level of domination means that the Spaniard has placed his name in the pantheon of 250 greats.

“For sure it is not boring for me: every race is a challenge!” he said with a smile. “I have always tried to improve and progress this season. Maybe days like today when I get a big gap of over 30 seconds in the second moto people can say it’s boring. But they also don’t show me on the TV! Every time I watch the race back it seems like I am never on TV. I think a maximum of two laps each time.”

Ah, the price of success.

Behind #61, the MX2 class continues to churn out unexpected results; indicating that 2020 could be open warfare between the riders sifting for scraps from Prado’s plate of ‘Jamon.’ Watson was the tenth athlete to spray champagne in 2019 and Honda HRC’s Calvin Vlaanderen was a surprise runner-up considering his seventh place from the first moto. The South African/Dutchman showed his sand capability by running closest to Prado in the second outing (Team Holland must be iron-on favorites for the Chamberlain Cup at Assen). A scary crash for Rockstar Energy Husqvarna’s Thomas Kjer Olsen pushed the Dane down the top ten and Monster Energy Kemea Yamaha’s Jago Geerts should have claimed his sixth podium with a 2-2 but his YZ250F expired in the second moto with three laps remaining.

Names like Geerts, Watson, Red Bull KTM’s Tom Vialle (a very decent fourth overall), Jed Beaton, Maxime Renaux, and exciting Dutch talent Roan Van de Moosdijk (vanquisher of the EMX250 round at Lommel with the F&H Kawasaki) hint at a competitive future for the category as the latest wave of riders to hit 23 and needing to find MXGP saddles in a limited paddock of opportunity begins to hit home. For the likes of Sterry (second in the first moto) Henry Jacobi, Brian Bogers, and Vlaanderen, the Grand Prix was the last time they’ll experience Lommel on a 250.

After Czech Republic and Belgium, MXGP breaks for a week before another back-to-back salvo and trek across Europe with races in Italy and Sweden. Announcements for 2020 are already teed-up for Imola in a fortnight with Yamaha supposedly making their sole three-rider team public and therefore allowing others to follow suit with their declarations; such as Kawasaki confirming the rumors around Romain Febvre’s transfer to green. HRC are expected to ‘promote from within’ for the second rider alongside Gajser and whether they will continue with an MX2 program has still to be confirmed. Still no word on whether Suzuki will start to race and effectively begin to market their off-road motorcycles once more although any resurgence from yellow will be 2021 at the earliest.