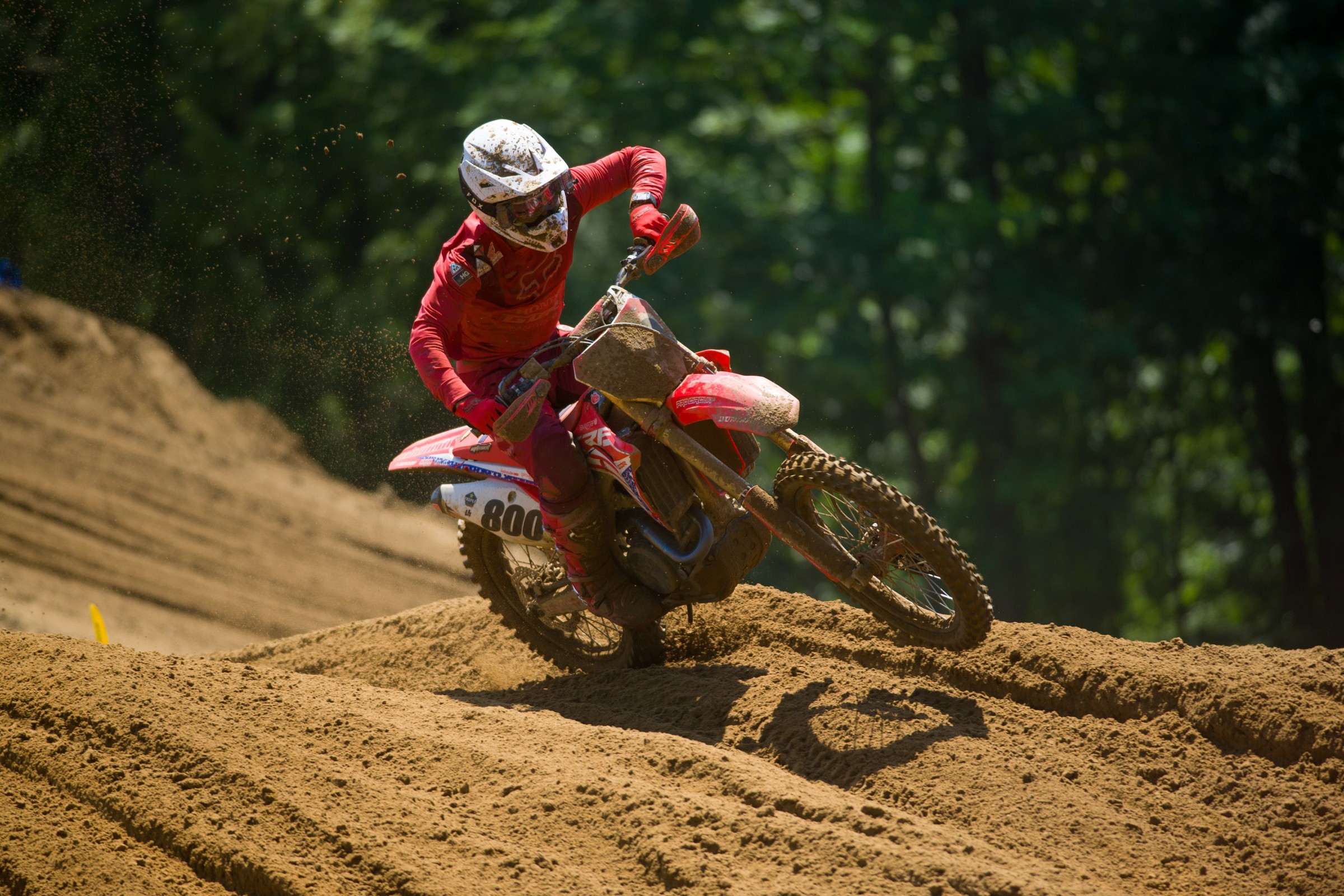 The Rockstar Triple Crown MX Tour up in Canada has hit the halfway mark with the completion of the Gopher Dunes National this past Saturday. Four rounds down, four to go up north and right now there’s a tie between GDR Honda’s Colton Facciotti and Rockstar Energy Yamaha’s Phil Nicoletti for the 450 Class title.

“Filthy” Phil has yet to win an overall, but he’s gone 3-2-6-2 so far while the defending champion Facciotti (looking for his sixth Canadian title) has gone 2-1-2-4. Of course, that third race took place in Manitoba and only featured one moto due to muddy conditions. Nicoletti was in a podium spot with a couple of laps to go when he crashed and dropped back, otherwise he’d have the lead.

We were going to get a quote from Phil but he would just complain about not having any wins, the cancellation of the second moto in Manitoba, and then he’d have to go outside to take an Instagram photo of himself drinking a Rockstar so we decided to not get him on the line.

Phil’s been pretty good on tracks he’s not ridden before, plus he actually seems to be enjoying himself this season. There’s also a Grand National Championship of sorts up there with a four race Arenacross counting as well as a three round “supercross” series following the conclusion of the motocross portion. Facciotti didn’t race that portion of the series so if you combine all the points, Nicoletti is leading that with KTM’s Cole Thompson 14 points back.

Facciotti has had his usual consistent season going but his performance this past weekend was a bit of a puzzler. On his newly hometown track in the deep sand, he could only muster a 4-4. This weekend’s race at MX 101 is again deep sand so this coming weekend will be big for the defending champ.

By far the most shocking ride of the series happened this past weekend when GDR Honda’s Mike Alessi crushed everyone in the sand going 1-1 on the day. Alessi’s other overall finishes have been 4-4-9, respectively, so this kind of came from nowhere. Maybe the sand helped? With more sand this weekend, the #800 looks to be getting hot at the right time. Interesting that Mike’s under the same tent as Facciotti but uses different suspension and motors than Colton; he’s got close to a bike that Justin Brayton uses at SmarTop/Bullfrog Spas/MotoConcepts Honda.

Matt Goerke, the two-time 450 Class champion, has been having a miserable time to start the series despite taking the win in the mudder in Manitoba. Goerke went DNF-DNF this past weekend with bike issues, he rode uninspired at the opener, he’s got a broken finger, and his first year on the Huber Kawasaki team hasn’t worked out so far. He’s eighth in the points with nowhere to go but up.

Shawn Maffenbeier’s back in the 450 Class as Nicoletti’s teammate and has been okay to start the year. Some good, some bad and he sits fifth in the points with the just-freed Cade Clason in sixth on this SKY Husqvarna.

In the MX2 class, if he hasn’t crashed or been docked spots for pinning it off the track markers, GDR Honda’s Dylan Wright has been the fastest guy. He’s more consistent than ever and despite just the one win (this past weekend) he’s got a 14-point lead in the class. Wright’s always has speed but he’s toned it down a bit (not perfect yet) to reach the potential many have seen from him. He also proposed to his girlfriend this past weekend after the win so what a day for him!

The defending champion in MX2, KTM’s Jess Pettis, came into the series hurt and with very little time on the bike so he really needed the three-week break after the first three rounds. He’d gone 7-3-11, respectively, before finishing a strong runner-up in Gopher. He’ll just continue to get better but he’s 25 points down on Wright due to the slow start.

The surprise of the MX2 series has been American Marshal Weltin who had the red plate for a couple of weeks. Weltin was a late entrant to the SKY Husqvarna team, and to the series in general, but the American has been fast and consistent in his rookie season in Canada.

MX 101’s Luke Renzland won the mudder and had some bad luck at round two but he’s also got a couple of podiums to go with the win and he sits 30 points back of Wright after four rounds. Luke’s a good sand rider so expect to do well this weekend. He’ll also probably get hired away by another team in 2020 because that’s what happens to Hot Dog Vendor’s riders over the years. He’s one of four riders within a moto lead of MX2 which is refreshing to see. This class is as deep as it has been in years.

Tyler Medaglia dropped back down to MX2 for his Huber Kawasaki team when they needed a rider and it hasn’t been as smooth as he or others thought it would be. Tyler’s a two-time MX2 champion and won a 450 overall last year but to start the year he’s had garbage starts, crashes, and probably some other things I can’t remember hold him back. He did get a strong second in a moto this past weekend and this weekend’s track is one he grew up on and has 80 bajillion laps on so he’ll be strong. T-Dags sits fourth overall after four rounds and this makes Gauldy a sad panda for sure.

Josh Osby has been up in Canada before and has been fast so to see him in the mix hasn’t been surprising. He won the opener then had terrible races in the mud and this past weekend. Still, he has the potential to win any weekend. He’s up in Canada with the Traders Racing/ClubMX/Redemption Racing team with Skip Norfolk working as the crew chief.

That’s a brief round up of the series halfway through this thing. Buckle up, just eight motos left in the series and then onto the three round supercross series!

Can Facciotti win another title before he hangs it up at the end of the year? Can something actually go right for Phil? Can the “Marty” of Canada in MX2 make a run? Does Wright finally reach his potential?