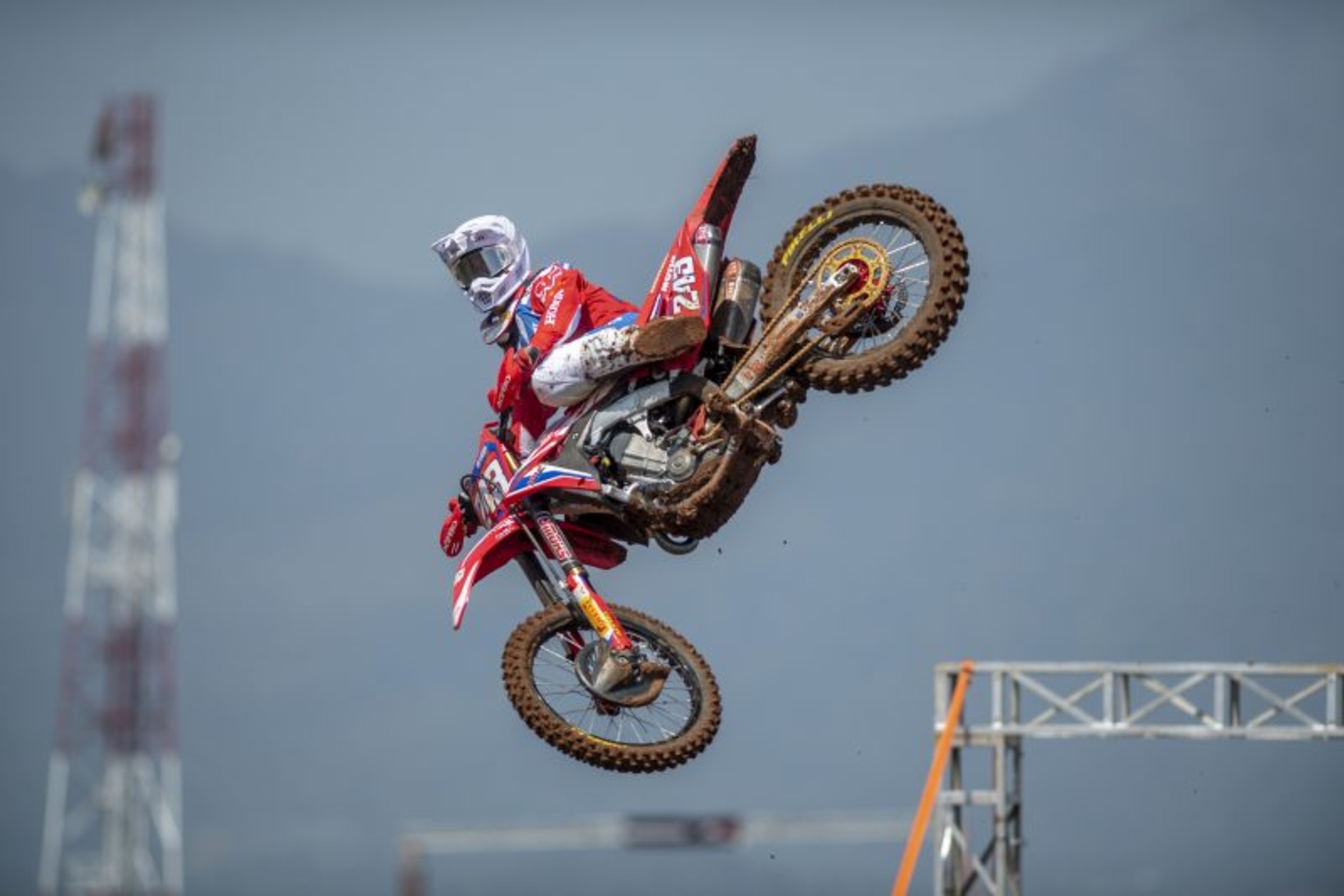 MXVice.com is a great website to get deep into the action of the MXGP circuit. Following this weekend’s Grand Prix of Asia, Vice’s Lewis Phillips caught up with several of the top riders, including runaway MXGP points leader Tim Gajser of Honda HRC. The interview is below, and be sure to check out the site for more angles and insights from the race.

By the way, Gajser is interested in taking another shot at Monster Energy Cup this year. Read on below.

MX Vice: Another race and another win. Extended your points lead by however much. It is way over a hundred now, which is great. Everything is going well. There is nothing to complain about. This is just perfect. If you dream a season up, this is it.
Tim Gajser: Exactly. I do not know what to say. Just unbelievable. I am feeling so good on the bike and so comfortable. With the team… We work really, really good together. It is a perfect combination. I could not wish for a better season. Winning seven in a row now is just unbelievable. Hopefully we can continue that roll. I am feeling good. I will give my best to continue that roll.

How would you describe your comfort level this weekend compared to, say, Palembang? Did you feel even better and even more comfortable on the track? Was this one maybe a little harder for you?
Racing both motos was, let's say, easier. Anyway, in Palembang there the track was tight. It was really small and narrow. Actually, you did not have the time to breathe. Here with the bigger track you have more air time. The speed was higher, big straights and everything. I felt like I was training today, especially second moto. I was just cruising and having fun out there. I found some really good lines, really smooth and fast lines. I was able to make a nice gap, like nine seconds or something like that, and control the race. I was really happy.

There was one little blip in your weekend. Last lap of timed practice, you went down in the corner before the uphill waves and tweaked your ankle a little bit. Just talk about that, how bad it was, whether it bugged you today and all of that.
I was really scared, especially when I crashed. I could not even stand on the ankle. It immediately felt really warm inside. I had so much pain. I was like even crying under my helmet, because I was knocking on my head. "Why did I need to push so hard?" I was second anyway. It was easy to make a mistake on a track like that, because it was really slippery. You can really see you maybe thought that you have a lot of traction, but there was no traction at all. I lost the rear tire on the take-off, got sideways and hurt my ankle really bad.

Huge thanks to our physio, because we worked really hard. He treated me really good all weekend after the crash and even between the motos to get the ankle as good as possible. It was definitely… Yesterday in the qualifying race I felt sore. I was not relaxed. I was not myself, so that is why I did not push so hard and I settled for third place. Today the ankle felt better, so I could really push in the first moto with a great start and, like I mentioned, make a little gap and control the race. In the second one I had to fight for it. My start was not the best. I was third and then made quick passes in the beginning of the race, made a gap and controlled the race. Overall, I am basically really happy. Going home from Indonesia with two GP wins. The most important thing is to be safe. I am really happy to go home.

Is the ankle one of those things where you may need to rest a little bit this week and make sure that it is all good? Is there nothing to worry about at all now?
I think our physio made such a good job. I will see tomorrow. Definitely it is going to be a little bit sore after the races, but anyway I think it is nothing too crazy. I will be able to train normally during the week when I get home.

You are a hard-pack guy. Everyone knows that. All of the riders I have spoken to tonight have said this track was too much hard-pack. You have got France. You have got Germany. They are hard-pack tracks. This is another level. Being a hard-pack specialist, did you like it? Did you think the soil was a bit meh?
Like I said, you really had to be careful with the line selection also. You had to follow the racetrack during the moto, because where everybody was riding it was getting harder and harder and then really slippery. We had to move a little bit to the side to not go in that main line. It was really, let's say, difficult for thinking. Anyway, like all the others said, it was not a proper hard-pack track, like France or somewhere else.

Those tracks are hard-pack with stones, but you have a lot of traction as they rip and they water the track. It is really good grip. Here, especially in the second moto, I did not feel any traction in any of the corners out there. The ruts were just so deep, so you could really go into the rut and squeeze the throttle. All of the other corners were flat without any ruts, so it was really a struggle. It was really important to be smart and not push too much.

Speaking of the track, I feel like they listened to you guys last night. You, [Jorge] Prado and some others were complaining about the watering. They watered the take-off of the big downhill triple, but it seemed like that part was better today maybe.
Yeah. Let's say that they made a great job. It is not easy to keep up with the track during the day, especially with so many races and so many bikes on the track. We also had the Indonesian championship and everything. Let's say that today was a better track. Especially in the second moto they opened up some corners like where they made three lines completely outside, a middle line and inside.

You have some line selection and it was easier to pass. It was brutal, definitely. I can imagine also for these guys from Youthstream who are preparing the track, it was not easy. For someone it was okay, but for someone [else] it was not okay. Saying about the riders. You cannot really make everyone happy. It is always like that but, overall, it was okay.

Every rider is different, obviously. Some people like to ignore the points. They do not want to know. Have you looked and seen how early you could potentially win the championship? I’m not going to say it, in case you do not want to know, but it is early.
I don't know how much it is now, but I know the points lead is really big.

I can tell you, if you like.
How much is it?

If things keep going like this, you may win it at Lommel.
No way!

Yeah. I feel like I have brought good news. This is why you do interviews with me. I bring good news. Lommel, which is basically in the middle of the season… There could be a championship banner there.
Yeah. To have such a great season… It did not come easy. We were struggling and having tough times with the team. With myself, I did not feel myself and now I am really happy for everyone. For me, for the team, for all the Slovenia, for everyone… We really work hard. When we were struggling, the goal was to come back to where we were before.

I think we are now twelve GPs in, but we have already had so many wins and so many wins in a row. I am so happy. It is tough to describe how happy I am at the moment. Hopefully, like I said many times, we can stay on two wheels and carry that momentum to the next rounds in [the Czech Republic] and then Lommel.

When things go well, teams tend to let you do stuff that you want to do. They are a bit nicer to you. It is getting to that point in the year where we ask about the Monster [Energy] Cup. Is that even a discussion? Are you even thinking about that?
Definitely I am thinking about that. Yeah. I think it is not official already, but I think we are going to do it this year if everything goes on the plan. I really enjoyed it in 2017. I did not feel the best. I was not in good shape. If we can carry that momentum to the Monster Cup, with some good preparation, I think I can go good on the supercross [track] as well.