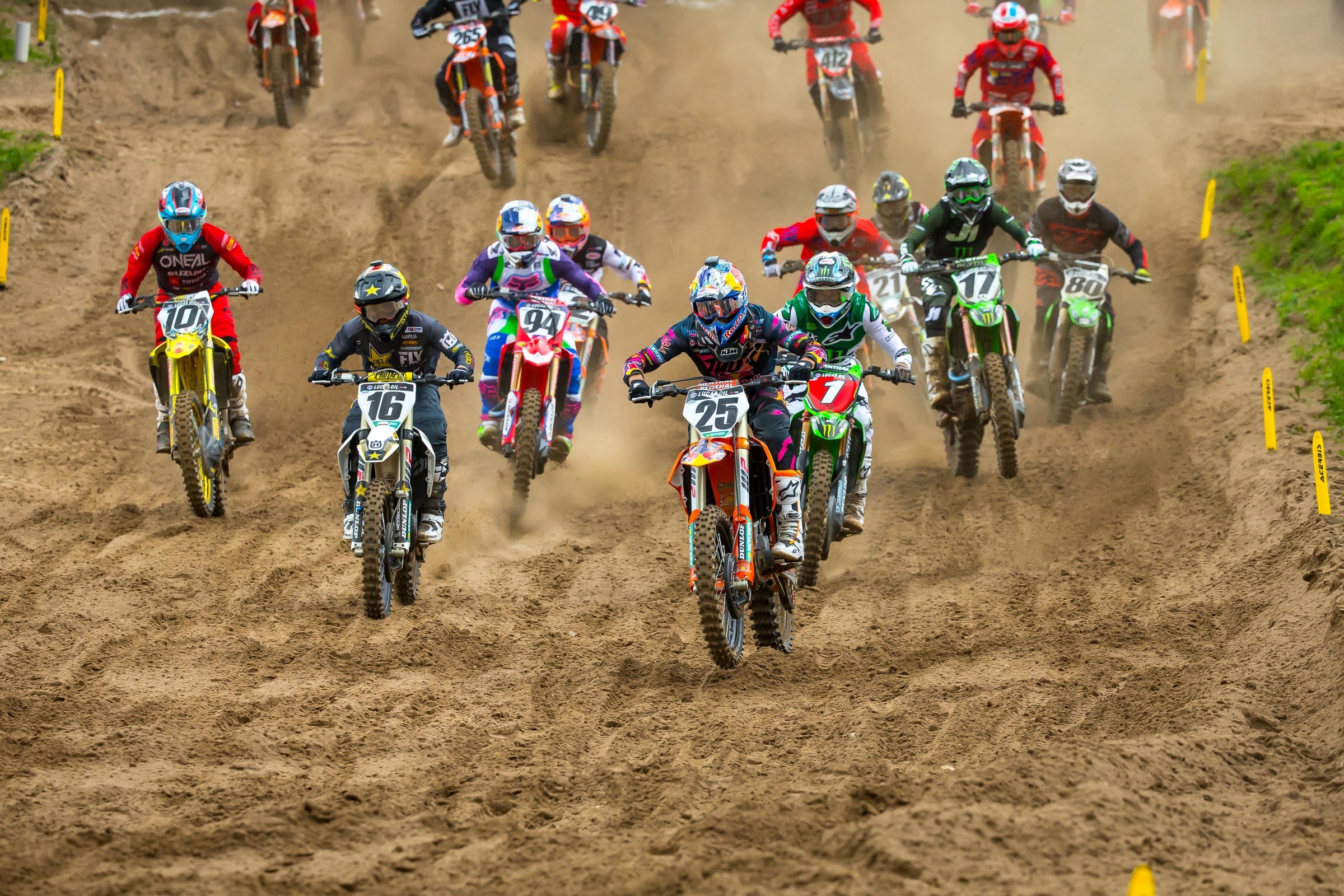 Motocross is awesome. How do we know? Because on summer weekends there are fans at the fence, waving towels, cheering their favorites, and getting close to the action. The lucky ones even get down to the podium and get sprayed some champagne. Few sports let you get this close to the action, and few sports offer this much action to get close to.

Is that not awesome?

We’re so deep inside of this sport that we often take the good stuff for granted. So let’s get ramped via this reminder of what’s going to be great this weekend at RedBuuuudddd!

A healthy 450 field: Eli Tomac, Ken Roczen, Marvin Musquin, Blake Baggett, and Cooper Webb haven’t missed a race this year, and the Lucas Oil AMA Pro Motocross Championship pack has been bolstered by Zach Osborne and Jason Anderson. This provides a weekly recipe for incredible racing, especially in the early laps when these top-dog 450 boys are at full send. In most years, we’d be happy with merely a two-rider duel for race wins, but this year we’re literally seeing a five pack (or more) trading blows in the early laps. Remember years like this the next time someone starts dominating. The summer of 2019 is what we’re always dreaming of!

AC’s On Again: America loves a comeback, so America has been bracing for Adam Cianciarulo’s comeback story. Each time the friendly Floridian starts to get the mojo working, though, something derails him (usually a crash). Finally, finally, finally the summer of 2019 is looking like the picture we’ve envisioned, with Adam finally back in control of his powers. Can he finally complete the deal and get that elusive championship? His performance this weekend will go a long way toward writing this story.

Battlers: The record shows Cianciarulo with five wins in six races, but the season hasn’t felt as dominant as those numbers indicate. Teammates Justin Cooper and Dylan Ferrandis still have hope that the second half of the year—and the title—will swing their way. Further, the 250 Class is always packed with ambitious talent that will empty the tanks if they can get a start and zero in on a win or podium. We can celebrate this year’s deep 450 field, but in the 250s, freight trains at the front are just standard fare.

Fighters: Cooper Webb and Jason Anderson have yet to notch 450 Class overall wins in their careers, but it’s not from lack of trying. Anderson’s aggro riding style practically screams EFFORT, and when someone is trying to pass him, he’ll make their life miserable (especially if it's Eli Tomac). This year Webb has gone from a career so-so starter to the best launcher in the game, and while he hasn’t quite had the outdoor pace to turn those holies into Ws, he doesn’t fizzle when under attack. You might make the pass, but you’ll have to earn it. Expect to see both of these riders up front at some point this weekend, and then, get ready for the fireworks.

Puncher: As competitive as the 450 Class has been this year, there's always the threat of Eli Tomac going into "Beast Mode." When the points got close late last season, Tomac started digging out moto wins in spectacular fashion, taking seconds per lap out of his competition. There's a high level, but then there's next level. Tomac can go there at any time.

Blitz: We don’t know where Ken Roczen will be, physically, this weekend, but even in the diminished state we’ve seen in the last three motos, he’s capable of amazing things. Ken’s first-lap speed has been otherworldly in several motos this year. If you’re watching, don’t blink when you get a glance at the 94. He’s watching a rough motocross track through a completely different channel, seeing lines, momentum, and opportunity when others merely see a bunch of bumps. It’s beautiful to watch.

LaRocco’s Leap: It’s an indicator of hard-core motocross fandom that the most famous obstacle in all of American motorcross isn’t named after a GOAT like Carmichael, a King like McGrath, or a Hurricane like Hannah. Nope, LaRocco’s Leap is the trademark of the working man, Mike LaRocco, not only a local Michiana hero but a rider respected for his blue-collar, no non-sense, no BS work ethic. No one worked harder than Iron Mike, and with his terrible starts, no one made it harder on himself! Mike was no talk and all action, however his legacy will get some words this weekend via the limited-edition LaRocco's Leap Light beer being served on premises, and a live edition of The Whiskey Throttle Show with GL and Ping over at his jump on Friday night. Mike doesn’t like to talk, and was never really one for beer, either. That’s okay. LaRocco’s Leap speaks volumes.

That Podium: As round seven of a 12-race Lucas Oil Pro Motocross Championship, RedBud is called the centerpiece of the series, and the centerpiece of the track is the podium, literally (it’s located dead center). During the motos, fans at RedBud gravitate toward two sides, the off cambers on one end, and LaRocco’s Leap at the other. By the day’s end, though, all sides converge to form a massive crowd and create massive noise in front of the day’s top performers. RedBud is the only podium where riders can’t even hear themselves think, overwhelmed by the hellacious cacophony created by the RedBud diehards. At this race, the fans are as much a part of the show as the racers.